Inflation is coming and it will have a major effect on the world economy and financial markets. This is one of the factors that will drive gold to levels which few can imagine today. Later in this piece, I am discussing 10 Factors which will make gold surge.

Markets are expressing no fear and seem very comfortable at or near all-time tops. There is no concern that stocks are massively overvalued or that bond rates are at historical lows and only have one way to go. Nor is anyone worried that house prices are at levels which most people can’t afford. Money printing and interest rate manipulation has created such cheap financing that most people don’t look at the price of the property but only at the financing costs. In many European countries, mortgages are around 1%. At that level the monthly cost is negligible for many people. Neither the banks nor the borrowers worry about interest rates going back to the teens as in the 1970s.

So whilst we are waiting for markets to wake up from the dream state they are in now, what signals should we look for and what about timing.

These are the areas that we see as critical and below are our near term and long-term views on:

Interest rates – Only one way to go

Interest rates are critical to a world with $250 trillion debt plus derivatives of $1.5 quadrillion and global unfunded liabilities of 3/4 quadrillion. Minor increases in rates will have a catastrophic effect on global debt. Derivatives are also extremely interest rate sensitive. Also, derivatives represent an unfathomable amount that will blow up the global financial system when counterparty fails.

The very long interest rate cycle bottomed a year ago. Since the dollar debt is the biggest, dollar rates are the most important to the world. The US 10-year Treasury bond bottomed in July 2016 at 1.3% and is now 2.3%. US rates have turned up from a 35-year cycle bottom and are likely to go considerably higher into the teens or more like in the 1970s. This could be a very slow process but we could also see a rapid rise. As the 10-year chart shows below, there was a rapid rate rise into December 2016. The 10-month correction finished in early Sep 2017 and a strong uptrend has now resumed. 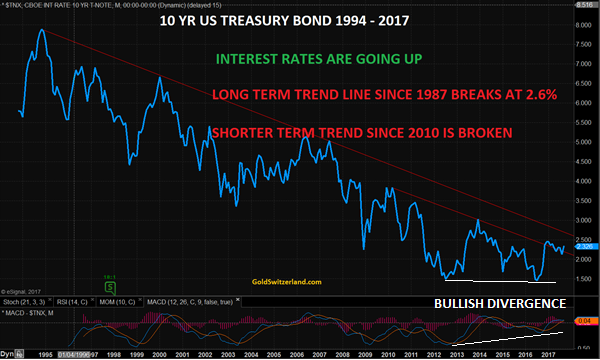 In summary interest rates bottomed in 2016, right on cue as that was the end of the 35-year cycle. The trend is now up for a very long time. This is initially linked to a rise in inflation and will later on be fuelled by a collapse of bond markets and hyperinflation.

Inflation – On the rise

There are many ways to measure inflation. We can take the official government figures which are manipulated and lagging the real economy. US CPI bottomed in 2015-16 at 0% and is now 2%. If we take the Shadowstat figures, real US inflation is nearer 6% and in a clear uptrend. 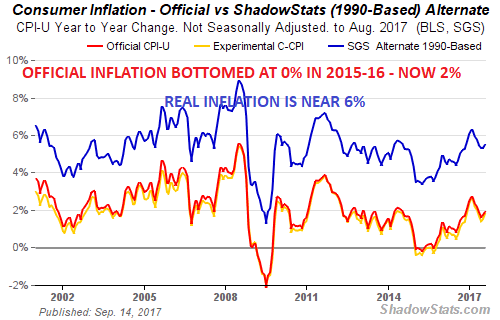 But there are better global indicators for inflation that can’t be manipulated. The CRB (Commodities Research Bureau) index crashed by 50% from 320 in 2014 to 160 in early 2016. That was a significant bottom and the CRB is so far up 15%. 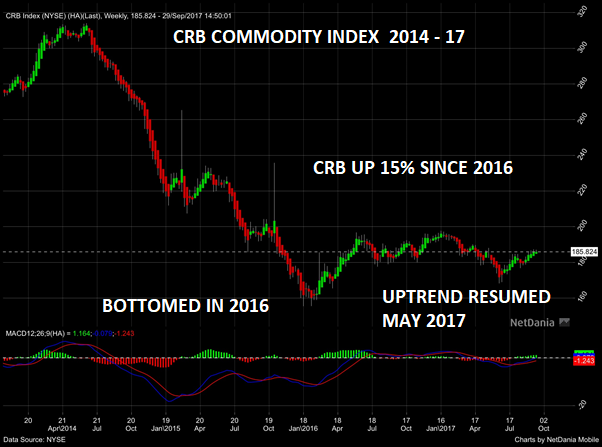 The S&P GSCI Commodity index is heavily linked to energy and shows an even stronger inflationary trend with a rise of 43% since Jan 2016. 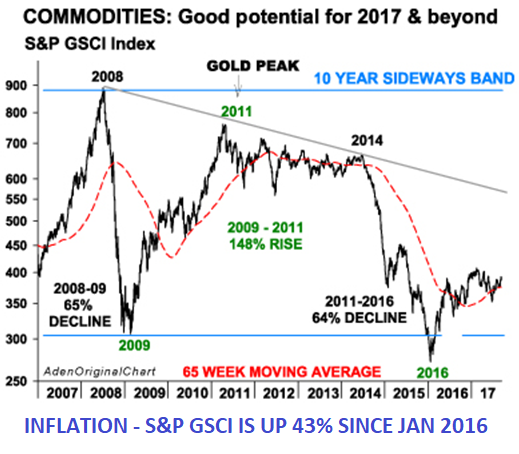 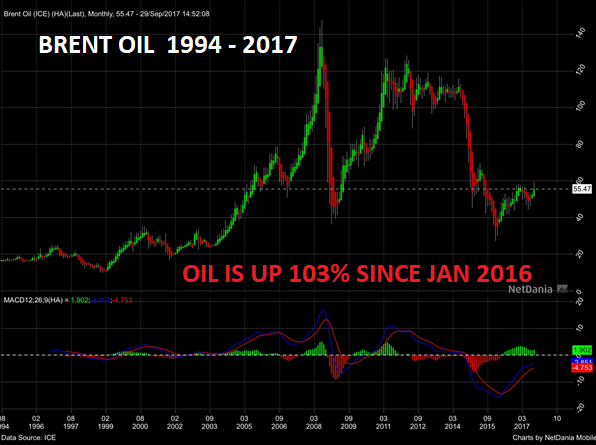 So whether we take US CPI, various Commodity indices or oil, the trend is clear. They all bottomed around the beginning of 2016 and are now in clear uptrends. This is a strong signal that inflation has bottomed and is likely to increase substantially in the next few years, eventually turning into hyperinflation.

US Dollar – Downtrend will accelerate

The dollar has been in a strong downtrend since 1971 when Nixon ended the gold backing. This was a disastrous decision for the world’s financial system and for the US economy. It has led to a total collapse of the dollar and a financial system based on debt only. The US economy as well as the world economy now rests on a bed of quicksand. The primary reason why the dollar has not totally disappeared yet is the Petrodollar system. This was a clever devise by Nixon’s team in 1974 to agree with Saudi Arabia to sell oil in dollars and to invest the proceeds in US treasury bonds and in the US economy. Saudi Arabia would also buy US weapons and receive protection by the US military. This is what has created a massive demand for dollars globally. But this will soon come to an end with China and Russia introducing an alternative to oil trading in dollars. This will eventually lead to the total demise of the dollar. 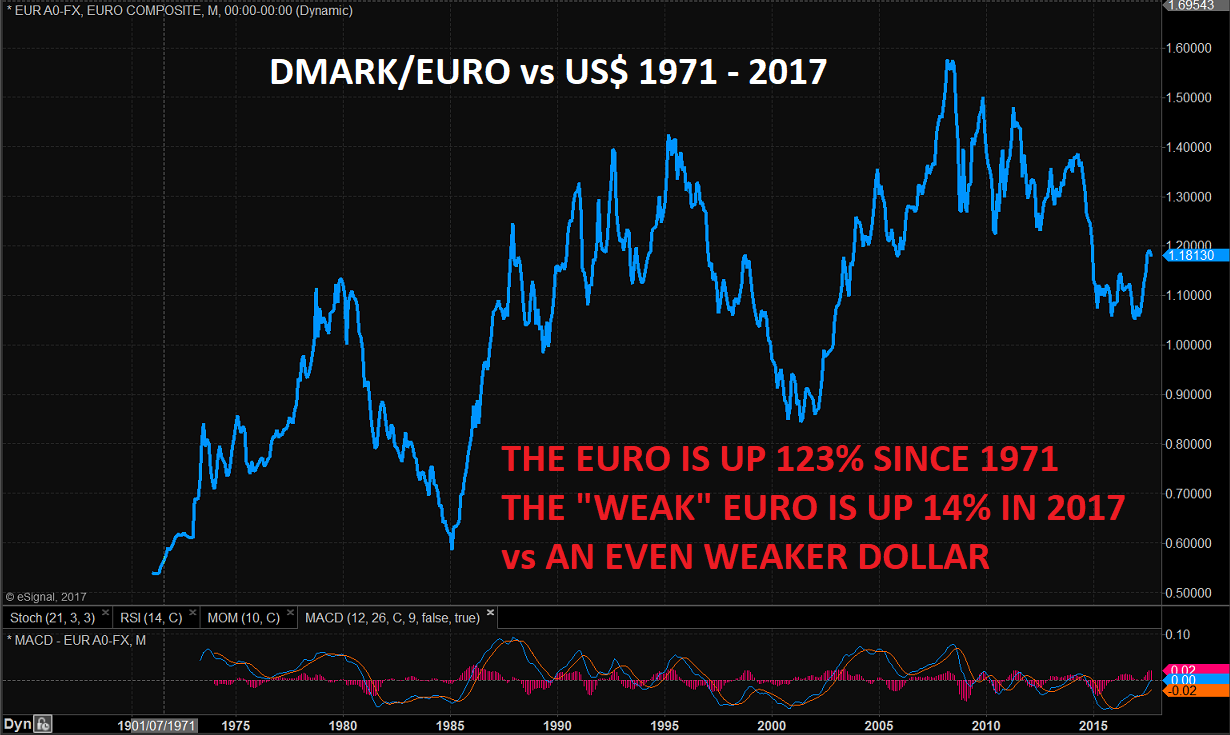 We might see temporary dollar strength for a while after the strong fall this year. But the downtrend is very clear and the dollar will at some point within the next few months accelerate down very strongly. The Petrodollar is soon dead and so is the US dollar. The consequences will be disastrous for the US economy and will also lead to a rapid acceleration of US and global inflation.

Stocks – Bubble can expand but will burst

Most stock markets in the world are at or near all time historical high. The significant exception is Japan which peaked in 1989 at 39,000 and is now, 18 years later, at half that level.

The most massive credit expansion and money printing in history has done very little for ordinary people but it certainly has fuelled stock markets around the world. On most criteria, stock markets are massively overvalued, whether we take price earnings ratios, market value to GDP, to sales or margin debt. Stock markets are now in bubble territory and very high risk.

But there is a big BUT! Because bubbles can get much bigger than we can ever imagine. The trend is clearly up and there is nothing today indicating that this trend has come to an end. Normally at market peaks, we see broad participation from retail investors. Normally stocks only turn when everybody has been sucked in. But we are certainly not hearing ordinary investors talking about how much money they are making today in tech stocks like they did in 1998-9. The Nasdaq is up 5x since 2009 just as it was at in the 1990s. The big difference today is that smaller investors are not participating. That may be one of the reasons why this market will go a lot higher. Stock markets peak with exhaustion and we are still not at that stage.

Higher rates will initially make investors more bullish about a strengthening economy. And as bonds decline with higher rates, investors will switch from bonds to stocks. Eventually higher rates will kill the economy and stock markets. But not yet. So we may still see much higher stocks for yet some time and well into 2018. There will of course be corrections on the way there.

But there is one major caveat. This latest phase of the long bull markets in stocks has lasted for 8 years already and on most criteria, it is very overbought and high risk. When the market turns, we will see the biggest bear market in history. The coming fall will be much greater than the 1929-32 crash of 87%. Thus, Caveat Emptor (Buyer beware)!

In summary, stocks can go a lot higher but risk is extremely high.

So with rising stocks, rising interest rates and a falling dollar how will gold do? That is a very easy question to answer. Just like with commodities, as I have discussed above, gold and silver resumed the long-term uptrend in January 2016. There are a number of factors that will fuel gold’s rise to levels that very few can imagine today.

10 reasons why gold will surge:

The above 10 factors are neither based on hope, nor fantasy. It is not a question if they will happen but only WHEN. In my view, these events will take place within the next 5 years and most probably faster than that. The compound effect of these 10 factors should push gold up at least 10-fold. 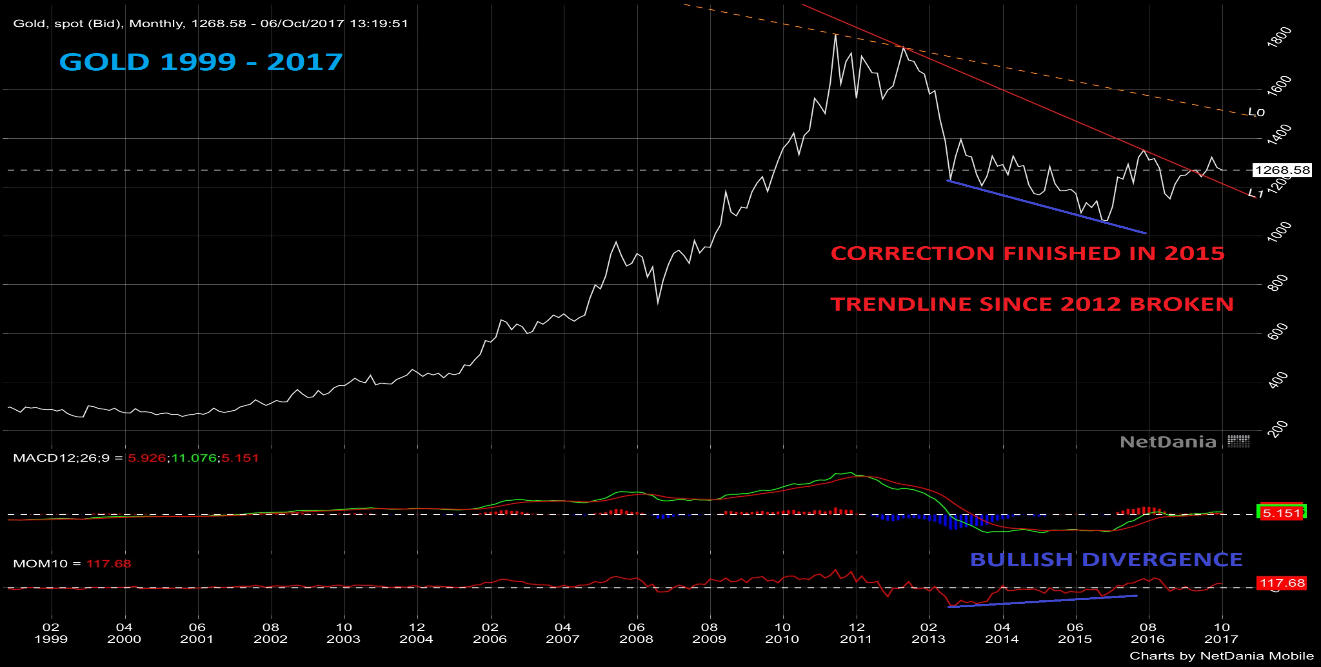 So if you don’t own physical gold or silver, buy some now at these ridiculously low prices and store them safely outside the banking system. If you do own sufficient physical precious metals, just relax and enjoy life, knowing that you are well protected against coming catastrophes.