A stock market collapse and surge in gold is imminent
What will be the trigger?

At last we are here. It has been a long wait for gold and silver holders. For the wealth preservationists who have held gold/silver since the beginning of the 2000s, it has just been tedious since the highs in 2011. What has happened in the last four years in the world economy has confirmed the importance of capital preservation. But for precious metals investors who came in nearer the top, it has clearly been a nerve racking time.

Whenever you invested in gold or silver won’t matter in the next few years. Because we are likely to very soon start the rise of the precious metals that in all likelihood will lead to new highs by 2016 or maybe even before.

Governments are destroying the value of money

Since 2008 central banks, governments and commercial lenders have been competing in throwing cheap or free money at the world of an unprecedented magnitude. They have increased world debt in the last 7 years by almost 50% to nearer $ 220 trillion. So that is a fresh $ 70 trillion that has been created from nothing. No goods were produced, no services were provided against these $ 70 trillion. Money is supposed to be a medium of exchange and a store of value. It does act as a medium of exchange today but since governments are determined to mismanage the economy and to issue fresh money whenever they run out, it is the most useless medium of exchange imaginable.

That automatically deals with the point of money NOT being a store of value. As long as the world has irresponsible governments, and that is the rule rather than the exception, then money will never be a store of value. So paper money, although convenient, is useless as a medium of exchange for normal people. For governments it is a convenient short term method for buying votes. For savers it has been a disastrous store of value but for the wealthy and the risk takers it has been a marvellous way of multiplying wealth using leverage and debt.

$ 500 million for an apartment and a painting

But back to today. In my view the 100 year experiment of central banking and fractional banking system has now come to an end. The financial system almost went under in 2008. But by issuing $25 trillion in loans and guarantees, central banks staved off a disaster temporarily. That money gave the banks a short term lifeline but did nothing to solve the problem. For a privileged few people all this printed money has created a massive increase in wealth with bubbles in stocks, bonds and property. Apartments in London, New York and Monaco can be bought for a bargain price of around $ 200 million and paintings by Gaugin, Cezanne or Picasso for $200-300 million seem to be a bargain that can be bought with just a nod. So you can get an apartment in London with a painting for a steal of just $ 1/2 a billion. When I started my working life you could buy a major corporation for that kind of money.

So we live in an unreal world with unreal prices based on unreal (fake) money. And this is why it will all come to a very abrupt end. That time could start now at any time. Fundamentally it must happen. Every single major government is running deficits and increasing debts exponentially. The US hasn’t had a budget surplus for over 50 years and has no intention of repaying the debt. Similar with many nations. I cannot for the life of me understand how any investor can buy government bonds at zero percent yield that will not and cannot ever be repaid with real money. The only way to repay the debt is to print more money but that will make the debt larger and not smaller and also make the money worthless.

Will Deus ex Machina save the world?

The world has never before in history been in a position when all economies are bankrupt simultaneously. The debt and deficit trap exists in every major nation, Japan, Europe, USA, China and all emerging markets. And that is why the coming collapse will be “The Great Financial Disaster”. There will be no government and no power that can save the world. Well the only one would be Deus ex Machina but I doubt that will happen. 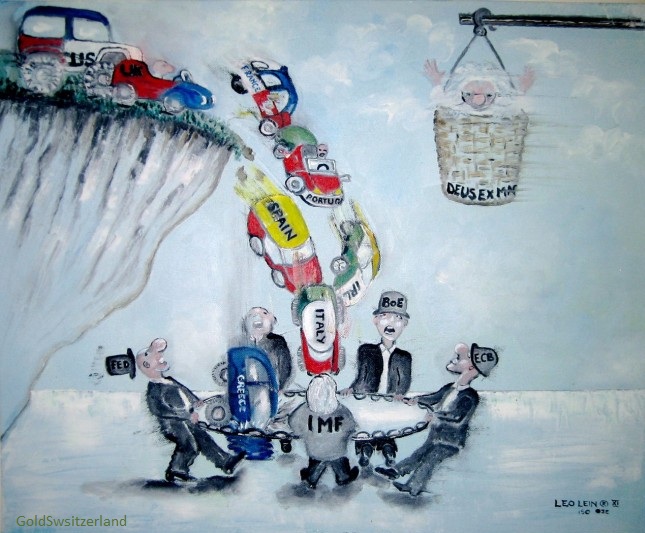 Stocks could fall 25% in the next few weeks

Thus fundamentally the collapse must happen. It is only a question of when. Fundamentals don’t help us with timing but technicals and cycles can do. There is now a confluence of these indicators that point to an imminent fall of stock markets of probably 20-25% worldwide. And that is just the beginning. Before the biggest debt and asset bubble in history has imploded totally, we could see stocks down 75-95% and many bonds becoming worthless. But that will take a few years, maybe 5-6 and maybe longer.
What the trigger will be is of course impossible to say. With a fragile system in disequilibrium, very little is needed. It is that last snowflake that creates the avalanche. Will it be a bank going under, bad economic news or a catastrophic geopolitical event? All are possible.

With unprecedented risk in the world, wealth preservation will be critical to avoid a total destruction of assets. The likely scenario in the next few years is initially massive money printing worldwide in a futile attempt by governments to save the world. But that will fail this time. We have reached a point when it is not possible to push on the string any further. The coming colossal money printing will lead to hyperinflation first. But as soon as the world will discover that, what caused the problem cannot also be applied as the remedy, there will be a deflationary implosion of assets and debts.

Physical gold and some silver stored outside the banking system will be one of the few ways to preserve wealth. Since the peak of silver in April 2011, we have seen a 72% decline. Gold has “only” declined by 44% since the peak in September 2011. In the precious metals mining stocks, there has been a real massacre. The HUI or Gold Bugs’ Index declined a massive 84% from the 2011 high to the recent low.

Buying precious metals will not just preserve wealth in the next few years but is likely to yield a very high real return. My target for gold, when we invested in 2002, was already then $ 10,000 in today’s money. But since I believe we will have hyperinflation, the actual price could be considerably higher. That would give silver a potential target in today’s money of $ 500. Silver is of course much more volatile therefore caution is required. Many gold and silver miners could go up by much more than ten times. But remember that stocks are not wealth preservation like physical gold or silver and therefore much more risky in the ensuing economic environment.

The coming years will not be easy. I wrote an article a few years ago called “The Dark Years Are Here” and I now really think they are imminent. These will be difficult times for most of us. At least the privileged few who have some savings have a chance to preserve these by owning physical gold and silver.