The dollar is dead but the world doesn’t know it.

It has been a slow death and the final stages will be very painful for the US and for the rest of the world. The US empire is finished financially and militarily.

Nixon was convicted for the wrong crime

It all started with the establishment of the Fed in 1913 and escalated with Nixon. For anyone old enough to still remember him, they will think about the Watergate scandal. This was corruption and bribery at the highest level in the Nixon administration, including the president himself. In order to avoid impeachment which would have been a certainty, Nixon resigned. All this broke out 11 months after Nixon’s disastrous decision to take away the gold backing of the dollar on Aug 15, 1971. Nixon should not have been impeached for the Watergate scandal but for his decision to end the gold backing of the dollar. That disastrous decision is what will lead to a total collapse of the world economy and the financial system, starting sooner than anyone can imagine.

By 1971, the US had already been running chronic budget deficits for 10 years consecutively. At the end of the 1960s, President Gaulle of France realised what would happen to the dollar and demanded payment in gold instead which was his right. This led to Nixon closing the gold window since this was the only way that the US could continue to live above its means. And this is exactly what the US has done for more than half a century now. Not only have they run a real budget deficit every year since 1961 but also a trade deficit every year since 1975.

Three things have allowed the US to do this: 1) The dollar being the reserve currency of the world, 2) The Petrodollar system. 3) Having a mighty military machine.

But the rest of the world now knows that the weakening US empire is losing out on all three fronts. The dollar has lost 50-70% against most major currencies in the last 46 years. And against gold, nature’s only permanent money, the dollar has lost 97% since Nixon’s fatal decision.

The US military superiority has been crumbling for many years. In spite of a military spending higher than the next 8 biggest countries together, the US has not been successful in any military action for decades from Vietnam, Afghanistan, Iraq, Libya and many, many more. This weakening of the US military power, will make it impossible in future to enforce the petrodollar. The US attacks on Iraq and Libya were as result of these countries intention of abandoning the petrodollar.

China and Russia are now seeing what de Gaulle saw in the late 1960s. They know that it is only a matter of time before the dollar will lose its status as reserve currency. They also know that before this happens, the dollar will start crumbling and eventually disappear into a black hole resulting in an implosion of all the dollar assets and debts.

China and Russia will orchestrate the end of the dollar

China and Russia are not waiting for this to happen They are actually going to orchestrate the fall of the dollar. Not by attacking the dollar itself but by killing the petrodollar. China will start to trade oil in yuan with Russia, with Saudi Arabia, Iran, Turkey etc. All these countries are now negotiating a number of agreements to facilitate the trading of oil and other commodities in yuan and rubles. These agreements cover a wide area such as new payment system and Forex trading between Russia and China as well as gold imports by China from Russia.

The intention of the Trump administration to repudiate the Iran nuclear agreement and to impose new sanctions will further strengthen the resolve of these countries to abandon the petrodollar. Sadly, it is also likely to lead to yet more terrorism in the West.

This is all happening at a much faster pace than the world is realising. And this time, the US cannot do anything about it. Because the US is unlikely to attack, China or Russia or Iran. A US attack with conventional weapons on any of these countries would be guaranteed to fail. The US wouldn’t stand a chance except in a nuclear war which would be the end of the world as we know it. 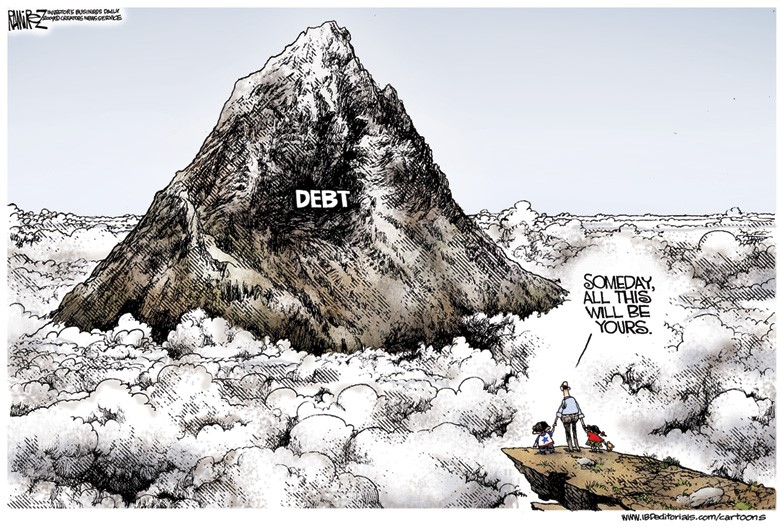 But it is not only the US empire which is crumbling. The decadent socialist system in Europe will not survive either. Socialism works until you run out of Other People’s Money. And this is happening fast in many European countries. Greece is totally bankrupt and should have defaulted on their debts many years ago and introduced a new devalued Drachma. This is the only way that Greece can ever progress and prosper. Instead, the EU insisted on them staying and imposed yet more loans that Greece will never repay leading to massive poverty and misery for the Greek people.

In addition, Brussels has forced them to process a massive number of migrants which Greece can ill afford. The same goes for Italy with their massive debt to GDP and crumbling economy. But it doesn’t stop there, Spain, Portugal, France, Ireland and the UK are all economies with massive debts. Since these debts can never be repaid, there are only two alternatives; either a default by the ECB and most European countries or money printing on a scale that the world has never seen. The likely outcome is that we will see both options. First money printing by the ECB in the €100s of trillions and then default, as the Euro becomes worthless.

The Eurocrats in Brussels including the European Commission are only interested in protecting their own position. Their main concern as unelected and unaccountable representatives of 500 million people is to hold their empire together at any cost. What they are doing is not for the good of the European people, but rather to serve these bureaucrats’ self-interest. The Brussels elite is more concerned about their own massive expense accounts and pensions than the Greek or the Irish people.

The saboteurs in Brussels

The European Commission in Brussels, with Junker leading, is now doing all they can do sabotage the Brexit decision by the UK electorate. They just can’t stand that anyone breaks rank in this very unholy alliance. Interestingly, the word sabotage, derives from the industrial revolution in Belgium when the workers threw their “sabots” (clogs) into the new machines that were taking their jobs away. So the Brussels tradition of sabotage is not a new phenomenon.

The EU – a failed experiment

The EU is a failed experiment that will eventually collapse. So will the Euro which is an artificial currency that can never work for 19 Countries with different backgrounds such as growth and inflation rates, productivity, industrialisation and cultures.

The dollar is likely to fall before the Euro as they both compete in the race to the bottom. Just think about it, here we have the two richest regions in the World, North America and Europe, both on the verge of collapse, economically, financially, politically and morally. How can anyone ever believe that all the bubble assets can survive under those circumstances. Well they won’t. That is absolutely guaranteed. It is only a question of how soon it starts and how deep it will be. The sad thing is that no one is prepared for it and it will be a devastating shock the whole world.

A world of lies

Having just flown from Europe to the US, I watched “The Wizard of Lies” the film about Bernie Madoff. This was a $65 billion Ponzi scheme that went on for at least 20 years without being discovered. The combination of gullibility (returns 10-12% every year without fluctuations), greed and vested interest led to very few ever questioning this massive fraud. Banks, brokers, asset managers, introducers and investors all loved it and therefore no one suspected foul play.

Just like the world never questioned the massive Madoff Ponzi scheme, no one ever questions the $2 quadrillion (including derivatives and unfounded liabilities) Ponzi scheme that the whole world is now involved in. Madoff was a saint compared to what the world is now being subjected to. So why is no one protesting and why does everyone believe that this will continue. Well, for exactly the same reasons that they believed in Madoff – Greed and Vested Interest. Governments, central bankers, bankers, fund and asset managers and investors don’t want anyone to cry wolf. The whole world wants this wonderful Ponzi fraud to go on for ever. But it won’t. Instead it will come to a very abrupt end in the next few years and no one will be prepared.

Investing with the herd – the road to the precipice

Currently investors love the stock markets around the world and why shouldn’t they. Everyone is making so much money, just like with Madoff, that their greed prevents them from looking at the risk.

For investors who don’t worry about risk, the current period is absolute heaven. Stocks, bonds, property and bitcoin just goes up and up and up. You just can’t lose! Whatever investors touch today turns into gold. But it isn’t real gold. The winnings today are fake gold in the form of inflated and heavily leveraged paper assets. Like all bubbles this can continue further. But whenever it turns, and we are not far from that point, the move in the opposite direction will be so fast that it will be impossible to get out. Also, like for most of the last 30 years, investors will be certain that central banks will save them. But this time it will really be different. Because the next round of trillions or quadrillions of paper money will only have a very short lived effect. At last the world will understand that printed pieces of paper that governments call money are really worthless.

Most investors will laugh at this in disbelief. We will see who has the last laugh.

The contrarian road to wealth protection

With Nasdaq up 5x since 2009, investors are oblivious of risk. Silver on the other hand is down 65% since 2011. The chart below shows the Silver / Nasdaq spread. Silver has crashed against the Nasdaq since 2011 and is almost down to the 2001 level when the silver price was $4. This spread is likely to have bottomed and the next move should be back to the 2011 high – a 450% move.

Wealth preservation investors should of course not go short Nasdaq (the bubble can get bigger) but if they get out of their stocks and buy silver, they are likely to avoid the most massive wealth destruction in the next few years. 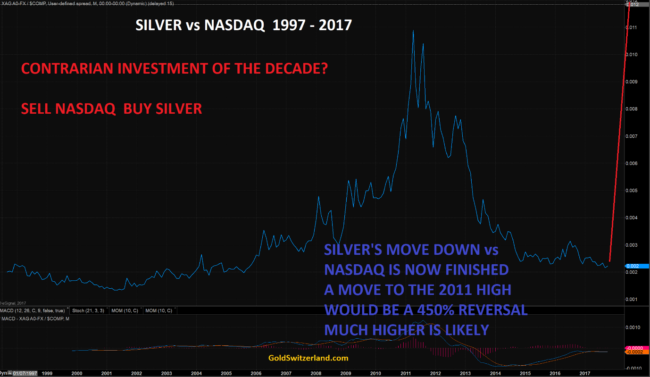 Bitcoin is continuing its meteoric rise and is almost at $6,000. This is a massive speculative bubble and like all bubbles, it can get bigger before it bursts. But this has nothing to do with wealth preservation. The price explosion in Bitcoin has been spectacular. Just in the last two years it is up 25x! Once gold and silver start to move, we are likely to see a similar price explosion. But the big difference is that the precious metals represent real wealth preservation and tangible wealth. 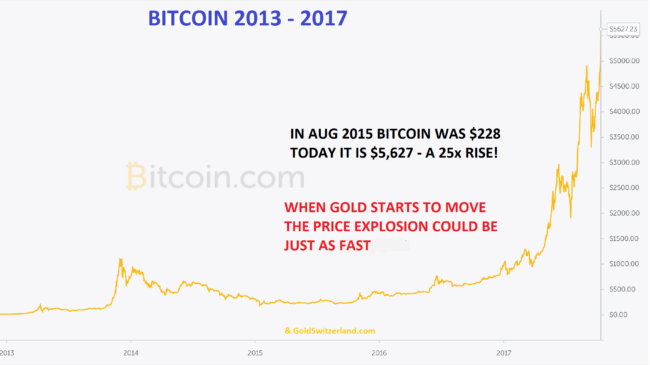 I might sound like the Roman Senator Cato who always finished every speech with “Praeterea censeo Carthaginem delendam esse.” – “Furthermore I consider that Carthage should be destroyed.”

I also always have the same message for an oblivious world which doesn’t realise what will hit them: