All investment avenues are now rigged

In the following special Matterhorn-Interview with the economist, book author, former assistant U.S. treasury secretary and newspaper columnist Dr. Paul Craig Roberts, financial journalist Lars Schall asked some basic questions related to the underlying causes of the financial/debt crisis. “I suspect that all markets, not only bonds, but also equity and bullion markets, are rigged in order to maintain the Fed’s low interest policy”, Roberts says.

Paul Craig Roberts, an outstanding American economist, has had careers in scholarship and academia, journalism, public service, and business. Today he is chairman of The Institute for Political Economy (http://www.paulcraigroberts.org). 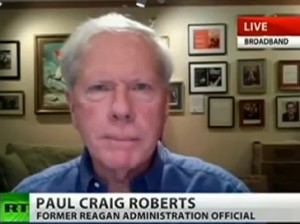 Dr. Roberts was educated at the Georgia Institute of Technology (B.S.), the University of Virginia (Ph.D.), the University of California at Berkeley and Oxford University where he was a member of Merton College. He has been associate editor and columnist for The Wall Street Journal and columnist for Business Week and the Scripps Howard News Service. In 1992 he received the Warren Brookes Award for Excellence in Journalism. During his time of public service he was as an Assistant Secretary of the US Treasury in the early 1980s. In January 1982 he resigned to become the first occupant of the William E. Simon Chair, Center for Strategic and International Studies, Georgetown University. He held this position until 1993. He was a Distinguished Fellow at the Cato Institute from 1993 to 1996 and a Senior Research Fellow at the Hover Instition, Stanford University.

Dr. Roberts has testified before congressional committees on 30 occasions on issues of economic policy. He has contributed chapters to numerous books and has published many articles in journals of scholarship, including the Journal of Political Economy, Oxford Economic Papers, Journal of Law and Economics, Studies in Banking and Finance, Journal of Monetary Economics, Public Finance Quarterly. He has written or co-written eight books , among them: “How the Economy Was Lost: The War of the Worlds,“ published in January, 2010 by CounterPunch/AK Press. In 1984 he published the widely reviewed and favorably received book “The Supply-Side Revolution.“

In 1987 the French government recognized him as “the artisan of a renewal in economic science and policy after half a century of state interventionism” and inducted him into the Legion of Honor. He is listed in Who’s Who in America and Who’s Who in the World.

Lars Schall: Dr. Roberts, why are we according to your analysis in a global financial crisis – and why do the populations of the Western hemisphere have to pay for the debt of the private banking sector?

Paul Craig Roberts: The financial crisis is not global. It is limited to the US and EU and to other countries whose financial institutions purchased more Wall Street junk and EU member country’s
over-issued sovereign debt than the banks that purchased these instruments can write off without becoming insolvent under the laws that prevail.

In the US the financial crisis was caused by the deregulation in the Clinton and George W. Bush regimes, beginning with the repeal of Glass-Steagall, which separated commercial from investment banking and continuing on with the removal on limits on debt leverage and the prohibition of the Commodities Futures Trading Corporation from regulating over-the-counter derivatives. The investment grade ratings that US rating agencies were paid to place on toxic waste was the prime factor in exporting the US fraud to the EU, where financial institutions purchased Wall Street’s toxic waste thinking it was investment grade instruments.

With their balance sheets already damaged by Wall Street’s fraud, the EU banks were then hit with two more crises: the sovereign debt crisis of the PIIGS and the lending crises from the country-specific real estate bubbles.

Western populations are being saddled with the banks’ losses either because they do not understand that that is what is happening or because they have not taken to the streets in sufficient numbers with sufficient ferocity to avoid the burden. A corrupt or stupid Federal Reserve permitted financial concentration to the extent that institutions “too big to fail” were created. To prevent failures regarded or claimed to be “catastrophic,” capitalism is no longer permitted to weed out failures in the financial sector. Instead, failed institutions are maintained with public subsidies as if they were socialized firms.

L.S.: Richard Heinberg told me once in an interview the following:

“Our current money system requires constant growth so as to enable repayment of the interest on the debts that created the money to begin with, so it cannot function well in the context of general resource scarcity and economic contraction.” (1)

Given the debt-based money system, isn’t this maybe the key dilemma of our time?

PCR: It is a problem, but one among many. We have also, for example, the offshoing of US middle class jobs which has dismantled the ladders of upward mobility in “the opportunity society,” sent US incomes and GDP to China, and caused Federal Reserve chairman Alan Greenspan to substitute an expansion in consumer debt for the missing growth in consumer income in order to keep the economy growing. Indeed, without the offshoring of US jobs by US corporations and the offsetting growth in mortgage and consumer debt, there would have been no financial crisis as the Fed would not have created the credit and real estate bubble that led to the mortgage-backed derivatives.

The largest problem that humanity faces is the exhaustion of nature’s resources.
Extractive rates are exhausting fisheries, timber, water, and other resources. The soil itself is at risk, and the sinks for waste disposal are filling up. The external costs of GDP growth–for example, the dead zones in the Gulf of Mexico killed by runoff from chemical farming–might now exceed the value of the increase in GDP from the activities. Jarad Diamond’s book, Collapse, shows the lessons that governments everywhere are ignoring at the dire peril of their populations.

L.S.: Do you think the gold market is a free market – that is, free of government sponsored interventions via Western central banks / bullion and investment banks?

PCR: I suspect that the Federal Reserve is manipulating the gold and silver markets in order to prevent its low interest rate policy from undermining the value of the US dollar. It is easy to offset rising prices of bullion due to physical demand by selling shorts in the paper market.

L.S.: Is a free market possible with “the invisible hand“ of the Plunge Protection Team?

PCR: I suspect that all markets, not only bonds, but also equity and bullion markets, are rigged in order to maintain the Fed’s low interest policy. In the July issue of Gerald Celente’s Trends Journal, I point out that all investment avenues are now rigged.

Consider, for example, the bullion market. If gold and silver prices had been permitted to continue their 2011 rise, the corresponding decline in the value of the dollar would have affected the price of debt instruments, and the Fed would not have been able to keep bond prices high in the face of dollar decline. All indications of moves away from the dollar, whether stock market declines or rise in gold and silver prices, are offset by purchases of stock index futures or by shorts of bullion.

L.S.: What are your thoughts related to the Trans-Pacific Partnership (2)?

PCR: My analysis of the TPP is available here: http://www.paulcraigroberts.org/2012/07/02/trans-pacific-partnership-corporate-escape-from-accountability/.

L.S.: Is the mainstream journalism – and in particular the one dedicated to finance – in a deep crisis of its own?

PCR: Outside the Internet, which varies greatly in its reliability, there is no journalism, financial or otherwise, in the US, and because of the US influence, very little journalism in the UK and Europe. Gerald Celente, of the Trends Research Institute calls the media “presstitutes.” And with good cause. The media serves as a propaganda ministry for the lies and deceptions of the US and its NATO allies.

L.S.: Thank you very much for taking your time, Dr. Roberts!