As the world is standing on the precipice of a total breakdown, both economically and geopolitically, an obvious question is: “Where is the money coming from” to save the world from perdition. The same question was asked to Maharishi Mahesh Yogi in the 1970s when he was starting a global spiritual project. Maharishi was the founder of Transcendental Meditation and known as the Guru of groups like the Beatles and Beach Boys. When asked “Where is the money coming from”, he replied “from wherever it is now.”

That principle would work well in a system of sound money. Money would flow to sound investments and causes. But the financial system has not been based on sound money for a long time. Instead we have false money – money which is fabricated by central banks and commercial banks. This money has zero value and is backed by nothing, zilch, nada! So governments and individuals have spent money that doesn’t exist. This is why the world is sitting on a debt mountain including derivatives of around $2.5 Quadrillion.

The world is now facing the risk of a total breakdown of the world economy and the financial system as I outlined in my article last week. The article covers the reasons for the monumental change the world will soon experience.

WHERE IS THE MONEY COMING FROM

As banks collapse, governments default, companies go bankrupt and individuals become destitute, “Where is the money coming from” that will save the world? There are only two possible sources:

Thus there is no acceptable solution.

THE FRAUD WILL SOON BE REVEALED

As the financial system implodes, there will initially be unlimited money printing by central banks, but this time it will have no effect. The world will finally realise that creating wealth by putting ink on pieces of paper, or pressing a button to fabricate trillions of dollars or euros is a massive fraud. This fraud has been going on for most of the last 100 years but ordinary people will soon learn the hard way how governments have ruined their lives and the world economy.

The current fragile state of the world and the dire consequences of the coming breakdown would never be printed in a newspaper, nor discussed on television. Ordinary people, indoctrinated by governments and the media are as bullish today as they were in 1929 before the crash or the crashes of 1973, 1987, 2000 or 2007. Nobody understands that the world is facing insurmountable problems that can no longer be repaired by corrupt hocus pocus wizardry. Virtually nobody will prepare for the imminent collapse. This is because neither the so-called experts, nor ordinary people can see or understand the risks. Then there is also the belief that governments will save the world once more by flooding it with printed money.

So where is the money coming from for:

These are just some of the areas which will be affected. Still, the magnitude of the problems is so enormous that it will change the world for a very long time.

The world has had many crises of various degrees in the past, be it the Black Death in the mid 1300s when an estimated 75 to 200 million people died in Europe and Asia. Around 50% of Europe’s population is estimated to have perished. In WWI around 20 million people died and in WWII around 60-80 million. So major catastrophes are part of history and the coming one could also see a major reduction in world population be it from economic crisis, famine, disease, social unrest or war. 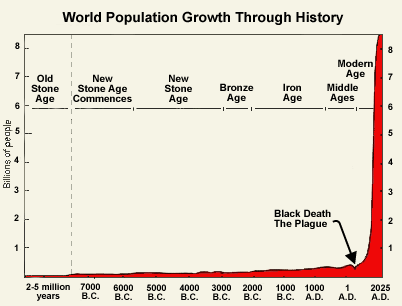 From the mid 1800s to today world population has grown from 1 billion to 7.6 billion. If we look at the graph it is a straight spike up in the last 170 years. From a technical perspective, spikes up are always corrected by a spike down. We can’t tell when exactly that spike down will come but it is likely to be connected to the coming collapse of the financial system. A reduction in global population of 3-4 billion in the next few decades is a real possibility.

Another risk which will materialise at some point is the change in polarity of the North and South Poles. This normally happens every 200,000 to 300,000 years but the last time was 780,000 years ago. The earth’s magnetic field has weakened 15% in the last 200 years and that is a strong indication that a flip is due. Recent satellite data from the European Space Agency also indicates that a flip is imminent. The problem with a flip is that it would make some areas of the world inhabitable by knocking out the power grids. People would also die from much higher radiation.

In addition to the insoluble economic and financial problems in the world, the geopolitical situation is now so serious that we might not need to worry about the economy. The West led by the US seems determined to push the Russian bear into a corner. A threatened Russian bear is a very dangerous animal. Let us hope that the West comes to its senses. Otherwise we might have a war with very, very severe consequences for the world.

All this might sound very pessimistic and it would of course be the biggest disaster that the world has experienced. I am certainly not a pessimist by nature. All I am doing is analysing the facts and the risks and these clearly point to a major change in the world in coming years. I sincerely hope my predictions will not come to pass. Because if they do, there could be suffering on a scale that humanity has never encountered before.

The combined risks of economic collapse and a world war is not at all reflected in markets. The investment world is much too lethargic and doesn’t realise how quickly fragile asset markets will crash.

Jonathan Ruffer, one of the UK’s top fund managers, who correctly predicted the recent share sell off, has said that it was only a taster and that he is confident an “earthquake” will hit markets “within months”. (The Telegraph April 12, 2018)

So that was a lot of “bad news” in one newsletter. But it is no use worrying about things we can’t do anything about. Nobody can fix the broken world economy. It is much too late for that. And nobody can stop the polarity flip. Also, it will be impossible to protect yourself against a world war. But if we “only” have an economic collapse, physical precious metals is the best insurance.

But what we can do is to take some steps in our little micro worlds. For the fortunate ones who have some savings, there is still time to protect against the unprecedented economic risks.

The trends that I have been forecasting for a while in my newsletters are still intact: 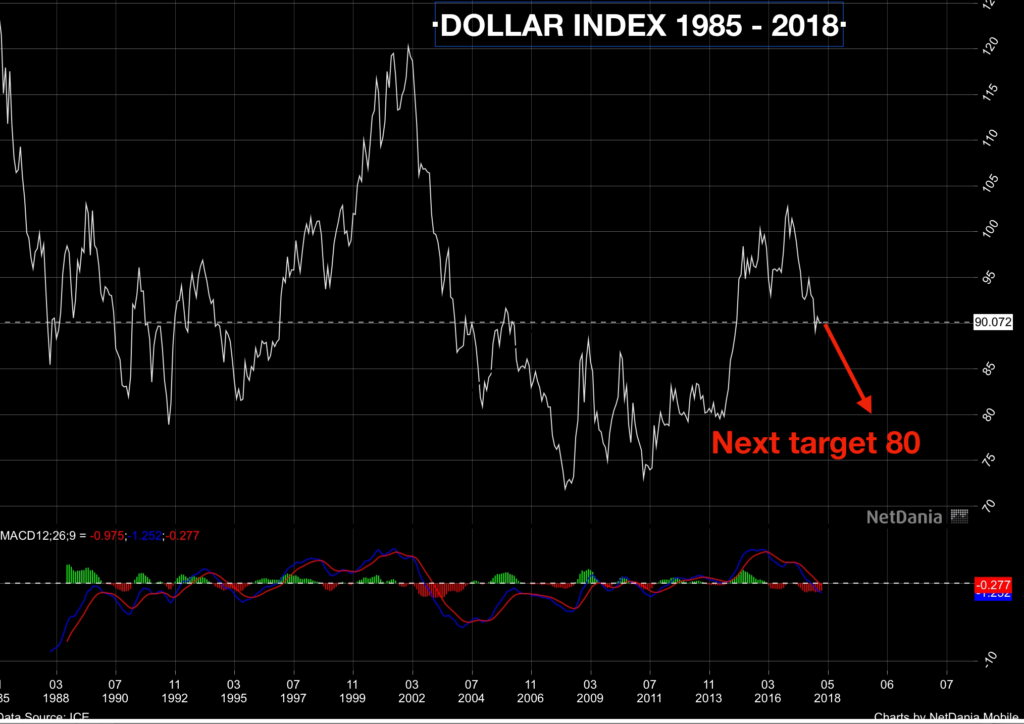 Gold and silver are now breaking out and on their way to new highs.

So get out of stocks, dollars and debt. Buy precious metals mining stocks. But remember that they are held within the financial system (if you don’t go for direct registration). Thus you are subject to custodial and counterparty risk.

The best form of wealth preservation is physical gold and silver stored outside the banking system. There is no better way to protect your wealth against the risks I have outlined above.