Welcome to 2018 – a year that will be the culmination of at least 105 years of mismanagement of the Western financial system by governments, central bankers and the elite.

2018 will be a year of major volatility in many markets. Stocks are now in a melt-up phase and before the major bear markets start in virtually all countries around the world, we are likely to see the final exhaustion moves which could be substantial. The year will also be marked by inflation increasing a lot faster than expected. This will include higher interest rates, much higher commodity prices, like food and oil as well as a falling dollar. And many base metals will strengthen. Precious metals finished the 2-3 year correction (depending on the base Currency) in 2015 and are now resuming the move to new highs and eventually a lot higher. More on this later. 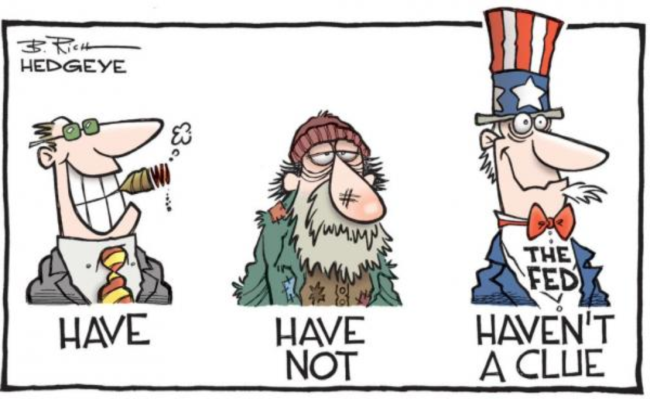 For a century, a reckless elite has controlled the system for their own personal gain and thus accumulated massive wealth. Ordinary people have been totally cheated into believing that they have benefitted by having all the material things that most of them can’t afford – be it a house, car, computer or iPhone. All on credit of course.

Whilst the elite owns most of the assets, ordinary people own the debt. Not just their own debt but also the public debt burden which irresponsible governments have built up including unfunded liabilities like pension and medical care. And when the financial system fails, ordinary people will suffer the most.

We have seen a century of debt buildup from virtually zero to $240 trillion. Global debt has doubled since the beginning of the Great Financial Crisis in 2006. This has led to asset bubbles and overvaluations never seen before in history. If unfunded liabilities and derivatives are included, the total burden amounts to $2 Quadrillion. 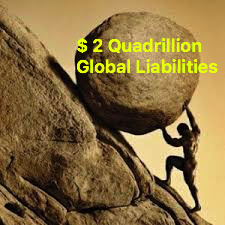 That is the enormous Sisyphean task that the world will have to struggle with in coming years. Although central banks and the elite seem clueless, they can clearly not be unaware of the gigantic size of the problem.

We know that these liabilities can never be settled. What happened in 2006-9 was only a rehearsal. In the last minute central banks orchestrated a massive rescue programme which included interest rate reduction, money printing, guarantees, liquidity injections plus allowing banks to value toxic debt at maturity instead of market. These measures temporarily postponed the inevitable collapse. They are unlikely to work next time but since the central banks have few other options left, they will try the same things again. But this next time they will fail. 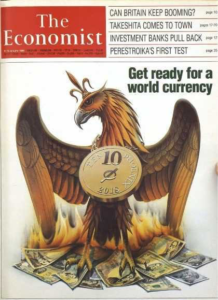 In my mid December article I discussed a new Phoenix world currency based on cryptocurrency technology and the likelihood of governments introducing such a system. This would have the benefit of fudging the fact that fiat money is worthless. The new “money”, based on crypto technology, would have a fake value which would make it hard to relate to the “old” currency. The same happened when the Euro was created. Also, just like existing cryptos, the value would be inflated massively through manipulation as well as by demand from a gullible public. Governments would use this new office cryptocurrency to divert attention from the insoluble global debt problem.

The governor of the Bank of England (BoE), Mark Carney, has just declared that the BoE is seriously considering introducing an official cryptocurrency in 2018 already and also that the BoE is in discussion with other central banks on this matter. The BoE has worked on this project since 2015. The technology was tested satisfactorily in the summer of 2017 according to Carney. He stated: It is a most interesting application that is beneficial for financial stability and efficiency. He also said: “We are on the case”. It obviously has nothing to do with financial stability since another fiat currency, this time electronic, can only very temporarily conceal that the world is bankrupt.

So it is clear that central banks, as I discussed in my last article, are already on the case for some time and see official cryptos as a solution to the global debt problem as well as the perfect way to control money. Through manipulation they can easily create unlimited cryptos and hype the value. They can also electronically totally control individuals’ money and their transactions. This is the perfect Big Brother system and thus another frightening attempt to severely limit the money and freedom of individuals.

It is now very likely that Western governments will attempt to introduce such a cryptocurrency system in the next few years. There could be a USCrypto, EUCrypto and a UKCrypto etc. It is also possible that there will be a SDCrypto (Special Drawing Rights).

CHINA AND RUSSIA HAVE DIFFERENT PLANS

But there will be many obstacles since it is extremely unlikely that countries like Russia and China will accept a US, EU or UK cryptocurrency. These countries understand that all the new fake cryptocurrencies would be just as worthless as the currencies they would replace. China and Russia have a very different plan. They will introduce a gold and oil backed (crypto)currency which will be far superior to any new money that the West would produce. With this currency, China and Russia will become the dominant economic powers as the West declines into obscurity.

These major changes in economic trends clearly don’t happen quickly but over an extended period. Nevertheless, 2018 is likely to be a significant year, marking the beginning of the end of the latest, but certainly not last, corrupt financial system which has lasted 105 years. 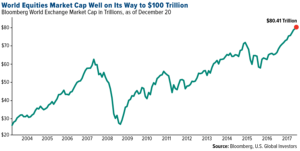 On virtually any criteria, stocks worldwide are now massively overvalued and a very dangerous investment market. But that wont stop this market to reach even dizzier heights before it collapses. Global equities were valued at $25 trillion in 2008. Today they are at $80T. Will they reach $100T before the collapse?

What has been driving stocks since the 2009 bottom is clearly a massive expansion of debt. Investor credit and margin debt are now at historical extremes and far worse than in 2000 or 2007 as the chart below shows. 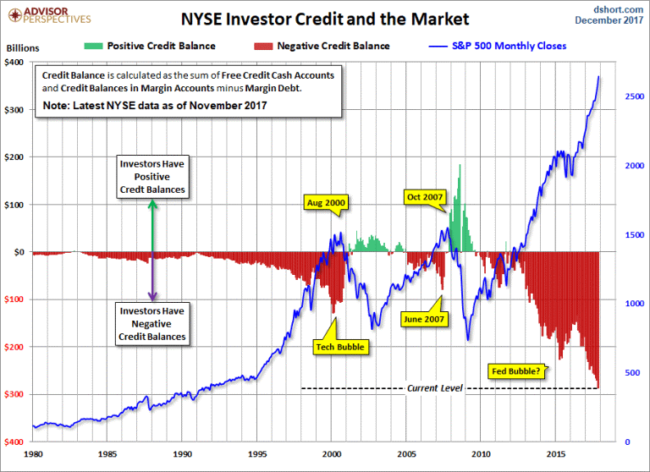 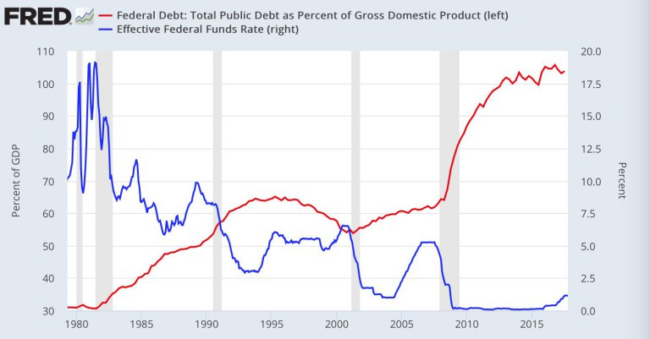 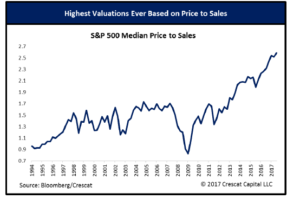 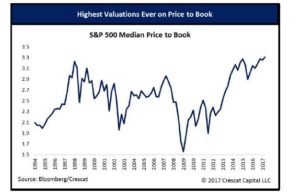 Commodities to stocks are at all-time lows and poised for a major turn: 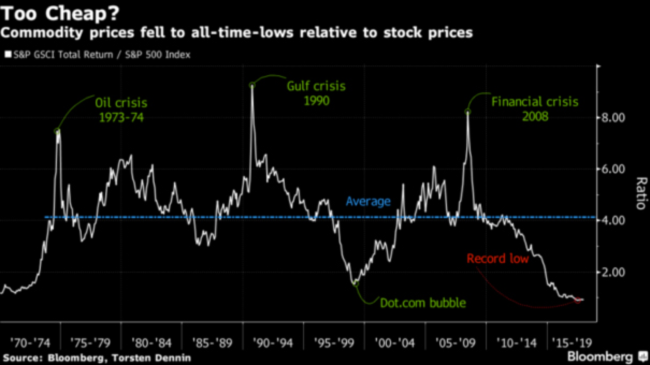 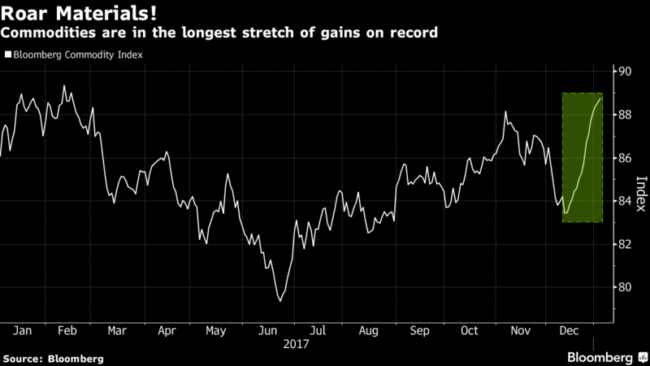 China’s takes a major percentage of many commodities like 50-70% of global coal production and almost 50% of aluminium, nickel, zinc, copper, iron ore and lead: 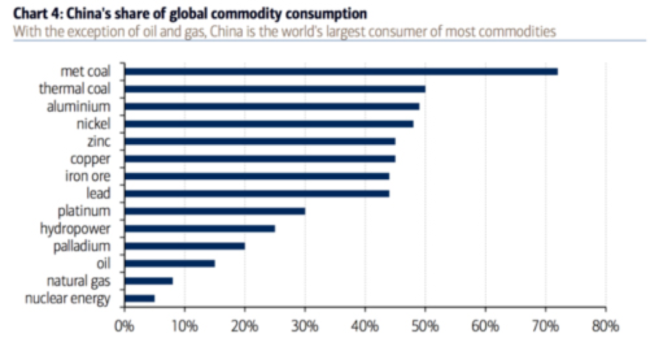 The dollar has been in a downtrend for 300 years. If we exclude the American Civil War, the fall started after the creation of the Federal Reserve and accelerated in the 1930s. After 1971, when Nixon abolished the Gold Standard, the dollar has virtually collapsed. In the last 105 years, the dollar has lost 99% against the only money which has survived in history, namely gold. 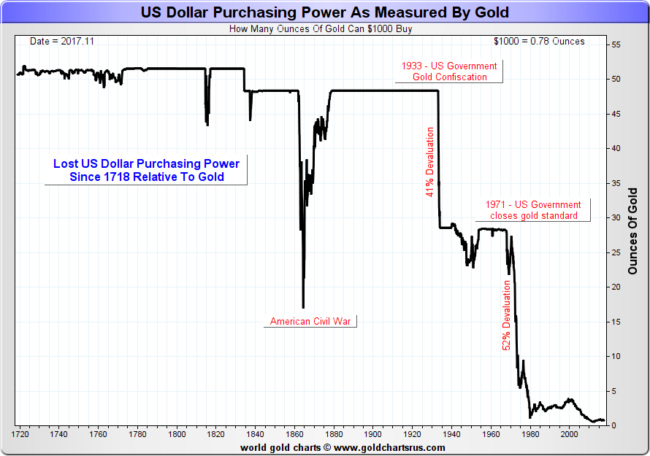 It was clear to me already early in 2017 that the dollar rally since 2008 peaked in November 2016, right after Trump was elected. So far the dollar is down just over 12% from that level. The fall is likely to accelerate in 2018. Medium term, the 70 level will be reached but the eventual target is likely to be at least the 40 level in the dollar index which is a further 56% fall from today. What we must remember is that we are measuring the dollar against a basket of rubbish currencies which are all going down in real terms together with the dollar. It is just that the dollar will fall faster than the other fiat currencies in the race to the bottom. 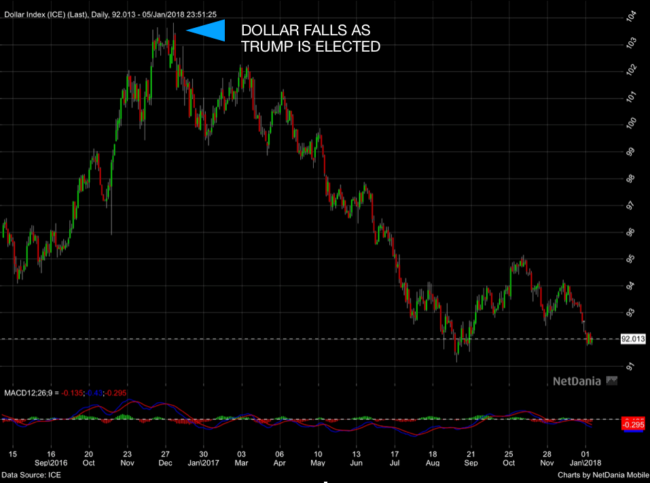 The US 10 year treasury bottoms in 2012 with a double bottom in 2016. The 2016 bottom showed bullish divergence on momentum indicators which was an indication of a change of trend.

It is now clear that the uptrend in rates is in tact. Over the next 3-5 years, rates are likely to be at least a high as in the 1970s which means the high teens.

GOLD UPTREND TO ACCELERATE IN 2018

Gold in Euro had a 14 year uptrend between 1999 and 2012 but only fell for one year and bottomed in 2013. As with gold in dollars, the uptrend for gold in Euros has been slow but we are likely to see a strong acceleration in 2018. 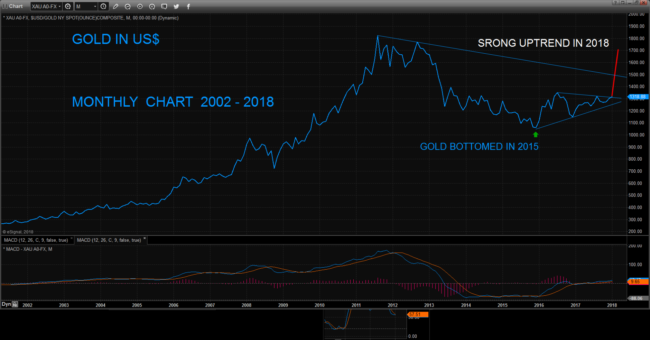 Silk Road demand for gold continues relentlessly. Between 1995 and 2017 China, India, Russia and Turkey have bought over 35,000 tonnes. The trend has accelerated since 2009 when China realised that the Western fiat based financial system is unlikely to survive. As the West has been selling, China has accumulated 16,000 tonnes of gold since 2009.

The Silk Road demand since 2009 has been substantially higher than annual global gold mine production. Together with demand from the rest of the world, the strong gold buying we have seen in the last 9 years has depleted the gold stocks in the world including Western Central bank gold which is likely to be substantially lower than the official figures.

Only paper gold manipulation has kept the gold price at the current levels. The gold traded on Comex, ETFs, between bullion banks and other fake markets has nothing to do with the yellow metal. It is just a false mirror image that will soon fade into obscurity as these markets fail.

2018 is likely to be a pivotal year for financial markets. Ever higher budget and trade deficits, ballooning debts, artificially low interest rates, money printing and fake money are all part of the Alchemy economy that the world has experienced for the last 100 years. Alchemy is a form of witchcraft. The Elite has for a century seemed to have magical skills since they have seemingly managed to defy the laws of nature. But this will now come to an end because they won’t succeed in fooling all of the people all of the time. In the end, it will be the sheer weight of debt that will choke the world economy. As I said initially, 2018 is likely to be the beginning of the end of this extraordinary period in world history.

Most investors will sadly remain convinced that current times this will last forever as stocks and cryptos move to new highs. Few will realise that we are approaching the end of the biggest bubble in history.

For the few who understand the vital importance of preserving wealth, this is the time to own physical gold and silver and some precious metal stocks. Gold and silver will in coming years reach values which are hard to imagine. But precious metals should not be held for the potential major gains but as insurance against risk which is unprecedented in world history.