Buy A House For 2.6 Ounces Of Gold
By Egon von Greyerz 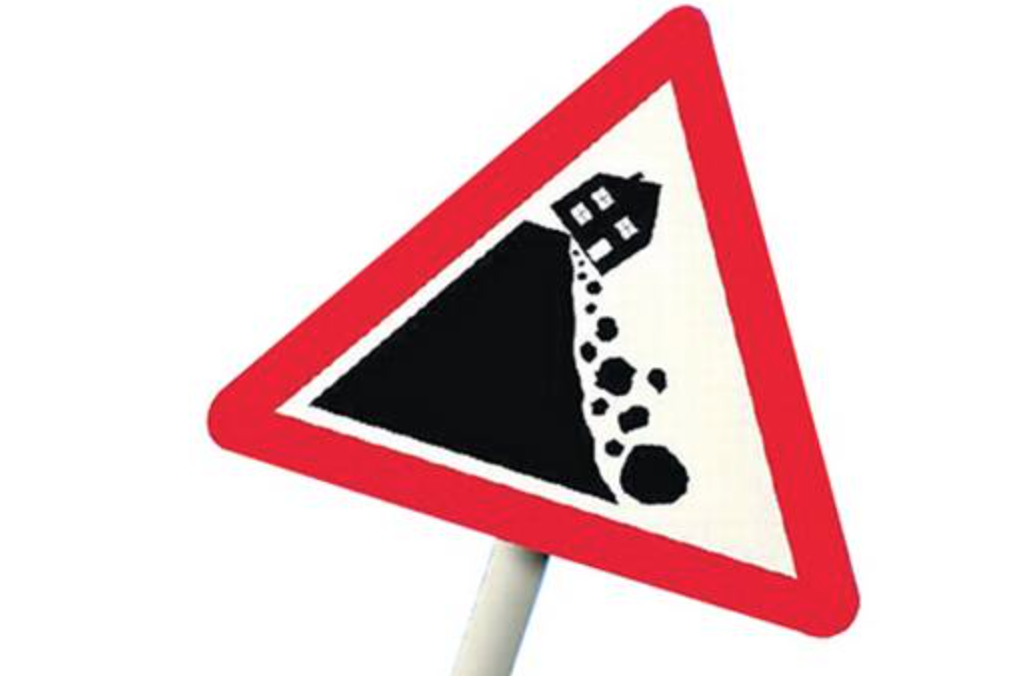 Few people realise the coming bargains in all asset markets within the next five years or so. Stocks, bonds and property will be fractions of current prices. I discussed in last week’s article how I expect stocks and property to decline maybe as much as 90%. Most people will consider this as sensational speculation and impossible but similar falls have happened in history before. And at no previous time in history has there been a credit bubble of a magnitude that the world is facing today. Previously individual countries have experienced depressions, often preceded by hyperinflation. But never before has every single industrialised country had a century of exponential growth of credit, asset prices and inflation which is likely to lead to a global collapse.

False growth based on fake money

It is of course impossible to time the end of a 100-year super cycle bubble. It has already gone on for much longer than many of us thought was possible. But governments, central banks as well as commercial banks have succeeded in pumping endless amounts of money into the system to keep the Ponzi scheme going. Most people do not understand what is happening to their money. They believe that their dollar, pound or euro is worth the same as it was 10 years ago, or 25 years ago. Since the creation of the Fed in the US in 1913, all major currencies have declined in value by 97-99%. This means that savings have been destroyed by the same amount. Savings are essential for an economy to grow soundly. Savings are the basis of investments for growth in all areas of the economy, whether it is manufacturing, housing or infrastructure. To achieve real growth, there must be savings. The growth that the world has experienced in the last few decades, especially since 1971 when the gold backing of the dollar was abolished, has been based on a massive debt expansion. Credit creation leads to currency debasement and in real terms virtually no growth is achieved. This is why real median wages for ordinary workers are not growing in many countries, like the USA or UK.

The world will soon experience how false and dangerous global growth has been since it is standing on a foundation of paper money. As this foundation collapses in coming years, the world will realise that all the assets that have been inflated to bubble levels will lose most of their value.

After Trump the flood

Trump will continue the tradition of his predecessors and expand US debt by at least 9% annually (which is the average since 1981) but probably a lot more since he has promised major infrastructure spending. On top of that, he will most probably encounter a major economic downturn combined with problems in the financial system. This is very likely going to lead to money printing of astronomical proportions and hyperinflation.

The painting below was originally featuring Obama and Bernanke who together managed to double US debt. But Trump and Yellen are likely achieve even more, leading to a deluge or flood of printed money. Après Nous le Deluge (After us the flood) is what Louis the XV’s mistress, Madame de Pompadour, said to the French king after losing a battle against the Prussians in 1757. The subsequent decline of the French economy led to the French Revolution. The coming decline of the US economy could sadly lead to a similar outcome. 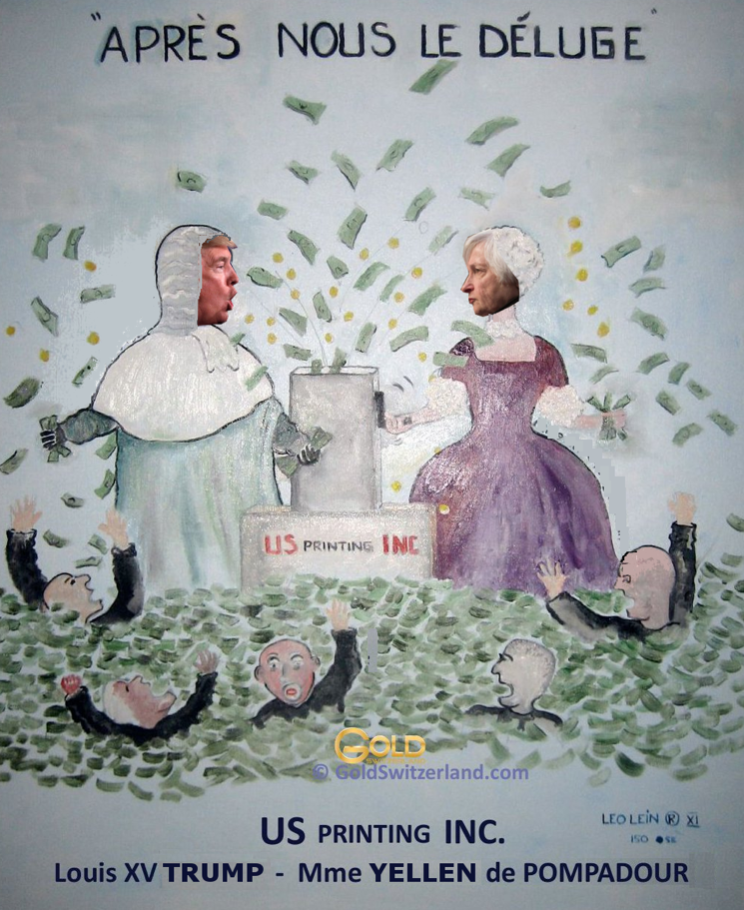 The effect of an implosion of the debt and additional massive money printing will give once in a lifetime opportunities to the very few who are now taking the right measures to preserve wealth.

Loans will be inflation indexed

Anyone buying a house in the US today or in Europe is going to pay a price which he will not see in his lifetime in real terms. Nominal prices might be higher due to hyperinflation. Nobody should believe that they will be able to repay their loans with hyperinflationary money. There are numerous risks; many will lose their jobs, interest will be 15-20% or more. But the biggest risk is indexation of loans. Banks will most certainly index loans by a percentage of inflation. There is likely to be some emergency legislation that supports this draconian measure.

So if we look at what could happen to house prices in real money which is gold, it could have consequences that few can see today.

As I outlined in more detail in my article last week, my forecast for gold in coming years is at least $10,000 in today’s money. In hyperinflationary money, it will be many times higher. At the same time, I expect that the inflated housing bubble fuelled by credit will collapse. House prices will go down by at least 75% and probably by as much as 90%.

A 75% fall in house prices is very realistic and a likely minimum fall. At that level with gold at $10,000 a house doesn’t cost 7 kg or 225 oz but 0.2 kg or 7 oz. So in gold the price is now down 97% and costing 3% of what it cost in 2016. This sounds totally unrealistic but it has been the experience in countries with hyperinflationary depression like the Weimar Republic.

Let’s also look at a fall in house prices of 90%. Even more unrealistic many would say. But let’s just remember that an average house in 1916 was under 1% of what it costs today at $2,000 against $265,000 now. So in a credit collapse combined with interest rates at 15-20%, high unemployment and substantial economic contraction, a 90% fall could easily happen.

For someone who believes that this scenario is a possibility, which of course will be very few, he would be able to buy a house for 1%, in say 2021, of what he would pay today, if he held his money in gold. It sounds unreal but the risk is such that buying a house today is likely to be a very costly and perhaps ruining experience. So what should you do if you own a house already. If you are not worried about a potential price fall of 90%, you keep the house as a place to live rather than an investment. But if you have a mortgage on the house which you couldn’t service with substantially higher rates and especially if you lost your job, it would be better to sell now and buy gold. Renting then becomes a much better option.

Short term gold is under pressure and could decline a bit further. It is even possible that they try to push it down in the paper market to the 2015 December low of $1,050.

On December 4th, there is the Italian referendum which could have a major influence on markets. Also very important is the Fed meeting 13-14 December. The whole world expects a US rate increase and this has led to a surging dollar. If the Fed disappoints the markets, there will be a massive shock. But even if the Fed does what everyone anticipates, I would expect that Dec 14th is the latest that many markets would turn – dollar down, stocks down and gold up.

Thus, gold investors should just ignore the manipulations in the paper gold price. Strong physical demand continues in China and Russia. If import restrictions continue in India, it will be circumvented by smuggling. Any restrictions will just lead to a much higher gold price which India is currently experiencing with gold at $1,700 per ounce. Although the short-term trend is down, the many financial and economic risk factors and black swans circling around us can change that trend in an instant. The potential shock that the global economy will experience in coming months and years will make the current price under $1,200 seem a bargain of a lifetime.

Whatever the short-term moves, gold will reach at least $10,000 in today’s money. Gold is now the cheapest insurance anyone can buy against a rotten financial system.