Gold prices in other currencies

How is the gold price determined?

There is no such thing as a single physical gold price. It is a commodity, and as such, subject to the forces of supply and demand (as well OTC manipulations, see below) and differs geographically.

Most investors focus on what is called the “spot price of gold” which is the price per troy ounce of gold as determined by the trade of large (400-ounce) wholesale bars in London. The smaller the gold size from this 400-ounce standard, the higher the premiums most investors pay above spot.

London gold trading is done within the London Bullion Market, which is limited to 12 London Bullion Market Association (LBMA) member institutions, whose daily trades are fed through Bloomberg, Reuters and Netdania links from an amalgam of LBMA trades which effectively (and including daily auctions) constitute the daily spot price, which is fixed twice per day (10:30 AM and 3:00 PM).

As the world reserve currency, the USD, decoupled from a gold standard since 1971, currently sets the gold price based upon inflation expectations and interest rates.

Since 2006, the gold price is inversely correlated to the real rates of the 10-Year US Treasury Inflation Protected Security, or “TIPS”: 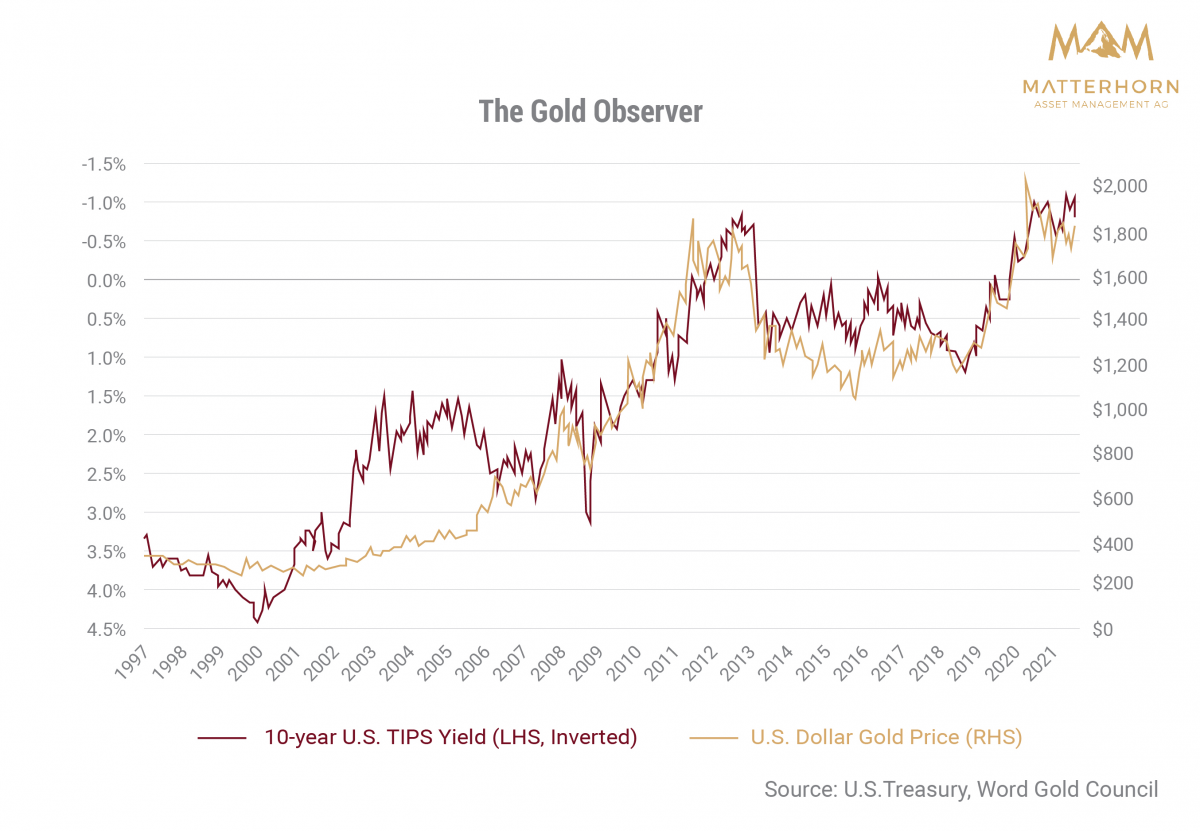 All other currencies outside of the USD price gold on exchange rates between a specific currency and the USD.

The market for physical gold is broken down into two broad categories: Gold Exchange Trading and Bilateral Trading Networks.

In addition to these markets, there are derivative markets for paper gold, which greatly, and unfairly, impact the physical price of gold.

There are sparse few centralized markets or “exchanges” within which gold is traded, i.e., the Shanghai Gold Exchange, Borsa Istanbul Exchange and the Dubai Gold and Commodities Exchange, each of which transparently reveal buy and sell orders in real-time.

Below are the various gold exchanges by location, name, and bar weight as well as purity. 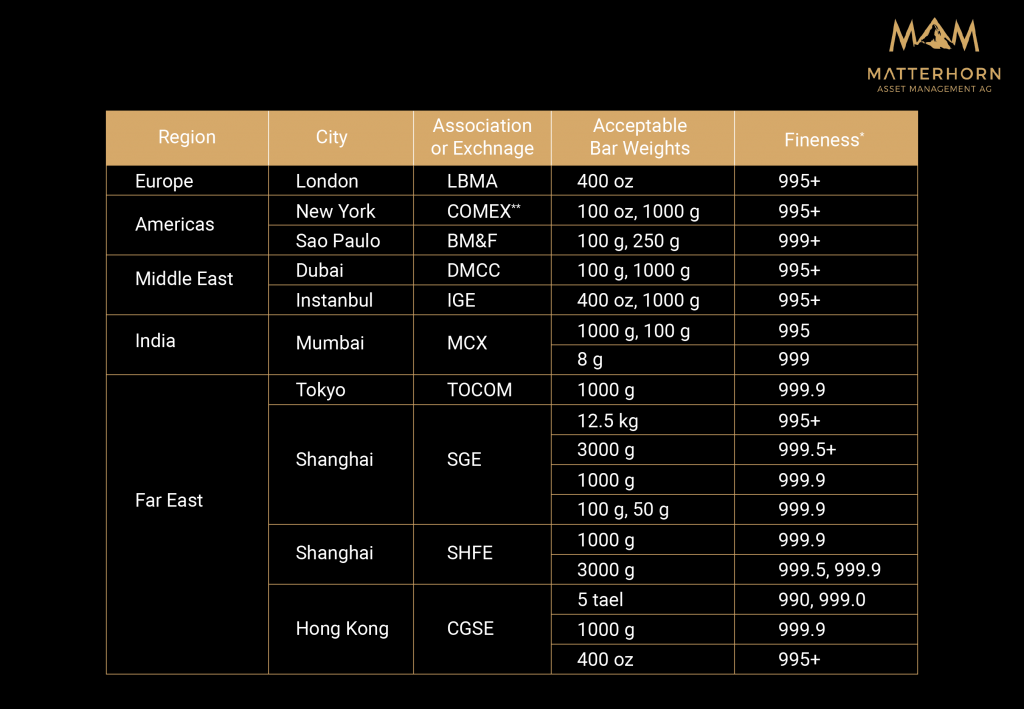 By contrast, the Bilateral Trading Networks, also known as the Over-the-Counter, or OTC trades, are far less transparent than exchange traded gold. They are primarily arms-length (by phone, computer or face-to-face) and are more “discreet,” which is a euphemism for unregulated, levered and often illiquid, i.e., dangerous.

Given the relatively small number of global gold exchanges, the majority of gold trading occurs in these OTC/Bilateral Networks.

Each day, millions of parties (from investors, jewelers, mints, miners, investment funds) trade in these OTC markets. Although a man buying a gold ring from a jeweler for his wife constitutes a “Bilateral Trade Network,” the driving force behind this network is the OTC market lead by the London Bullion Market, which is overseen by the London Bullion Market Association, or “LBMA.”

Switzerland, where the vast majority (over 70%) of gold bars are refined, is another major OTC market setting for gold.

As for the Derivative Market, it deals in the buying and selling, as well as leveraging, of various paper contracts which in effect represents paper interests rather than actual physical ownership or delivery in physical gold. Needless to say, such a paper market, as opposed to physical market, is riddled with counterparty risk.

Despite the far greater risks in the derivative market, it has an immense impact on the price of physical gold. For decades, a small cadre of deep-pocketed banks and institutions have deliberately used highly levered short contracts to completely distort the free-market price of gold as measured by actual and natural long contracts for this metal. In effect, such levered and deliberate short contracts (despite Basel III efforts/optics to limit the same) have placed an unnatural boot to the neck of natural supply and demand forces for gold which amounts to legalized price fixing, as we discussed here.

In addition to these exchanges, gold is also part of the ETF system and futures market. The former is riddled with counterparty and operational risk; the later even more so, with the added danger, as well as distortion, of excessive leverage.

What is paper gold?

By its very title, paper gold is best defined by what it is not; that is, paper gold is not physical gold, and by extension, is ultimately not gold at all.

Paper gold comes in many forms, such as a contract for eventual gold delivery in the futures market, or a call or put option on the price of gold in the speculative derivatives market. Furthermore, paper gold can include a receipt or share by a gold ETF evidencing your ownership right to a specific amount of gold. Paper gold can also include a letter from a major commercial bank evidencing your ownership, and the bank’s storage of, a specific amount of physical gold.

Unfortunately, none of these forms of paper gold gives you any true ownership of gold, and are in fact riddled with extreme risk.

Gold owned in a future’s contract in the OTC market, for example, can include 100 to 200 contracts for the same ounce of gold, which means more contracts are “demanded” than the actual “supply” of the gold contracted for. When you add massive multiples of leverage to the paper gold traded in the derivatives market, it becomes mathematically clear that such paper gold is a mere trading (profit) scheme rather than actual asset. Finally, gold held by ETF’s or major banks is a mere façade of actual gold ownership once one fully understands the myriad levels of counterparty, operational and intermediary risks inherent to such gold “ownership.”

What is gold-fixing, and is the gold price manipulated?

For decades, it has been the open secret in Wall Street and around the financial world that the price of gold has been subject to a near permanent short imposed by the major bullion and central banks of the world, including the Bank of International Settlements, which is effectively the central banks’ central bank.

When nearly every one of the thousands of daily trades on the COMEX market is a gold “buy,” for example, one would naturally assume that such demand would consistently and naturally keep gold price high and rising.

However, when just 5-8 individual yet highly levered and powerful bullion banks can run daily short contracts in the derivatives market at a greater volume than the natural buyers of gold, this un-natural yet deliberately price-fixing system can keep gold prices forced lower than natural supply and demand would otherwise dictate.

The effort by bullion and central banks to keep a price pressure on gold stems from the simple fact that if gold were left to be fairly priced in the open market, its extreme valuation would make an immediate and absolute mockery of what extreme monetary policies (i.e., money printing) has done to fiat currencies like the USD, euro, yuan, yen etc.

Thus, gold is deliberately and legally “fixed” in order to prevent a larger awareness of the failure of Modern Monetary Theory and the slow and steady debasement of global currencies. Eventually, of course, this levered, distorted and highly risk “price fix” will implode under its own weight.

For more on gold price fixing, please read here and here, or watch this most recent video discussion, here.

How big is the paper gold market compared to the physical gold market?

There are currently around 109 ounces of “paper gold” contracts traded for every ounce of physical production. The stark deficit between these numbers demonstrates the fragility of global gold exchanges and highlights the necessity of owning physical gold.

How is gold a store of value?

Although gold is no longer used daily as medium of exchange for common purchases, it has served for thousands of years as the most consistent form of real as well as alternative money in global history. In this role, gold remains the most loyal hedge against debased currencies and the growing forces of inflationary wealth destruction.

Like any real asset, gold is not a perfect constant, as no such constant exists in the study or history of economics. That said, no other asset has ever been more constant, since the first Persian trading huts or the empires of Rome to the modern era of central bank-driven (distorted) capitalism.

When measured against a single milligram of gold, the major currencies of the modern world have lost greater than 95% of their value since Nixon decoupled the USD from the gold standard in 1971. 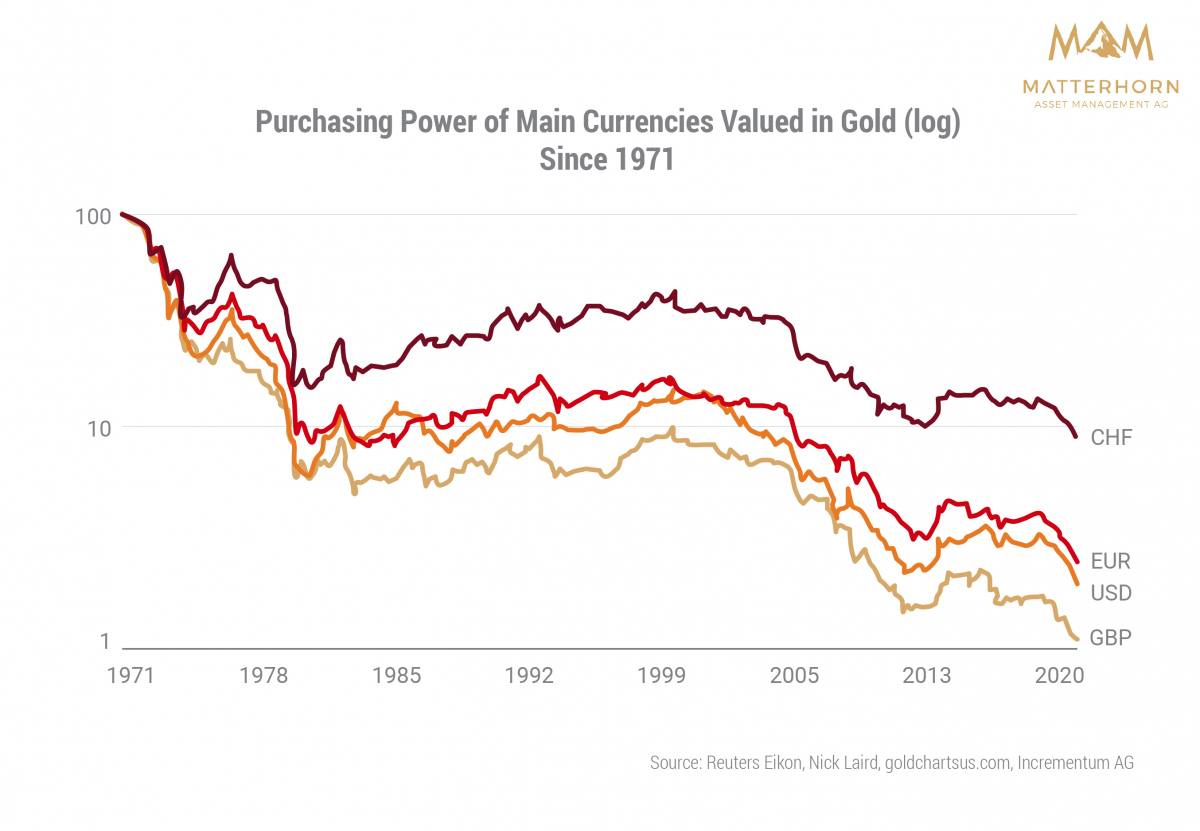 Thus, for those looking to both preserve and transfer wealth through the generations, they require scarce and immutable assets which can’t be created (i.e., printed or mouse-clicked) and hence debased by sovereign policy makers.

For years, many investors have been understandably lulled into the financialization of wealth provided by rising risk assets like stocks, bonds, real estate and even cryptos, as the opportunity cost of owning a stable of value like gold has been eclipsed by the extreme and seemingly immortal rise in these bubble assets since 2008 in particular.

Unfortunately, all bubble assets, as well as all fabricated fiat currencies, inevitably and eventually implode. Measuring portfolio, personal or even generational wealth in such assets and currencies is therefor as seductive as it is extremely dangerous.

This is why generations of sophisticated institutional, sovereign and family wealth has always hedged such wealth with a significant allocation of physical gold, what we recognize ultimately as insurance for currencies already burning to the ground. See, here.

Are gold and BTC similar stores of value?

The simple answer is no, though many crypto instant millionaires would strongly, and understandably, disagree.

Despite our shared distrust for fiat currencies and the now openly inflationary and failed experimentalism of extreme central bank money creation (and hence currency debasement), we do not see crypto currencies as either “digital gold,” an alternative currency or an actual store of value against such distorted global currencies.

Instead, we see crypto, and its exceptional blockchain technology, as the greatest (and hence potentially most dangerous) speculation asset of modern times.

Speculation, of course, is fine, and we congratulate any and all who have successfully speculated in the crypto space.

But as a stable and historically-confirmed store of value and hence wealth preservation asset, crypto’s, by their very profile and volatility (as opposed to “consolidation phase”) do not qualify as such.

Thus, speculate as you wish with digital coins, but make sure the wealth generated therefrom is protected by a real store of value, as many of our gold clients have themselves done.

Nor do we see cryptos emerging as a new and widespread medium of exchange, for the simple reason that central banks and sovereign nations will and would never allow such digital currencies to replace their own admittedly debased currencies.

The political, legislative and banking forces against which names like BTC are fighting are simply too strong, albeit distorted, discredited and likely to implode one day. When that day comes, however, gold will be the far more trusted and consistent asset to protect against such a disorderly currency “re-set” to come, which will be characterized more by central bank digital currencies (CBDC) than individual coins like BTC.

In the interim, of course, cryptos can continue to enjoy, as well as suffer, extreme price moves which can and should only be speculated by those who can manage and afford the risks of such speculation.

For more detail on the much-debated differences between gold and cryptos, please see here.

Why can’t I buy gold at spot price?

The simple answer is that only those banks and institutions within a highly selective association of member banks can by gold at the spot price. The dealers who represent those members must charge a mark-up on the spread from the buy price and sell price in this market, which spreads can increase as gold supply tightens against rising gold demand. 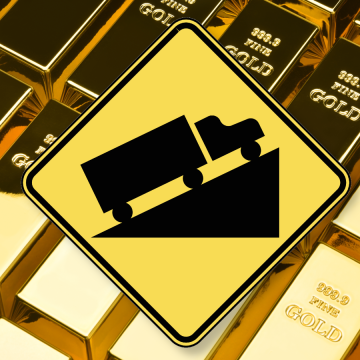 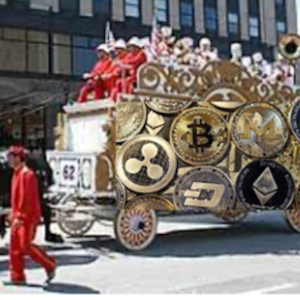 Is the $32 billion collapse of the crypto exchange FTX the catalyst for the fall of the financial system? We… 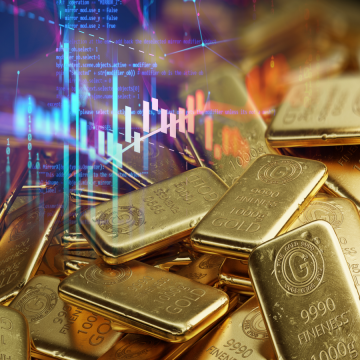 Ronni Stoeferle: 5 Reasons why the Classic 60/40 Portfolio Is History and Gold Is Becoming more important in the Portfolio

2022 has been a highly unpleasant year for bonds so far. Over the course of the year, 30-year US Treasuries,…