Concerted QE – The Beginning of HYPERINFLATION

by Egon von Greyerz – September 2012
We are living in unprecedented times. The perceived prosperity that the world has enjoyed in the last 100 years and in particular the last 40 years is coming to an end. The debt based wealth that has been created is now at great risk of imploding both for nations and for individuals. Never before in history have most major nations been on the brink of bankruptcy. In addition, the world financial system is bankrupt and only still standing due to false valuations of banks’ toxic assets. The risk of sovereign or bank failures is major. It is there­fore critical for investors to eliminate counterparty risk. Throughout history gold is the only currency that has survived and maintained its purchasing power. All other currencies have been printed to oblivion. Gold represents the best insurance against a fragile world financial system. But due to the fragility of the banks and the massive counterparty risk, investors must hold physical gold and store it securely outside the banking system. The mess in the world both politically, economically and financially is deteriorating at a rapid pace.

Can it get worse? Of course it can. We have only seen the beginning of the collapse of the credit enhanced bubble economy. Every single country in the world is having problems. In addition to the European and US economies, the economies of India, China, Japan, Korea to mention just a few are all turning down fast.

In addition the problems in the MENA countries (Middle East, North Africa) are getting a lot more severe. I have said in the last few years that the situation in this area is likely to deteriorate dramatically with riots, social unrest, civil war as well as interference by other nations. And it will spread further than the current areas of unrest in Libya, Egypt, Iran, Sudan, Lebanon, Yemen, Morocco, and Tunisia etc. The mixture of famine, poverty, political unrest and oil is very dangerous and will sadly lead to continued conflict. Removing leaders or dictators is not a solution and is more likely to lead to anarchy.

Europe is turning into a real circus.
The British MEP Nigel Farage is absolutely brilliant in his attack on the delusional Eurocrats. In this speech from 12 Sep. 2012 (click here if not visible on your mobile device) in which he attacks Barroso’s and the EU leaders’ creeping dictatorship, who are oblivious, of the EU collapsing all around them. In every country the situation is deteriorating. Irish banks need more money mainly due to a catastrophic property market. The Greek mess continues on the country’s way to bankruptcy. And Spanish loan delinquencies have now soared to a 50 year high. This debt will of course never be repaid. Spanish house prices continue to collapse and were down 14% in Q2 2012.

In all this mess the Eurocrats are trying to introduce more regulation and more control of a system which needs just the opposite.  A bank union with full oversight of the banks is now proposed to be implemented by 2014. In addition Barroso is proposing a Federation of European States with a New Treaty. The costly EU and Euro zone experiment has totally failed and now its unelected and unaccountable leaders are attempting to increase their power in order to precipitate the total collapse of this monstrosity.

And the circus continues. Germany cannot stop the ESM according to the German Court. But they can veto it. In any case the court only allowed Germany to contribute €190 billion which is a drop in the ocean for the drowning Euro zone which will need trillions. But the German Finance Minister Schäuble stated that the ECB doesn’t have mandate to print money. No wonder Nigel Farage is having fun in the European parliament with every politician in the EU having his own interpretation what everyone can or cannot do whilst everything is collapsing around them.

The US has enjoyed a relative calm in the last few years since all the attention has been on Europe. But the debt and deficit in the US dwarfs what is happening in Europe. And the difference in the US is that there is no attempt whatsoever to cut the deficit of around $1.5 trillion p.a. or the unfunded liabilities which are growing by $10 trillion p.a. The world is now starting to worry about the massive danger to the rest of the world of the greatly indebted US economy. The dollar is now coming under pressure and opposite to many “experts”, it is not the Euro that will collapse next but the dollar. All currencies will continue their fall to their intrinsic value – Zero. It is just that against each other they can‘t all fall at the same time. But against gold they are already down 97-99% since the creation of the Fed in 1913 so there isn’t far to go to Zero.

The Fed is now starting its permanent and unlimited QE3 guaranteeing a hyperinflationary depression. QE1, QE2 and operation Twist have not helped. Nor have Zero interest rates. So the fed is lending and creating unlimited amounts of money and providing it at no cost and still the economy cannot recover. But a system with free and unlimited amounts of paper money can never work and this is why the US and the whole world are in an irreparable situation. 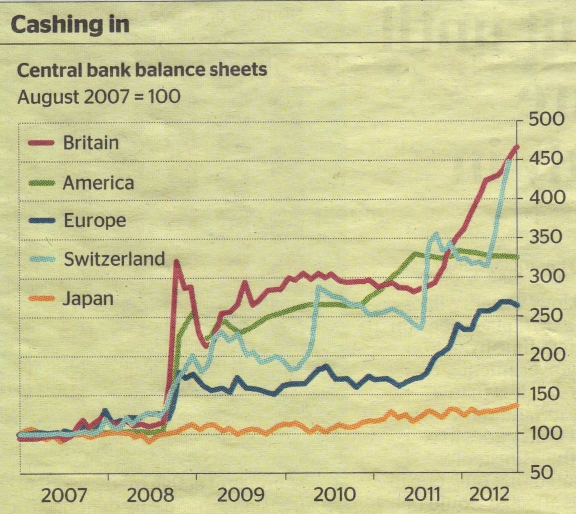 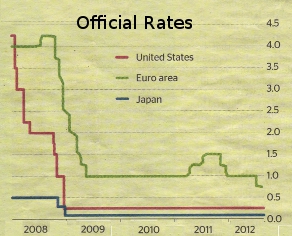 I have been forecasting joint action by the central banks for some time and although it didn’t take place at the same time, it was clearly coordinated. And this had to happen because without it the financial system will collapse and sovereign states would run of money. But the money printing is no remedy to a bankrupt system. The chart above from The Times in London shows how the Central Bank balance sheets have exploded since 2007 with the UK and Switzerland up 4.5 times, the US up over 3 times and Europe 2.5 times. But this is of course the mere beginning of the Banks’ spending bonanza.

So we are now starting the acceleration phase of rising deficits, falling currencies and rising inflation leading to a hyperinflationary depression. This is a vicious circle that will not stop until we have seen the “final and total catastrophe of the currency system involved” (von Mises). The big difference this time is that it will involve most major nations. This is unprecedented in world history and the consequences will be difficult to predict accurately. What is certain is that it will be a very different world than the false, debt enhanced and decadent system that we have experienced in the last few decades.