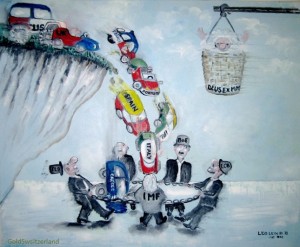 “THERE IS NO MEANS OF AVOIDING THE FINAL COLLAPSE OF A BOOM BROUGHT ABOUT BY CREDIT EXPANSION. THE ALTERNATIVE IS ONLY WHETHER THE CRISIS SHOULD COME SOONER AS A RESULT OF A VOLUNTARY ABANDONMENT OF FURTHER CREDIT EXPANSION, OR LATER AS A FINAL OR TOTAL CATASTROPHE OF THE CURRENCY SYSTEM INVOLVED” – Ludwig von Mises

The Cyprus event may later, in the history books, be seen as the catalyst of the fall of a century long Ponzi scheme. This could rank in line with the shot in Sarajevo as the start of WW1 or the collapse of Kreditanstalt in 1931 as the start of the Great Depression.

Isn’t it ironic that exactly 100 years after the creation of the Fed (a private bank created for the benefit of bankers) that the fragile and bankrupt financial system is likely to fall due to the insolvency of a couple of Cypriot banks.

But what is happening in Cyprus will not be the reason for a collapse but just the trigger for what has always been inevitable.

There are only two possible outcomes of the crisis we are now in:
– Either there will now be a run on the massively leveraged (25-50 times) banking system which would lead to no debt being repaid and a deflationary collapse. 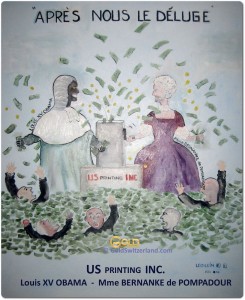 – Alternatively, we will now see the beginning of the most massive money printing that the world has ever experienced, leading to a hyperinflationary depression.

The second outcome is the most likely although the risk of an systemic implosion is very high if central banks are too slow in flooding the system with money. The deflationary outcome would lead to no banks surviving and no money in the system. And the hyperinflationary outcome would lead to money being totally worthless. In both cases gold will be a major beneficiary.

But printing money will of course not solve anything since worthless pieces of paper with ZERO intrinsic value can never create wealth. At best it will just kick the can down the road for a very short time.

Cyprus is a mini model of the world financial system. The IMF, ECB and the politicians thought they could get away with the depositors taking part of the loss. But they have clearly not considered the consequences. This action (if ratified) will not only lead to a run on the Cypriot banks but also on banks in other weak areas such as Ireland, Spain, Portugal, Italy, Greece etc. Eventually it could spread worldwide. 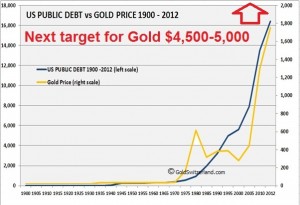 The IMF, Fed, ECB, BoE, BoJ and other central banks are likely to very soon come out with a concerted action to support the financial system in order to avoid a total collapse.

For well over ten years I have advised investors to get their assets out of the banking system. This doesn’t mean just their money but also all other investments (stocks, bonds, gold etc) which are likely to be lost when banks go bankrupt.

Wealth preservation is now absolutely critical. This involves eliminating counterparty risk whenever possible. EverythIng within the banking system has counterparty risk even if it is segregated or allocated. Lehman, MF Global and Sentinel are all examples of client assets being lost in the financial system.

Gold (and silver) will continue to reflect the total destruction of paper money that the unlimited money printing will lead to. But investors must hold physical precious metals and they must be stored outside the banking system.