Unfortunately Greece only has one option which is organised default and exit from EMS with a virtual devaluation of around 60%. Any other option will not solve Greece’s problems and just lead to costly delays of the inevitable outcome at an ever higher financial and human expense for Greece and its sponsors. 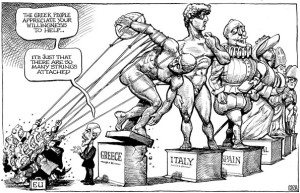 Former Dutch Finance Minister Wouter Bos, responsible for the much criticised nationalisation of ABNAMRO Bank in 2008, has a weekly column in ‘De Volkskrant’, one of the Dutch tabloids.

In his latest blog he writes the following:

“I remember my time with Shell when a colleague taught me that it pays for all parties to come out of a negotiation with a positive feeling and that it is much easier to negotiate with a good negotiator on the other side of the table; I thought about this when I saw pessimism grow these last few days about the Greek negotiations and its future in the Eurozone area. We knew the Greeks were in disagreement with many of their ‘saviours’. That they now also seem incapable of playing the game as it’s typically played at this level which gives rise to more concern. This can partly be explained because of fresh, less experienced Greek politicians at the helm but also with a whole new group of civil servants on their side. I understand the concern because when I first got involved as Finance Minister with the Greek problems back in 2009, my Greek counterpart Papakonstantinou, like all of us, was assisted by his top civil servant. The discussion at the time was about acknowledging the fact that the then current problems had been embedded due to the manipulation of their official statistics (Budget deficit and National Debt) prior to entering the European Monetary Union in 2002.
Greece, on paper, therefore appeared a lot healthier than they really were. My Greek colleague tried to defend their case by explaining that a completely new team was now (2009) in charge, seeking a much fresher and transparent handling of their responsibilities. His top civil servant brought this same defence  to the table with much enthusiasm from his colleagues from other countries. It impressed, although so it seemed. Until my Secretary-General, Ronald Gerritse, whispered in my ear that this particular Greek civil servant, who promised everyone that things would be better from now on, was in fact the same person who 10 years earlier in 1999 presented these manipulated stats without a blink.
Continuity in the Greek civil ranks was clearly still very strong during a period where (note: 7) center-left or center-right governments were taking turns.”

Interesting bit of history from an insider which is indicative of an unsustainable Drachma fix to the Euro of 340.75. The important difference with today is that in 2014 the Eurozone countries have agreed that they will will foot any bill presented by the ECB at its sole discretion. That bill has been growing for years and now includes the continued support by the ECB to fund Greece’s upcoming rollovers. And to make things a little harder, Greece probably has had to collateralise all of its gold in the process. That Greek gold is gone! The virtual peg at 177 Drachma per Deutsche Mark or at 340 Drachma to the Euro must give way and where the a new Drachma finally finds equilibrium is anyone’s guess. The chart below may give some indication. 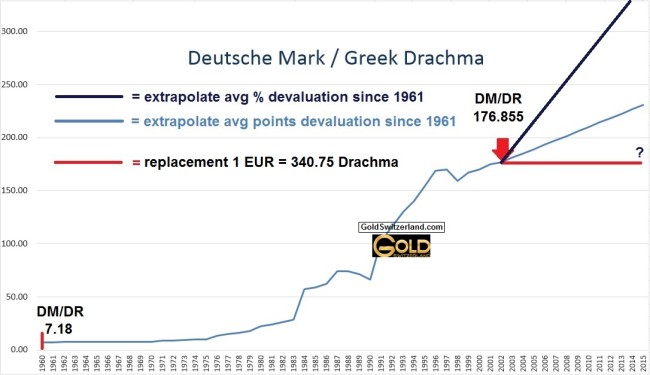 An extrapolation of 40 odd years of devaluations at an average rate of over 4% per annum means settling somewhere between 45 and 60% loss of currency value upon Grexit. And without any gold, very likely nearer the top end of that range. The positive side is that a floating currency, which should have already happened in 2009, also creates opportunity. The Greek population deserves that opportunity rather than continued uncertainty from an ever increasing and never ending debt spiral.
Tags: Drachma Today