GLOBAL DEBT IS A PEST THAT MUST BE ERADICATED - Matterhorn - GoldSwitzerland1

GLOBAL DEBT IS A PEST THAT MUST BE ERADICATED

The coming gold and silver surge is guaranteed. It is not a question of IF but only WHEN. Initially, the imminent revaluation of the precious metals will have nothing to do with an investment mania but with the total mismanagement of the world economy. A spectacular rise in the metals is just a reflection of the mess the world is in. But as the paper market fails in gold and silver, there will be panic and manic markets.

So has the Silver Rocket just started? Last week I talked about the coming silver explosion and we could be seeing the beginning of it right now. I have often talked about the Gold-Silver Ratio as the key to the turn up in the precious metals.

With bearish divergence on momentum indicators at the critical 80-84 level, it was always a matter of time before the Gold-Silver ratio would break down. When the ratio turns down from an important level, it signifies a turn up in the metals with silver leading the way. As the long term chart below shows, the target for the ratio is 15-30. A return to the historical level of 15 would mean that silver will move up 6x as fast as gold. 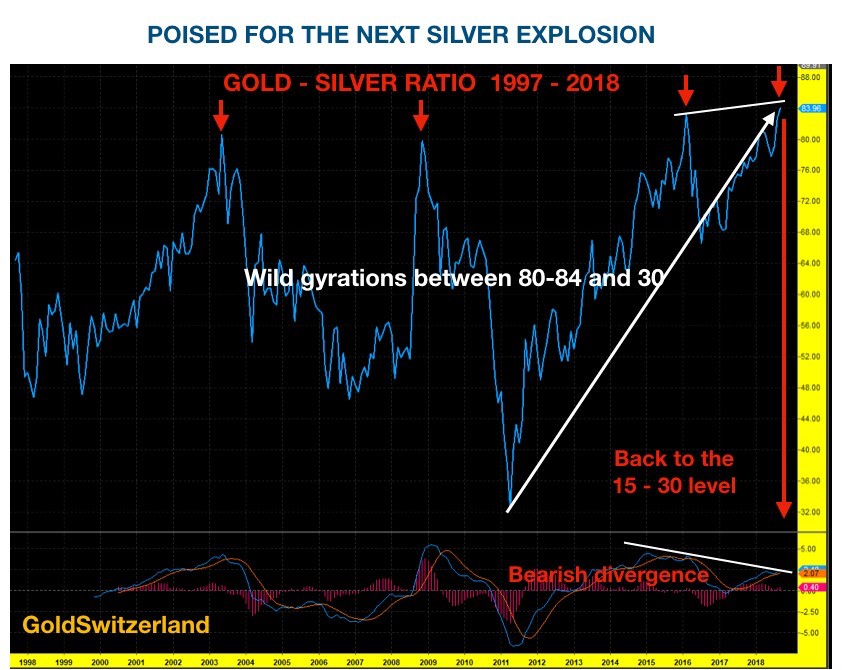 If we look at the Weekly chart of the Gold – Silver ratio below, it shows the 4% fall that has taken place in the last 10 trading days. In itself this fall might not seem significant. But the key is the reversal from a very important top area combined with bearish technical indicators. As the chart shows, this ratio can fall very fast once it starts, like the 65% fall in 2010-11 or the 23% fall in 2016. 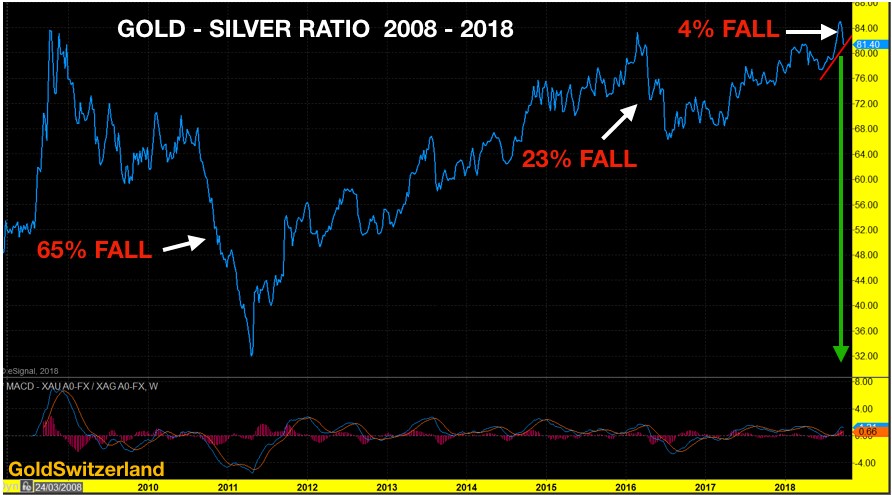 ONLY ONE SOLUTION TO THE GLOBAL MESS

Normally I avoid talking about short term moves since they make no difference to the long term strategic picture, especially from a wealth preservation point of view. The fact is that the world is in a mess economically, financially, politically and morally. We are seeing examples of this daily in most countries around the globe.

One thing is certain, no political leader whether it is Trump, Merkel or May or the EU King Junker has a chance to solve these problems. There is only one solution to the shambles the world is in.

The excesses and moral decadence of the magnitude the world is experiencing today can never vanish in an orderly way. Sadly, only a total economic collapse can solve the problem. And this is of course inevitable. No government, no corporation and no individual can or will ever repay the $250 trillion debt that is owed. Nor will values or decency return by themselves. For example, the world is more interested in whether or not a Supreme Court judge candidate had a teenage fling 36 years ago rather than having a properly functioning legal system.

So global debt must implode together with all the assets that the debt are artificially underpinning. This debt is a pest that must be eradicated from the face of the earth. The world needs bad times to come back to real values and morality. Only from that level can we get back to genuine growth at all levels.

The suffering to get there is of course going to be horrible for the world. But this is the price that we must all pay for the untenable situation we are in.

All of this can happen very quickly or it can be a slow and torturous process. In the meantime we must prepare to the best of our ability and enjoy life which after all is why we are all here.

Having had a long business life, it is natural to draw parallels with previous periods which were testing. In one sense, I was fortunate to experience a mass of economic and political problems early in my working life. That quickly gave me an excellent understanding of risk and unforeseen events.

I came to the UK in the early 1970s from Switzerland. I joined a small photographic retailer. In the early 1970s there was a global oil crisis. In the UK there was a coalminers’ strike, and our retail stores only had electricity 3 days a week. The other days of the week we sold televisions with candlelights. The UK stock market declined by over 60% between 1973 and 1974. In the US the Dow was down by 47%. I received my first options in the company at £1.32. 18 months later they were 9 pence. The interest on my mortgage went up to 21%. But the UK survived and so did our company that we later built up to the UK’s largest consumer electronic retailer and a FTSE 100 corporation. They were certainly testing times, filled with what seemed insurmountable obstacles. What is coming next will be many times worse.

NIXON THREW THE DOLLAR TO THE WOLVES

During this period, in August 1971, Nixon threw the dollar to the wolves by abandoning the gold backing of the greenback. That led to the dollar losing 96% against gold between 1970 and 1980. The dollar also lost massively against many currencies. Against the Swiss franc for example the dollar lost 65% between 1971 and 1979. 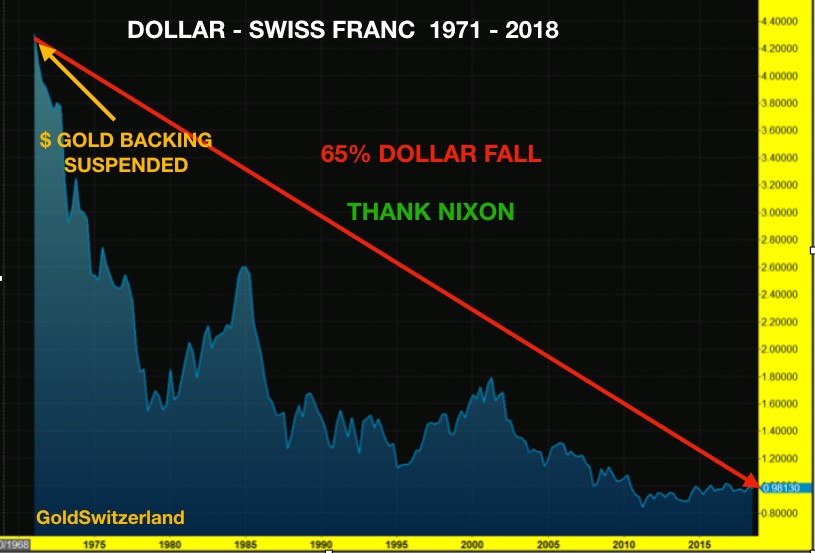 Looking at the Dollar Swiss franc chart above, the price target is around 45 Swiss cents to $1 – a 46% devaluation from here. What is certain is that the dollar is in a clear downtrend and has a long way to go on the downside. But no one must believe that the Swiss franc will be strong. This is a relative game and the Swissy will just fare a bit better than the dollar in all the currencies’ race to the bottom.

US RATES HAVE BROKEN 30 YEAR DOWNTREND 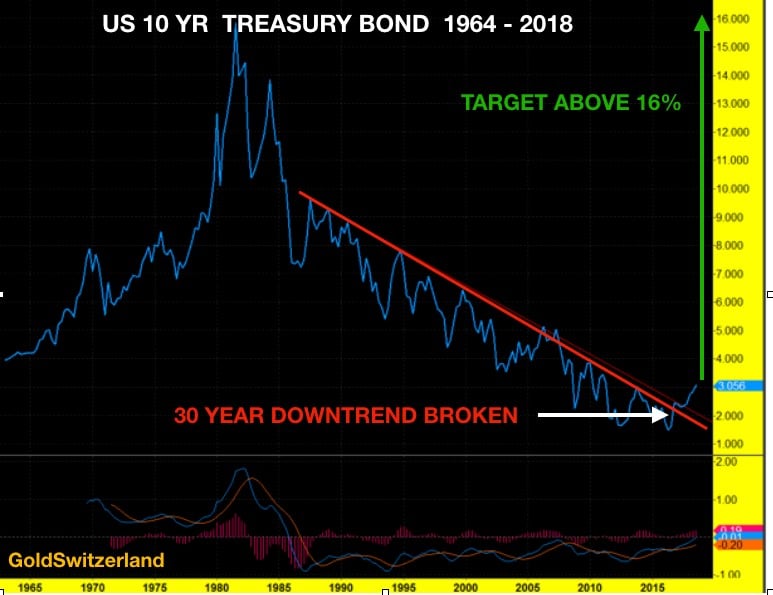 More significantly, 10 year Treasury rates have not just bottomed but also broken out of a 30 year downtrend. It would be surprising to see this rate staying below the 1981 16% peak. With hyperinflation, rates could reach infinity as US debt becomes worthless.

THE FOUR DOMINANT TRENDS IN THE COMING 3-7 YEARS

So what is likely is that the trends in the next few years will be similar to the 1970s: 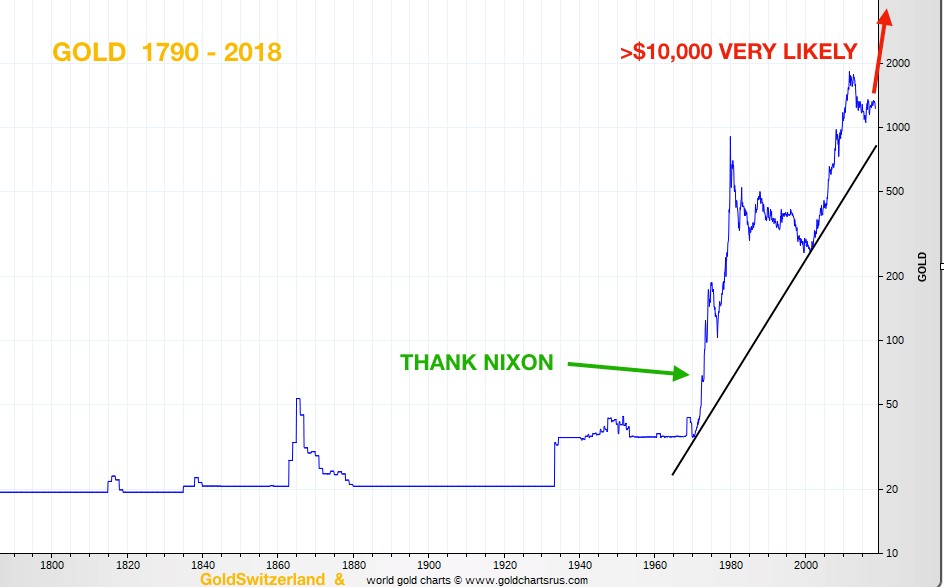 Although it is impossible to predict what the catalyst will be for the coming economic cataclysm, there are innumerable candidates. For example, the whole of the EU is a total disaster from Brussels policies, Brexit, migration, deficits, banking problems and much more. Italy’s populist government has just pushed through a spending splurge. That means still higher deficits and debts. But what does it matter since Italy is already bankrupt with debts of EUR 2.4 trillion, 140% of GDP. Add to that non performing bank loans of 20% which if recognised would shut down the banking system. In addition Italian banks have borrowed EUR 500 billion from the ECB via Target2. This is another disaster waiting to happen that no one dares to even discuss.

US IS THE BIGGEST ACCIDENT WAITING TO HAPPEN

But the US is of course the biggest potential disaster with debts and deficits running out of control. The budget deficit for 11 months of 2018 is $900 billion. It will clearly break $1 trillion. The August deficit alone was $214 billion. In the last 12 months US debt is up by $1.6 trillion. As I forecast for the last couple of years, US debt will increase by at least $2 trillion per year in coming years. As rates rise, tax revenue won’t even cover the interest costs.

Italy and the US are just two examples of potential triggers that will tip the world economy into the abyss. More about this in coming articles.

As we most probably are at the end of a secular super-cycle in the world economy, the topping action could last a bit longer, especially in stocks. But risk in markets are now at an extreme and investors must consider if they should ride a potential final small wave or batten down the hatches and take all the protective measures at their disposal.

With risk at an historical extreme, wealth protection is critical. In virtually every crisis in history physical gold and silver have served as the best insurance available.

There is no reason why it would be different this time.