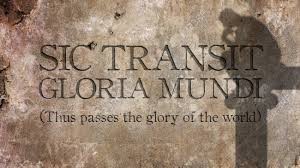 “Sic Transit Gloria Mundi” (Thus passes the glory of the world). This phrase was used at the papal coronations between the early 1400s and 1963. It was meant to indicate the transitory or ephemeral nature of life and cycles.

As we are now facing the end of a major economic, political and cultural cycle, the world is likely to experience a dramatic change which very few are prepared for. Interestingly, the peak of economic cycles often coincide with the peaks in climate cycles. At the height of the Roman Empire, which was when Christ was born, the climate in Rome was tropical. Then the earth got cooler until the Viking era which coincided with the dark ages.

THE PROBLEM IS “THE ECONOMY STUPID” AND NOT THE CLIMATE

Yes, of course global warming has taken place recently as the effect of climate cycles. But the cycle has just peaked again which means that all the global warming activists will gradually cool down with the falling temperatures in the next few decades. The sun and the planets determine climate cycles and temperatures, like they have for many millions of years, and not human beings.

The climate activists are spending their efforts on the wrong issue. The big disaster looming for the world is not climate change but “the economy stupid” (phrase coined by Clinton).

So let’s instead look at the real coming disaster that the world needs to focus on and a number of facts that are self-evident even though very few are aware of them.

Instead of worrying about global warming, which we humans cannot effect, we should instead issue a GLOBAL WARNING about the coming economic cataclysm so that the world can be prepared for the extremely serious problems that will hit us all in the next few years.

Below I outline a potential scenario for the next 5-10 years:

GLOBAL MARKETS ON THE CUSP OF CRASHING

The above scenario could start at any time. In many respects it has already started. The world will only be aware of the next phase when global markets start the first severe phase of the coming secular downtrend. We could see this already in October which is a notorious crash month. Or it could start as late as in early 2020. We will also start to see increased pressures in the financial system including problems in many European banks as well as US banks.

Once bubbles burst, the course of events could be very rapid. The above scenario could all happen over a few years and probably not more than five. This doesn’t mean that the economy will start recovering rapidly in five year’s time. It just means that markets and the worst problems reach a bottom. But after that the world will crawl along that bottom for many, many years.

There is no absolute protection against this scenario since it will hit all aspects of life and virtually all people. Obviously, people living off the land in remote areas will suffer less whilst people in industrial and urban areas will suffer considerably.

The best financial protection is without hesitation physical gold and some silver. These metals are critical life insurance. But there are clearly many other important areas of protection to plan for. A circle of friends and family is absolutely essential.