Buy high and sell low, that is the mantra of many stock market investors. When a stock or a market reaches a new high the average investor turns even more bullish. That is also the point when the media talk about it and it becomes headline news. This is now the situation for many stock markets worldwide. US, UK, and many European markets are now at all time highs. But the picture is not rosy everywhere. The Chinese market is 40% lower than the 2015 highs and the French, Italian and Spanish markets are around 20% below the 2015 levels. Yet, few investors in the West worry about these peripheral markets but instead focus on the US and the main European indices.

There are times when there is still upside potential in markets which are making new highs. But a market which has been rising incessantly for almost seven years and which is grossly overvalued on any criteria is certainly not a low risk investment.

Sadly, not many investors understand the notion of buying an asset which is unloved and undervalued, like gold and silver at the turn of the century. Currently all financial assets are overvalued and this is why we will see the most massive collapse of the financial system. Most sovereign bonds will go to zero as governments default or issue debt moratoria, which is a technical default, and stocks will fall by over 90% in real terms. The highly leveraged banking system will not survive the breakdown of bond and stock markets and will eventually default. But before that, panicking governments will print unlimited amounts of money in a desperate attempt to save the system. Instead of saving the financial system, the effect of the money printing will be hyperinflation and a total collapse of most currencies.

Since 1980, financial assets have become an ever increasing share of total investments. At that time real assets were almost 50% of total assets. But the money printing and credit creation in the last 36 years have pushed real assets down to just over 10% of total financial assets as the graph shows below. What is notable is that real assets in this case includes real estate. Since the property market is also a massive bubble fuelled by credit, the remaining real assets of commodities and collectibles become well under 10% of global assets.

Looking at the chart below, we see that real assets are at an all time low to total assets. This means that any investor who wants to preserve capital should exit stocks and bonds and also the property market and focus on commodities or real assets excluding real estate. 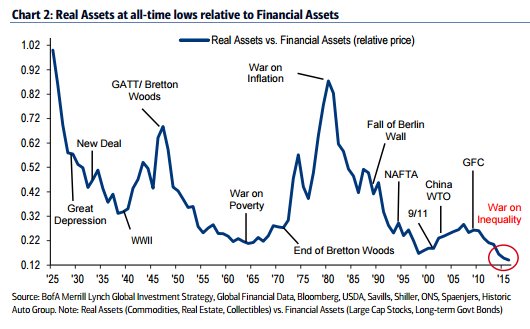 If we look at just the commodity element of real assets, we find that commodities as measured by the CRB index is at the same level today as it was in 1973. Since the 2008 high, commodities have come off a staggering 60%. In spite of massive credit expansion and money printing in the last 43 years, commodity prices are extremely depressed. The main components of the CRB are Energy (39%) and Agriculture (41%).

The CRB chart below confirms that the risk of inflation, as reflected by higher food and energy prices, is now substantial.

There is not sufficient gold in the world to satisfy such an increase in demand at the current gold price. For that gold would need to be at least 7-10 times higher than currently. 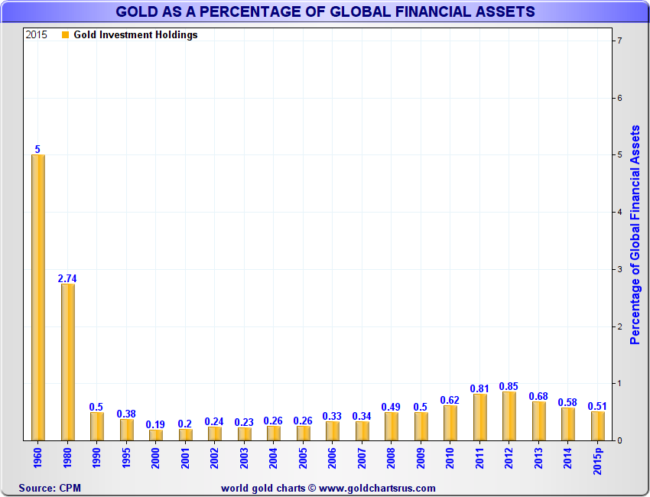 The current EU will cease to exist

The combination of economic, financial and political as well as geopolitical risk are currently at a point which at any time can trigger a major panic in the world economy. I have long been talking about the collapse of the European Union – a failed experiment conducted by the European elite. The implosion of the EU, which started with Brexit, is likely to accelerate with the elections in the Netherlands and France. Greece is on the verge of default.The only correct path for this bankrupt nation is to renege on its debt and exit the EU. Within the next five years, the EU will no longer be a powerful political union. It could within that time be in total disarray. But hopefully the European leaders will come to their senses and turn it into what it should always have been, namely a free trade area.

There are currently many potential catalysts in the world which can start the inevitable global collapse. With irreparable problems in Japan, China, Europe, the US and Emerging Markets, very little is needed to trigger the fall of the global financial system.

It is impossible to forecast if the trigger will be, for example, Trump’s tax cuts and infrastructure spending or a breakdown of the EU. The fragility and the interdependence of the world economy means that a problem anywhere in the world, will spread like wildfire around the globe. A major dollar fall, which is very likely, could be the unexpected shock in a world expecting further dollar strength. The dollar index is already down 4% since early January. Or the trigger could be upsets in the coming elections in the EU which would put major strain on Europe’s virtually bankrupt banks. Or it could be the failed Japanese economy which starts sinking into the pacific.

Whatever the catalyst is, the next phase will be a massive money printing programme leading to inflation first and soon thereafter hyperinflation. Not all assets will be affected by hyperinflation. As the charts above indicates, commodity prices, especially food, physical precious metals and precious metal stocks are likely to surge in price. But most of the assets which have boomed due to the credit bubble, which are stocks, bonds and most real estate, will not be affected by the coming hyperinflation. Instead these assets will decline 75-90% in real terms together with the debt that fuelled this bubble.

My good friend Clif High uses Predictive Linguistics to forecast major trends in the world by analysing billions of words typed by humans on the internet. It is a fascinating and a unique method which confirms what the charts tell us above. His system indicates that hyperinflation is imminent leading to a surge in gold and silver, bitcoin and also in food prices. I agree with Clif that 2017 is likely to be the year when this will all start.

As I have forecast for many years, physical gold and silver will reflect the coming upheaval in the world economy and financial system, leading to at least $10,000 gold and $500 silver in today’s money and much higher in hyperinflationary money.

Gold and silver stocks at 1983 levels

Although gold and silver stocks do not represent the same level of wealth preservation as physical gold and silver, the XAU index certainly confirms the coming surge in the precious metals. This index is currently below its inception level in 1983. Bearing in mind that the Dow is up 16X since 1983, the XAU, or gold and silver stocks index, currently represents exceptional value. In 2016 the quarterly MACD, a trend following momentum indicator, turned up for the first time since 2001-2. We are in the next five years likely to see gold and silver stocks move up at least 5-10X from here. 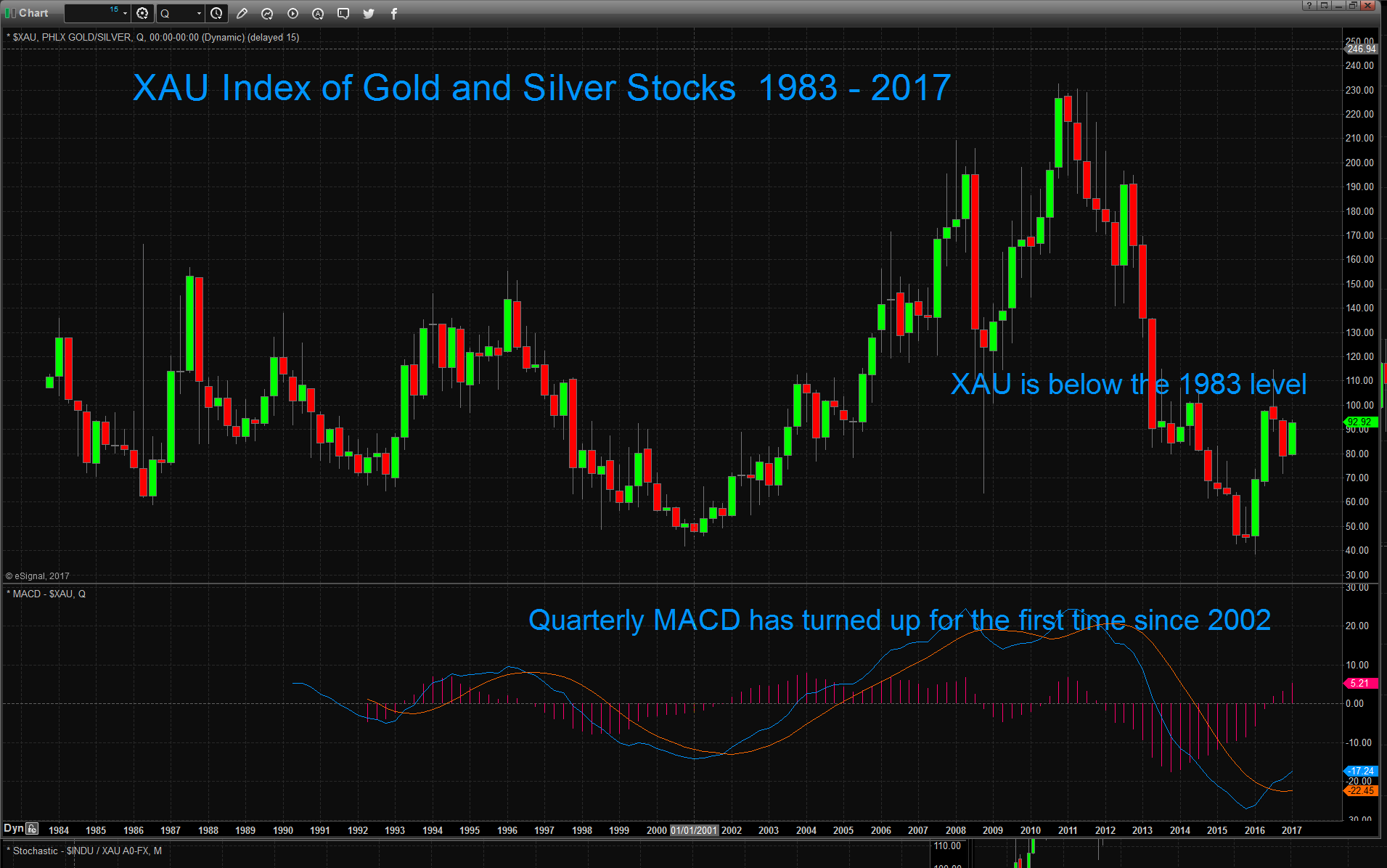 We are now at a historical point in history. In coming years we will see a destruction of wealth that the world has never before encountered. The illusory paper fortunes created by the credit bubble will be totally decimated. Very few investors will take any preventive measures to preserve their wealth. But for the small number who own gold and silver and some precious metal stocks, the coming years will not only insure their wealth but also be an investment opportunity of remarkable proportions.