Gold Is Near The 2011 Highs
By Egon von Greyerz

There are a lot of people who are concerned about the performance of gold and the fact that the price after four years of correction is still so far from the high. The mistake that most people make is to measure gold in US dollars. We are seeing currently very temporary dollar strength. But the US$ is a weak currency in a mismanaged economy. Just look at the dollar in Swiss Francs. Since 1970 the dollar has lost 77% against the Swissy. That can hardly be called dollar strength.

The dollar is a very weak currency

If we measure the dollar in real money which is gold of course, the not so mighty dollar has lost 80% in this century.

So to talk about a strong dollar is totally ridiculous. The dollar is in a long-term downtrend which will continue for many years until it reaches zero. The temporary dollar strength gives the appearance that gold is currently weak. But we must remember that gold should be measured in your home currency and not only in dollars. It is pure laziness that makes non-Americans quote gold in dollars. International media don’t make it easier since they always show the dollar price.

The US population is less than 5% of world population and most of the remaining 6.7 billion people are not linked to the dollar. If we instead use GDP as a measure, the US represents around 25% of global GDP but that still leaves 3/4 of global GDP which is not dollar based. My point is that gold in dollars is only relevant to a minority of the world and the rest of us should measure gold in our home currency.

The chart of gold in pounds below is an excellent example of the wealth preservation properties of gold. When a currency weakens, most investors don’t realise how much real value this is costing them. As opposed to most governments, gold tells the truth and the truth is that for UK citizens, their currency has lost a huge 1/3 of its purchasing power in the last 10 months measured in gold.

But it is not just gold’s performance in pounds this year which is significant. Since 1999, gold in pounds is up 6.6x. That means that the pound has lost 85% of its purchasing power when measured in gold. During the same period, the FTSE100 index has gone nowhere since it is today at the same level as it was in 1999.

UK stock market investors are deluding themselves when they believe they have preserved capital with a market that has gone sideways for 17 years when in real money – gold – they could have made almost seven times their investment. Also, since most investors around the world only look at the gold price in dollars, they believe that gold is far from the 2011 highs. But looking at the chart above, gold in pounds for example is only 8% from the September 2011 peak.

Few UK investors, and that includes institutional investors, realise that if they had just kept their funds in real money – gold – for the last 17 years, they would have outperformed all other asset classes. That trend will continue for many years as all the bubble assets such as stocks, bonds and property will lose another 50-90% against gold.

Gold is near the 2011 highs in many currencies

But it is not just in pounds gold is doing well. In many other currencies gold is near the 2011 peak. The table below shows that gold in Australian and Canadian dollars for example is only 3% and 5% respectively from the peak. 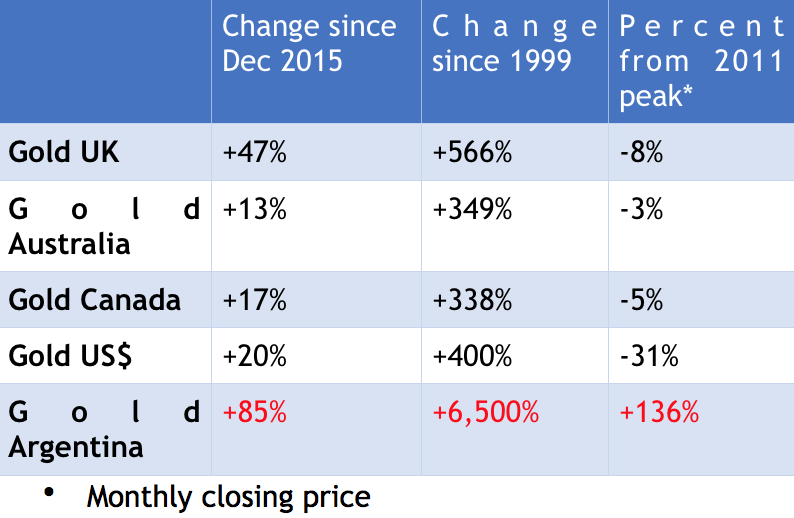 The temporary rise of the dollar gives a skewed picture of gold’s performance since the 2011 peak. The dollar’s current strength leaves gold at 31% below the peak. But this is a very temporary situation and will be rectified when the dollar starts to fall. It is possible that we will see dollar strength for a while still but thereafter the world’s reserve currency will join the race to the bottom in earnest.

I am also showing in the table what is likely to happen to gold against all currencies in coming years. Gold in Argentine pesos is up 6,500% in the last 14 years. This is what happens when governments mismanage the economy and print money to make ends meet. I expect that we will see similar percentages for the dollar, pound, euro and most currencies in the next five years.

The battle between deflation and inflation is continuing. Despite massive money printing and credit creation in many countries like Japan, China, the EU and the US, there is little sign of conventional inflation. The official figures show non-existent inflation in most countries. The fact that we have had the most incredible asset inflation in stocks, bonds and properties is not counted in these figures. Most of the printed money has pushed asset prices to levels which have made a small minority incredibly wealthy at the expense of the masses who have been landed with massive debts, both private and public.

QE to save European banks

As the European financial system is on the verge of collapse, central banks are standing ready to crank up the printing presses. These central banks are totally aware that an extended deflationary period would be the end of many major European banks and therefore also the global financial system. We are at the point now when a deflationary implosion could happen any time, caused by the collapse of Deutsche Bank or a major Italian or Spanish bank. European governments are not going to let this happen and therefore a major European and global money printing package is not far away.

My view has not changed for a very long time. I believe we will have unlimited money printing in the next few years which will lead to hyperinflation. Thereafter we are likely to see a deflationary implosion. But if I will be wrong and severe deflation comes first, the world financial system will not survive. In that case, gold will become the only money available and therefore extremely valuable. Thus, physical gold will be the best protection both against inflation and deflation.