by Egon von Greyerz – 22 August,2012
Last week was the 41st anniversary of one of the most disastrous days in world history. The 15th of August 1971 was a fatal day for the world economy and is likely to lead to more human misery than any world war. This was the day when Nixon closed the gold window which led to governments worldwide creating endless amounts of worthless paper money.
The resulting credit bubble has created a world debt exposure of over US$ 1 quadrillion (including derivatives). It has also created perceived wealth for big parts of the world‘s population – a wealth which is only backed by promises to pay and by grossly inflated assets. Few people realise that this wealth is totally illusory and will implode considerably faster than the time it took to create it.

Gold reveals governments’ deceitful actions in destroying the value of paper money and the wealth of nations. This is why most Western governments dislike gold. Because gold tells the truth and the truth is that since August 1971 the US dollar has declined 98% in real terms. 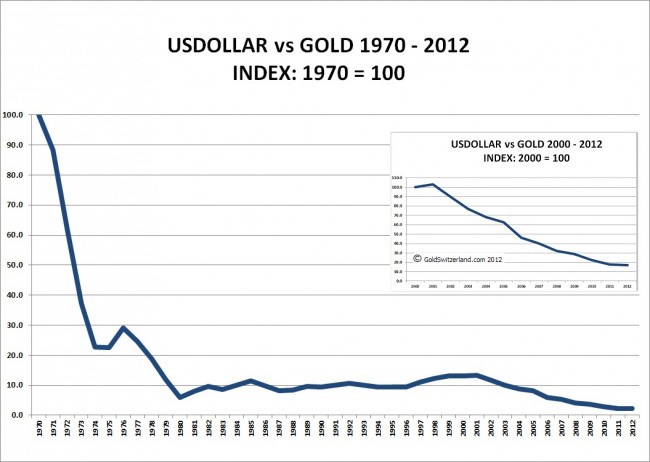 Real terms means in GOLD since gold is the only money which cannot be printed and which has survived for 5,000 years.

As Voltaire said in 1729; All paper money eventually returns to its intrinsic value – ZERO.

Before this debt cycle comes to an end in the next few years, the dollar and most major currencies are likely to finish their move down against gold and lose 100% of their value. Since 98 % has already been lost in the last forty-one years, there is really not far to go. The final fall of currencies will be as a result of the unlimited money printing that governments will embark upon in the next few months in order to endeavour to “save” the world economy. But money printing does not save anything. It just exacerbates the situation. You cannot ever become debt free by issuing more debt and you cannot create prosperity with worthless pieces of paper.

The system is bankrupt

There has never before been a time in history when most sovereign nations are bankrupt and when the financial system only survives due to false accounting. (Banks are allowed to value worthless toxic debt at maturity value rather than market value). So sadly we are now likely to start the next phase in the world economy which is a hyperinflationary depression. Hyperinflation arises as a result of money printing which leads to the currency collapsing. Whilst the price of most goods and services go up dramatically with hyperinflation, most of the assets that were financed by the credit bubble like stocks, bonds and property will collapse in real terms i.e. against gold.

Europe vs the USA

For the last couple of years, all the focus has been on the travails of the Eurozone countries. The Eurozone individual members’ dilemma is that, unlike the USA, they cannot print money. German political pressure stops that country from printing money for the Greeks to retire at 55 or to support the Spanish banks from collapsing. Germany is in a massive dilemma because if they contribute to the Eurozone’s money printing, they will increase their exposure and throw good money after bad. Also, it would be unacceptable politically. But if they don’t print, the German government and banks are likely to lose in excess of €1 trillion which is their total exposure to the weaker European economies. Thus a virtual lose – lose dilemma for Germany.

The focus on the Eurozone countries will soon move West across the pond. Virtually every important economic figure in the USA is worse than in Europe. Both US debt to GDP and budget deficit to GDP are worse than Spain’s. And Spain is seen as a basket case. Real US unemployment (23%) is also much worse than in most European countries. Also, if toxic debt and derivatives are included, US bank balance sheets are looking very sick.  JP Morgan alone has a $100 trillion derivative exposure. And we know how quickly derivatives become worthless with JPM’s latest $6 billion write off. In addition, the US annual federal deficit is likely to remain in the trillions for many, many years to come. These amounts dwarf anything happening in Europe.

As the focus shifts to the USA during the autumn, there will be pressure on the US dollar which eventually will put strong upward pressure on interest rates. The free money bonanza with zero interest rates will come to an end with US rates (and others) soon starting their journey to double figures. Governments and central bankers must have thought that they had invented a financial Perpetuum Mobile. First you set interest rates at zero and then you print and borrow unlimited amounts of money since it is all free. This way we can all experience Shangri-la. But sadly, governments have not reinvented paradise but only been busy creating a fraudulent Ponzi scheme. And like all Ponzi schemes this one will also collapse which will create worldwide social and economic misery for many generations to come.

Gold and Silver breaking out

Physical precious metals as well as PM stocks will continue to reflect the destruction of paper money.  As I discussed in my recent article “Why Gold will erupt“, gold and silver have now started a major move to the upside. This move will be relentless with only minor corrections before we reach $4,500 to $5,000 in gold and substantially over $100 in silver.

Investors now have a last chance to invest in gold and silver at prices which will never be seen again. But for wealth preservation purposes it must be physical metals and it must be stored outside the fragile banking system.

Weekly updates with KWN
In weekly interviews with Eric King of King World News Egon von Greyerz covers events in the world economy and the precious metals market.
Click here for the most recent audio interview.