In short, the world is in flux, the mess is everywhere and gold is already flexing.

Fed Vice Chair Lael Brainard, a former money-printing dove who helped pour trillions of liquidity into the biggest risk asset bubble and wealth transfer in US history, is suddenly realizing that perhaps she and the FOMC may have gone too far as their open stock market inflation now morphs into just plain everywhere-inflation (and an 8+% CPI). 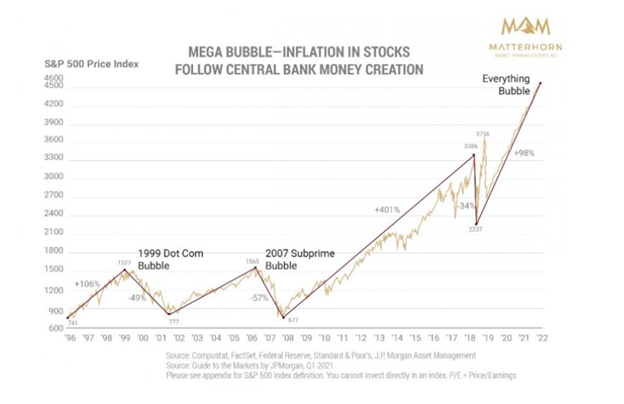 She is now puffing a Hawkish chest and citing the good ol’ days of Paul Volcker rate-hiking as the kind of tough restraint needed in 2022.

But such a pivot is the equivalent of the Titanic’s captain ordering more lifeboats after the ship has already sunk.

In short, if hypocrisy had a face, and if market comedy a punch-line, surely Brainard (along-side Kashkari, Powell, Yellen, Goldman Sachs and Bridgewater) would qualify for the top-10 list.

The “Greatest Threat to the Economy”? Inflation or the Fed Itself?

In a recent speech, Brainard reminded the audience of Volcker’s warning that runaway inflation “would be the greatest threat to the economy…and ultimately employment.”

The irony, however, lies in the fact that the Fed (after years of expanding the broad money supply and mouse-click-creating trillions of dollars to buy otherwise unwanted US IOUs) is the very author of this inflation and, by extension, is itself, “the greatest threat to the economy.”

Today, the inflationary hens hatched directly from years of DC’s own spend-and-print policies are now coming home to roost.

As 1) defense and entitlement spending reaches all-time highs of 120% of record-high tax receipts and 2) the Fed balance sheet climbs >10X from a pre-08 number of $800B to a 2022 level of $9T, Fed-driven inflation has emerged not as a surprising or mysterious aberration but as an obvious, predictable and direct consequence of the Fed itself.

In short, former doves like Brainard citing hawks like Volcker to solve their banking policies is akin to Lance Armstrong citing Mother Theresa to defend his biking policies.

Brainless Bravado Rather than Honest Transparency

But in a never-ending effort to signal form over substance and spin over facts, Brainard somehow thinks that the US, with 90T in combined household, corporate and public debt, needs to get “Volcker-tough” on combatting the very inflation she helped create.

But we aren’t in the 1970’s anymore. Things, and debt levels, have changed.

The obvious problem with Brainard’s brainless bravado is that the Federal debt when Volcker raised rates to 20% in 1980 was $908 B; today that national debt figure is over $30 T.

Folks, when saddled by such unprecedented and unpayable debt levels, do you think Uncle Sam can afford to raise rates (i.e., the cost of that debt) without eventually mouse-clicking more debased dollars out of thin air to then pay for it?

Well, the answer we’ll give you is far blunter and more accurate than Brainard’s.

And it boils to this: Nope. It can’t be done—not without ushering a financial recession and market implosion or debasing the dollar with trillions of more fake liquidity.

But if accuracy, candor and intelligent accountability is something you are hoping to find from so-called “experts” like Brainard, we’d remind you again to look elsewhere.

As for Brainard’s expertise (and fork-tongued inaccuracies), it’s worth reminding that: 1) in 2020 she supported inflation “running hot;” 2) in early 2021, she said the Fed’s inflation expectations “were extremely well-anchored,” and then, 3) at the end of that same year, said “I expect inflation to decelerate.”

Yet just last week, in 2022, Brainard finally confessed that “inflation is too high”?

Again, so much for trusting the “experts.”

As for us, we warned of the coming and persistent (rather than “transitory”) inflation long before the Fed-Heads would even discuss the inflation reality.

In those same years, we also consistently declared that a cornered Fed can not raise rates and cut money printing to become net sellers (as opposed to former top buyers) of UST without causing formerly – “accommodated’ bonds to tank and hence yields (and thus interest rates) to spike.

And precisely as forecasted, that’s what’s taking place now as rising rates, like rising shark fins, slowly approach the sinking ship that is the bankrupt US economy.

The Fed has pivoted from being the largest buyer of Treasuries to a seller of Treasuries (i.e., Uncle Sam’s IOUs) at the very same time that Uncle Sam is issuing record amounts of those very same IOUs (i.e., borrowing like mad) during the worst inflationary period seen in 40 years.

You literally can’t make this kind of insanity up: One part of DC is borrowing at record levels while across the Street, the Fed is tightening the cash spigot.

Such open confusion, bi-polar policy swings, and exhaustion of any viable/remaining alternatives is going to end very badly for markets and the economy as yields spike and hence the USD, on a relative rather than inherent basis, gets stronger.

By the way, a stronger USD just makes US goods less competitive overseas and worsens US trade deficits—thereby adding more insult to an already injured US GDP.

In short, this perfect and Fed-made disaster is taking place in real time while double-speakers like Brainard stand with a chest puffed yet a back against a wall of their own making.

Given the fatal debt timebombs which the Fed alone unleashed since the Greenspan era, it has cornered itself into a prisoner’s dilemma of either: A) runaway inflation if they don’t raise rates or B) a market implosion if they do.

Sadly, we think the world is about to see both.

The Fed’s Real Mandate Makes Them Easy to Predict

As we have also transparently warned, the Fed’s real mandate is the markets not inflation or the man on the street.

The Fed is already fattening its Standard Repo Facility (SRF) in order to bail out the unloved Treasury market whenever the emergency bell rings in the bond pits. 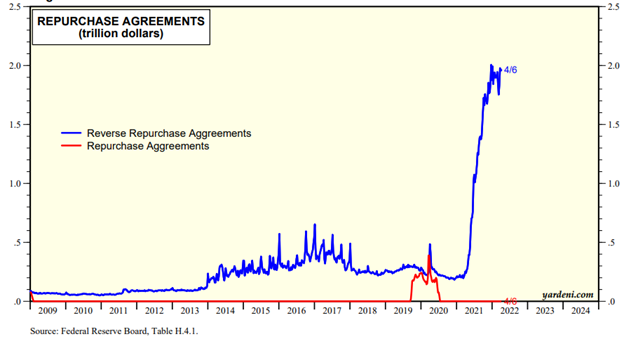 In short, and despite talking hawkish, the SRF is open proof that the Fed is fully dovish when it comes to cooing over Mr. Market.

In plain-speak, when push comes to shove, the FOMC favors Wall Street over Main Steet—always has, always will.

The Market is the Thing

The Fed thinks a rising stock market will stimulate consumer spending, which is 70% of its GDP score as well as the core driver of Uncle Sam’s much needed tax receipts.

After all, Net Capital Gains and IRA Distributions are the 200% wind beneath the wings of consumer spending’s annual growth. 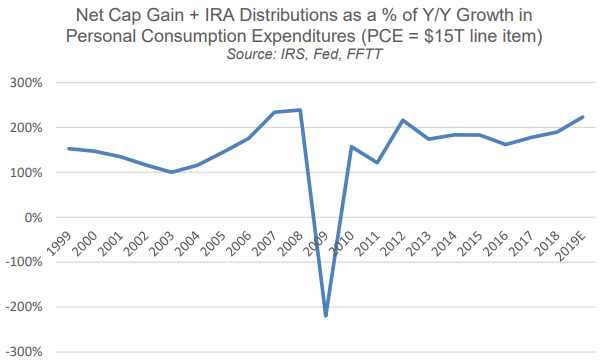 Given that the US has off-shored its productivity to places like China, the fully bloated and grotesquely distorted stock market is about the only bragging right Uncle Sam has left.

Hence, the Fed’s shadow mandate is to save that market, even at the expense of inflationary suffering on Main Street.

But as we’ve also consistently warned, the Fed’s track record for going too far is long and distinguished, and despite all their twisted (and rigged) efforts, they always fail in preventing market implosions of their own making.

Thus, Wall Street and Main Street can and will suffer together, and the Fed, like our markets, truly are Rigged to Fail.

For now, the Fed is trying to prop the market in secret while simultaneously claiming to fight inflation in public.

This behavior of inflating away debt in practice while publicly claiming to “combat” it is just another classic Fed ruse.

More, rather than less, inflation is ahead—which is why gold (and miners) will rise despite a relatively stronger USD.

But shouldn’t a stronger USD bode poorly for gold?

That is, shouldn’t rapidly rising real yields be bad for gold, which, as we’ve argued for years, favors negative real real yields?

Not necessarily, and not in this totally distorted new-abnormal.

When the dollar is so fully debased, distrusted and set for a fall, and when rising yields bankrupt Uncle Sam, all the old rules change.

The traditional correlations and inverse relationships mean nothing anymore for the simple reason that nothing is normal anymore—thanks to years of central bank folly, political (spending) decadence, record-breaking debt expansion and a global addiction to printed currencies.

And as for money printing, more is on the way because central banks in general, and the Fed in particular, have no choice but to eventually create more diluted dollars.

And the market now knows what double-speakers like Yellen, Powell, Brainard and others won’t confess, namely: That as soon as the economy and markets begin to tank in this raising yield/rate environment, the Fed (and other central banks) will be forced to print (i.e., debase) more inflationary money and impose Yield Curve Controls (YCC) to stem the financial bleeding that always follows a rate hike.

In short, and as forewarned long ago, get ready for far more, rather than less, centralized controls over your money, economy, market and lives.

Such inevitable bond market disasters, yield spikes and subsequent money printing and YCC is why gold is rising and gold miners like Newmont are seeing all-time highs despite a rising USD.

A World in Flux

Meanwhile, as Western central bankers try to manage the optics of their increasingly discredited and disastrous policies (i.e., blaming everything on a politicized pandemic and an avoidable war), the world is rapidly moving in a new direction.

This direction is sailing away from the world reserve currency in general and western financial controls in particular, all of which we’ve warned would happen as the West shot itself in the foot with sanctions otherwise aimed at Russia’s chest.

As warned, Putin is moving closer toward the world he and China have otherwise been telegraphing for years—one in which the USD is no longer the only core player.

Squeezed by SWIFT, SDR and FX Reserve sanctions, Russia is now demanding payments for its resources in RUB rather USD from a growing list of states “unfriendly” to Russia.

In short, we poked a bear and now it’s biting us in the tail…

Unlike the post-Nixon West, Putin is also flirting with what wiser economists have hoped other nations would do, namely partially link its currency to gold rather than thin air.

Russia’s central bank has been buying gold at 5000 RUB per gram.

Folks, this flirtation with a gold-currency cover represents a massive shift in history in general and global markets in particular. DO NOT underestimate its implications.

As nations like Russia, China and India slowly move toward and consider a partial-cover of their currencies in gold, the gold price will rise in ways that not even the BIS or its minions in that thoroughly corrupted COMEX market can manipulate downwards.

The West Is Trapped

It seems the West, by failing to find a diplomatic solution in the Ukraine, has fallen straight into a Putin trap, which was so openly foreseeable.

I mean honestly, did the West really think Putin would simply collapse under sanctions he was already prepared to weather and counter-punch?

Unless the US can convince the EU to fully end its reliance on Russian energy (good luck with that), Putin, the chess player we’ve warned of, will have the checker-players in DC and Brussels bouncing off the walls.

In the end, the West has no options going forward (full ban of Russian purchases [?], capital controls with Chinese/Indian consent [?] or admit defeat and end Russian sanctions [?]) that won’t financially cripple western citizens from Austria to Atlanta.

As we’ve argued recently, the sanction genie can’t be put back into the bottle, and the world is now slowly marching toward a commodity-backed rather than “faith” backed currency system, which is running out of faith which each passing day.