by Egon von Greyerz – May 2012
The precious metals markets have now been going sideways for around 7 months. No investors like corrections but in all bull markets there will always be periods when the price corrects. Some of these moves are bigger like in 2008 when gold in dollar terms corrected by 34% from $1,032 to $681. Silver which is always more volatile corrected by 60% in 2008.

The correction, in dollar terms, is so far 17% in gold and in silver 42% . In Euros gold is down only 10%. If we look at the long term charts of gold starting back in 1999, these corrections look like at little wiggle at the top of the chart. Thus the correction in gold is totally insignificant in this major bull market and absolutely nothing to be concerned about. 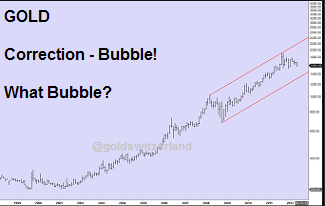 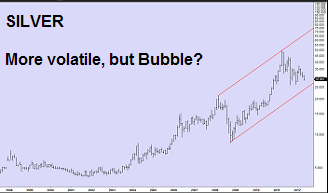 The physical precious metals market is still very strong with Swiss refiners working around the clock and central banks around the world continuing to buy. Chinese imports this year so far are up 6 times on last year. The selling that we are currently seeing is primarily in the gold paper market. This is short term speculators in precious metals that are getting out of their positions. We saw the same in the 2008 correction when gold came down as many investors liquidated positions in all investment classes. So the real gold market continues to be very strong and at some point the paper gold market will be exposed for what it is; worthless paper with no gold backing.
I can understand that investors who entered the gold market in the $1,600 to $1,900 range might feel a little bit uncomfortable at these levels. And even at the current price of $1,585 there might be a further downside risk of $50-$100 at the very most. But the upside in the next few years is likely to be in excess of $10,000 as I have been forecasting for many years and it could be a lot higher depending on how fast governments will run the printing presses.
As I said in my King World News interview yesterday all the dominoes are falling as predicted which will necessitate unlimited money printing. Just in the last few days we have seen Greek and French voters throwing out austerity programmes and we have also seen a Spanish bank having to be saved again. All of this is very bullish for gold and silver in the longer term.
Link to the KWN interview
More importantly, a very big domino fell yesterday with JP Morgan having lost US$ 2 billion on a derivative position that was taken to hedge their portfolio. JP Morgan do not even know the size of their exposure but they admit that their losses could be a lot bigger. (No doubt the rocket science employee who lost this amount in the bank’s London office has been earning millions in bonuses every year for taking positions that nobody understood).
I have warned investors for more than a decade that the current $1 quadrillion plus (the $700 trillion figure is incorrect) of outstanding derivatives is a timebomb of colossal magnitude. It is guaranteed that we will see losses in the trillions in the next few years. That is why wealth preservation is so critical and investors should not worry about a relatively small correction in the price of precious metals. The most important investment you can hold today is physical gold and silver stored outside the banking system. This is the only investment that protects your wealth against the destruction in value of most asset including paper money and also avoids counterparty risk. Investments within the banking system will always involve major counterparty risk. And with most banks having massive toxic loan books with nowhere near adequate provisions and derivatives in the trillions with no provisions, the whole financial system is today extremely fragile. Central banks and governments are fully aware that without money printing in the trillions of dollars and more likely in the tens of trillions, the banking system is unlikely to survive.
So if investors are nervous about this correction in gold and silver, take my advice; stop looking at the price and go on holiday. Economically and socially times will soon be a lot worse so enjoy the “good times” when you still can.
Egon von Greyerz