There is a ridiculous amount of time spent on what the Fed will do or won’t do or analysing the latest economic figures. Very few people use their own brain to figure out the obvious. And the obvious is that debt which has been growing exponentially in the last 40 years, started its parabolic phase in 2006 when Bernanke became chairman of the Fed. So we don’t have to ask what central banks will do. Because it is guaranteed that they will soon start unlimited money printing to complete the debt parabola.

That means we are now starting the hyperinflationary phase in the USA and many other countries. And this will all start in 2014. What will be the trigger? The answer is simple – the fall of the US dollar.

Hyperinflation is a currency event. It does not arise as a result of increase in demand but as the inevitable consequence of a collapsing currency. When a country for an extended period lives above its means and prints money which it can never pay back, the rest of the world will punish the country and its currency. It took the US over 200 years to reach a debt of US$8 trillion. Since Bernanke became chairman of the Fed in 2006, US debt has more than doubled to $17 trillion. That is an incredible ‘achievement’ and the beginning of the parabolic rise of US debt not by tens of trillions but by 100 of trillions of dollars. This is no different to the Weimar Republic or Zimbabwe and a completely natural consequence of what is happening now.

The Euro which is a rubbish currency is up 8% against the dollar since July and over 65% since 2000. So even against another weak currency, the dollar is losing ground rapidly.  And in real terms which of course is gold, the dollar has lost 98% since the creation of the Fed in 1913.

So the dollar fall has started and will accelerate in the next few months as well as during 2014.

In history there has never been a situation when most major economies are in the same dire situation. Japan is a basket case with 200% debt to GDP and a rapidly aging population. China has a major credit bubble. Most of Europe is badly indebted with high unemployment and a social structure which makes it very uncompetitive. So there is no nation which could save indebted governments worldwide. Add to that a banking system which is still full of toxic debt and highly leveraged and we have the perfect concoction for the end of a major economic cycle in the world. 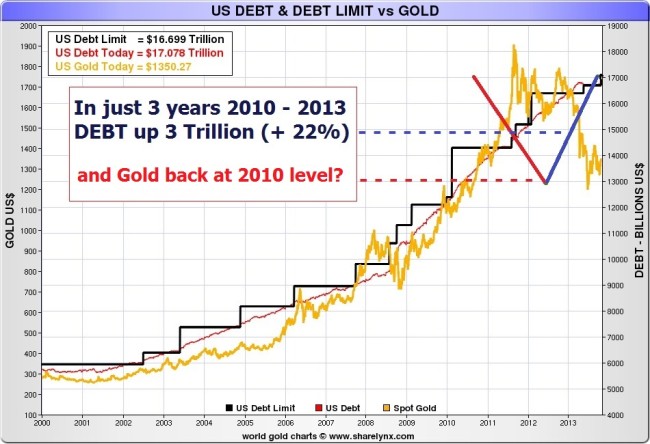 For the few investors who are fortunate to have some savings to protect, physical gold (stored outside the banking system) will perfectly reflect the fall of the dollar and other currencies by rising parabolically in the next few years.

In my King World News on 25 October, I covered some of the above topics plus other things.

Link to: “Horrific Consequences For the US & For The World”