Last week I wrote an article for King World News which showed that hyperinflation is on its way in many emerging markets. Soon it will also reach the US, Europe, Japan, China and many other countries.

Hyperinflation has nothing to do with demand but is the effect of economic mismanagement leading to money printing and currency collapse. This trend started over 100 years ago with the creation of the Fed. Since then all major currencies have declined 97-99% in real terms. The best way to measure inflation over time is in gold. For 5,000 years, gold is the only currency that has survived. All other currencies have been printed to death.

The trend of currency debasement is now accelerating in the periphery. For example, in Russian Rubles and Brazilian Real gold is up 1,300% in 16 years and in Argentine Pesos gold is up 6,000% since 1999. Also, gold now buys more oil than it has ever done in history.

The chart below shows the effect that collapsing commodity prices have had on a resource economy like South Africa with gold up 1,200% against the Rand. 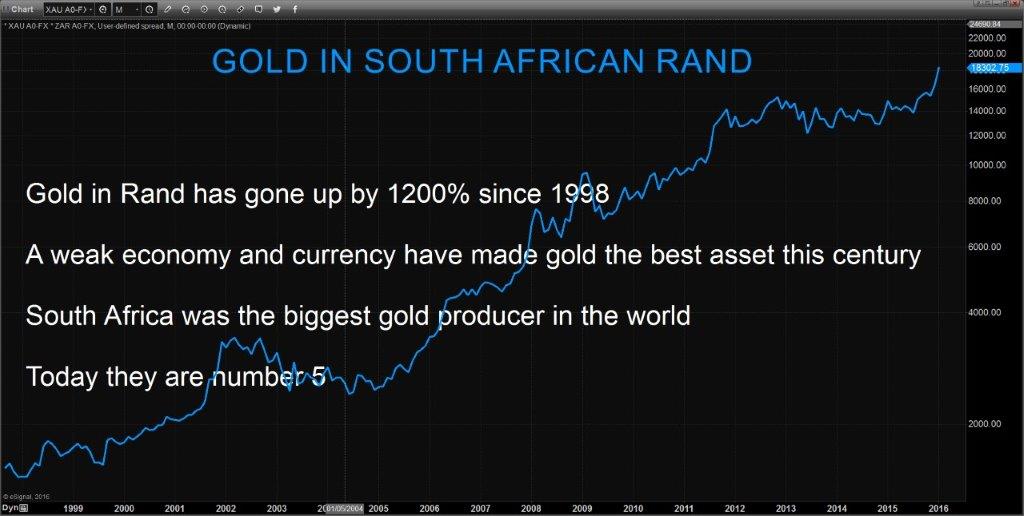 Central banks around the world will soon start their futile attempts to prevent the credit bubble to implode and their chosen bet is massive money printing.

Sprott’s John Embry quoted me in his King World News on January 19:

“I would encourage all KWN readers and listeners to ignore the predictable and ludicrous price action currently going on in today’s market.  And rather, go back and re-read the words of Egon von Greyerz’s this past weekend. Seldom have I ever read such a succinct and brilliant analysis of the true state of the world and the global markets.  The many people out there who have their heads buried in the sand should take heed of Egon’s words or they are going to be in for a very uncomfortable comeuppance.”

In his interview he was very generous and a bit too complementary about my last KWN article.
But I do agree with him that it is critical for investors to understand what the likely outcome will be of the world’s economic problems.

To read my KWN article please follow this link