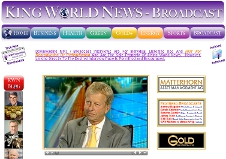 In this 2013 outlook interview Egon von Greyerz discusses with Eric King the important monetary developments and experiments in recent years that have become major catalysts for today’s politically, financially and socially crumbling societies.

Egon explains how and why Japan, being the third largest economy in the world, will join the currency race to the bottom by printing unlimited amounts of money.

The next important area that Egon raises is the US fiscal cliff which he says is like rearranging the deck chairs on the Titanic whilst the boat is sinking.
The USA Fiscal cliff policy note is about saving 1.2 trillion dollars over ten years. This is an average of 120 billion dollars per year, most of it back loaded. Saving 120 billion a year is an insignificant amount compared to the US deficit including unfunded liabilities having gone up by 7 trillion in 2012 alone. They are tinkering around the edges as the country is sinking.

Egon also mentions LIBOR, derivatives and the manipulation of markets which have a major influence on world events. UBS has just been fined 1.5 Billion for manipulating the LIBOR rate. LIBOR is used to calculate the value of many financial products including all derivatives. It is just the tip of the iceberg as market manipulation is seen everywhere.

Some pension funds in Japan are already increasing their gold holding to between 1.5 and 3% against an institutional worldwide average of only 0.3%. Institutions will need to increase their holding in Gold to protect against inflation. And as long as governments continue to print money, which is guaranteed, this will be reflected in the price of gold.

Physical Gold outside the banking system is the only option for full protection.

Click here to listen to the interview as published by KWN on Dec 25.