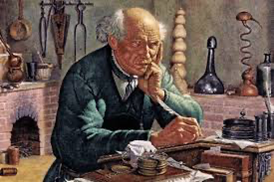 “All things are poison and nothing is without poison; only the dose makes a thing not poison”. These words were expressed by the famous Swiss physician and scientist Paracelsus in the 16th century.

This week I will discuss two poisonous areas; a toxic derivatives market in silver and ubiquitous fake silver coins and bars.

But first a few words about the dollar.

The most blatant toxic forgery is carried out by central banks around the world. These banks manufacture $ tens of trillions of fiat paper or electronic entries and then tell the people that it is real money.

If ordinary people would print money, the forgers would go to jail and the money destroyed as it is fake and worthless.

But when central banks print money, no one goes to jail. Instead they tell us that this money has the same value as the money already in circulation.

Take the dollar – in real terms it has lost 98% since 1971. So all the dollars circulating are virtually worthless. Thus not much different to freshly printed dollars which are also worthless.

In the next 4 years the BY team (Biden&Yellen) will most probably be the ones who fulfil Voltaire’s prediction in 1729 that “Paper Money Eventually Returns To Its Intrinsic Value – ZERO”.

Like Matt Piepenburg and myself, Voltaire knew he would be right because history has 100s of examples of governments and central banks destroying the currency.

Biden/Yellen don’t really need to do much since the dollar is already down 99% since 1913. So all they will do is to push it down another one percent. But we must remember that this one percent is actually 100% loss of value from today.

From the day the Fed was founded in 1913, the dollar’s demise was already written in the history books. And Biden/Yellen is the perfect team to be the executor of history as they drive the dollar to ZERO within the next 4 years.

Financial markets suffer from the wrong dose of poison. Trading financial instruments in the right dose is essential for efficient markets. But the heavily leveraged markets are extremely toxic and kill the weaker patients. And this is the kind of rigged market where the normal investor and small trader has no chance against big players be they hedge funds or central banks.

We have just seen how the Reddit group Wallstreetbets has taken on the big hedge fund boys. This Reddit forum is where a very great number of smaller traders discuss investments and interesting trades.

Will the Wallstreetbets group succeed in an attack on the massive silver shorts?
I will discuss this at the end of the article as well as their chances of success.

Very few have avoided to notice how Wallstreetbets last week attacked Gamestop which was very heavily shorted by the hedge funds. The price went form $19 in early January and settled at $325 last Friday after having reached $350. One trader is said to have made $46 million on a $50,000 bet.

This is real David and Goliath stuff when small traders take on the hedge funds in their own game. Some hedge funds are said to have lost billions of dollars and very few people feel sorry for them. The Schadenfreude (gloating) is very apparent.

Let’s first look at a toxic material that is distributed widely and could flood global markets in the next few years.

I am talking about fake gold and silver that could become a real pest.

But greed is such a powerful driver that once you discover that people fall for your forgery, the Ponzi scheme grows extremely fast.

We are regularly informed of fake gold and silver bars and coins, mainly coming from China.

Recently an old and trustworthy contact of mine informed me about his experience in buying silver coins from China on a website like the one below. He spent very little money, just to test the authenticity of the coins.

Due to rising metal prices, there are lots of online ads for US silver dollar coins like American Eagles, Peace dollars and Morgan silver dollars. The sellers are mainly in China.

My friend ordered the coins from China and when they finally arrived – low and behold, they were found to contain virtually no silver except for the surface coating. This after thorough testing.

The coins came from Shenzhen in China. My friend reported his findings to local authorities and the Secret Service and the site is now closed. But like a lot of these counterfeiters, they will most certainly pop up in a different name.

To buy US silver coins from China is clearly a red flag already. But since the Chinese are very big buyers of gold and silver, there are a lot of foreign coins on offer and obviously not all are fake.

I had first hand information about a case of fake Chinese gold a few years ago. I was in Sydney and interviewed by Channel 7, an Australian news television channel. The news crew had just come back from China where they visited a Chinese gold factory.

In the factory they covertly filmed the vast offer of gold coins and bars with perfect markings from the major refiners in Switzerland, Australia and elsewhere. They bought $1/2 million worth of bars and coins for $500.

For a layman, there was no chance of telling that the gold was fake.

So these are just two examples of fake gold and silver coming out of China.

These fake bars and coins are sold over the internet, not just from China but anywhere in the world. But they can also be sold directly by rogue traders in any country.

There is less chance that these metals reach the well established chain of integrity between LBMA refiners and reputable sellers and vaults.

But the risk is there and even JP Morgan has reported bars with fake logos in their vaults.

In order to ensure the quality of gold we purchase for our clients, we always buy new bars or coins directly from the Swiss refiners.

If the client sells his gold, we sell it back to the Swiss refiner who melts it down and recasts it. Even if the same gold was sold the previous day by the refiner, they will always refine it again. This totally guarantees the quality of the gold and the integrity of Swiss gold.

FAKE GOLD AND SILVER WILL BECOME A MAJOR POISON

The obvious conclusion for buyers of gold and silver is to only deal with sellers of the highest reputation. It is preferable to buy fresh bars and coins but this is not easy to verify for an amateur.

As the price of the precious metals increase, there will be many new gold and silver “factories” popping up in China and many other countries in Asia.

This will create a major supply of fake gold and silver from all parts of the world.

These fake products will be distributed via the internet and also flood the retail market in many countries and be a real poison for buyers of precious metals.

So dealing with reputable companies is a Sine Qua Non!

Finally, we have reached the end of the first month of 2021.

In stocks I have in recent articles indicated that the long term secular top could occur in January. This link shows a very important 50 year Dow chart in my article. The second article has two equally important charts of the Dow/Gold ratio which is about to crash.

Our proprietary cycles forecast in early October that the charts of the weekly Nasdaq 100 and Dow would form important tops in the week Jan 18-22.

So far this forecast is correct. If that is confirmed in the next couple of weeks, we are likely to see the beginning of a major secular bear market with potential dramatic crashes.

Even if the big fall in the Dow and the Dow/Gold ratio will come slightly later, it is virtually guaranteed to happen in the next few months. And that will be the end of a spectacular period of debt, fake money and toxic markets.

The ultimate insurance against a total destruction of your wealth, is obviously physical gold and silver stored outside the financial system.

Bitcoin might be a good speculative investment and might also work as a payment method if central banks don’t ban it. But it has nothing to do with real wealth preservation.

Silver is normally the leading indicator for the precious metals.

Following the spectacular short squeeze in Gamestop by the Reddit group Wallstreetbets, there is now speculation that the same could happen with silver.

Yes, everything is possible. But remember that in the gold and silver markets, against the Reddit players there will be:

The BIS (Bank of International Settlement),

The Fed, ECB and other central banks

Plus the bullion banks

So a lot of fire power to beat compared to the Gamestop opposition.

SILVER – THE INVESTMENT OF THE DECADE

The silver market is one of the most toxic of all. Heavily manipulated and with bullion banks now being 100 million oz of silver short on Comex and with no liquidity in London, as Alasdair Macleod has pointed out.

Still, even if not in the next week or two, silver will win this game in the medium and long term as the dosage of paper silver shorts is much too big to survive a short squeeze. 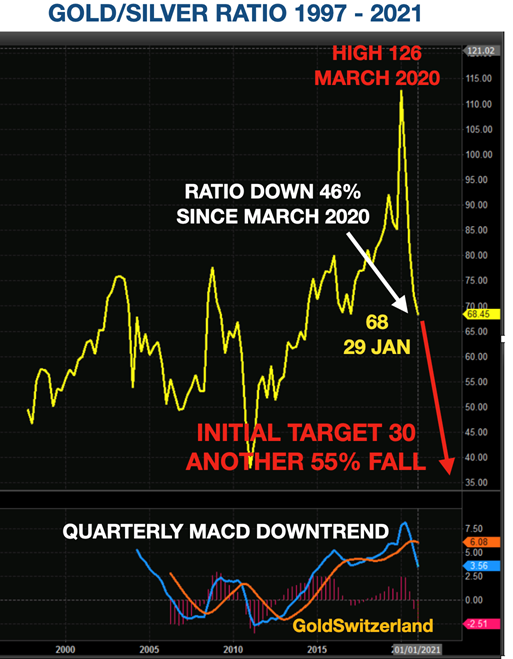 So silver will lead the metals and the gold/silver ratio, now at 67, will initially reach 30 like. The long term target is likely to be a lot lower, probably 15 or below.

Expect 2021 to be the year when investors wake up to the fact that gold is not a barbarous relic but actually the best wealth protection you can hold and silver the investment of the decade, as I outlined in my October article.