The more things change, the more they stay the same

No, nothing new. More QE and gold goes down. In addition,  another downpour of economic news that confirms the total inability of central banks and governments to provide any credible solution to what is a guaranteed road to perdition.

Investors worldwide are continuing to buy debt that yields nothing or virtually nothing from bankrupt issuers. The only thing that is guaranteed is that the bond market, which is the most over overvalued market in the world,  will default. This is particularly the case with the government bond market where government deficits are increasing so fast that the only buyer remaining will be the issuer of the bonds. But also mortgage bond yields  have fallen to their lowest level ever recorded. And spreads on corporate debt have narrowed to the wafer thin margins of 2007 in spite of the fact that default rates are three times higher than they were in 2007 for twice as high investment grade companies. Thus it is almost guaranteed that bond investors will lose most, if not all of their investment.  Even the BIS in Switzerland has woken up to the fact that the world risks a fresh credit bubble.

So what are the powers that be doing about it. Well, the EU has finally agreed to appoint the ECB as “the single supervisory mechanism” for the supervision of the 200 largest EU banks. This will be another failed EU organisation that will create a massive, bureaucratic structure (to be based in France) whose main beneficiaries will be its employees who will earn massive tax free salaries and unlimited benefits and perks. As regards the regulated European Banks, they are bankrupt and will remain bankrupt. All the supervisory commission can do and will do is to recommend for ever increasing money printing by the ECB to “save” these banks from the sensible thing to do which is to close down for good. If they ever valued their asset at market prices that would be their only option.

On the other side of the pond, the Fed did what was expected and announced an annual asset purchase program of over $ 1 trillion. With this money the Fed will buy worthless bonds that will make their balance sheet worth less than zero. Since the Fed is private, maybe a hedge fund will one day be paid a handsome amount to take it over. But the Fed is not alone. Most central banks are doing the same. It is just that the US figures are so much bigger. The $ 1 trillion+ that the Fed will print next year is of course in addition to the US budget deficit of $ 1.5 trillion or so.

The US now has a National Debt of  $ 16.4  trillion and over $ 225 trillion of Federal entitlement liabilities. With 125 million people on benefits and 22% unemployed the situation is more than serious – it is desperate.

With this desperate economic situation, most people expected a different reaction to the Fed’s money printing announcement on  12.12.12. But we should have learnt by now that markets always do what they should do but not when we expect them to. Gold and silver went up on the Fed announcement but sold off afterwards and continued to be under pressure on the 13th.  Let us just remember that all we are seeing are little wiggles in a major secular bull market in the metals.

In the last 100 years since the creation of the Fed in 1913, the dollar and most other currencies have fallen 97-99%. So we only have a 1-3% fall left to reach a total collapse of the current monetary system. That is likely to happen in the next few years. 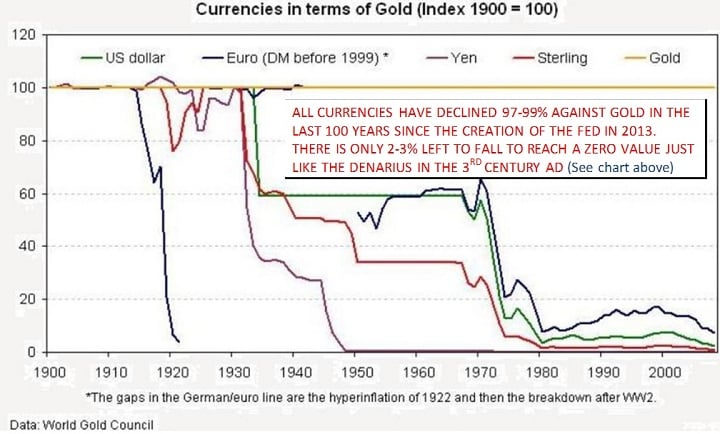 For investors who are concerned that the gold price is not going up fast enough, I stress time and time again that gold will continue to reflect the accelerating money printing worldwide. Below I show a chart of the US Debt Ceiling (courtesy Nick Laird, sharelynx.com) vs. the gold price. The debt ceiling has increased around 150 times since 1917. It is absolutely guaranteed that it will continue to increase in the next few years in parallel with the increase in debt. This means that it is also guaranteed that the price of gold will go up in coming years. 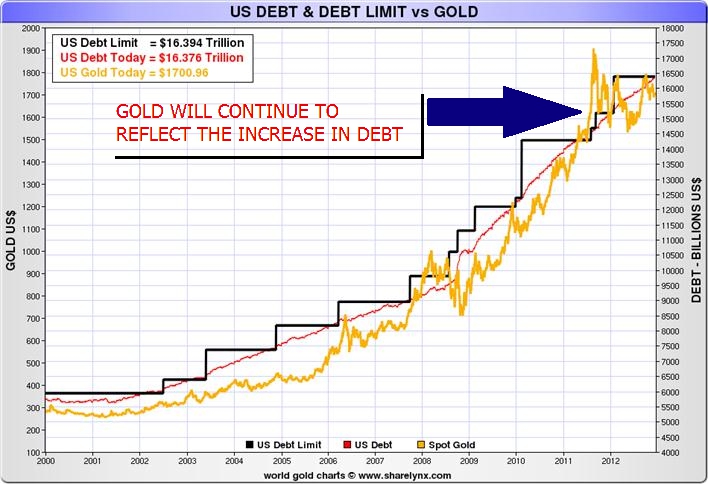 Although gold (and silver) didn’t go up in the last couple of days, it is absolutely guaranteed that the continued destruction of paper money will lead to substantially higher prices in the precious metals. But remember you have to hold physical metals and store them outside the banking system.