During the 2006-9 financial crisis, a collapse of the global financial system was avoided by massive money printing, guarantees and allowing banks to value assets at cost rather than market, as well as a panic lowering of interest rates from as high as 6% in the US to zero or negative. Bonds issued by eight major countries currently have negative interest rates from 1 & 2 year debt for Italy up to 15 & 30 year debt for Japan, Germany and Switzerland. 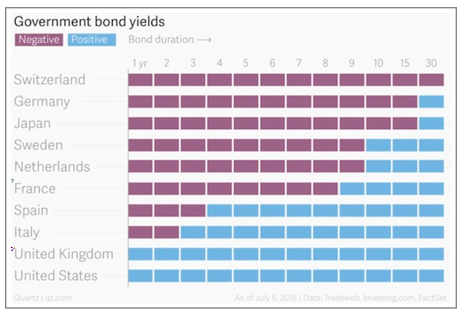 Whatever central banks and politicians say, nothing has been solved. On the contrary, risk has grown exponentially since 2006. Global debt has doubled to around $230 trillion since then. If global unfunded liabilities of $250 trillion and derivatives of $1.5 quadrillion are included, the world is now staring at total liabilities and risk of $2 quadrillion.

When the next crisis starts, which is likely to be in 2018, what central bankers have to focus on is not just global debt but also the derivative bubble. Banks will of course argue that the net derivative figure is much smaller. But in a crisis, gross will remain gross as counterparties fail to settle their obligations.

With this background, central bankers must be living on a different planet if they believe they can reduce their balance sheets. Debt in coming years, whether it is government or private debt will go up faster than any time in history.

Just take the US. It is no accident that Jerome Powell will take over from Yellen as Chairman of the Fed. He is a safe pair of hands and has been a Fed governor for 5 years. He is the perfect choice for expanding the Feds balance sheet infinitely.

US Federal debt is guaranteed to continue to double every 8 years as it has done since 1981. That means the US debt will go from $20 trillion when Trump took over to $40 trillion by the end of 2024. Even the Central Budget Office’s forecast is not far from that $40 trillion. But we must remember that this figure doesn’t include all the problems that the US and global economy will experience in the next few years.

And in Europe, Draghi has now made it clear that the Protection Deposit Scheme is no longer necessary. Thus the ECB will no longer guarantee customer deposits up to Euro 100,000. This should come as no surprise. When the crisis starts, no depositor will get real money back from any bank.

When the crisis that temporarily paused in 2009 resumes in earnest, there will be money printing on a scale that the world has never experienced before. That will be the time when the world will learn that “Quadrillion” as a word actually exists although no one can imagine the magnitude of that word.

To put it in perspective, $1 Quadrillion is 15 years’ global GDP. So if global debt goes to $1Q after central banks have tried to save the system, including most derivatives, we would have to spend the next 15 years using the total gross production of the world just to repay the debt. Thus it would mean 100% tax for 15 years.

But it doesn’t stop there. When debt defaults start on a bigger scale, central banks will lose control of the interest rates. The manipulation of rates defies all laws of nature and supply and demand. It is not possible to have maximum credit and minimum interest rates. In a free market, if demand for credit is high, the cost of credit will also be very high.

When the $230 trillion world debt starts to implode, central banks can no longer hold rates down as the bond markets panic. It will start with the longer rates going up and eventually higher long rates will pull the short rates up.

In the 1970s and early 1980s rates reached the high teens. This time they are likely to go higher as default and credit risk rise substantially. If interest rates rise to “only” 14.4% annually, debt will double every 5 years. This means that the $1Q debt will have grown to $2Q five years later.

HYPERINFLATION AND THEN DEFLATION

As money printing escalates hand in hand with defaults, the world will experience hyperinflation on a level that no one can imagine today. At that point debt will probably have grown to tens of quadrillions. Most people will of course say that it would be impossible for debt to grow to these levels. Anyone who has studied historical debt defaults, money printing and hyperinflation will realise that during these periods, debt grows to many times the original debt.

Money printing and hyperinflation become a vicious circle that feeds on itself. Powerless central bankers lose total control and just panic into the next level of money creation. In the end it all fails of course, since printed money can never create wealth. At that point, the hyperinflationary depression turns to a deflationary depression. All credit disappears into a black hole and so does a major part of the financial system. The assets backed by the printed money collapse in value by 90% or more.

So can we avoid hyperinflation. Yes, that is possible if central bankers are too slow to react as defaults start. We would then go straight to a deflationary collapse with a total failure of the financial system, and a very severe and long depression.

Thus, either we will see a total destruction of paper money in a hyperinflationary scenario or a collapse of the financial system in a deflationary implosion of assets and debts. The most likely in my view is that we will have both. First hyperinflation and then deflation. But even during the hyperinflationary period, debt and bubble assets will deflate as commodities, including food, hyperinflate.

GOLD AND SILVER – ONLY MONEY TO SURVIVE

In both scenarios, physical gold and silver will be the only real money that will function. In the hyperinflationary case, gold will go to levels that are unimaginable which could be $100s of trillions per ounce. The number of zeros will be unimportant. But vital is that gold will more than maintain its purchasing power. As the gold paper market collapses and the whole world wants to own gold, the price of gold in today’s money is likely to go up much more than 10-fold. We are likely to see a major bubble in the gold price and maybe it will go as much as 50 to100-fold during the crisis. That would mean a price of $65,000 to $120,000 in today’s money. That might sound like a totally unrealistic target, but we must remember that the catastrophic scenario the world will experience in the coming crisis is also totally unrealistic to fathom for most people today. 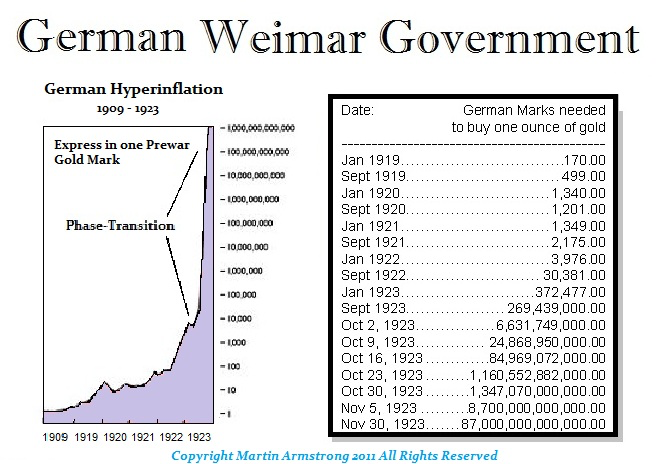 In a deflationary scenario gold will of course not go to those high levels. Firstly, gold will at least maintain its purchasing power. But since the financial system is unlikely to survive in a deflationary implosion, gold and probably silver will be the only real money available. Thus even in the deflationary case, gold is likely to go up substantially in real terms.

With the troubles the world is facing, gold is clearly not going to be the sole solution to the massive problems we will all experience. There will be a lot of poor people and a lot of hungry people. Owning some gold is at least likely to keep the wolf from the door. But the magnitude of the problems that the world will experience is likely to affect us all badly.

In the meantime, stock markets and cryptocurrencies are ignoring the risks in the world. We are not just looking at financial risk. Political risk is increasing in many areas. In Europe, Merkel has problems forming a government, the Irish government is about to collapse and the Brexit negotiations are a total farce. Theresa May and Britain are totally held to ransom by the unelected, unaccountable and totally irresponsible Brussels elite. They are more interested in maintaining their political power centre than doing what is best for the European people.

The situation in the Middle East is becoming more serious by the day. Will Crown Prince Mohammed bin Salem succeed with his coup. He will have created many enemies who are likely to cause him problems in the future. In addition, Saudi Arabia has problems all around it, including Yemen, Iran, and Syria. We could see major difficulties in the Middle East starting in 2018. No wonder Saudi Arabia are turning away from the weakening US and to China as partners. For the US, Saudi Arabia only has a Strategic value as long as the petrodollar rules. But as the life of the petrodollar is coming to an end in the next few years, the balance of power will change dramatically towards the petroyuan.

So aren’t cryptocurrencies the best alternative to fiat money, issued and controlled by governments. Well that is clearly what the issuers and investors in cryptos believe currently.

There is a real bonanza in the ICOs (Initial Coin Offerings) of cryptos. Currently there are 1,320 cryptos and they are increasing by the day. Many of them have no value but there are 726 worth $1 million or more. The biggest is Bitcoin which is around $11,000 at and valued at $180 billion. Ethereum has gone up 50% in the last ten days and is second at $46 billion. Ethereum was launched just two years ago.

Total value of cryptos are $300 billion up from $14 billion one year ago.

Cryptos is the biggest Ponzi scheme in modern history. It is very similar to chain letters or pyramid schemes. The issuers make tons of money as well as many of the speculators who get in early. In the end, the whole thing will collapse and late entrants will lose everything. Like all manias, cryptos can climb a lot higher but it is the kind of bubble which is created at the end of an economic era. Most of the participants believe that cryptos will replace fiat money and even gold.

In my view, there is little chance of that. I am not going to go in to that debate in detail now. Anyone interested will find unlimited articles on Bitcoin verses gold and similar on the internet.

Cryptos are no different to tulip bulbs. You cannot create real money out of thin air and then see it double every few weeks. The problems are numerous such as security, regulation, taxation, speed of transactions, false markets etc. Prices go up on very little volume. Also from what I understand, the crypto market will not withstand any selling pressure at all. A small volume of persistent selling will take the price to zero. Time will tell.

Like all manias, cryptos can go a lot higher. But when the music stops, the crypto market will go back to where it started which is zero.

The blockchain technology, which is not new, is likely to find numerous applications in many areas such as commerce, science etc.

TRADE OF THE CENTURY

Cryptos must not be confused with gold. They have virtually nothing in common. One is an electronic entry on a number of computers and the other is a scarce physical element and the only money which has survived for 5,000 years. It is extremely unlikely that Bitcoin will replace gold as money for the next 5,000 years or more.

I know of some gold investors that are tempted to buy cryptos instead of gold. Greed drives people to instruments that appreciate rapidly in value. The Nasdaq in 1998-9 is a good parallel. It kept on doubling until every amateur investor was sucked in. Then it went down by 80%. The difference with most cryptos is that they will decline by 100%.

For anyone who wants to preserve wealth, now is a good time to sell cryptos and buy gold. It could turn out to be the trade of the century. But even if it isn’t, there is no better form of insurance against the coming global problems than physical gold and silver.