History repeats itself with staggering similarity. The Crises of the 3rd Century and today have much in common. All empires have the seeds of their own destruction within them. So if we look back almost 2000 years to the Roman Empire we will find exactly the same symptoms as today. 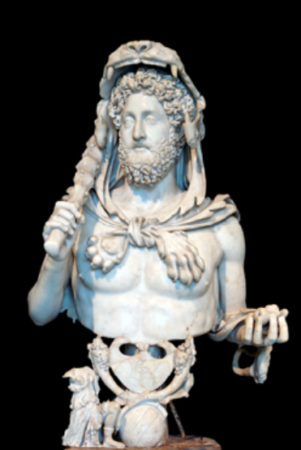 Deficits, debts, excessive military spending, debasement of currency, breakdown of trade, plague, revolts, wars, and hyperinflation. This is exactly what happened in the Crisis of the 3rd century and right now the world is facing the same disasters. When Marcus Aurelius’ son Commodus (picture) became Emperor in 180 AD, the silver content of the Denarius coin was almost 90%. But then gradually costs were soaring and revenues declining and the empire was running out of real money or gold and also silver. More and more money was required to bribe a disloyal army. By 235 the situation became serious as many Roman legions were defeated by the Germanic peoples. The Roman generals also fought each other for control of the Empire. Between 235 AD and 284, there were more than 50 emperors most of them murdered or killed in battle. The finances of Rome declined rapidly and debts increased substantially. Taxes were continuously raised but there were fewer and fewer who were in a position to pay tax. From 250 AD there was also a plague that killed major parts of the population.

PLEASE JOIN THE MAMinar (webinar) WITH RONNI STOEFERLE, GRANT WILLIAMS & MYSELF ON JUNE 8TH – See details at the end of the article

By changing the names and years to today in the above paragraph, the situation is almost identical. From the creation of the Fed in 1913, the US and the dollar have gradually gone downhill but the acceleration phase started in 1971 when Nixon closed the gold window.

Again the similarity with Rome is astonishing. The real decline started in 235 when the Crisis of the 3rd century began. At that time the Denarius had 50% silver content which over the next 50 years declined to 5%, a 90% fall. Emperor Gallienus presided over this final fall in the 260s AD.

THE DECLINE OF THE ROMAN EMPIRE & THE DENARIUS

The situation today is even worse. In the 50 years between 1971 and today, the dollar has lost 98% of its real value, measured in gold. The fall is now accelerating as the graph below shows. The dollar has lost a staggering 83% in the last 20 years since 2000. 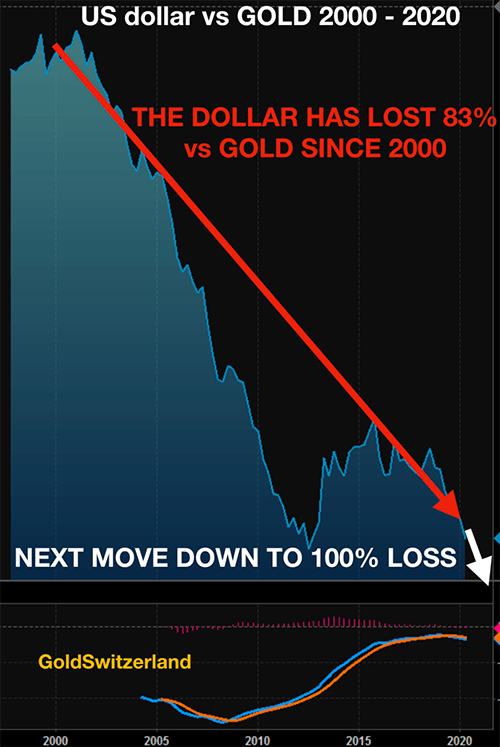 THE SYMPTOMS ARE THE SAME BUT THE DATES CHANGE

What is absolutely extraordinary is that the symptoms of the 3rd century are identical today: Deficits, debts, excessive military spending, debasement of currency, breakdown of trade, plague, revolts, wars, and hyperinflation.

Each one of the above symptoms is present today. We obviously have the debts, deficits, etc. We also have social unrest in many countries and right now rampant in the US. We  also have the plague in the form of Coronavirus. So far there are no major wars but sadly with the current geopolitical tensions, the risk is major.

We don’t have hyperinflation yet which is typically defined as prices going up by 50% per month. But with the dollar having lost 98% over 50 years and 83% since 2000, it only has 2% to go to ZERO. And with the massive money printing and credit expansion that is now taking place, I cannot understand how anyone believes we can avoid it today.

Human beings always think that it is different today just because we are here. But how can anyone think that we can solve a debt problem with more debt? And when we look back at history, currency collapse and hyperinflation is a very frequent event. Just in the last 100 years, there have been over 60 hyperinflationary events in the world. And in the last 2000 years, the number could easily be over 1,000. What is totally different today is that the whole world is in a similar situation and when hyperinflation starts, very few countries will be able to avoid it. A global hyperinflation will clearly be both spectacular and devastating.  It is not a question of IF only of WHEN.

But we are already seeing the first symptoms of hyperinflation with US Money Supply growing exponentially: 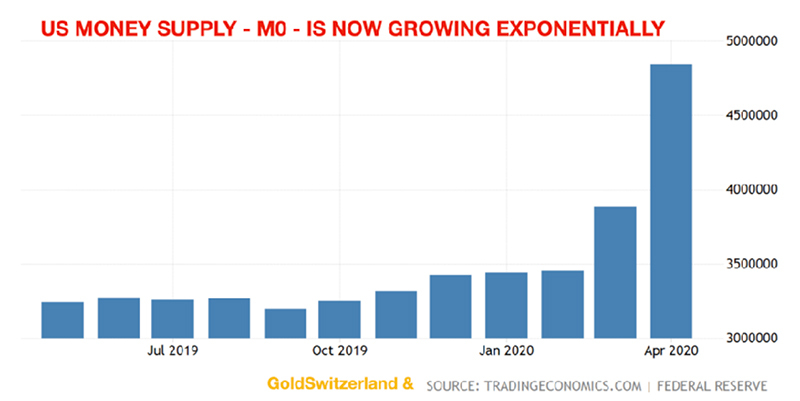 Hyperinflation happens very quickly, almost out of the blue. As the chart shows below. it can go exponential in a couple of years. 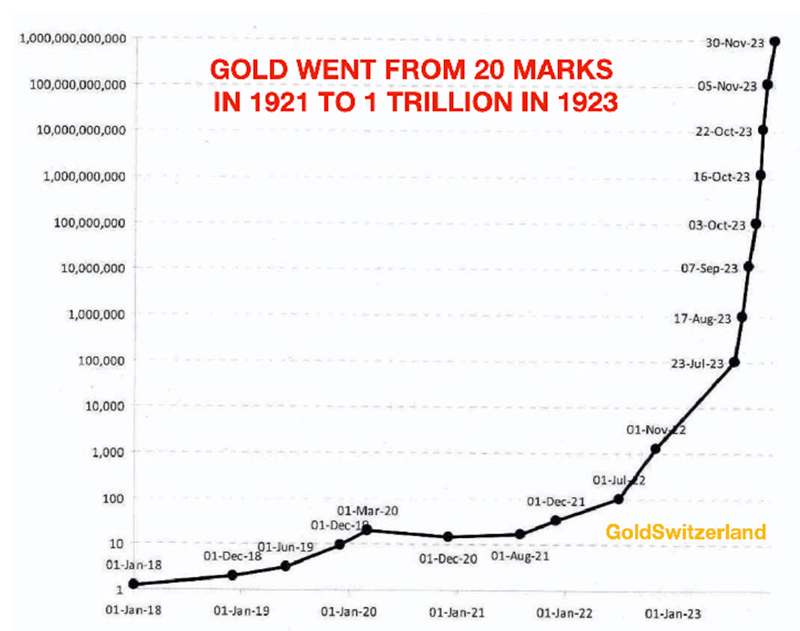 Debts and money printing have been driving stock markets to ever dizzier heights for decades. Economic fundamentals and reality have little importance. Just give investors another injection of fake money and they euphorically invest it in the market. It is a perfect  end to a fake world. You print worthless money and then buy shares that have a fake value hoping that the carousel will spin ever faster not realising that all the riders will soon fall off. And then the music stops and all goes dark.

But before the music stops, it is so loud that investors cannot hear all the warning signals.

And we certainly have had enough warnings. It all started in 2000 with tech stocks crashing 80%. That was also the time when stock markets peaked in real terms. But nobody noticed and most people still haven’t.

How can any investor with even an ounce of analytical ability not notice that since 1999 stocks are down almost 70% in real terms? Real terms obviously means gold since it is the only honest money and the only money that has survived in history. It is also the only money that over the millennia has maintained constant purchasing power. An ounce of gold 2000 years ago bought a good suit for a man and still does today.

It seems that for a great number of investors, stocks are the only investment they look at and believe they understand. But they don’t understand enough to realise that stocks in this century have been an extremely poor investment in real terms. What they can’t fathom either is that stocks are now entering a major secular bear market which will be devastating.

To measure stocks in a fiat currency like US dollars, does not reveal what actually happened to the investment. Since stocks seem to have gone up substantially in dollar terms this century, investors feel both rich and content. But in purchasing power terms they have been a losing investment as measuring stocks in gold reveals. 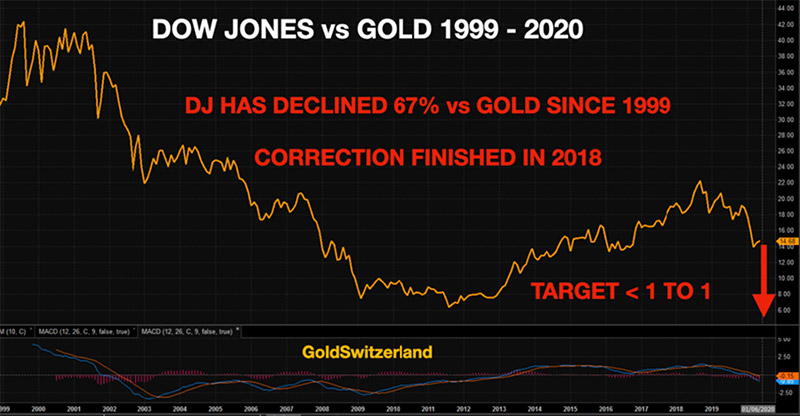 A SUCKERS’ RALLY – AN ESSENTIAL INGREDIENT

So the Dow versus gold is an important indicator. Another essential ingredient required to  end a bull market is a suckers’ rally. Before a market turns down properly, retail investors must be sucked in at the very end. These are the people who believe that the drop has finished and that the V-shaped recovery is happening. They will soon be disappointed as the market crashes to new lows.

The chart below shows that trading volume at Retail Brokers have quintupled this year. This is a typical signal that this bull market is coming to an end. 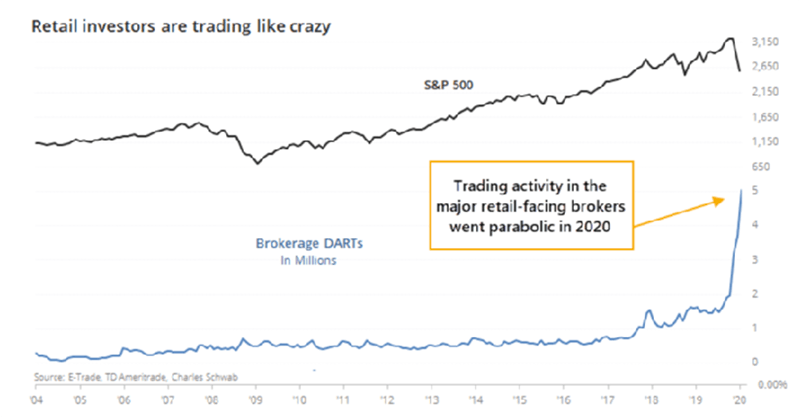 With the world economy collapsing, you wonder what planet stock market investors live on. Can’t they see what is happening? Just look at some of the problems in the world:

There are 100s of millions of unemployed or not working in the world today. This could rise to over 1.6 billion which is 50% of the global workforce according to the International Labour Organisation (ILO). It is estimated that as many as 40% of the people who have lost their jobs won’t get them back. GDP is collapsing – down 30-40% in Q2 in many countries. Retail trade, factory output, industrial production are crumbling. The airline, hotel, restaurant, and travel industries are hemorrhaging.  Over 100,000 businesses have shut down in the US with many small and big businesses becoming insolvent as cash flow dries up.

If we look at the Nasdaq 100. It has just made a new all-time monthly closing high. This is totally mind-boggling bearing in mind the problems outlined above.

The Relative Strength Index at the bottom of the chart has not confirmed the Nasdaq new highs since 2018. This is a very bearish signal which almost without exception leads to a crash.

Another bearish factor is divergences between different indices. The new high of the Nasdaq is not confirmed by the Dow or the S&P. That is also a strong warning signal.

My opinion on global stock markets hasn’t changed. All the major indices are in the final stages of a correction up of the downtrend which started in February. The next leg down will be to new lows and thereafter much lower levels over the next couple of years.

Since all the currencies are in a race to the bottom, it is always difficult to predict which one will win. And it doesn’t really matter since the destiny is the same for all of them. It serves no purpose to hold worthless paper money which will be printed to death. Much better to hold physical gold and some silver. Still, it looks like the dollar is turning down  now. The trend is not confirmed yet technically. But although I recommend to investors to not hold any major amount in any currency, I believe that the dollar is the most likely to fall first. This is based on the major economic and political problems the US is facing including a massive debt that is galloping higher. 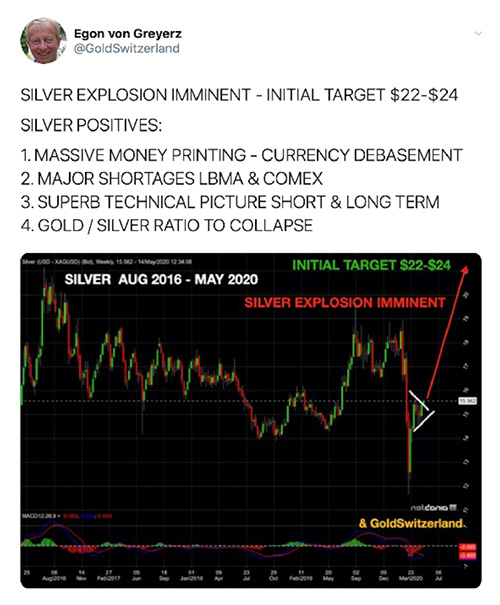 Silver is a leading indicator for the metals and this recent move is very significant. The important point I made in my Tweet was that the Gold/Silver ratio will collapse and this is exactly what happened. It went from 110.60 on the 14th to 98.80 on June the 2nd, a fall of 11%.

A falling gold/silver ratio is a prerequisite for rising precious metals. This means that we now have confirmation. 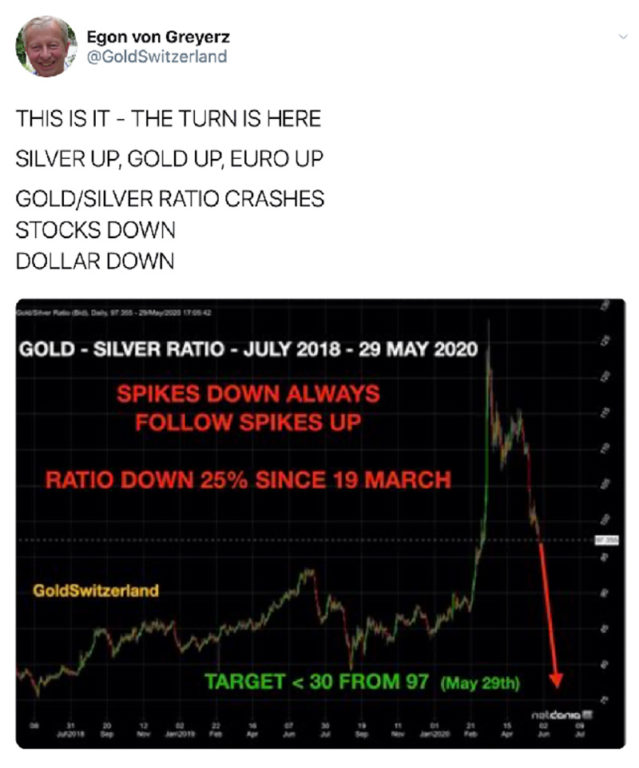 The ratio will continue to fall towards 30 initially as I said in my Tweet on the 29th. This means that silver will go to the old high of $50 and above. But it won’t be a straight move and there will be major volatility. This is why I always recommend to hold more physical gold than silver.

Gold will move more slowly than silver but the old high of $1,920 should not take too long to be reached before much higher levels.

But as I always point out, don’t focus on price moves in precious metals measured in worthless paper money. Instead, just hold physical gold and silver as protection against the coming collapse of the currency system.