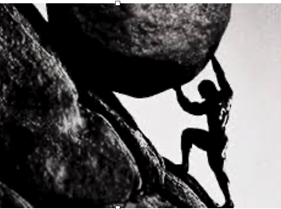 Understanding four critical but simple puzzle pieces is all investors will need to take the flood that leads to fortune.

Why then will the majority of investors still take the wrong current and lose their ventures?

Well because investors feel more comfortable staying with the trend than anticipating change.

Understanding these four puzzle pieces will not just avoid total wealth destruction but also create an opportunity of a lifetime.

The next 5-10 years will involve the biggest transfer of wealth in history. Since most investors will hang on to the bubble markets in stocks and bonds, their wealth will be decimated.

As Brutus said in Julius Caesar by Shakespeare:

“There is a tide in the affairs of men,
Which taken at the flood leads on to fortune.
Omitted, all the voyage of their life
Is bound in shallows and in miseries.
On such a full sea we are now afloat.
And we must take the current when it serves.
Or lose our ventures.”

So what are the four puzzle pieces that will lead to either fortune or misery.

Just put these 4 pieces together and the conundrum of the direction of markets and the future of the world economy will be very clear.

But sadly most investors will find it difficult to join up the 4 pieces.

Have governments and central banks conditioned investors to eternal happiness by their profligate policies?

Yes, they most probably have. But happiness in this case is ephemeral and will end in “miseries”.

Central banks are now caught in Sisyphean task of printing money to eternity.

And this is also the punishment that the Fed has received. As I pointed out in my article about the Swiss 16th century doctor Paracelsus, everything is poison, it is only a question of the dose. The US has for decades received a toxic overdose of “free” money and once hooked the only remedy is to continue to inject the poisoned patient (the US economy) with more of the same.

On the one hand, the Fed can never voluntarily stop the printing as this would lead to instant collapse of stock markets, bond markets and the financial system.

But on the other hand, the incessant printing also has consequences.

Destroying the bond market means substantially higher interest rates which is something that neither the US nor the world can afford with $280 trillion of debt and rising fast.

So there we have it. The US and the world have both their hands tied and whatever they do will have dire consequences for the world.

So let’s come back to the 4 puzzle pieces which investors should have imprinted in their brain.

Since Nixon closed the gold window 50 years ago, the world has experienced unprecedented credit growth and money printing.

Gold backing of the currencies kept the central banks on a short leash, but since 1971 there has been a free for all monetary bonanza in the US and most of the world.

Since 2006 the money creation has gone exponential.

The pure definition of inflation is growth in money supply. But until recently, only asset classes such as stocks, bonds and property have seen major inflation. Normal consumer prices have officially only increased by marginal percentages even though most of us are experiencing much higher inflation than the official figures.

But now commodity prices are warning us that inflation is here with a vengeance.

For example, agricultural product inflation is up 50% since last May. This hasn’t yet reached consumer prices in a major way but it soon will.

If we look at commodity prices in general, they are up 100% since the April 2020 bottom.

And looking at commodity prices to stocks, we can see in the chart below that commodities are at a 50 year low with a massive upward potential which is an advance warning of a major inflationary period lurking. 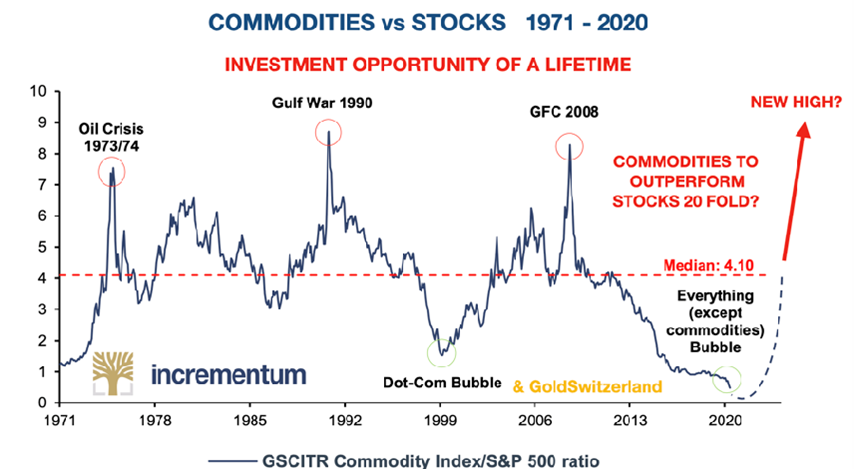 Most commodities will go up dramatically in price, including food and energy.

GOLD – THE KING OF METALS

Investors who have been reading my articles will know that the best investment for benefiting from inflation and simultaneously preserving wealth are precious metals stocks as well as physical gold, silver and platinum.

Gold is the king of the precious metals and since it broke the Maginot Line at $1,350, it is now on its way to levels few can imagine. Any correction, like the current one should be taken as an opportunity to add more gold. 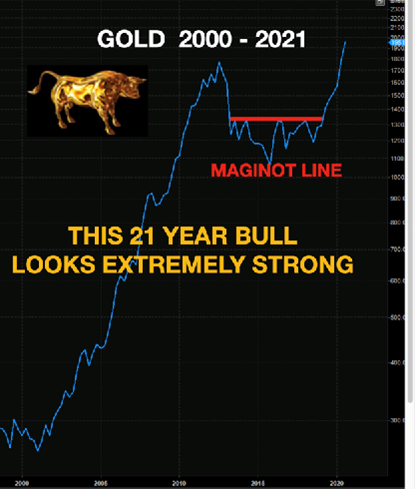 This means that the price of gold has far from reflected the massive creation of money in the last few decades. So that is still to come. 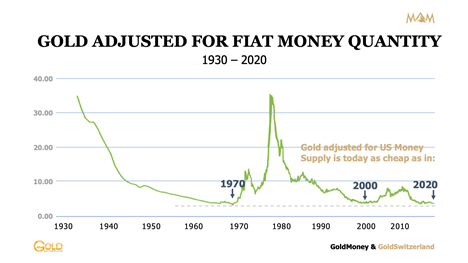 The accelerating deficits and debts in the US will continue to put downward pressure on the dollar. 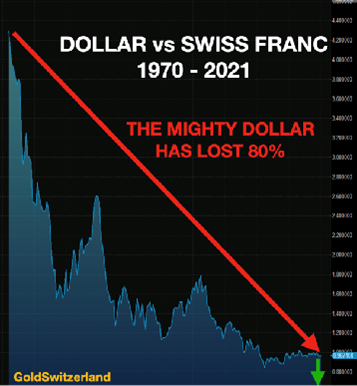 Admittedly, the Swiss franc has been the strongest currency for over 50 years. But even if we look at the troubled EU, it has recently broken out against the dollar and looks very bullish. 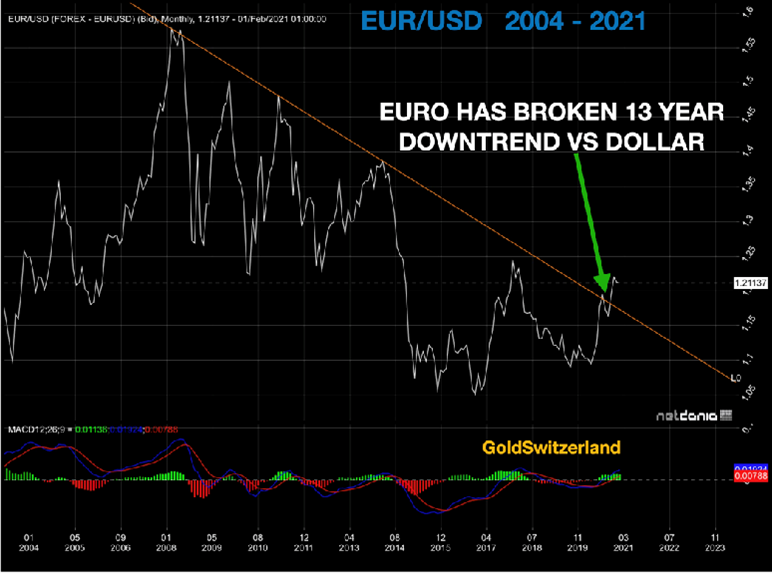 But we must remember that all the currencies are in a race to the bottom and there is no prize for being first.

Just look at the gold against the dollar which has lost 85% since 2000. 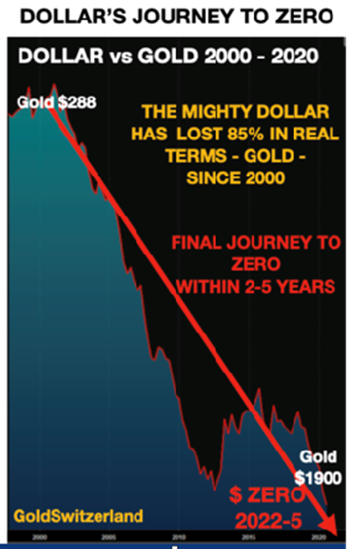 As I have pointed out many times, all currencies have lost 97-99% in real terms, against gold, and in the next few years, they will lose the remaining 1-3%.

We need to understand that those final few percent fall means a 100% fall from today. And the demise of the current currency system as von Mises predicted.

CURRENCIES DEMISE ARE DETERMINED THE DAY THEY ARE BORN 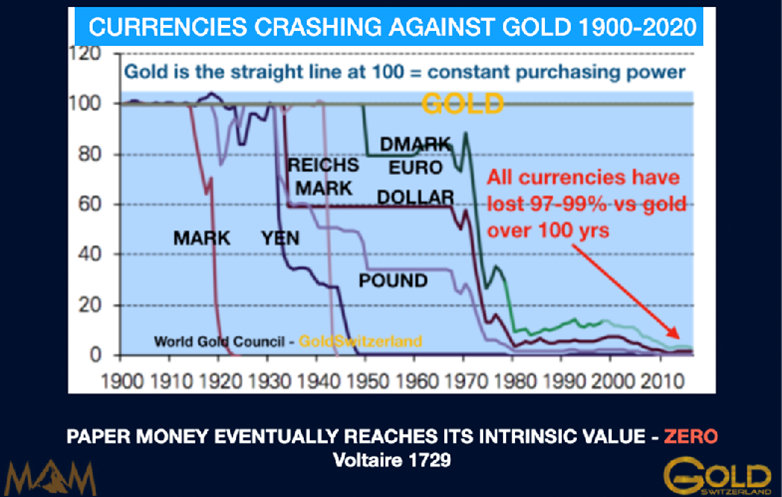 The very nature of fiat currencies means that their demise is determined the day they are born. Since governments throughout history have destroyed every single currency, it is ludicrous to measure your wealth in a unit that is destined to become worthless.

Remember that gold is the only money which has survived for 5,000 years.

Interest rates worldwide are at historical lows. In Switzerland for example, you can get a 15 year mortgage at 1.1%.

It clearly sounds like the bargain of a lifetime. You can buy a house for 1 million Swiss franc and just pay 11,000 francs in interest. If you rented the same house, the annual rent would be 3x the interest. So there is a clear disconnect which is not sustainable.

The emerging inflation will push interest rates up and we have already seen the 10 year US treasury rise from 0.39% in March 2020 to 1.34% today. Technical and cycle indicators confirm that the monthly closing bottom in July 2020 could have been the secular bottom.

If that is correct, we have seen the end of the bear market in rates and bull market in treasuries since the Volker high at 16% in September 1981.

There is nothing natural in this 40 year suppression of interest rates.

Then Greenspan entered the scene with a Fedspeak that nobody understood but both politicians and Wall Street actors loved his actions that spoke much clearer than his words. During his 13 year tenure, the 10 year halved from 9% to 4.5% in 2006.

Every subsequent Chair after Greenspan only had one policy, accommodate more by endless printing and lower interest rates. 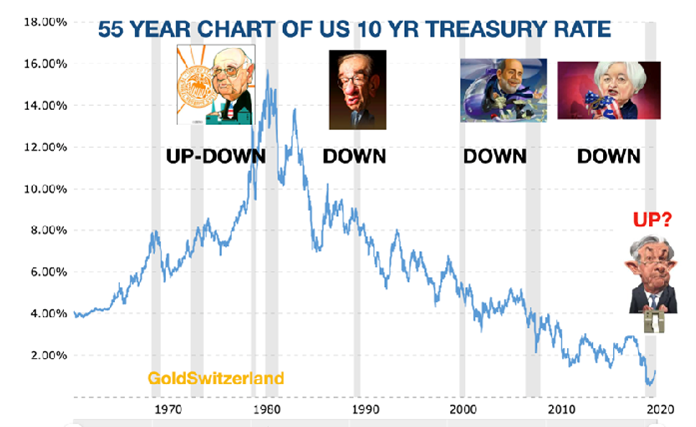 PRINT UNTIL YOU ARE SKINT

This would be the beauty of a free and unregulated credit market. Supply and demand for credit affects the cost of money and acts as a built in regulator.

But Keynesian policies and MMT (Modern Monetary Theory) have done away with sound money.

UMT (Unsound Monetary Theory) would be a more appropriate name for the current policies.

Another suitable name would be Print Until You Are Skint!

The current policy of low rates has two purposes.

The first is to keep stock rising. Because high stocks gives the illusion of a strong economy and strong leadership. Thus it is the perfect tool to buy votes.

Secondly, with a US debt of $28 trillion, free money is a matter of survival for the US. Imagine if rates were determined by supply and demand.

Every president in this century setting a new record. Bush almost doubled US debt from $5.7 trillion to $10t over 8 years. Obama doubled it again from $10 to $ 20t and Trump set a new 4 year record with a $8 trillion increase.

With debt going up exponentially, an appropriate market interest rate would be nearer 10% than the current short term rate of 0%.

A 10% cost of the US debt of $28t would mean $2.8t which would virtually double the already disastrous US budget deficit.

So a colossal task here for the Fed to suppress rates against the natural market forces.
In my view they will fail in the end – with dire consequences.

It looks like Powell is going to be the first Chair of the Fed since Volker who will actually preside over rising rates although he will fight against it.

The interest rate cycle has most probably bottomed. This will be a major shock to the market which forecasts low rates for years. Initially inflation will drive rates up. Thereafter a falling dollar will lead to yet higher rates. The panic phase will come as the dollar collapses, and debt markets default. That will lead to hyperinflation.

Warren Buffett started in the investment business in 1956. The Dow was then 500 and has since gone up 63X. Since he started, Buffett has achieved an average annual return of 29.5% year on year.

Clearly a remarkable record achieved over a 75 year period. It is very likely that Buffett and all stock market investors will see stocks not just fall but crash.

STOCKS TO ENTER AN AIR POCKET

With an 88% overvaluation the Dow can enter a very big air pocket at any time.

The Dow/Gold ratio is a very important measure of relative value between real money and stocks. This ratio peaked in 1999 and fell 89% to 2011. Since then we have seen a correction which finished in 2018. The next move in the ratio will reach 1 to 1 as in 1980 when the Dow was 850 and gold $850. Lower levels are likely thereafter. 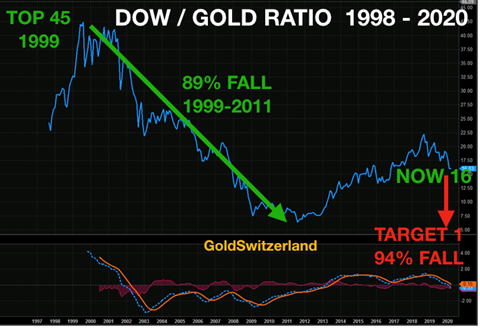 A 1 to 1 ratio in the Dow/Gold ratio would mean that the Dow will lose 94% from today against gold. That is a very realistic target. Remember that the Dow fell 90% on its own in 1929-32 and that it took 25 years to recover to the 1929 level. And on all accounts, the situation today is much more severe than in 1929.

The secular bull market in stocks is very likely to finish in 2021. This turn could be at any time. Just like in 2000, it will all happen very quickly and this time it will be the start of a very long and vicious secular bear market.

Real assets like gold, silver and platinum will be investors’ life insurance.

To hang on to stocks and bonds will totally destroy your wealth and your health.