Regardless of one’s views as to the most realistic means of balancing human risk with economic risk, all would agree that COVID has both revealed and accelerated critical (and pre-existing) fissures in the financial landscape.

The hitherto sacred tenants of free-market price discovery, fair-play capitalism and faith in elite policy guidance have each seen a dramatic fall from grace.

Nowhere is this fall (and its staggering implications) more obvious than within: 1) the undeniable demise of U.S. small businesses and 2) the Frankenstein-like profile of a walking-dead bond market.

Small Businesses in America—Endangered to the Point of Extinction

Small businesses, from sea to shining sea in the States, are dying.

This is not fable, but fact, one easily demonstrated via objective data rather than theoretical bromides.

If one were to envision a room full of 12 jockeys selected to compete in the next Kentucky Derby, the air would be thick with an excited sense of pending competition.

However, if 9 of those jockeys were required to saddle donkeys and the remaining 3 were handed the reins to doped thoroughbreds, it would not take much equestrian expertise to foresee the winning trifecta…

As comical as such a rigged race might seem, the current setting of fair-play capitalism and the decline of American small businesses is closer than you might think to such a tragi-comedy.

Survival of the Biggest

In its purest form, capitalism requires a fair playing field (or race track), not a rigged platform in which the thoroughbreds are accommodated and the donkey-riders are denied hay.

Current market competition in the U.S., both pre and post COVID outbreak, has been regulated and administered (i.e. corrupted) into a system wherein survival and victory hinge less upon defined advantages and more upon engineered rules and one-sided policy measures.

For decades, governments, treasury departments, central banks and regulatory bodies have created barriers to entry, lop-sided tax schemes, capital controls and other subtle yet egregious paradigms in which a minority group is favored/protected while the majority group is left without a saddle.

Enter COVID and the Lopsided Race to the Bottom and Top

The policy response to the COVID crisis has only heightened and accelerated this distortion of fair competition.

This imbalance is neither random nor related to the talent of the players. Instead, much of it boils down to size, not skill; and policy advantage not fair play.

Of course, policy makers initially (or superficially) sought to help the little guys in the form of PPP loans (8 weeks of salary and defined fixed expenses) and other targeted relief from the CARES Act.

Even more troublesome, is the quantifiable fact that the biggest beneficiaries of these initial relief measures were the big boys, not the little guys.

As the graph below makes objectively clear, almost all of the relief money went to a small minority of the biggest players. 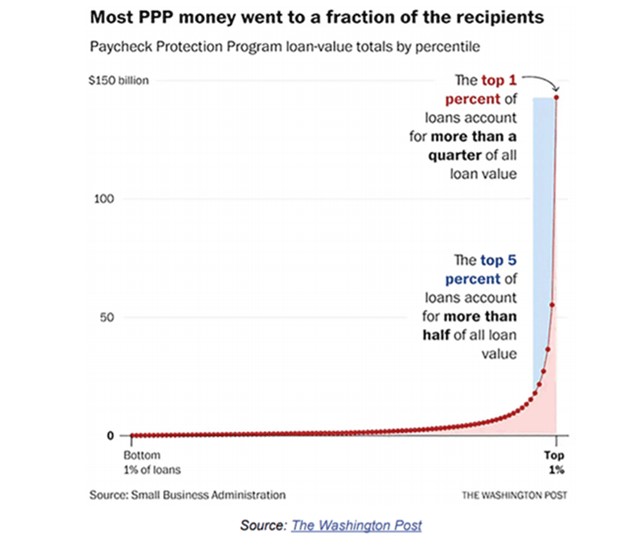 But it gets worse.

More Proof of a Rigged Track

In the wake of helter-skelter, make-it-up-as-they-go COVID policy confusions, the forced shutting down of small businesses has failed to balance human risk with business risk.

Instead, the pandemic policies merely added (and will continue to add) more risk to both.

Despite the best (or worst?) of intentions, the result has been a quantifiable disaster for U.S. small businesses, many of which are either collapsing on the track, or limping toward an ambulance, with potentially 50% about to shut their doors for good. 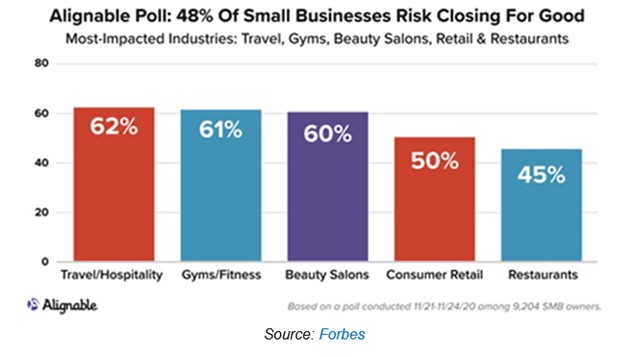 Small businesses are being carried off the field on their shields, while the big-boy, thoroughbreds are now poised, as Austan Goolsbee recently noted, “to swallow the world.”

The pandemic, alas, has exacerbated a clear split in the U.S. economy.

The big, large-cap names are seeing massive growth as small businesses, once the backbone of competitive capitalism, are disappearing at record pace.

This may explain, in part, an appalling (highly concentrated) stock rally in the midst of a global recession and pandemic, which has greatly favored the big boys in tech.

ETF’s—Magical Oats for the Thoroughbreds

But the tech sector is not the only beneficiary of this rigged game.

Almost all large-cap and publicly traded companies share a hidden advantage, as they are all (fast or slow, weak or strong) bundled together into ETF’s passively bought (and hence inflated) by pension funds, IRA accounts, defined benefit plan managers etc.

In short, index ETF’s (and the companies that comprise them) are passively riding a common investment wave of automatic and institutional investment, regardless of the poor surfing skills (i.e. balance sheets) of the vast majority of the companies within them.

As inflated, Fed/liquidity-supported stock markets and ETF’s rise un-naturally, their share price (rather than profit) inflation allows them to swallow up (or price out) most smaller businesses—again, like thoroughbreds racing donkeys.

Big companies, even bad ones with lots of debt (see below), are still flush with liquidity (i.e. cash) compliments of a market-accommodating Fed, whose policies literally mimic the legal definition of counterfeit and fraud.

Meanwhile, the ignored mass of small businesses can’t make their lease payments, let alone a profit, in a lockdown year.

As the pandemic unfolded in 2020, the big boys on the public exchanges were already sitting upon years of post-08 stimulus and cash in a fixed race that was lopsided well before the COVID handouts kicked in.

Specifically, flows of funds from the Fed to these big-boy balance sheets stood at $4 trillion in cash in Q1, well before the Corona Virus was making its first headlines.

In short, while donkeys were dying of thirst, the thoroughbreds were literally swimming in liquidity.

In addition to direct Fed support, the large-cap big-boys on the S&P, DOW and elsewhere were the primary beneficiaries of the 2017 Tax Cut, as well as, of course, the all-too generous and aforementioned CARES Act of 2020, which primarily benefited large, exchange-traded names to the tune of $5 trillion in favored loans.

Such massive resources have left larger businesses at an openly unfair advantage over smaller ones.

It’s just a simple matter of open (yet largely ignored) math and policy.

The convergence of such unfair advantages has given a particular tailwind to digital tech and communication companies as well as big pharma, consumer credit, fast-food juggernauts and discount retail names, all of whom had already been enjoying unlimited liquidity (literal “monopoly money”) and hence market support from the Fed.

Today, these same big boys are gaining increasing pricing power and hence monopoly-like powers in rents, acquisitions, innovation, and cost of (as well as access to) capital that ought to make an anti-trust lawyer blush.

Unfortunately, these lawyers aren’t too busy when it comes to helping small businesses thrive.

Federal spending on anti-trust enforcement at the Dept. of Justice and FTC has fallen dramatically as big business has been rising even more so.

The unfair competition accorded to large cap enterprises gets even worse when one just considers the equally appalling rise in the number of big-boy zombie companies masquerading as viable businesses in this twisted new backdrop of broken capitalism.

Zombie companies are those with infinitely more debt than available cash, yet due to their size, enjoy unfair access to low-rate debt/capital and stay “alive” only by borrowing today to pay yesterday’s interest, and then borrowing tomorrow to pay today’s debt interest.

Of course, the principal on the debt is not (and never will be) repaid.

Instead, “accommodating” banks engage in a rigged re-fi game of loan extend-and-pretend programs not available to small businesses, whose size makes them “riskier credits” than the too-big-to-fail large-cap zombies, who are the highest of all risk credits.

Again, the ironies (and unfairness) abound.

Thirty years ago, zombie companies were non-existent, yet based upon pre-COVID data from the BIS and OECD in 2018, more than 12% of all listed firms in the world were classified as zombies.

Today, that percentage is well above 15%

Such companies are effectively allowed to survive upon unlimited access to debt and cash, while smaller businesses die without a banker in site.

This is particularly shameful, as zombie companies quantifiably suck rather than stimulate the economic growth out of their host economies, whereas thriving small businesses were once the very backbone of the fair and thriving economy that put the U.S. ahead.

A large number of those zombie companies are hiding in a broken credit ETF near you.

But unique and unfair access to cheap debt and unlimited liquidity doesn’t just distort the natural lifespans of zombie companies.

Wall Street regulators and banks allow other large (and largely profitless) enterprises to issue bonds (that will never be repaid) which small businesses simply can’t do, and thus simply can’t compete. 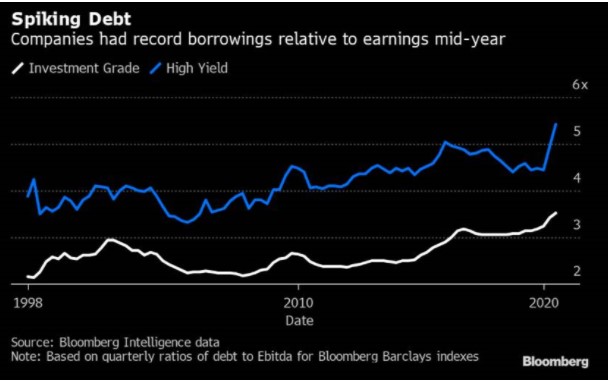 Sadly, the vast majority of even these debt-backed thoroughbreds are themselves just lame horses.

Greater than 60% of all corporate bond issuers in the U.S. are rated as junk, high-yield or levered loans—i.e. the very bottom of the credit risk barrel. 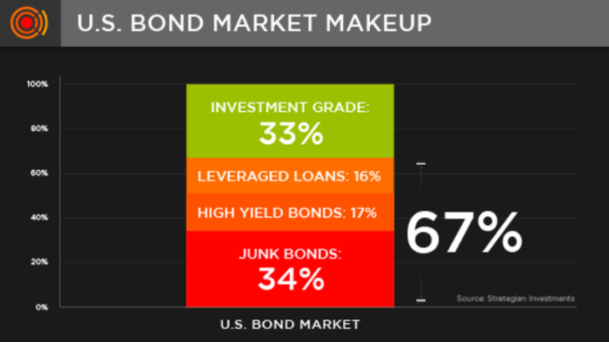 Debt experts who track these and other debt-ravaged enterprises are forecasting a wave of corporate defaults once COVID relief measures (and big-boy thoroughbreds) run out of breath in a current bond bubble where corporate debt to GDP has spiked to an all-time high of 57%.

The Dominos Fall Towards Physical Gold

As the cost of debt spikes, those debt-ravaged big-boys on the big exchanges dip into earnings to cover interest expenses. But those earnings are falling. 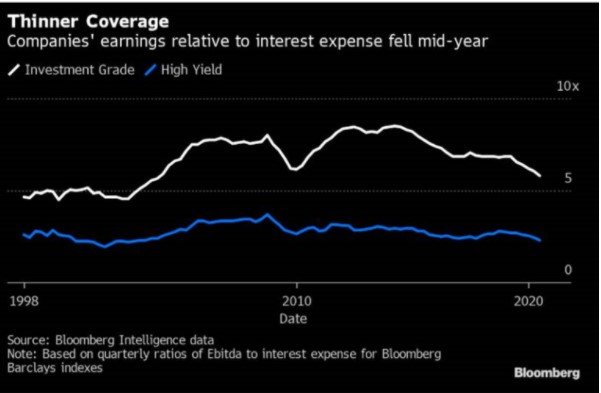 In turn, stock prices and markets tank and hence the Fed steps in to print more money to dampen the fall, as always.

Looking forward, we can thus expect an outpouring of increased money creation and futile liquidity measures to save drowning enterprises that are already technically lifeless.

Such hyper-liquidity/money creation by definition means inflation, which in turn means the further debasement of the dollar and other major currencies.

This, in turn, means those looking to preserve their wealth will be looking to real money which stands the test of time, can’t be replicated, hacked, duplicated or distorted.

In short, and in sum, all roads lead back to physical gold.