This is why governments cannot live with gold as money for more than short periods. Because over time governments always spend more than the country earns. At that point their survival can only be assured by buying votes. And printing money is a very cheap way of buying votes. It costs nothing when you own the printing presses (or computers) and it is very effective short term. The problem is when that little boy shouts out: “The emperor has no clothes”. At that point everybody will realise that we all live in a world based on lies and debt.

In the next few years, country after country will find a naked emperor and empty coffers. The irresponsibility and incompetence of regimes know no borders. Take a country like Venezuela which hit the jackpot by sitting on free oil reserves of massive quantities. Venezuela has the biggest oil reserves in the world. But in spite of that, Venezuela has today reached economic misery.

This is what Charles Dickens wrote in David Copperfield:

SOCIALISM ONLY WORKS WITH OTHER PEOPLE’S MONEY

But that simple rule for happiness seems impossible to follow for any nation today. Almost every country in the world is on the side of misery with the deficit being made up by debt or printed money. Margaret Thatcher said it better than anyone: “The problem with socialism is that you eventually run out of other people’s money.” And that is exactly what the world is doing. By borrowing more and printing more, socialism is not creeping but flooding into most Western countries as well as the rest of the world.

The table below shows total government spending as a percentage of GDP. In ten countries the government spends 50% or more of total GDP. These include all the Nordic countries with Finland the worst at almost 60%, as well as France, Greece, Belgium, Italy, Austria and Hungary. The US is just under 40% but is likely to increase substantially in the next few years as the economy falters and the government opens up the money spigots. When a government spends 40%-60% of total GDP, this is not just socialism. No, it is a total waste of a country’s resources. It means stealing 40% to 60% of what the people produces and then wasting it on bureaucracy and irresponsible spending. One hundred years ago, there were minimal or no income taxes in most Western countries and today the government burdens the people with 50% or more in many countries. 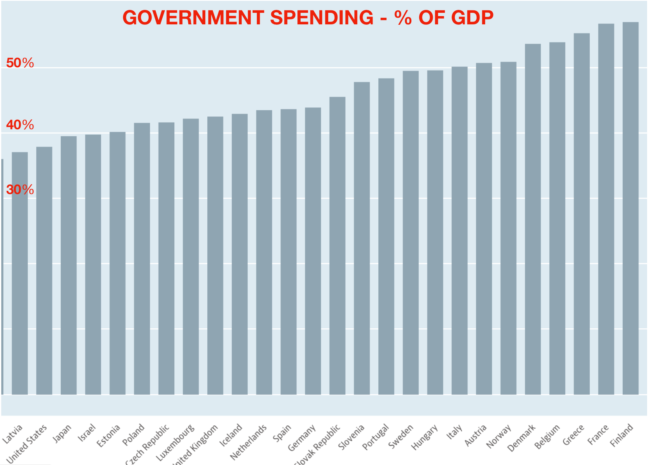 Venezuela is an excellent example of a prosperous country, with natural resources (oil), that is severely mismanaged and eventually turns socialistic leading to a total collapse of the economy. In 1935, Venezuela had the highest per capita GDP in South America. After a number of economic crises and corruption in the 1980s and 1990s, Hugo Chavez was elected president in 1999 and remained in that position until his death in 2013 when Maduro took over. Gradually the country’s economy deteriorated. In spite of its massive oil reserves, corruption, mismanagement, inflation, collapsing currency, big debts and socialism drove Venezuela to ruin. There are exchange controls, major shortages of most food products and even shortages of fuel. And Caracas has the highest murder rate of any capital in the world.

In 2016, the average Venezuelan lost 8.5 kilos in weight due to lack of food. If this had happened in the US or in some European countries, there would have been major health benefits. But the poor Venezuelans were not overweight to start with so this clearly affects the population and especially young children.

Venezuela had 367 tonnes of gold in 2015 and now allegedly still holds 187 tonnes. Sadly, this is not enough to save the country. And the people have not held any gold either. Most people in Venezuela have not had enough money to buy gold for in later years. But if they had just put a fraction of their income into gold, that could have saved them. 13 million Venezuelans are today on minimum wage which is $7 per month. With hyperinflation, that dollar amount collapses fast. Just imagine if 20 years ago some Venezuelans could have saved enough over to buy just one ounce of gold at $300. That ounce of gold would today be enough for 5 years’ minimum salary. But very few, if any did it. This is why I am telling people today who don’t have a lot of money to put aside just a small amount every month and buy gold. One gram of gold is $43. Most people in the West can afford to put that aside. And if you do that for 32 months, you have one ounce of gold. Remember that in Venezuela today, as I mention above, one ounce of gold goes a long way.

HISTORY TELLS US THE FUTURE

To determine the state of a country, you don’t need to look at balance of payments, budget deficits, debts etc. All that is needed is to look at the value of gold in the currency of the country. I have shown the graph below a few times but it is worth showing again and again because this graph is the key to what will happen in the next few years. And if we don’t understand history, we will not understand the present or the future. The chart shows that over a 100 year period, all major currencies have declined 97%-99% against gold. 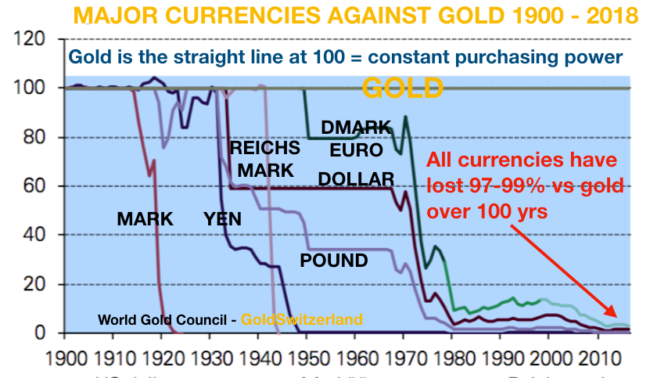 This tells us firstly that governments in the US, UK, Germany, Japan and many others have destroyed the value of their currencies by debt creation and money printing to the extent that the currencies are only worth 1% to 3% of what they were worth 100 years ago. This is a catastrophic mismanagement of scandalous proportions. These governments were given a mandate to manage the economy but not to destroy it. By hiding the truth and not showing the real picture in gold, they think they have got away with it. But gold reveals the truth as the chart above shows.

Secondly and more importantly, as it relates to the future, the chart also tells us that it is guaranteed that these currencies and many more will go the final 1-3% to the bottom. There is absolutely nothing that can stop the currencies in their final fall to ZERO. You will hear all bankers, economists and Nobel Prize winners saying that this is impossible and that we can’t have a total collapse of the economy or the currency. But you don’t need to understand anything about economics to forecast what is going to happen next. If you ask a young child looking at the chart what is going to happen next, he/she will tell you that it will go to the bottom. So the next leg of the race to the bottom is now on and is starting very soon.

300 MILLION FOR AN OUNCE OF GOLD

To understand what really happens when hyperinflation sets in, which it is virtually guaranteed for most of the world, just look at gold in Venezuelan Bolivars.

The second chart shows what happens to the gold price when hyperinflation sets in properly – the price explodes. Today, the official price for one ounce of gold is VEF 38 million. But that is not the real price because the black market price of the Bolivar is 8x greater than the official price. Thus the real price for one ounce of gold is 300 million Bolivars. This means that gold has gone up an astounding 150 million percent since 2000. VEF300 million for an ounce of gold might sound a lot but remember that during the Weimar Republic the price went to 100 trillion mark.

No one must believe what has happened in Venezuela can’t happen here. That is an extremely arrogant and dangerous stance to take. All we need to do is to look at the debt explosion in the world in the last 100 years and in particular since 1971. Global debt growth is now out of control, having doubled in the last 11 years. The debt plus derivatives and unfunded liabilities come to $2 quadrillion. This absolutely guarantees that the currencies will finish the move to ZERO and that gold will go up exponentially. For the ones who believe that this is scaremongering I ask: “Is there any doubt in your mind about the precarious state of the world economy. And if there is, would it not be right to own some physical gold as insurance against this risk.”

Anyone who argues against holding this insurance is a very, very brave person.