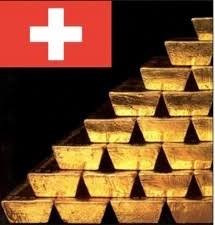 Don’t let your bank store your gold. They might not find it. A gold investor told us recently that his Swiss bank had moved the client’s gold from the bank’s safe to a private vault in the name of the bank, in Zurich. The client was aware of this move. But then the problems started. The gold was allocated and the client had the bar numbers. The client wanted to store the gold through our company and instructed the bank. But the gold wasn’t there any more. The gold was supposed to be segregated but the bank had stored it in the collective vault. And the client’s allocated, numbered bars were not to be found anywhere.

Presumably, the bank will accept liability and buy new bars for the client. But again this proves that it is not safe to keep your gold in a bank. We have regularly experienced similar problems with many different Swiss Banks, big or small.

WHEN BANKS COME UNDER PRESSURE, THEY WILL BORROW CLIENT GOLD

So again, I warn gold investors, not to hold physical gold in a bank vault or in a bank safe deposit box. When the next financial crisis starts, you will not get your gold back from the bank’s vault and you will not get access to your safe deposit box. The bank will obviously tell you that the gold in the box is yours, but I wouldn’t trust them. Also, the bank doors could be closed for a very long time. So even if you did eventually get access, that might take years.

Much better to store gold privately in secure vaults which you have physical access to at any time.

PAY GOVERNMENTS TO TAKE YOUR MONEY

Total government bond market is around $50 trillion. Out of that, $13 trillion carries negative interest. To me it is totally incomprehensible that anyone can lend bankrupt governments money.

Firstly, since most currencies have lost 97-99% of their value in real terms after the Fed was created in 1913, you are guaranteed to get back less real money than you invested if you hold a sovereign bond for more than a few months.

Secondly, no government will be in a position to pay back their debt in coming years. And soon they will reach a point when they can’t even pay the interest.

How can then investors lend governments $13 trillion of money and pay for the privilege of the state holding your money. That is totally absurd. You give money to an insolvent country and you must pay them for that great honour.

PUT YOUR MONEY INTO PORTUGAL OR GOLD?

Take little Portugal as an example. They have a massive debt to GDP of 125% and they also have negative yields from 2-5 years. What would you do? Would you lend money to a country that will never repay it and also pay them for the pleasure or buy gold?

Gold is the only money that has survived for 5,000 years and also the only money that has maintained its purchasing power. It is also no one else’s liability and totally unencumbered. In addition, it is totally liquid and can be used for barter. I doubt that anyone would accept a Portuguese bond as payment in say 2025 when it will be totally worthless. But I am totally convinced that everybody will accept a gold coin or gold bar. 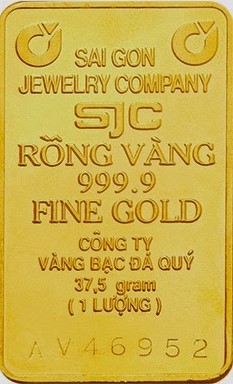 Many people in the Far East prefer to hold gold or foreign currency to cash. The Bangkok Post reported recently about using gold for house purchases in Vietnam. A shopkeeper in Hanoi bought a new $138,000 condo with half gold, half cash. He said: “We did it because we and the seller didn’t want to do a bank transfer. We are so used to buying things with gold and cash.”

The newspaper stated that Vietnam is one of the world’s fastest growing economies, yet “it is still in the dark ages when it comes to joining the global trend toward cashless transactions.”

The shopkeeper confirms the wisdom of the East that we often talk about. The people in India, China, Vietnam, Thailand and many more Eastern countries all put a major part of their savings in gold since they know that this is by far the best way to preserve wealth. Had the people in Zimbabwe, Argentina or Venezuela done this, it would have saved them from poverty and misery.

As asset prices collapse and gold appreciates, you will be able to buy a house for a fraction of the cost today, especially if you have your savings in gold, just like the Vietnamese shopkeeper.

Let us look at the coming collapse of the price of a new house in the USA. Today the median price for a new house is $335,000. In 1963 it was $17,000 – a 20x increase. As asset bubbles implode, a return to the 1985 level at least seems likely. That would mean a 75% fall in house prices. As credit dries up and interest rates surge, I would expect that this will be the minimum fall.

At the same time, let’s assume a very likely increase in the gold price to $5,000 in today’s money. In my view this is the very minimum and $10,000 or much higher is more likely.

As the next global financial crisis unravels in the coming few years, we will see massive money printing, total debasement of most currencies and hyperinflation. The only way to protect yourself from the total destruction of paper assets is to hold physical gold and some silver.

There are three kinds of money, Worthless, Soon Worthless and Eternal. Since all fiat money has always gone to ZERO throughout history, the same will be the case for the dollar and all other currencies in coming years. 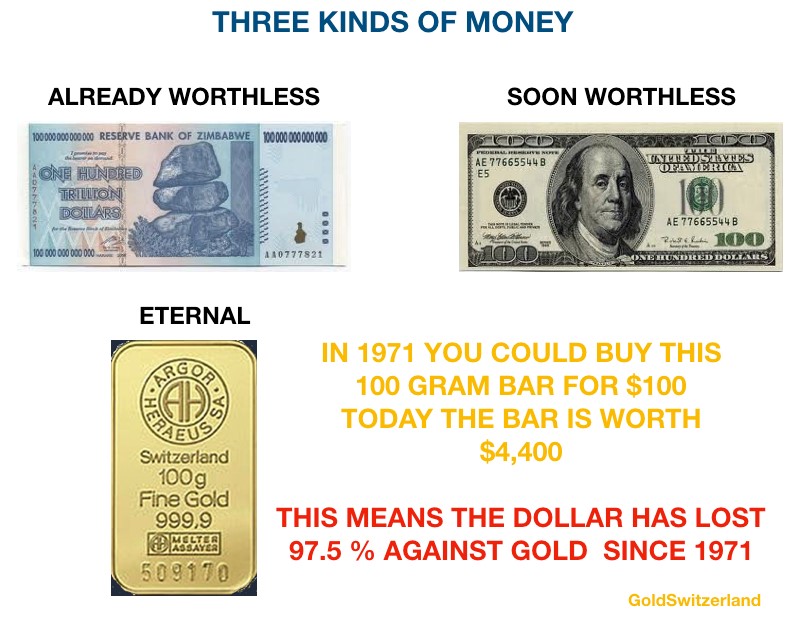 So, since 1971 the value of the dollar has lost 97.5% against gold. This means that only 2.5% of the real purchasing power remains. The fall of the dollar to its intrinsic value of ZERO is only a matter of time. But remember that this coming fall means that the dollar will lose 100% from today in the next few years.

All central banks have destroyed the value of money in the last 100 years with most people being totally unaware since they don’t understand that gold is constant purchasing power and eternal money and reflects governments mismanagement of the economy.

The coming collapse of the dollar and other currencies will be catastrophic for the world and have devastating effects on the US and global economy.

GOLD AND STOCKS ON THE MOVE

Gold has moved $130 in a short time and thereby broken decisively the 6 year Maginot Line at $1,350. Gold should reach $1,650 fairly quickly and then later move to new highs.

Very important changes will soon take place in markets with the 2007-9 crisis returning with a vengeance. The final phase up in US stocks could last a few weeks and most likely not more than 2 months. Thereafter a secular bear market will start that will be devastating for the world economy, the financial system and paper money. Wealth preservation is today more important than anytime in history.