As global central banks’ balance sheets are exploding, with disastrous consequences, the Swiss National Bank (SNB) stands out as the “biggest hedge fund” and speculator in the world. Its balance sheet is over $1 trillion or 136% of Swiss GDP. The Fed balance sheet is 35% of US GDP. So to compete with the SNB in percentage of GDP, the Fed would need to increase its balance sheet from the current $7 trillion to $27t. That seems like a big jump but not at all unlikely in the next few years. 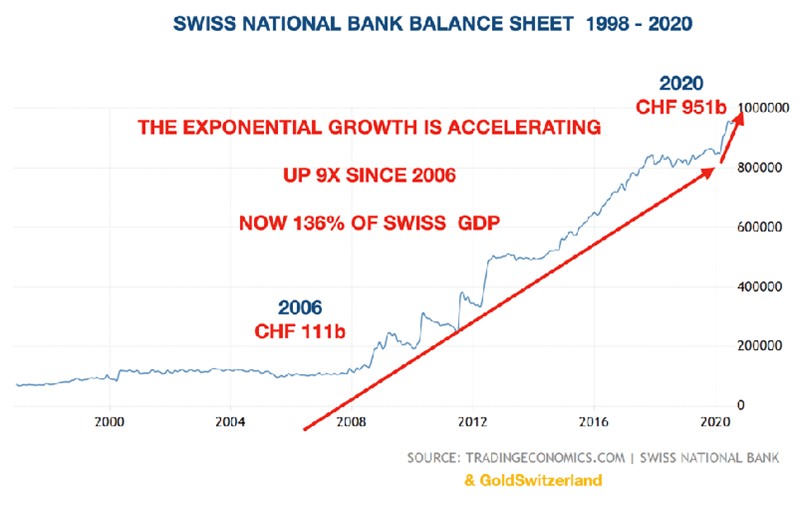 We need to remind ourselves that the Fed’s balance sheet is up 90% since Sep 4th 2019 from $3.7t to $7.1t. With money printing likely to accelerate, an exponential increase of another $20t does seem very likely. The growth from 2006 is 8.5x which is just below the SNB’s 9x. 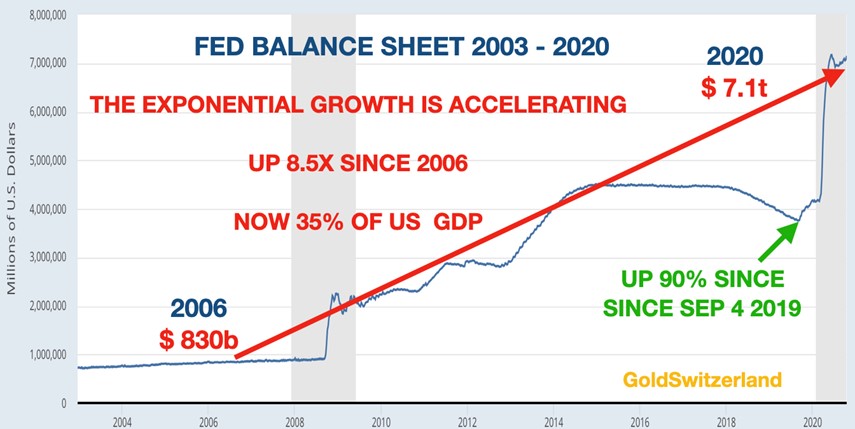 THE SWISS PEOPLE’S REJECTION OF SOUND MONEY AFTER SNB PROPAGANDA

In 2014 I supported actively the Swiss Parliamentarians who introduced the Swiss Gold Initiative. I wrote an article in October 2014 which started as follows:

To read the rest of the article click on this link.

Also, to peg the currency was always likely to have dire consequences. To that effect, I wrote and published, in early December 2014, after the gold initiative had been voted down, a fictitious memo from the President of the SNB to his board as follows:

Internal Memo Swiss National Bank
From: Thomas Jordan, President
To: The Board of Directors
Date: December 1, 2014

I have been quite concerned about the outcome of the Gold Initiative referendum. That is why I have been in the media virtually every day for the last few weeks. I know that the National Bank should not conduct a campaign during a referendum of this kind but since it was a matter of national importance I had no other choice.

As you know, until 1999 we had over 40% gold backing in our balance sheet. At the time it was thought that this amount of gold was critical for the stability of the National Bank and our national currency. But fortunately we managed to change the constitution which allowed us to sell more than half of the nation’s gold at the bottom of the market. We have been fortunate that the Bank’s reputation was intact after this decision which cost our nation CHF 30 Billion. It was clearly unlucky to sell the gold at the lows but market timing has never been our strong point.

I am extremely pleased that 77% of the voters agreed with my statements that gold plays no role in modern banking. Gold is a relic of the past. We can’t print gold and that is a major disadvantage when we want to manage our currency and financial markets. Our principles for managing the National Bank are now laid down by the Federal Reserve and ultimately Goldman Sachs. Here at the Bank we fully subscribe to the statement of the wise Mayer Amschel Rotschild: “Give me control of a nation’s money and I care not who make its laws.”

So fortunately we don’t have to buy any more gold and we should probably consider selling the 1,000 tons we may still own since it serves no purpose and has no yield. That would also give us ammunition to buy more euros.

The one concern that I would like to share with the board is our currency position. As you are well aware, we have printed over CHF 400 billion and bought mainly assets in euros but also in other currencies in order to hold the peg above 1.20. We are all aware that printed pieces of paper are not really worth anything but since we are a national bank, we can just tell the people that it is real money. Fortunately they are wise enough to believe us.

The reason I have been so nervous about the referendum is that the Bank is now sitting on the biggest speculative currency position of any major central bank in the world. Our balance sheet of 522 Billion is over 80% of GDP which is an extremely dangerous position for our country. It is virtually impossible to get out of this massive position without a loss of 10s of Billions or even as much as 100 Billion. Obviously the people would ultimately pay for this loss.

The 1.20 peg is artificial and throughout history no currency peg has ever held in the longer term. Over time currency rates always reflect economic and monetary differences between countries. Since our economy, for a while at least, is likely to continue to be stronger than the weak eurozone, our home currency will naturally outperform the euro. We are of course extremely grateful that the voters listened to our information during the campaign and rejected the Gold Initiative. But sadly the Bank’s problems are not over.

This peg was critical to save the banks that had lent massive amounts of our national currency to mainly Eastern European banks. So now we are totally linked with the eurozone and at some point we should perhaps discuss to make this permanent. There are of course disadvantages to be tied to a very weak currency. Everything we buy in the shops is now more expensive. Also, we could be dragged down by euroland and end up with the same economic disaster they are in. But fortunately the people don’t understand these major drawbacks.

But the biggest problem with taking the euro as our currency is that the Bank would lose its ability to be independent. The ECB would take over and we would lose all our power to print money.

Therefore I recommend to the Board that we stay as we are. But that still gives us the headache of our CHF 470 billion speculative currency position. This is a timebomb and we know we will never be able to extract from it without very major losses. Hopefully the current board will have retired from the National Bank before this happens so a new board can be blamed for it.

Finally I would like to thank the Board for their support of my actions. The Bank now retains total “control of the Nation’s money” which is comforting.

Six weeks later, on January 15, 2015 after having penned the fictitious memo to the board of the SNB, the peg was abandoned and the Euro initially fell against the Swiss franc by 37%. This caused massive losses for the banking system and futures exchanges. Later on the decline settled at -13%. It also led to losses for the SNB of around CHF 40 billion as I had predicted.

You would have thought that the SNB would have learnt something from this painful experience. But NO is the answer! At the end of 2014 their balance sheet was CHF 550 billion. Today, 6 years later the balance sheet has exploded to CHF 950B as the graph at the beginning of this article shows. Of that 90% is in foreign currencies, primarily in euro and dollar forex positions. The SNB holds over $100B in stocks, one third of which is in US tech stocks.

So here we have the biggest hedge fund in the world, with a balance sheet of over $1 trillion, borrowing/printing almost the same amount of Swiss francs to speculate in foreign currencies. The Fathers of the Swiss confederation are most certainly turning in their graves against this mind-blowing speculative position which defies everything that Switzerland and the Swiss constitution stands for.

If the Swiss Gold Initiative had been accepted, the SNB would now be obliged to hold 20% of their balance sheet in gold. Of a CHF 950b balance sheet, that means CHF 190B in gold or 3,400 tonnes.

Interestingly 3,400 tonnes of gold is equal to one year’s gold production. Since the SNB already holds 1,000 tonnes, they would have needed to acquire another 2,400 tonnes. It would of course have been impossible for the SNB to acquire all this physical gold since it wouldn’t be available. Also, if they borrowed or printed additional funds to acquire this amount of gold, their balance sheet would have exploded, necessitating further gold purchases.

This was the whole purpose of the Gold Initiative, to restrain the SNB from irresponsibly expanding its balance sheet for currency speculation purposes. That is why the SNB campaigned so vehemently against it.

The one positive point for the SNB is that all these printed Swiss francs have not gone directly to the Swiss economy but to buy foreign currencies, primarily dollars and euros. Thus the positions are easier to unwind than the Fed’s or ECB’s printing which is virtually impossible to unwind. Still the unwinding would involve massive losses.

WORLD CENTRAL BANKS WILL SOON CATCH UP WITH THE SNB

But this is where the world is now going. As the world’s central banks desperately fight for the survival of the world financial system, they will print unlimited amounts, initially in the hundreds of trillions and when the derivative bubble bursts, we are likely to see quadrillions of dollars, euros etc being magically created out of thin air. Whether this will be current dollars or euros or new digital currencies will make zero difference. Fiat money will always remain fiat money, whatever spin central bankers will put on it.

So investors who are not yet prepared for this, still have a small window of opportunity before currencies, led by the dollar, collapse.

Precious metals, especially physical gold and silver will obviously reflect the collapse of the fiat currencies and continue their uptrend, which will soon be exponential.