Will this be the Fall of Falls. 10 years after the Lehman collapse, will we again have an Autumn of Shocks in financial markets? The odds are very high!

Overstretched stock markets look extremely vulnerable including 13 recent Hindenburg Omens for the US market. The Dollar could soon be on its final leg to oblivion and US Treasury Bonds on the verge of a major fall that will eventually lead to hyperinflationary yields like Argentina and Turkey in the 20%+ region.

SILVER LINING & BARGAIN OF A LIFETIME

There is always a silver lining of course and a golden one. Silver and gold, together with precious metal stocks, will soon start an extraordinary journey to levels that few can imagine. The undervaluation of this sector is best represented by the XAU gold and silver index. At inception in January 1979, this index was 100 and today after four decades of inflation, money printing and credit expansion, the index is standing at 63. 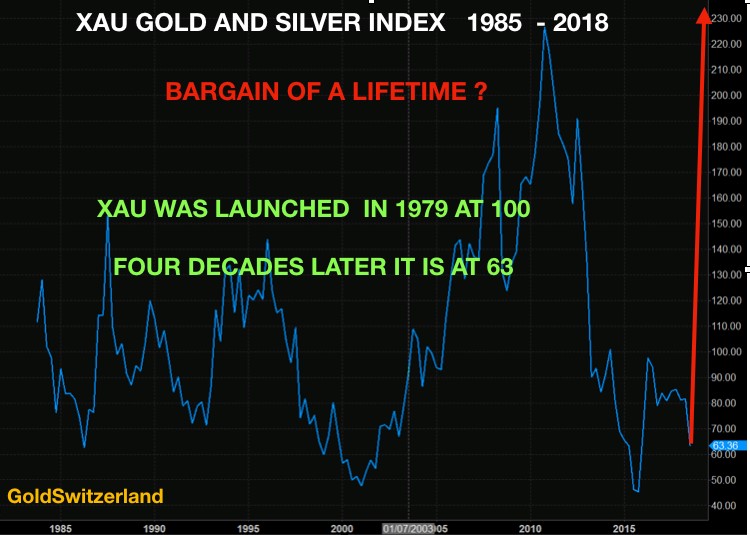 “IT IS DIFFERENT TODAY”

The final moves before a secular turn in world markets are often emotional roller coasters. Many investors know, at least subconsciously, that markets are overstretched and can turn at any time. Since Central Banks have consistently “saved” investors in the last few decades, why wouldn’t that continue? Stock market bulls might be apprehensive after a 9 year bull move. But very few are prepared to get out. Greed and recent experience tell them that “the market always goes up”. Very few know that the market fell 90% in 1929 to 1932 and took over 25 years to return to the 1929 level. And even if they did know, “it is different today because …..” 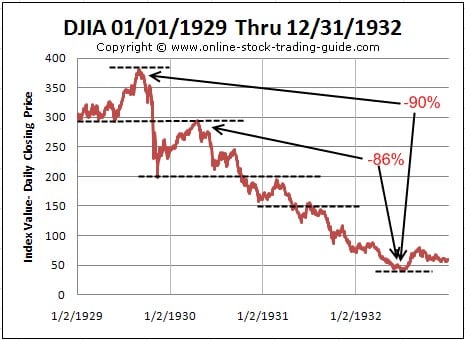 Forex is the biggest market in the world with almost $6 trillion daily volume. So in just over 2 weeks, there is more currency trading volume than global annual GDP. It is of course a market with only paper trading and no physical settlement. Interestingly Deutsche Bank has 20% of all forex volume. No wonder that bank is more exposed than any other bank. Global daily Forex volume is 200 times the daily volume on the New York Stock Exchange. The value the currency, whether it is Dollars, Euros Yuan or Yen has a massive bearing on people’s standard of living. But very few understand this, mainly because no government tells their people that they are consistently destroying the value of the currency.

The best way to protect against the constant erosion of the currency is to own gold which is the only money that has survived in history.

With no shackles central banks have had a unrestrained freedom to manufacture fake money by unlimited printing. 5,000 years of history and tradition as the only money that has survived has given gold total supremacy as King Money.

No paper money can ever make that claim. It is pitiful how Emperors, Kings and Central Bankers have all, when government coffers were empty, resorted to making fake money which by definition is always worthless. But just as no one dared to point out that the Emperor was naked, no one today dares to say or understands that the whole financial system rests on a foundation of nothing.

The bankers and the powers that be have a vested interest to keep this going as they are major beneficiaries. Ordinary people haven’t got a clue what is happening. They see prices going up but they think that this is normal.

Whatever Nobel prize winner Krugman says, paper money doesn’t fulfil the basic criteria for real money as a store of value. What ordinary people don’t understand, because governments suppress the truth, is that the value of their money is constantly being debased. Just look at the US dollar since 1971 against gold. $35 bought an ounce of gold in 71. Today an ounce costs $1,200. That is a 97% devaluation in 47 years. 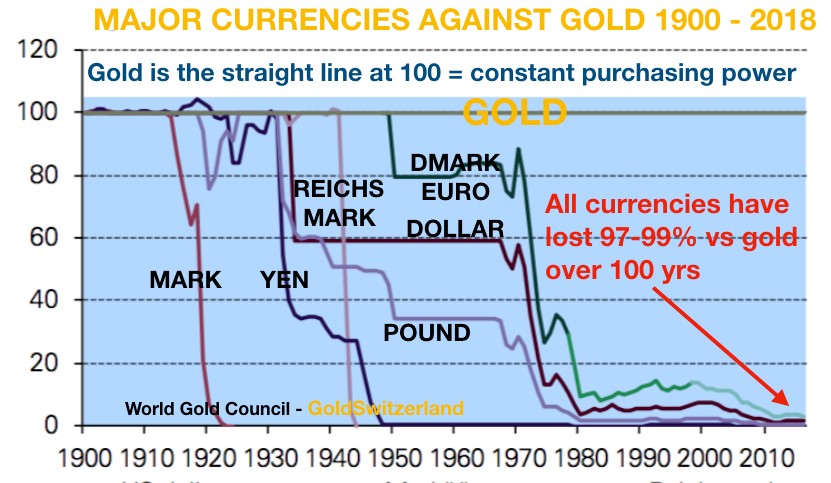 Americans are not quite yet in the same boat as the Venezuelans who have lost 99.9% on their Bolivars this year only. And Argentina is on its way to do the same and so are many more countries.

What is virtually guaranteed is that the US with its massive debt and accelerating deficits will end up in the same situation within the next 7 years. With a 97% fall of the dollar since 1971, there is only 3% to go. But as the people in Venezuela have discovered this year, that final fall involves a total destruction of the currency and also of the economy. It also destroys people’s lives totally as they struggle to survive physically and financially.

This is the inevitable consequence of socialism. You always, without fail, run out of other people’s money. And since socialism gradually takes over in country after country. The economic collapse that is now taking place in the periphery – Venezuela, Argentina, Brazil, South Africa, Turkey, Indonesia etc – will spread at a fast pace to all emerging countries and then on to the Western economies. Thus socialism is a guaranteed route to hyperinflation. It is only a question of how long it takes before you get there.

Since gold is the only money that has survived throughout history and the only money which has maintained purchasing power, the corollary is that all fiat currencies are fake creations of governments with no underlying real value and no real counterparty. A printing press can hardly be considered as a solid counterparty, nor can a government that just issues debt instruments whenever it runs out of real money.

Thus paper money is no better than the $1.5 quadrillion, or more, of outstanding derivatives. Both these instruments will reach their intrinsic value of ZERO in the next few years.

Since no bank will survive in its present form, people need to think seriously if they should lend the bank any money. Bail-ins will certainly be back. Personally if I lent the bank my money, I would ask for collateral in physical gold. With bank leverage of 10 to 50 times how can anyone deposit money with them without taking security.

With the current state of most banks’ loan portfolios, no bank would stand today if they had to provide properly for all non performing loans. And that is today. When credit losses increase, central banks will crank up the printing presses but this time it will have no effect. You can’t solve a debt problem with more debt.

In any case, the world financial system has now got a serious disease that can never be cured. Rather than adding fuel to the fire, the only solution is to let the fire burn the whole system to the ground. That will get rid of all debt and that is the only way to clean up the gargantuan mess that governments and bankers have created in the last hundred years. Let the sick forest burn down so that fresh and strong new shoots can develop.

The problem is of course that when the debt implodes, so will all the assets that were inflated by this debt. That is why within the next 7 years we will see the biggest wealth destruction in history.

So let’s come back to the silver lining and end on a positive note. In every crisis there is opportunity. The Greek word for crisis means to separate or sift and only keep what is worthwhile. And this is what the investors who want to survive the coming crisis must do. Get rid of all bubble assets AND BUY HARD ASSETS.

The chart below illustrates it perfectly. Since the IPO in 1997 the Amazon stock is up 1,550 times or 155,000% against the XAU Gold and Silver Index. That the reverse will happen and the XAU will be up 155 thousand percent against Amazon by 2025 might be possible even if it is hard to imagine today. What is clear though is that the bubble assets have had their run and their fall will be brutal. 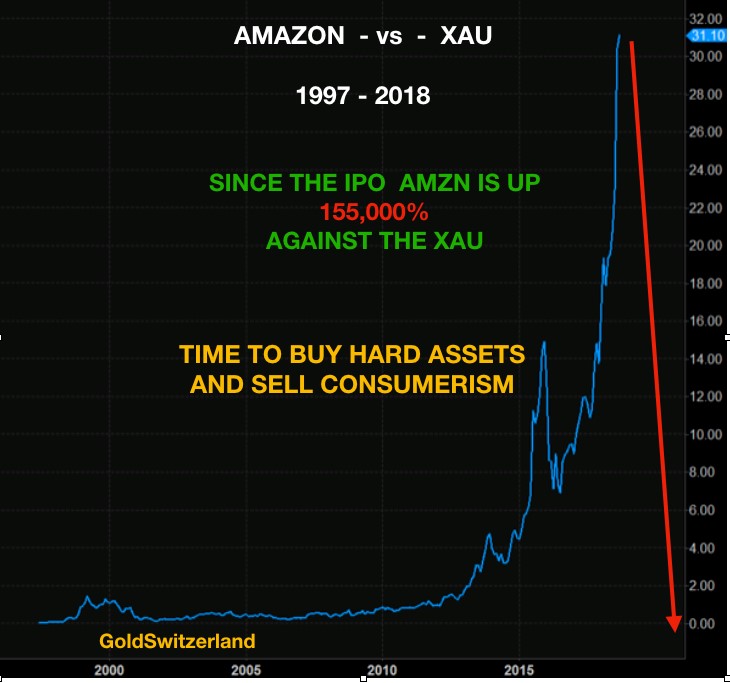 Everyone must draw their own conclusion. Are the likes of Amazon and Apple the road to salvation or is the best way to survive the coming crisis to own the most unloved and undervalued assets in the world. Most people will make the wrong choice. Best not to be one of them.