With global investment markets standing at crossroads, investors have the option to lose it all or to benefit from the biggest wealth transfer in history. I have quoted this passage from Shakespeare’s Julius Caesar many times but it is more appropriate than ever for the situation the world is now in:

“There is a tide in the affairs of men
Which, taken at the flood, leads on to fortune;
Omitted, all the voyage of their life
Is bound in shallows and in miseries.
On such a full sea are we now afloat;
And we must take the current when it serves,
Or lose our ventures.”

Sadly, very few will take the correct current and that is why the majority of people will end in shallows and miseries. The wealthy will lose the majority of their fortunes and many of the poor be exposed to poverty and famine. I know this sounds like another prophecy of doom and gloom but we don’t need to go further than Venezuela, with inflation reaching 1 million percent and the currency collapsing by 99.9% this year to understand what can happen. A cup of coffee costs 2 million Bolivars and most Venezuelans can neither get hold of nor afford sufficient food for their family. A major part of the adult population has lost 25 pounds (11kg) in weight.

In most countries in the West, it is still not too late to prepare a wealth preservation plan. People who have savings and investments have a lot more to lose relatively than the poor but for the less well off it will be a matter of survival just like for the Venezuelans.

There are many survival guides as regards all aspects of life. Jim Sinclair has for example written an excellent “Be Prepared” series that covers many of these aspects.

Probably less than 1% of investors will take the tide which “leads to fortune”. What most people won’t understand is that the Central Bank credit expansion bonanza is now coming to an end. The exponential moves up in stocks, bonds and property prices, will turn to catastrophic falls that will destroy most of the wealth in the world.

In the next 3-7 years, it is not going to be a question of making a fortune but to lose as little as possible.

So let’s look at the major risks and the best financial protection.

The Dow and S&P indices have gone up slightly less but are still at all time highs due to the massive liquidity created by central banks since the 2007-9 crisis.

At the same time as most stock markets are greatly overvalued there are markets that are severely undervalued and ignored by most investors.

PRECIOUS METALS – TO OUTPERFORM ALL ASSETS

Although we are going to see commodities outperforming all asset markets, it will be critical to pick the right ones. Gold, Silver, Platinum and Precious Metal Stocks are of course the obvious choice. Not only is the precious metal complex extremely oversold against all the bubble assets but it is also the ultimate wealth preservation asset.

To understand the underperformance of the precious metals, let’s look at some enlightening charts: 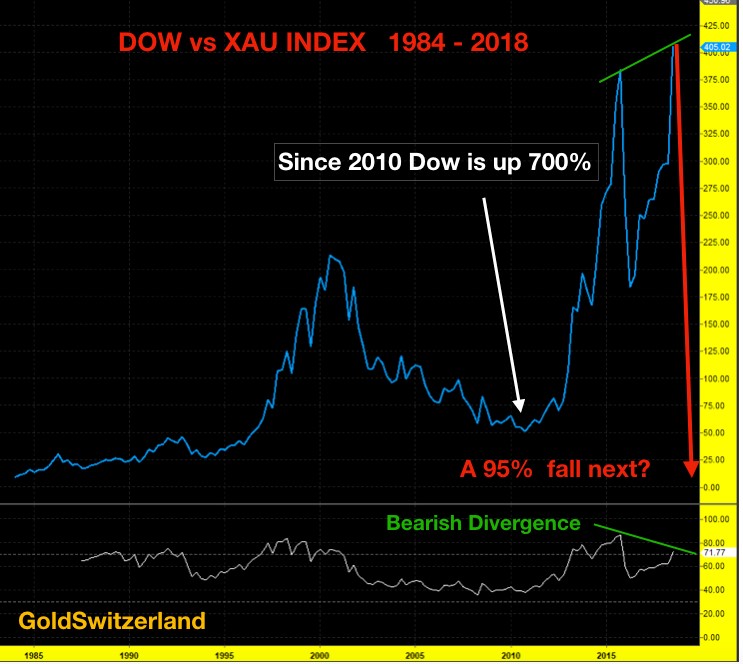 Since 2010 the Dow is up 700% against the XAU Gold & Silver Index. A move back to the 2010 level is a minimum. That would be an 88% decline. But bearing in mind the extreme undervaluation of the XAU stocks and overvaluation of the Dow, a fall of 97% to the early 1980 level is more likely.

The Nasdaq’s relative overvaluation is even more extreme: 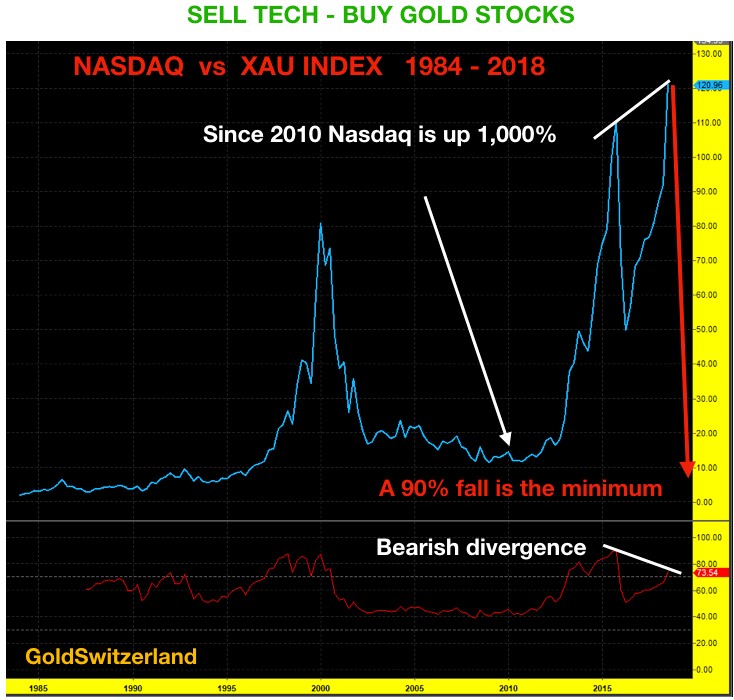 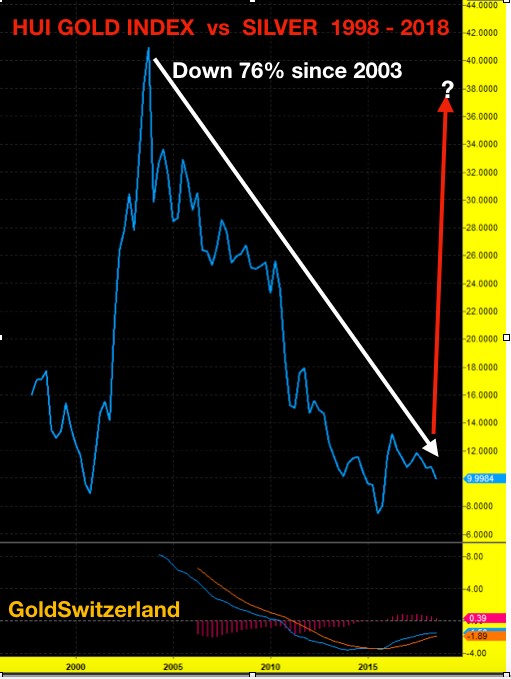 Platinum has been very weak since 2008 and is soon likely to rise against gold. 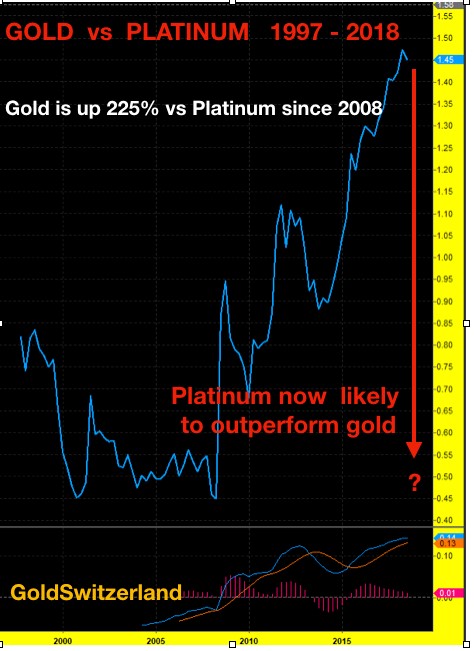 Finally we have the ratio that is very significant for precious metal investors, namely the Gold-Silver ratio: 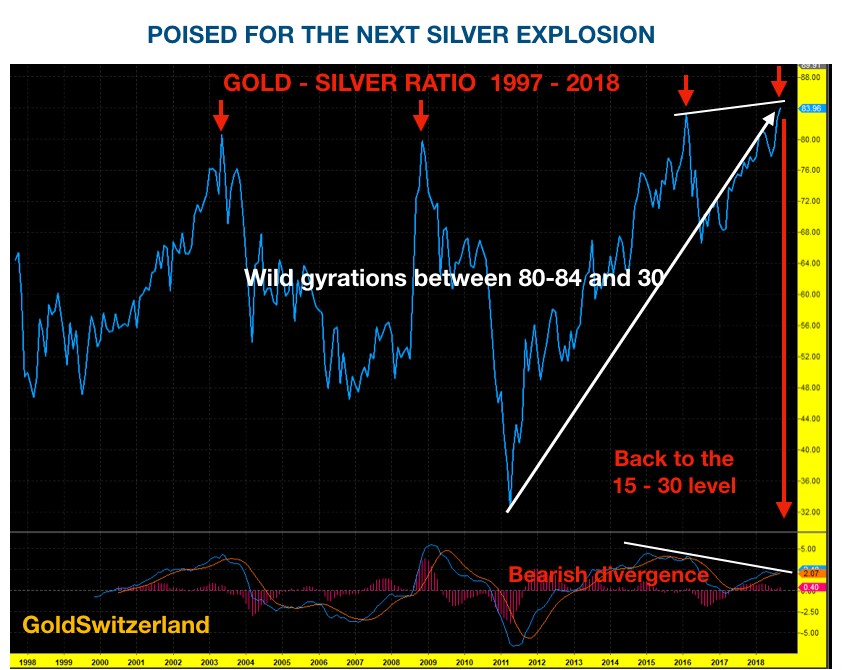 Since 2003 we have seen the Gold-Silver ratio fluctuate between the 80-84 level and 30. In 2018 it has reached a new high for this century of 84. But momentum indicators are not confirming this high which is bullish for silver. A return to the 2011 level of 30 is very likely and probably to the historical average of 15. Reaching 15 would mean that silver will move almost 6 times faster than gold. If gold for example reached $10,000, silver would be $666. An almost 5000% increase sounds incredible today but once the manipulation and Comex fails, there will be little to stop silver.

Whatever level the precious metal sector reaches is at this point irrelevant. The purpose of the graphs above is to show that precious metals are likely to vastly outperform ordinary stocks. They will also outperform most other bubble assets such as property and bonds. And as I have shown many times including in last week’s article, precious metals are the best protection against the collapsing currencies.

But even the expected precious metals’ outperformance is not what will be important in the next 3-7 years. Much more important is the preservation of capital. It will also be vital to protect against counterparty risk in coming years. Any major assets within the financial system is in my view an unacceptable risk. If you hold precious metal stocks, it must be done with direct registration which in some countries is difficult to achieve.

Physical precious metals held outside the financial system is the best form of wealth preservation as long as they are held in the right jurisdiction with direct control and access.

The King of wealth preservation is of course gold. From a historical perspective gold must form the bottom of the wealth pyramid and be the biggest holding. Even if silver and platinum are likely to appreciate more than gold, they are much more volatile and we would therefore recommend less allocation to these metals. They are wonderful when they go up but corrections can be vicious and testing for a nervous investor.

Although the precious metal stocks look extremely attractive, remember that even with direct registration, they are paper assets and therefore not a proper wealth preservation investment.

For the investor who understands the unprecedented risks in the financial system, the next few years could turn a massive potential loss to economic peace of mind and financial security.

What is so sad is that less than 1% of investors will realise this before it is too late.