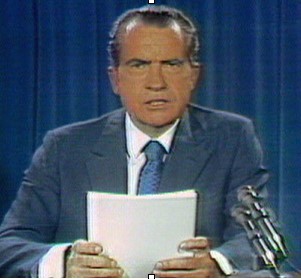 The world is now standing before a seminal moment and virtually nobody can see it. There has not been a more critical moment in the last 50 years than what we are now facing. In 1971, the world faced a similar situation. At that time, only the Chinese understood the consequences of Nixon’s decision to close the gold window.

The People’s Daily in China said in August 1971:

“mark the collapse of capitalist monetary system with the US dollar as its prop”…. “Nixon’s new economic policy cannot extricate the US from financial and economic crisis.”

“The policy is meant to fleece the American working people and to shift the worsening of the US financial and monetary economic crisis onto other countries.”

THE DECAY AND DECLINE OF THE WHOLE CAPITALIST SYSTEM

So almost 50 years ago, China predicted “the decay and decline of the entire capitalist system.”

The US economy is running on empty which is no wonder since massive money printing of worthless paper money cannot create any real wealth whatsoever but only inflated paper wealth.

But it is not just the US which is in this position. Because taking away the gold backing of the dollar in 1971, gave all countries a free for all right to print money and expand credit.

I HAVE PERSONALLY WITNESSED THE DESTRUCTION OF MONEY

My business life coincides pretty well with this period, working in a Geneva bank from 1969. So I do remember the start of the destruction of money. Moving later to the UK, I saw the pound collapse against the Swiss Franc from CHF 10 in 1972 to Swiss Franc or CHF 1.20 today, an 88% fall of the pound. And against gold, the pound has lost 99% since 1971.

A period of economic mismanagement and political upheaval in the UK in the 1970s started it all. Annual inflation was 15-17% for a 7 year period and interest rates reached over 20%.

The financial system was minutes from collapsing in 2008 during the Great Financial Crisis. Eleven years later, global debt has doubled and risk has increased exponentially.

Central bankers are aware that the world economy is now standing at a crossroads. The big problem is that they don’t have a choice of what path to take. The path was laid by them many decades back and now there is no way back. The Chinese understood already then where the path would lead.

August 2019 is in many ways similar to August 1971. America was back then in a corner. The country was under pressure after the costly Vietnam war and the gold standard stopped the US from cheating the system by printing money. The rest of the world saw the US’ precarious situation and started selling dollars. To salvage their position, Nixon saw no other way than to take the dollar off the gold standard and this was the start of half a century of global money printing and credit expansion on a humungous scale.

Nixon’s August 1971 decision has led to a crisis of unprecedented proportions. Still, very few people can see that we are now at the point of “a final and total catastrophe of the currency system involved” as von Mises said.

This August is not one single event like in 1971 but a number of very clear indications that all central banks are panicking. Every major central bank is now showing a degree of concern which is unprecedented. They are all telling us that there will be unlimited money printing combined with zero or negative interest rates. This will obviously not clear up 50 years of irresponsible monetary mismanagement.

So what Nixon started will now be finished off by current governments and central bankers in a most spectacular money printing bonanza leading to hyperinflation and a collapse of the financial system.

So far, over 40% of global bonds now yield less than 1% and over $16 trillion worth of bonds have negative interest.

Negative interest rates are of course a total absurdity. They totally destroy the incentive to save and also pensions. In Denmark you can now get a 10 year mortgage with Jyske Bank at MINUS 0.5%. Imagine, you buy a house and the bank charges nothing for the loan but instead lets you pay back less than you borrowed. It will become even more interesting when mortgage rates go to minus 25% so after a few years the debt has been paid by the bank!

US RATES TO DECLINE SUBSTANTIALLY

95% of global bonds are now below the Federal Funds rate. But since that rate is 2.5%, this is a temporary situation. US rates are likely to decline dramatically during the autumn to zero or negative. That will lead to a lower dollar and higher gold. US stocks will also decline from their current dizzy levels, in spite of lower rates.

Lower rates are no longer seen by stock market investors as beneficial for markets but as a sign of economic trouble ahead.

Fed Chief Powell just declared that the “Economy is in a favourable place”. You wonder where that place is since there is nothing favourable about the US economy currently. And it seems that Powell doesn’t believe his own words since in the same breath he says that there are “significant risks”.

Trump takes every opportunity to attack Powell and asks “who is the bigger enemy Powell or Xi” and then announces sharply thereafter another round of tariffs.

So the Tit for Tat game between the US and China continues and what is certain is that everyone is a loser in a trade war. Trump won’t give in and nor will China. As they play their games, world trade will suffer and so will a fragile world economy. Global trade is already down and we will soon see the fall accelerate dramatically.

Trump is clearly going to win this game over Powell. Trump has declared that rates should be reduced by 1% now. Thus we are guaranteed to see much lower US rates and a rapidly falling dollar during the autumn.

BOTH BOJ AND ECB WILL ACCELERATE STIMULUS

Kuroda the Governor of the Bank of Japan also made it clear three weeks ago that they will not hesitate to expand stimulus if a global slowdown jeopardises the country’s recovery. And PBOC, the Chinese central bank is also indicating that it will lower rates for companies.

The ECB is the central bank in real trouble. The German and the whole Eurozone economy is weakening dramatically and the banking system is on the verge of collapse with ailing banks not just in Germany but in Italy, France, Greece etc.

EU growth has slowed down rapidly since the ECB July 25th meeting and Draghi has virtually promised more stimulus in September. The ECB minutes indicated that we should expect a combination of rate cuts and asset purchases.

CENTRAL BANKS ARE IN PANIC MODE

Although all the central banks are staying calm on the surface, the real situation is panic mode. What we are seeing is not isolated planned actions but a coordinated programme in an attempt to protect the global economy and financial system from collapse.

The central bank chiefs no longer have a choice. They don’t have the luxury that Brutus talked about in Shakespeare’s Julius Caesar to take the tide that “leads to fortune”. Instead the only option they now have is the tide which “Is bound in shallows and miseries”.

So in August 2019, central banks have by their actions told us that that the world is now facing the final phase of the destruction of the world economy that Nixon started in August 1971.

The autumn of 2019 will see global trade decline rapidly and also economic activity. Stock markets around the world will crash and currencies will continue their race to the bottom.

Most bond rates are already below the zero bottom and we will see that trend accelerate. At some not too distant point, the bond bubble will stop expanding with long rates going up and eventually also drag the short rates up. At that point, central banks will have lost control of interest rates and the world will see a debt collapse of massive proportions. Rates will go to the teens initially and later to infinity as bonds become worthless.

The very interesting chart below from SignalsMatter.com tells the above scenario in a beautiful way.

The chart shows the S&P Index divided by the 2/10 year Treasury spread.

The green area shows that the risk of a turn is extremely high. This indicator predicted the 2000 crash and also the 2007-9 crash. The Green area since 2017 shows much higher risk than the previous two crises. We are now at the Tipping Point which in simple terms means that we will first see stocks fall rapidly and a bit later interest rates rise. The size of the bubble and the extent of the risk will this time lead to a fall much greater than in 2000 and 2007.

A CRASH IS IMMINENT 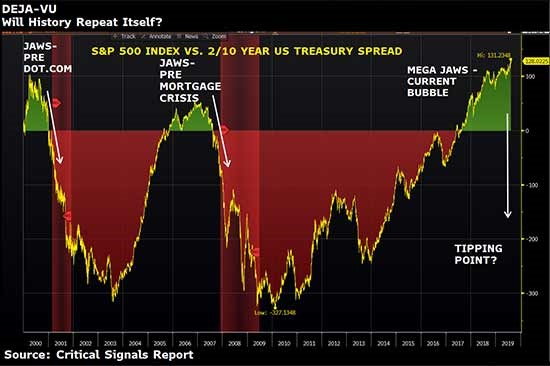 The message from the chart above is very clear. The position of stocks at an extreme overbought situation combined with bond rates at an extreme low, indicates that we are now at the tipping point and thus not far from a major market crash.

DOW/GOLD AT THE BEGINNING OF A 95% FALL

Since 1999, the Dow is down 63% against gold. Just since April this year the Dow has fallen 20% against gold. But this is just the beginning. This ratio will go below the zero line, where it was in 1980. This size of such a fall in the Dow/Gold ratio means that if you hold gold instead of stocks, you will avoid a relative loss of at least 95% in the next few years.

Gold is up 44x since 1971 in dollars. But as I have explained many times, it is not really gold going up but paper money collapsing. This is what Nixon started almost half a century ago. Central banks around the world have now been handed the batten and they will finish the job in the next 3-6 years. Finishing the race means currencies going to ZERO and massive wealth destruction in the form of collapsing asset markets including stocks, bonds and property.

Physical gold and silver will, as they always have, reflect these moves and move to unimaginable levels which will be far beyond the 44x that we have seen since 1971 for gold. Since fiat money will be worthless, it is clearly not right to make a forecast in paper money as it would be infinity. Suffice it to say that gold and silver will maintain purchasing power as they always have and also be the most important wealth preservation asset to hold. 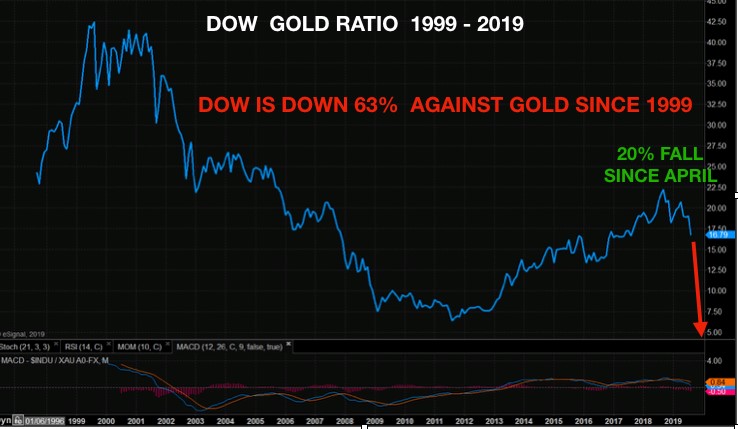 99% OF INVESTORS WILL SEE THEIR WEALTH WIPED OUT

Sadly 99% of investors will not realise that they should be out of stocks and into gold until their wealth has been wiped out. All stock investors will believe that central banks will save them again. But as I have outlined above, this time it will fail as we start a secular bear market in stocks and the world economy which will last a very long time and lead to a massive wealth destruction.