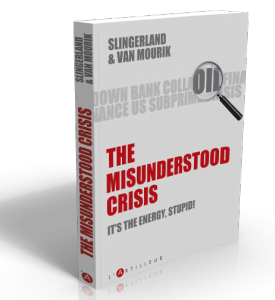 Lars Schall: Maarten, you have co-written a book recently with your friend Oskar Slingerland, The Misunderstood Crisis with the sub-title It’s the energy stupid. Why the title?

Maarten van Mourik: Because we have this financial crisis and everybody goes on and on about how we have to get out of this subprime crisis and everything that happened to the banks, but we believe that the crisis is only partly financial and mainly due to an energy problem and more in particular to the problem of having access to cheap and profitable oil.

LS: Yes, let’s discuss that in more detail, but first: How important is oil?

MvM: Oil is very important. People give different estimates that it might amount somewhere between 30 or 60 percent of global GDP, but basically oil is everywhere and roundabout 95 percent of our transportation needs are covered by oil, and then obviously just look at your clothes that you’re wearing, it’s oil.

LS: Is there a correlation between the price of oil and economic growth?

MvM: Yes, over a long period we have a quite strong correlation between the two, and we would say that given the high prices of oil that we have been seeing for the last, well, close to ten years, it’s hardly a surprise that we don’t have very much economic growth going on and that everything today has been effectively printed out of thin air.

LS: Would you say that there is a price from which it becomes impossible to gain economic growth?

MvM: Yes, I would think so and people have asked this before and talked about it at what levels of GDP the oil price would be too high. I think we’re looking at a moving target, because over time our personal income is diluted from inflation problems and effectively the ongoing issues with disposable income. So, as time goes by our tolerance for the price keeps going down.

LS: Related to the oil price spike of 2007/2008 which saw records prices in oil, I would like to ask you why was this the real trigger of the financial crisis?

MvM: Well, basically in my view is that the shock to the economy and the amount of money needed to keep the economic machine running was just too much.

LS: And people had to spend money on oil instead of their mortgages?

LS: Was speculation part of this?

MvM: This is an ongoing debate. I think to a certain extent there was speculation involved, but I think in the end it’s the supply and demand fundamentals that have caused this price to sky-rocket.

LS: In your book you are telling that you were not surprised by the price spike in 2007/2008; instead you were doing something to gain from it, can you tell us about this please?

MvM: Yes, sure. I gave the advice to a couple of traders who effectively took a position in it by buying call options which were well “out of the money”, as they call it, and they just came into the money as time progressed, so they made a good run of it and we belonged to the few people effectively playing this game.

LS: But how did you come to the conclusion that the price would spike?

MvM: Well, it started in ’98/’99 with the oil sale developments and oil company investment behavior; we counted all the individual fields and how much development was going on and we plotted the impact through the capacity that we developed for it and then plotted the demand projections against it – and the simple conclusion was that there wouldn’t be enough fuel development going on to fill both the demand growth and the decline in the oil fields as we call it. The existing fields become older and older and you produce less and less from existing fields and you have to replace it with new fields and new fields investment require activity from oil companies and they will only do so when it is profitable and it wasn’t very profitable in the late 90s. It was highly profitable in the mid-2000s, and again now it isn’t very profitable anymore.

LS: But it is very profitable to develop fracking in the US?

MvM: Well, this is an interesting point of view that you have there because we did calculations on the economics of the companies involved in oil fracking and we came to the conclusion that most of these companies are not making very much money over the longer-term as far as we have been able to discern from the financial reports being published. In fact, we would think that given the decline rates in these oil wells the capital expenditure is becoming more or less a sort of operational expenditure and then oil becomes very expensive to calculate on that basis. So, to me this is probably the most expensive oil in the market.

LS: Yes, however isn’t the current price of oil and the development of fracking due to high prices a replay of what we saw in the aftermath of the oil shocks in 1973/74 and 1979 related to the oil developments in Alaska and in the North Sea?

MvM: No, I wouldn’t name it like that because the fracking is more like a production type process. So you have to do it continuously. If you stop the capital expenditure or basically developing the new wells then your production profile falls back very quickly – and this was not the case in either Alaska or the North Sea. So all this money had been spent and has been spent in these two areas, but the production that came from it has lasted a very long time. So it’s not directly comparable.

MvM: Yes, that’s entirely true, but the difference is that it requires a constant stream of money in fracking to sustain the production levels, whereas in Alaska and the North Sea the amount of money invested was high, but then it gave also long profile of substantial amounts of oil coming back in without requiring additional large amounts of capital expenditures.

LS: What do you see coming in the next years? Is there some kind of vicious circle involved in the financial crisis that only few pay attention to?

MvM: Yes, I would think so. If you look at the amount of crude oil being produced, it has been static more or less since 2005. We have been throwing all sorts of money and all sorts of liquids to the market and we just can’t get the price down. So fracking is not a real solution, because it’s not a cheap form of energy that goes into the economic engine. So, one way or another we have to find something that is cheaper or we have to reduce our demand – and demand is only being reduced when the price goes high enough.

LS: What can our societies do to solve those problems related to energy?

MvM: We have to be much more energy efficient. Effectively prioritize different things; we can drive smaller cars for instance.

LS: Do we also have to over-think our way or our obsession with economic growth?

MvM: Yes, I think it would be an entirely good thing to start thinking about, for instance, goals and quality rather than quantity. I think there is a lot of misguidance and erroneous thinking about how economic growth can only be achieved by increasing the scale of production..

LS: Do you also think that we have to over-think our financial system vis-à-vis high energy prices?

MvM: I think that we should try to become a little bit more conservative in the way that we finance our system, our companies. I think we should having a more long-term view of financing like we had before – basically corporate type banking.

MvM: It looks like it; they’ve been investing considerably in buying up resources in all sorts of countries all over the world when they’ve got the chance. So, I do think that they do.

LS: Final question, you would say that the financial crisis is everything but not over?

MvM: Absolutely. I mean, they’re tapering over it with printing money. So far it has gotten us very expensive oil. I can’t see how we get out of this without adjusting the balance sheets of these companies. Basically, let banks go bankrupt and let the system reset. Moreover, I would think to let the oil price do its thing itself.

MvM: Then people will adjust very clearly, very simply. If you go to the pump and you have to fill up your car with EUR3 per liter diesel, you will think twice about what you are going to put in.

LS: So, ultimately you are optimistic?

MvM: Yes, I think that we have good opportunities. Anything can be done; just the economic incentive needs to be there. When the oil price itself is high enough, the incentive is there.

LS: Thank you very much for the short conversation, Maarten

MvM: You are most welcome, Lars.

Maarten van Mourik (born 1967 in the Netherlands) studied micro-economics / industrial economics and shipping economics at Erasmus University in Rotterdam, Netherlands between 1988 and 1991. Afterwards he worked with the Netherlands Economic Institute on transportation policy research, mainly maritime transport. For Petrodata Ltd of Scotland he was doing offshore drilling rig and marine support vessel market forecasting. From 2000 onwards he has had his own business, doing bottom-up field by field non-OPEC supply forecasting, oil market analysis as well as forecasting offshore equipment markets. The work was supplied to OPEC as well as investment funds. As an economist he has worked on port infrastructure feasibility studies around the world. He favours independent analysis, Austrian economics and an eclectic approach to analysing and predicting market behaviour. He currently lives in France.

Tags: The Financial Crisis And Energy