Why do 99.9% of investors not own gold? Due to my interest and activity, I clearly meet a higher percentage than the 0.1% who both understand and own gold. But I also meet a lot of people who have been indoctrinated by their investment advisors and the media about gold’s uselessness. Most of these people don’t understand gold and don’t know the history of gold, nor its role as money.

So let’s list some of the facts without being too long-winded:

IF CHILDREN ARE NEVER TAUGHT TO UNDERSTAND MONEY, HOW CAN ADULTS?

All the above are indisputable facts. But no government or central bank will ever admit to it since the total debasement of a country’s currency shows the failure of their economic policies.

Economic history is not taught in schools. No child is given a proper lesson about money, savings or compound interest. They learn empirically about debt, credit cards and spending money that you haven’t earned. How will they ever learn, how will they ever learn about sound money and how to manage their own affairs? Well they sadly won’t.

Since school children are not taught about sound money and economic history, how can we ever expect adults to grasp this subject.

In the West, the majority of people don’t understand that the Dollar, Euro, or Pound in their pocket is falling in value daily, due to incessant credit creation and money printing. People think that house prices or stock prices are going up. And they believe that food and services are regularly becoming more expensive. Very few people understand that it is not the price of goods and services that are going up but that it is the value of the money in their pocket that is constantly declining.

The principal reason why gold is the only money that has survived throughout history is that it cannot be printed. It also has many other important attributes, such as scarcity, indestructibility, divisibility etc. 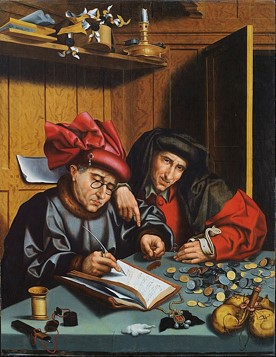 In the past, if someone performed a service or produced a product, he would be paid in gold and that gold would always maintain its value. Over time, the money changers and the bankers issued tradable notes that replaced the gold which was kept in their vault. They soon realised that they could earn a lot more money if they printed many more notes than they had gold. This is how the debasement of paper money started.

Imagine that someone had worked a whole day and received a gold coin as payment for his services. He then takes it to the bank to deposit it and receives a tradable paper note instead of his gold. But his banker is shrewd and issues another note as a loan to someone else. If this was the only transaction in the economy, by issuing the second note, the banker has now halved the value of the note. The banker is greedy and issues even more notes, so the value continues to go down. But the gold maintains its value whilst the paper money has been devalued. When the gold later was replaced by fiat money, that would be continually be debased as the banker as well as the government issued more and more paper money without any corresponding production of a goods or service.

In the last 100 years, since the creation of the Fed, more money has been printed than ever in history and we are now in the exponential phase with global debt having trebled since 1999 from $80 trillion to $250 trillion.

The current global financial bubble cannot and will not end well. All the fake money and asset values must implode together with the debt. It is for this reason that we must hold physical gold as protection against the coming calamities. And whether gold goes up tomorrow or in six months’ time is totally irrelevant, in relation to the risk we are trying to protect with it.

The reason why gold often fluctuates wildly has nothing to do with physical gold in a free market. The gold market is totally manipulated by central banks through the BIS in Basel (Bank for International Settlement) and its lackeys, the bullion banks.

The daily mine production of gold is $329 million. But the gross daily trading volume in the gold market is $280 billion according to the World Gold Council. So the daily gold trading is 850x the daily production. Most of that trading is done by the bullion banks and not the Comex or other futures exchanges. You don’t need to be an expert in trading to figure out that a market that every day turns over 850x the daily production of the underlying commodity is massively manipulated. Also, trading of that magnitude has nothing to do with physical gold but clearly has a much darker purpose. Surprisingly as the chart below shows, daily gold trading is 2x the trading in S&P stocks. 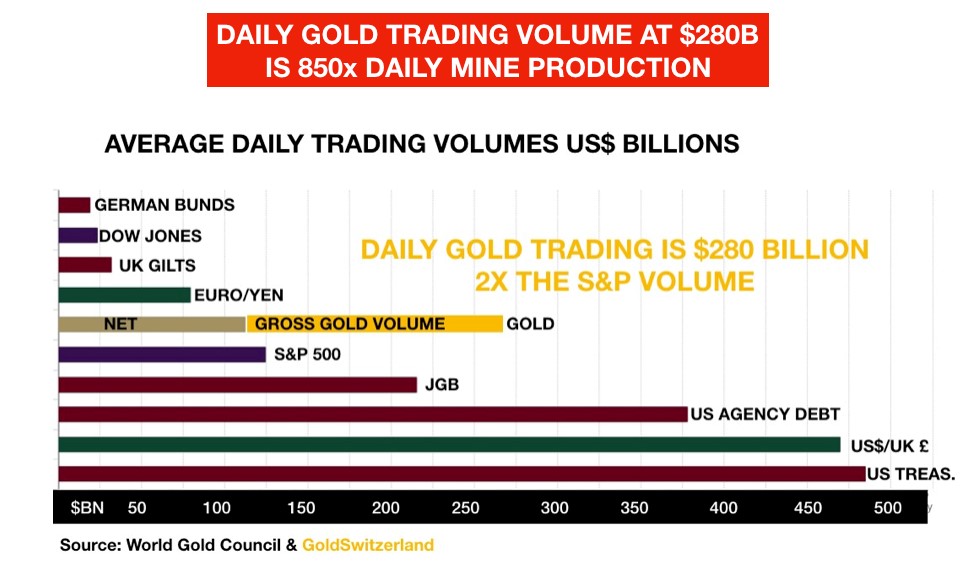 There are a number of critical factors that will soon lead to the crossing of the Gold Maginot Line at $1,350

The above list is certainly not exhaustive. It could of course be argued that many of the factors above have been present for a long time and gold has been going sideways for 6 years. 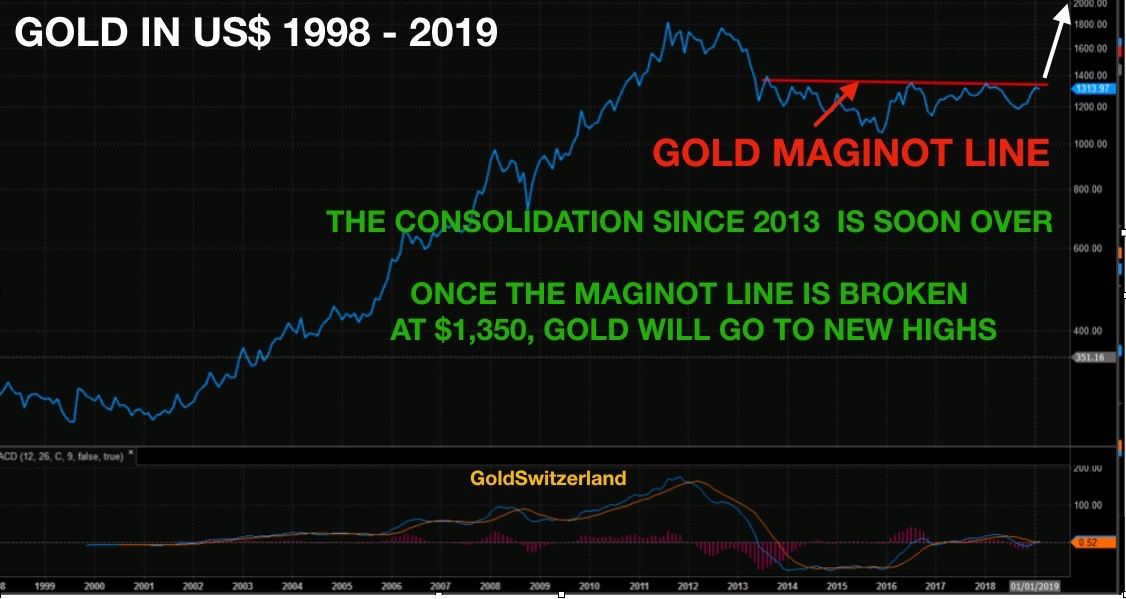 We then saw a major move to $1,920 in 2011. Another correction followed and for six years gold has oscillated below the $1,350 Maginot Line. But gold should not just be measured in one currency. It has performed very differently against other currencies. In dozens of currencies gold is above the 2011 high. Due to the dollar’s temporary strength, gold seems weaker than it is if measured against a basket of currencies.

So when will the uptrend in gold start again? Many investors who bought gold near the 2011-12 highs are clearly impatient.

The fundamental factors above are not going to help us with the short term timing of the gold price. Many of us did not expect gold to pause for 8 years. But having been seriously invested in gold for over 17 years since early 2002, we have patience.

So the only short term method to predict gold’s next move is looking at gold’s technical picture. This tells us that gold is now in the finishing stages of a corrective move. Once the correction is over and gold breaks the Maginot Line at $1,350, we will see a quick move to $1,600. I would not be surprised to see gold making new highs in 2019 against the dollar, above $1,920. The next move up could start as soon as in the next 2-3 weeks. Possibly, but less likely is that the move starts August – September.

But gold should not be bought for speculative investment purposes. Gold should be held as wealth preservation or insurance against a rotten financial system that is unlikely to survive in its present form.

Like any insurance, holders of gold should not hope for gold to surge. Because when it does, the world will be a much more unpleasant place to live. It is much better to enjoy the present times knowing that if and when the problems in the world start in earnest, you are protected.

SILVER SUPPLIES ARE GETTING TIGHT

The supply situation in gold is still acceptable. But in silver it is becoming more difficult to get hold of and Swiss refiners are confirming that silver supply is tight. What we must remember is that real physical trading volumes are low today. With the sideways move in prices, physical demand is not buoyant. But once gold clears $1,350 and silver $15.50, shortages are likely to arise.