Lethargic summer markets tend to instil a sense of false security. Stocks and property are near all-time highs, interest rates are at 72 year lows and most investors feel richer than ever. Central banks signal strong economies with indications of higher interest rates and tapering of their balance sheets.

As I discussed last week’s article about the Fed, we must never trust central banks since they are always hopelessly wrong. Sweden is another example of a central bank which has an appalling record in forecasting the economy. And it is not just any bank since I am talking about the oldest central bank in the world – Sweden’s Riksbank which was established in 1668. But age clearly means nothing when it comes to understanding markets and the economy. Below we see the Riksbank’s forecasting record for the Swedish Repo rate. It is just an appalling record which shows that during the last 7 years they have been hopelessly wrong. Several times a year since 2011 they have forecast rate increases of 1-2% and every year since then, rates have gone lower. In all, they have made 25 incorrect forecasts since 2011. Hopefully their record since 1668 has been more accurate.

Not only have they forecast higher rates but they have consistently lowered rates since 2011 and now have negative interest rates since 2015. It is quite amazing that a central bank makes 25 forecasts of higher rates but instead lowers the Repo rate 10 times. Rates have been manipulated lower to make the Swedish currency weaker in order to stimulate exports. These low rates have created a massive housing bubble in Sweden. Swedish consumer borrowing including mortgages are among the highest in Europe and any significant increase in interest rates will create a major problem in the Swedish economy and financial system, much worse than the early 1990s. As I have discussed before, the 35-year interest cycle has turned up and whether central banks like it or not, rates in the next few years will be much higher. Selling of long term bonds by nervous investors is what will drive rates higher. This will also pull the shorter rates up. 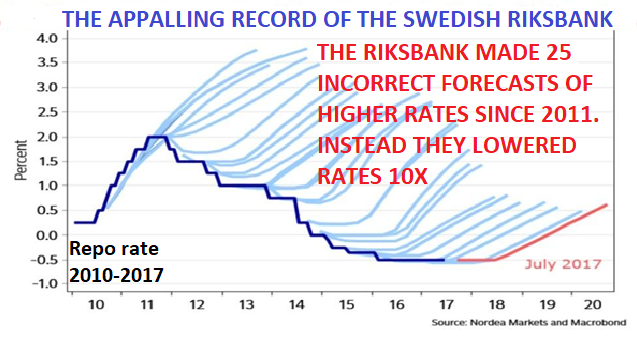 In the 17th and 18th centuries the Riksbank ran out of silver due to very high war debts. The bank resorted to paper money which quickly failed. They then again minted copper money which was not trusted by the Swedes with the consequence that the head of the Riksbank was beheaded in 1719. In the last 104 years since the creation of the Fed, most central bank heads have failed massively. So far there has been no beheading of a central bank chief in modern times but when the financial system fails in the next few years, many bankers will feel very vulnerable.

Whether a central bank is the oldest in the world or just one hundred years like the Fed, the problem is the same. All central banks make hopelessly inaccurate forecasts. As a result, they interfere with the normal economic cycle which has natural highs and lows of relatively small amplitude. It is this natural cycle which is totally destroyed by central banks’ manipulation. In their total lack of understanding of the laws of supply and demand, central bankers think they have divine powers. They believe that low interest rates and printed money creates economic prosperity whilst the opposite is the case. The only thing that this type of manipulation achieves is massive booms and busts that ruin the fabric of the economy. We have now had one of the longest artificial booms in history, so next is a bust that will totally change the world for a very long period. This time, the financial repression which temporarily delayed the inevitable disaster during the 2006-9 financial crisis will not work. Money printing will create hyperinflation and all attempts to lower the already low rates will fail. Central banks will be totally powerless in stopping the biggest financial crisis in history.

I have often discussed the global debt mountain which has grown exponentially for many years to reach around $2.5 quadrillion including derivatives and unfunded liabilities.

US mortgage debt or subprime debt was the major factor during the last crisis. Well, the Fed or the US government has learnt nothing. The subprime crisis in the US was minutes away from causing a global financial collapse. But US Household Debt has just surpassed the 2008 peak and is now at $12.7 trillion. 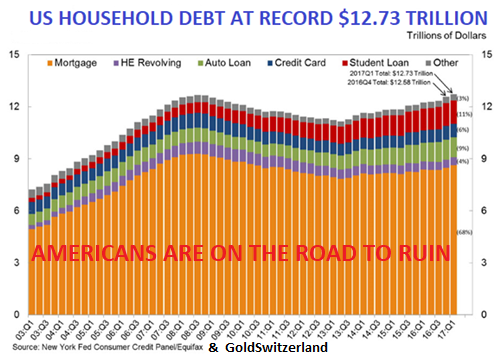 As interest rates rise and house prices collapse, the next mortgage debt crisis will be much bigger than the 2006-9 one. Eventually house prices could decline by 75-90% in real terms. The coming crisis will also involve two new subprime crises, namely Student, and Auto loans. Students not finding jobs will not repay their debts and many jobless car buyers will stop paying off their car loans. Collapsing second hand car prices will exacerbate the problem. So now is an excellent time to hold back on a house or car purchase. There will be real bargains in the next few years.

Whilst there is still euphoria in investment markets, investors have very little fear and very little understanding that the asset bubbles which have been created in the last few decades have nothing to do with real prosperity but are only based on debt, printed money and artificially low rates.

The Most Lethal Concoction of Debt

Incredibly, most investors see no danger in stocks, bonds, property and debt being at historcal highs. This is the most lethal concoction of bubbles that has ever existed in history. Of course, bubbles can expand further before they implode. But who wants to be in a bubble that bursts, resulting in losses between 75% and 100% in real terms. Because this is what will happen to stocks, bonds and property in most countries. I am well aware that 99.99% of investors consider these kind of projections as scaremongering doom and gloom nonsense. But even if history doesn’t repeat itself, it certainly rhymes and we know that bullishness is at a peak just before the cycle turns.

Since there is very little fear amongst investors in the West, very few are buying the cheapest and best form of insurance available as protection. Even more importantly, most people don’t realise that this investment has outperformed virtually every asset class this century. I am of course talking about gold. Since 1999, the Dow for example is down 60% against gold. Gold had a massive rise from $250 in 1999 to $1,920 in 2011. Since then gold has been recharging for the next leg up. Between 2013 and 2017, gold has traded in a $290 range which is very small compared to the $1,670 rise from $250 to $1,920 between 1999 and 2011.

The Gold Price is Fake News

Looking at the chart above, there seems to be very little interest in buying and holding gold. Gold currently looks very sluggish with a tendency to drift down easily. What most investors don’t’ understand is that the gold price as depicted by the chart above has nothing to do with the real price of gold. As with most financial markets today, the chart above is fake news. The gold chart shows the effect of covert financial manipulation at the very highest government and central bank level. And this manipulation takes place in the paper gold market which is many 100 times bigger than the physical gold market. The real players behind this dark, clandestine paper market are never revealed. All investigations are stopped at the source. At best some insignificant junior bank trader is fined. Virtually every trade that is executed to depress the gold price is done when most gold markets are closed and there are no buyers. The amounts of paper gold traded are also massive. No commercial seller would ever trade in such a blatantly idiotic fashion. Who would ever sell gold in huge quantities when there are no buyers and no market?

If this was a real market backed by physical gold, this type of trading would be impossible. With a seller dumping several months’ production in a few seconds, there is of course not a single ounce of physical behind. If the buyer demanded delivery, the seller would either default or pay $100s or even $1,000s above the market price to acquire the physical. But the truth is that the physical doesn’t exist to fulfil the trade.

There is only one Real Gold Market

The real gold market is the physical and in this market all gold produced has already been presold. In the real gold market, long term contracts absorb all the gold mined and refined. But the West doesn’t understand this market. Because the West trades false markets based on false values. Most trading in the world financial markets is in the form of derivatives with no delivery of the underlying assets.

This is why most of the people trading gold in the West have no concern about ever getting delivery. They see physical gold impractical and expensive to trade. Why hold physical when all you need is an electronic entry saying: x oz of GOLD. Virtually nobody realises that these electronic entries at some point will not even be worth the electricity that has been used to create them.
Whilst very few in the West understand the value of real money and insurance in the form of gold, most people in the East take the opposite view. Because both individuals and governments in the East continue to accumulate gold at ever increasing levels.

Just look at gold buying of the most significant Silk Road countries in the chart below. Since 1995, India, China, Russia and Turkey have bought 34,000 tonnes of gold. The buying has accelerated since the Financial Crisis in 2007. From 2007 to May 2017 these four countries have bought 26,000 tonnes of physical gold. This means that they have absorbed more than the mine production in the last 10 years. It is very likely that these figures greatly underestimate the buying of both China and India. The Indian figures don’t include the smuggling of gold which at times can reach very big quantities. And the Chinese authorities prefer not to reveal the real level of Chinese gold buying. Just in May, these countries bought 400 tonnes of gold. That is an annual rate of 4,800 tonnes, 60% above the annual global mine production of gold. 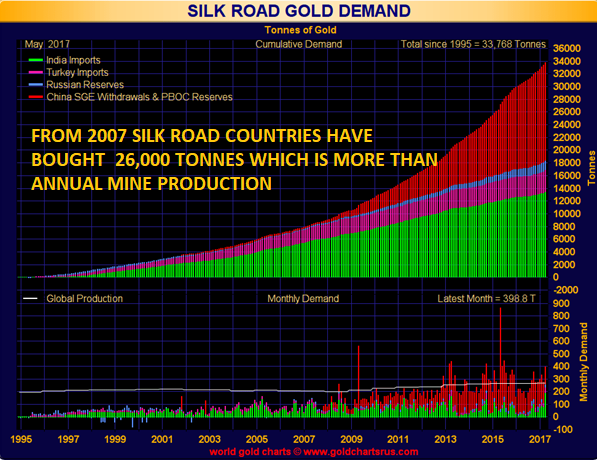 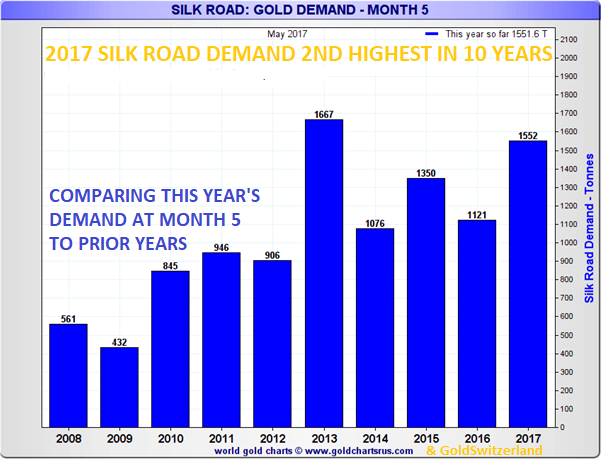 These charts and figures from the East clearly illustrate that the physical gold market is extremely strong with demand at a record levels. The weak gold price is an illusion based on a false and manipulated gold paper market. Like all false markets, it is only a matter of time before the truth will be revealed. And the truth will be very painful to anyone who holds paper gold or other paper assets.

Gold at currently $1,220 is a false price in a false market set by paper gold manipulators. At some point in the not too distant future, the gold price will be set in the physical market as no one will trust the paper market. The availability of physical gold is extremely limited at current prices. The rush to cover the shorts, combined with a massive increase in demand due to higher gold prices will create a virtuos gold price cycle. The result will be gold jumping $100s and even $1,000s in a very short period of time. Once this move starts, we are likely to see percentage rises which are much greater than we have seen in cryptocurrencies lately.

For anyone who doesn’t hold sufficient insurance in the form of gold, the current price is a real gift. And for the people who already own physical gold, they can sleep well knowing that they hold the ultimate wealth preservation asset that in the next few years will reach levels which are hard to imagine today.