by Egon von Greyerz January, 2014
“In November 1910, some powerful US bankers joined by the influential Paul Warburg had a meeting on Jekyll Island that would determine the destiny of the world financial system and the world economy for over 100 years. This infamous meeting led to the creation of the Federal Reserve System in the US on December 23, 1913.

The Fed was created by private bankers for the benefit of private bankers and today, 100 years later, they have been more successful than they could ever have imagined in 1913.

Not only have they created a system that efficiently controls the world financial system for their personal benefit but also world politics. They totally understood the advice of Mayer Amschel Rotschild, the founder of the Rothschild banking dynasty, who famously proclaimed:

“Give me control of the nation’s money and I care not who makes its laws.”

So for exactly 100 years now, the Fed and other central bankers have totally destroyed all major world currencies and left the world with debts that cannot and will not be repaid with normal money. And whilst achieving this unprecedented wealth creation for the top level of financiers, they have in the last 15 years also managed to enrich almost every single individual who works in Wall Street in New York or in the City in London. In 2008 the financial system almost collapsed had it not been for an injection of printed money, debt and guarantees by governments and central banks to the level of $25 trillion. Banks like Goldman Sachs, JP Morgan and Morgan Stanley would not have survived without this massive liquidity infusion. But even that year when these banks were on the verge of bankruptcy, most bankers received a similar bonus to the previous year.

At the same time, wages for ordinary people in the US, UK and many Western countries have hardly increased in real terms for decades. Normal people have a perceived increase in living standards due to a massive increase in personal debt as well as government debt – debts that they of course can never repay.

Now don’t get me wrong, I have nothing against bankers. I have a few in my family. But I know that the system which was created 100 years ago is untenable. It will not only lead to an implosion of the financial system and the value of assets financed by the credit bubbles. It will also lead to misery and famine for a lot of people in the world. And empty stomachs are likely to lead to social unrest in many countries.

A lot has been written about the centenary of the Fed in the last few weeks so rather than adding to this, I am showing a couple of graphs that tell the story very well.
The first chart (courtesy World Gold Council) shows the destruction of paper money since 1913. This is what the Fed and other central banks have achieved. All major currencies have declined between 97% and 99% including the dollar which is down 98% in real terms which of course is measured in gold.

The destruction of paper money 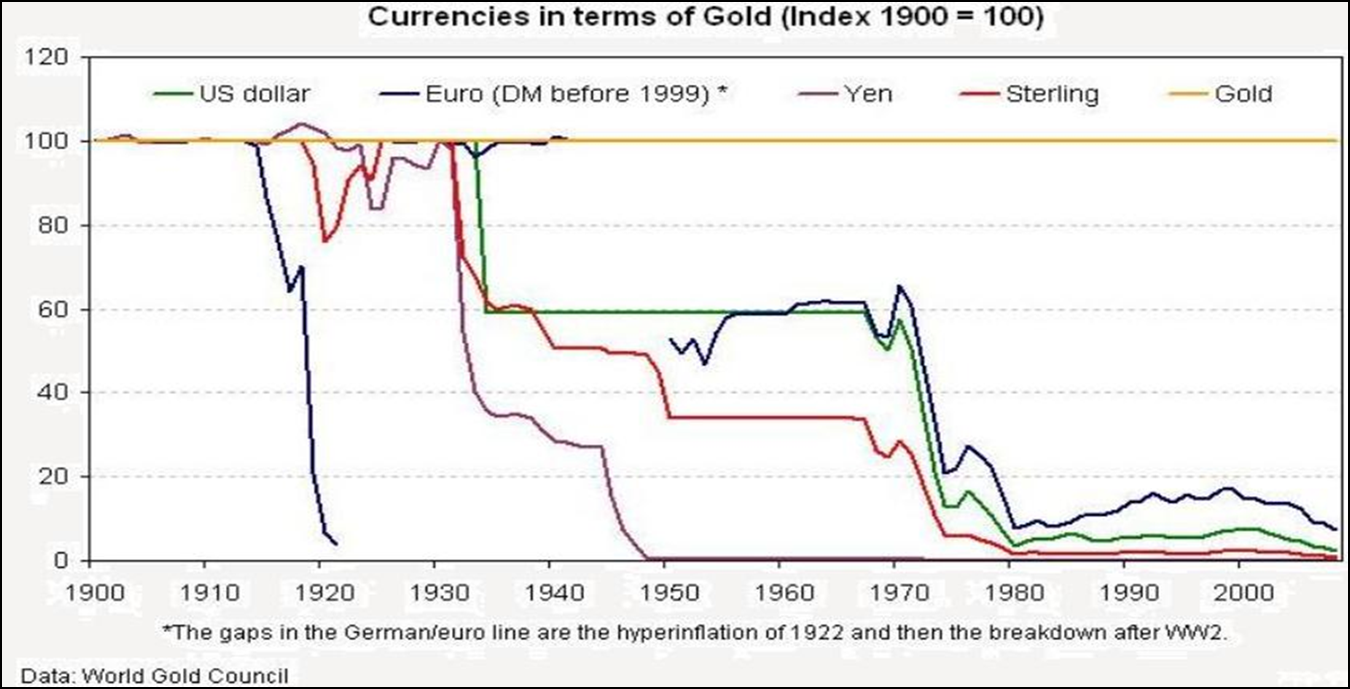 As we all know, gold is the only real money and cannot be destroyed. What is absolutely guaranteed is that many currencies and especially the dollar will go down the remaining 2-3% and reach their intrinsic value of ZERO in the next few years. The dollar does not deserve to be the world’s reserve currency and will soon lose that role. And gold will reflect this decline of the dollar and go to heights which are unthinkable today.

The Fed’s creation of boom and bust 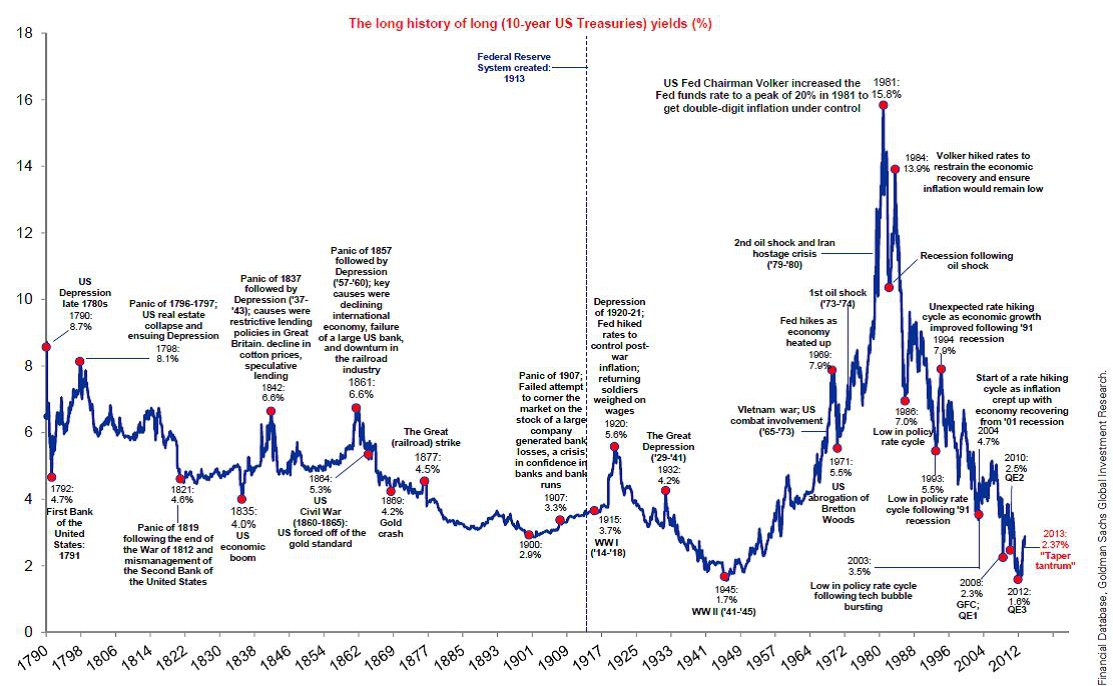 So as the chart shows, rather than eliminating booms and busts, the Fed actually creates them and makes the situation exponentially worse than it would have been in a free market without interference. I would expect rates to reach the 16% level at least in the next few years as investors dump worthless government bonds.

End of an era

The world is now at the end of an era that has lasted for many centuries. The last hundred years have been the culmination of a major cycle and the Fed together with other central banks have created the perfect crescendo with worldwide credit bubbles and asset bubbles which have led to the excesses and decadence which are the normal finale to end a secular trend.

The world financial system almost collapsed in 2008. With the help of $25 trillion in printed money, loans and guarantees the world got a temporary stay of execution. But none of the underlying problems were solved in 2008 and the risks are currently greater than ever. The world has never before been in a situation when most countries are bankrupt and with a financial system which is also insolvent. Japan is a basket case, China’s financial system is under massive pressure, Europe is a failed experiment in socialism and a common currency with Spain, Portugal, Italy, Greece and France all on the verge of collapse.

The UK is having a temporary bounce but is probably not far behind these countries. And the US is the most indebted nation in the world and is borrowing and printing money at an exponential rate

Ben Bernanke has been the most productive chairman of the Fed ever. During his reign US debt has gone from $ 8 trillion to $ 17 trillion. Remember that it took the US over 200 years to go from zero debt to $ 8 trillion. Bernanke managed to preside over US debt going up by $ 9 trillion to the in just 8 years. Not a mean feat! But not only that, Bernanke also printed over $ 3 trillion as the Fed balance sheet went from $ 800 billion to $ 4 trillion during his 8 years. So in total Bernanke has managed to create a total of $ 12 trillion during his rule which is a 133% increase in total debt including the Fed. These amounts can of course never be repaid in today’s money.

There are only two alternative outcomes, default or hyperinflation. Both will have disastrous consequences for the world economy.

In addition to the extremely precarious situation in the developed world we are now seeing a crisis in many Emerging Markets worldwide with falling currencies, bond markets and stock markets. This could easily lead to contagion. (see my King World News Interview on the EMs crisis:)

The Fed and other central banks have in the last hundred years created a time bomb and any single one of the crisis areas that I have outlined above could be the catalyst to make the world economy implode.
Some people have made incredible fortunes in the last century due to the central bank policies. But what the masses have achieved is perceived wealth built on exponential increases in personal and government debts. And sadly, one way or another the masses will pay for this for a very long time.

So the 100 years of the Fed is nothing to celebrate. It will in retrospect be seen as a lost century which destroyed the world economy for many generations to come.