Most people don’t understand the cause of hyperinflation. Many argue that we can’t get hyperinflation since asset prices are now under pressure and there is no demand led inflation as most people currently have very little money.

What few people understand is that hyperinflation is a currency driven event. It doesn’t arise as a result of prices going up. Instead hyperinflation comes from the value of the currency imploding. In every case of hyperinflation in history, it is the collapse of the currency that is the cause. So what leads to the currency collapsing. Well, exactly what is happening now around the world, namely unlimited money printing and credit creation. Led by the Fed and the ECB, the whole world is now extending trillions in loans, subsidies and guarantees to companies and individuals. Government deficits are now surging as tax revenues collapse and expenditures increase rapidly. So governments will also need to print money to finance their galloping deficits. The inevitable outcome will be bankruptcy although few nations will admit it.

US DEBT DOUBLES EVERY 8 YEARS

I produced the debt chart below the first time at the end of 2017 when Trump was elected president. I forecast then that US debt would reach $28 trillion by the end of 2021 and double by 2028 to $40 trillion. These kind of debt increases seemed incredible at the time. But very few people study history and learn from the past. 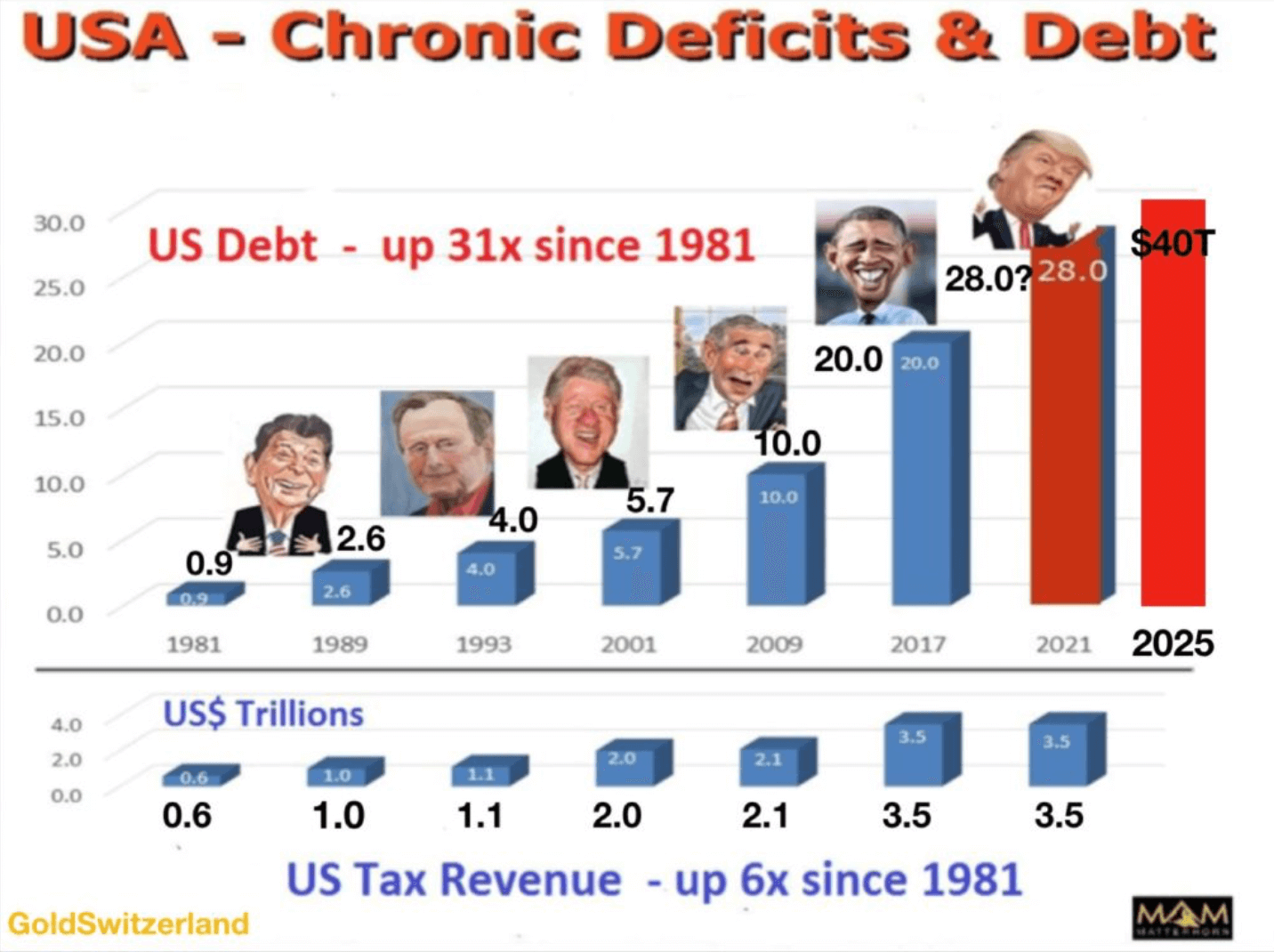 All we need to do is to go back to 1981 when Reagan became president. Since 1981 US Federal debt has on average doubled every 8 years, without fail. Obama doubled debt during his reign from $10 to $20 trillion. Thus, it was totally in line with history that the US debt would be $40 trillion 8 years later, in 2025.

Until a couple of months ago, it seemed totally impossible to reach these high debt levels.  But today it looks like we could exceed those figures by a big margin, especially the 2025 one of $40T. I am not surprised. Because when you make these forecasts you know that there are always unforeseen events that will occur to fulfil them. And the end of the biggest asset and debt bubble in history had to end with an unexpected event.

The bottom part of the graph above shows US tax revenue. It was $0.6T in 1981. Currently it is $3.4T. With the present situation in the US, it is likely that tax revenue will collapse, thus increasing the deficit further. But even at the current level of $3.4T, tax revenue has gone up less than 6X since 1981 whilst debt has gone up 31X.

As the banking system comes under pressure with debt defaults and imploding asset prices together with the $2Q derivatives going up in smoke, the US will be looking at an economic and social situation which is terrifying.

With falling tax revenues and galloping debt and deficit, the US is clearly on the way to default and bankruptcy.

SO WE ARE LOOKING AT THE FINANCES OF A BANKRUPT STATE. No additional printing of worthless dollars will remedy the situation. All it will lead to is a collapse of the dollar and an implosion of US debt. SO HYPERINFLATION HERE WE GO!

But the US won’t be alone, since sadly the EU (ED-European Disunion) and many other nations will encounter a similar destiny. A bankrupt world is the inevitable result of the irresponsible actions of central banks and governments in the last 100 years.

As Voltaire said already back in 1729:

The table below shows all the major currencies since the Fed was created in 1913. The straight line at 100 is Gold which represents stable purchasing power. In the last 100 years all major currencies have gone down 97-99% against gold.

ALL MAJOR CURRENCIES HAVE LOST 82-87% THIS CENTURY

If we look at more recent periods, the table below shows the currencies’ decline since 1971 and 2000. Since 1971 they are all down 98-99%, except for the Swiss franc and Yen, thanks to Nixon closing the gold window. 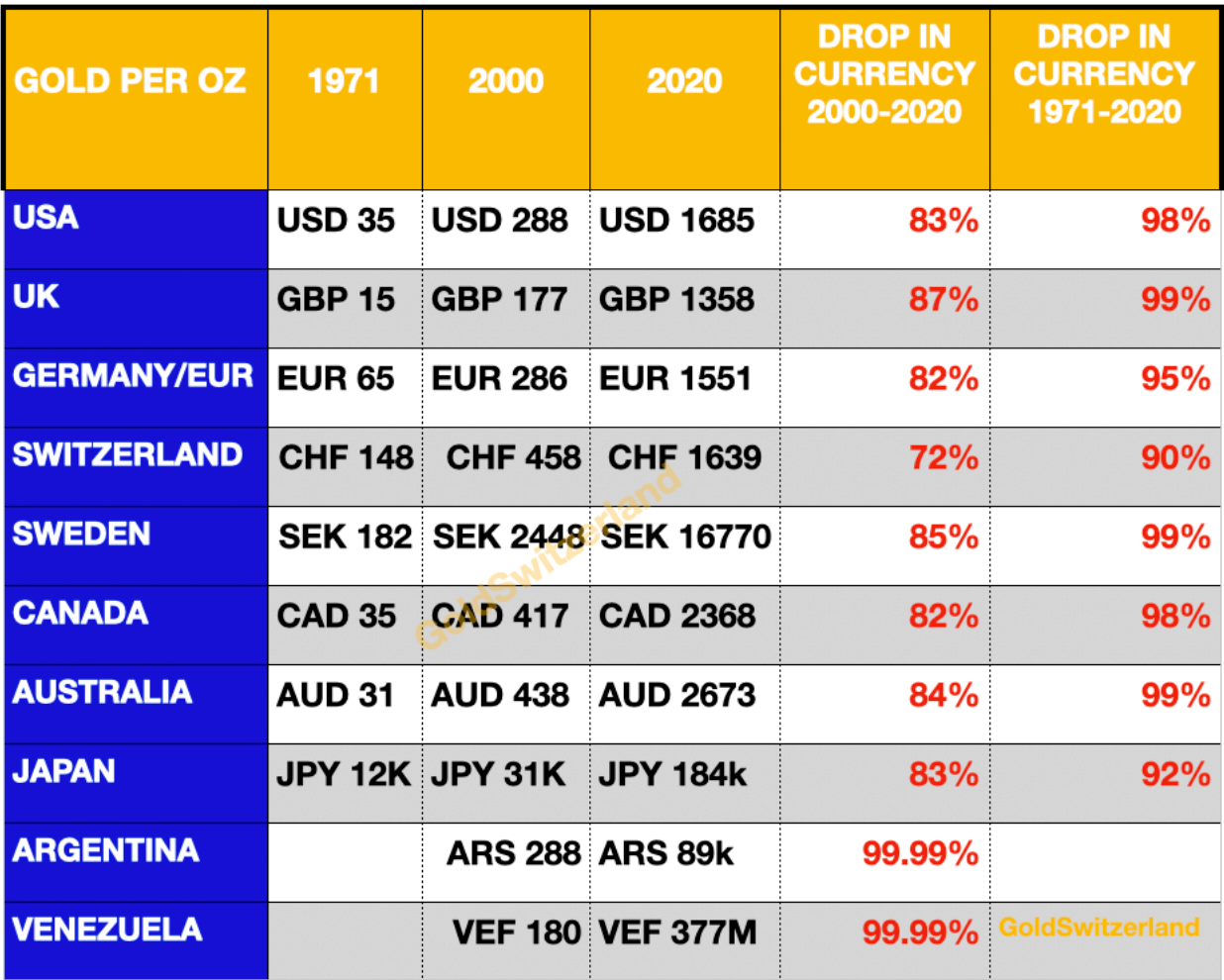 What few people realise is that since 2000 all the major currencies, except for the Swiss franc, are down 82-87%. This means that in real purchasing power, the currencies in industrialised countries have lost more than 4/5th of their value. So the final leg of the destruction of the current monetary system started 20 years ago. And from 2020 for the next 1-3 years, we will experience the final destruction down to Zero.

MOST CURRENCIES WILL LOSE 100% IN THE NEXT FEW YEARS

But what we must remember is that final fall to the bottom involves a 100% fall from today in the value of the Dollar, Euro, Yen etc. It was always clear that the current monetary system would end like all the others in history since no currency has ever survived in tact with the exception of gold. And the world’s central banks have now started the process that will lead to the demise of paper money as we know it today.

The facts and tables in this article are indisputable. The message couldn’t be clearer.

Still, most people don’t get gold, since less than 0.5% of world financial assets are invested in physical gold.

As I have outlined in many articles, stocks, bonds and property will lose 90-99% in real terms, against gold, in the next few years. Many bonds will lose 100%. And paper money will lose 100%.

LAST CHANCE TO SAVE YOUR WEALTH

Investors who don’t take immediate action are going to lose most of their investment assets. If you own property without debt, you can at least hold on to it but you will stop looking at it as an investment. But sadly most investors in conventional assets, like stocks and bonds, will be paralysed, hoping that Central Banks and Governments will save them yet one more time. But it won’t happen this time as more worthless debt cannot solve  a debt problem.  So I urge you to take action now.

Stocks will very soon start the next downleg in the secular downturn that started a few weeks ago. So there is a last little window to get out at what will seem like fantastic prices just a few months from here.

Gold has now started the acceleration phase and made new highs in most currencies except for in US dollars. The 2011 high of $1,920 will soon be reached on the way to much, much higher levels.

The three biggest gold refiners in the world in the Swiss canton of Ticino are now operating again but only at 1/4 of normal capacity. So there will be very little physical gold available. Our company can still get hold of gold but the tight supply situation will lead to prices going up rapidly and spreads widening.

Remember that you are not holding gold for illusory gains in worthless paper money. Instead, physical, and only physical, gold is life insurance against a collapsing world economy and monetary system.