“There is gonna be a new world order out there and we’ve gotta lead it!
And we gotta unite the rest of the world in doing it!”

That is what Biden proclaimed in a recent speech.

But since Biden has a tendency to get his speeches wrong, what he meant to say was:

“There is gonna be a new world DIS-order out there and we’ve gotta lead it!

Sadly, as the world has heard in many speeches by the US president, he hasn’t got a clue that his “empire” is collapsing around him.

But regrettably for Biden, the US isn’t an empire at all but a bankrupt nation without leadership. But even worse, the US has just in a final act of desperation not just shot itself in the foot but in the head.

Very few, if any, of today’s world leaders understand the consequences of their actions and clearly not Biden.

As the world is experiencing the end of an economic era, we are getting the leaders that we deserve and thus the appropriate ones to take the world to Armageddon.

So the world is now entering the final battle, a battle with totally incompetent heads of state which will lead to everyone losing.

The route to Armageddon will be disastrous for the world. Distressed leaders will take calamitous actions, exacerbating not only their own country’s problem, but also the rest of the world’s.

And that is exactly what we are seeing now with the worst possible concoction of debt deficits, currency debasement and decadence. The consequences were of course always predictable based on history. But no leader in the current era is a real student of history. And that is why the world is in such a mess.

HYPERINFLATION FOLLOWED BY A DEFLATIONARY DEPRESSION

I have in many articles outlined the course of events that I see from here – inflation, hyperinflation, debt collapse, asset collapse, leading to economic misery and eventually to a deflationary depression. “All Hell Will Break Loose for Humanity” as I wrote in a recent article.

There will be continued migration, but probably to a lesser extent since there will be no promised lands which will offer the migrants a better life. There will be isolationism and many countries will try to close their borders.

Sadly there will also be wars, cyber, civil and even major military wars. Mankind has never for any longer period stayed away from wars and especially not in periods of economic depression and high debts. Wars are such a wonderful excuse for poor leaders both to print more money and as a blame for the misery that the people suffer.

Western dominated media and propaganda are naturally blaming Putin for the war. And many leaders including Biden want him gone.

WARS HAVE BUILT THE WORLD

Wars are of course terrible whoever starts them but as I just said, the history of the world is very much based on wars and empire building whether we talk about Persian, Roman, Han, Mongol, Ottoman, Spanish, Russian, or British empires.
Many of these empires have been revered for what they achieved and still are today whilst some like the Mongol left very little positive traces for posterity.

The British Empire for example was remarkable. A small island created the biggest empire in history lasting for over 300 years and covering 26% of the world. The cultural and language influence is still significant.

Very few voices are heard today requiring that the kings or emperors of those eras to be convicted for war crimes posthumously.

The US never created an empire but unprovoked attacked countries like Vietnam, Iraq, Libya and Syria. Over 300,000 civilians have been killed in these wars led by the US.

Whilst virtually the whole Western world considers Putin to be a war criminal, we have not heard similar attacks on the US, UK or French leaders who were involved in the above recent wars.

Without intending to take sides, why should we have different rules or laws for different war criminals? There is clearly not a level playing field.

CORNERING A RUSSIAN BEAR HAS CONSEQUENCES

Coming back to consequences, any intelligent Western leader could have predicted Russia’s recent actions since the Maidan Revolution in Ukraine in 2014. This was when a US and Western led coup ousted the elected Ukrainian leader and government and installed a Western friendly leadership.

This coup, combined with new Nato members surrounding Russia, was such a clear threat to Russia that Putin’s reaction was obvious. Cornering a Russian bear is very dangerous.

A strong Western leader and Statesman would have foreseen this and taken up negotiations with Russia. But Western leaders totally ignored all the warnings from Putin and Russia and that is why the world is not just in a mess but in a situation that is geopolitically very dangerous.

Some observers argue that the current situation has been engineered by US Neocons in order to start a conflict/war with Russia.

The Roman Empire prospered for centuries due to free trade within and outside. But to sanction a country like Russia which has the world’s greatest natural resources to the extent of $75 trillion is total madness. Even worse when this sanctioned country supplies the energy of almost half of Europe, this is not just shooting yourself in the foot but in the head. See my article “A Global Monetary Inferno of Nuclear proportions”.

This will not just lead to energy and food shortages in the West but also a massive decline in world trade as well as GDP.

“Cutting off energy from Russia will spiral Germany into its most “catastrophic economic crisis going back to the end of WWII!”

But this should not come as a surprise for students of history. At the end of major economic cycles, countries get the abysmal leaders they deserve and these leaders will show a total lack of both intelligence and statesmanship. So sadly there is not even one leader who is capable of negotiating with Putin.

As a matter of fact, the US doesn’t seem to have a leader at all. And Germany’s new leader Scholz had hardly got his feet under the table before he was landed with the small problem that his country gets 55% of its natural gas from its enemy Russia. How inconvenient.
Germany clearly never learnt the expression “Don’t bite off the hand that feeds you”.

Both Britain’s Boris “Partygate” Johnson and France’s “Manu” Macron can count themselves lucky that the war took the attention away from their domestic problems.

THE US FINANCIAL EMPIRE ON THE ROAD TO PERDITION

The US used to be a financial empire but sadly now the country is on the road to perdition.

As I have pointed out many times, with the following abysmal figures the US can neither be an economic nor a moral leader of the world: 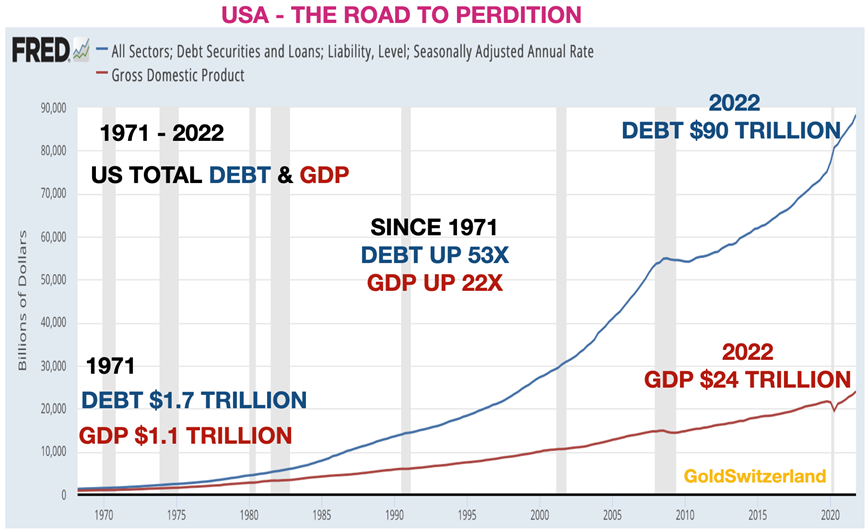 It is really astounding that the rest of the world accepts being dictated to by a country that is way past its sell-by date and can only generate false growth by printing endless amounts of worthless money. Before the 1970s the US had a strong economy with a respected currency. But since Nixon closed the gold window in 1971, the US has been on a slippery slope with debt exploding and the currency collapsing. 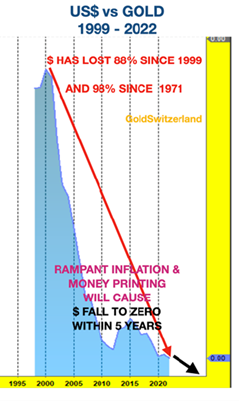 The fall to ZERO is guaranteed since all currencies, without exception, have become extinct throughout history.

But have we ever heard a central bank head or a president telling their people that the currency is going to become worthless due to their reckless actions?

No, of course not. Firstly they don’t understand or study history and secondly no elected politician can ever tell the truth because if they did, they would never be elected. 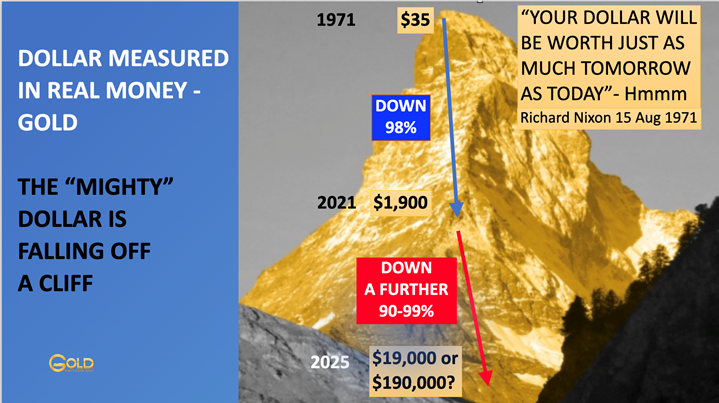 Clearly, Nixon had no understanding what happens to money when debt backs the currency rather than gold. Or did he just lie as he had the custom of doing?

Regardless, he orchestrated a dollar fall (off the Matterhorn as illustrated above) of 98% with the remaining couple of percent loss down to a 100% happening in the next few years.

Biden has with his current disastrous actions created the perfect climate for achieving the final 2% fall of the dollar. But remember that is a 100% fall from here.

By demonstrating to world central banks that the US can freeze any country’s foreign exchange reserves held outside their country, the world financial system and central bankers have learnt a lesson that will permanently change the way they do business.

No sane country will ever hold their reserves in US dollars or other currencies at a bank that the US government can directly or indirectly control.

Nor will countries trust the Swift system which the US can unilaterally manipulate.

The flight from the US dollar will not happen overnight but it will be more rapid than anyone can imagine.

No judicious central bank chief will ever consider handing their forex reserves to the US, a bankrupt nation, with a collapsing currency which at a whim can confiscate other countries’ reserves.

But not only that, who would ever put their money into US treasuries. Investors would not only lose their total investment on the falling value of the dollar but also on the US as a dodgy debtor which could easily default by debasing the currency to ZERO or extinguish the debt.

Russia saw this coming already some years ago and thus liquidated all their US treasuries. Instead they wisely bought gold.

US debt is now entering the Pass The Parcel Game with NO investor wanting to be left holding the parcel.

Consequences our US friends, Consequences! Do you now see that your government has not just shot yourself in the foot but has inflicted your country with a lethal head wound.

The collateral damage will clearly lead to a distrust not only in the US but in all governments and all currencies. Globalism is now turning into isolationism.

AND THE OBVIOUS CONSEQUENCE OF THAT WILL BE A FLIGHT TO COMMODITIES AND ESPECIALLY PHYSICAL GOLD AND SILVER HELD IN A VERY SAFE PLACE.