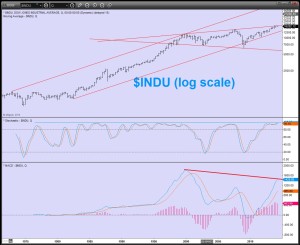 The US stockmarket continues its rise to dizzy heights. The rise has very little to do with economic fundamentals but is more a function of money printing and the weak dollar.

The US in now slowly entering its hyperinflationary phase. Food prices are already up 19% in the first three months of 2014. On an annualised basis that is 76% which is a clear sign that hyperinflation is already starting.

The dollar is likely to start a severe decline this year on its way to the intrinsic value of ZERO. As it falls the vicious spiral of a falling currency and massive money printing is likely to destroy the US economy in a hyperinflationary depression. This will not only happen in the US but also in Japan, the Eurozone and the UK. But the US will be the first country to experience the destruction of its currency.

At the beginning of a hyperinflationary cycle, the stockmarket virtually always makes substantial gains which is just reflecting the sheer weight of printed money. The Weimar Republic and Zimbabwe are two examples of this phenomenon. But after the initial enthusiasm the stockmarket loses its lustre and falls in tandem with the economy.

Gold will always reveal the destruction of paper money as the graph of the Dow/Gold ratio below shows. Since 1999 the Dow has fallen 72% in real terms or measured against Gold. The ratio made a bottom in 2011 when Gold was $1,900. 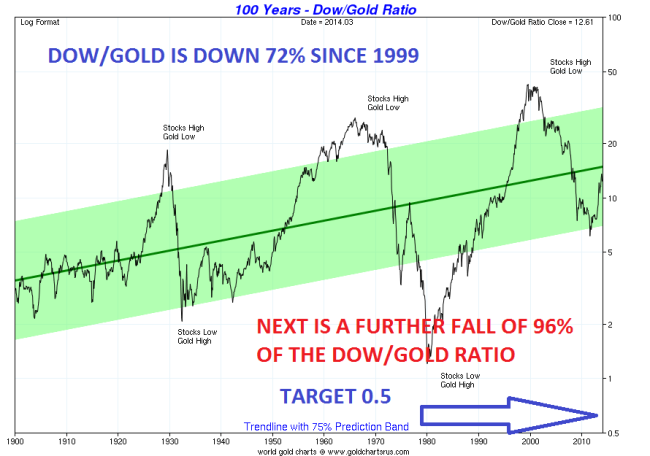 If we turn to Gold, we have been forecasting new highs before 2014 is over and we still believe that is likely. Thus the Dow/Gold ratio could soon turn down and start its journey to below 1 to possibly 0.5. In 1980 the ratio was 1 with gold and the Dow both around 850.
If the ratio overshoots, which is likely, and goes to 0.5 that would mean that the Dow would fall another 96% from here against gold.
Looking at the monthly chart of the Dow/Gold ratio it shows a dead cat bounce of 20% of the whole down move since 1999. Technically this correction now seems to be finishing with the momentum indicators showing bearish divergence on the monthly chart. In addition the Dow could form an important cycle top in April/May. 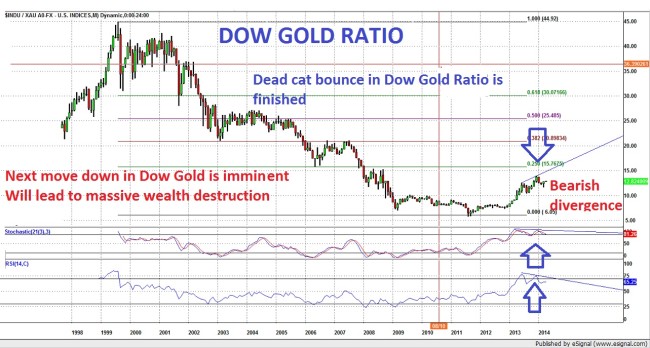 At what level would we find Gold and the Dow if the ratio hits 0.5? That would clearly depend on the amount of hyperinflation we will see. It could mean the Dow at 6,000 and Gold at $12,000. But if hyperinflation really takes off, we could see Gold at $50,000 and the Dow at 25,000.
But we mustn’t forget what happened in the Weimar republic when Gold went from 100 marks in 1918 to 100 trillion marks in 1923. In that scenario I would expect the ratio to be a lot lower because it would be unlikely to see the Dow at 50 trillion during a hyperinflationary depression. 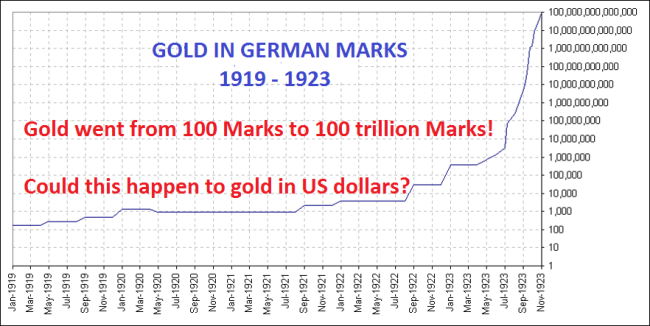 So the trade of the decade and possibly of the century is likely to be short the Dow and long Gold.

But Gold should of course not be seen as a trade but as the best and probably the only way to preserve wealth during the coming destruction of paper money and of wealth. Gold must of course be held in physical form. Also, it is absolutely critical to store Gold outside the banking system.

This article was first published on KWN on April 4.