Will the Coronavirus be the catalyst of not just a depression but also major reduction in global population? The growth in world population since the 1850s has been explosive. In the 1850s there were 1 billion people and today we are 7.8 billion. Although many “experts” have extrapolated the growth to 10 billion and more in coming decades, this has in my view not been based on sound reasoning. Instead, as I been writing about and discussed many times the spike in population that we have seen in the last 170 years will not end well.

Anyone who can read a chart knows that a spike on a major sample doesn’t continue straight up. And it doesn’t just correct sideways either. At some point, a spike up is always corrected by a major spike down. I talked about this in my article from April 2018. Below is an extract from this article:

The world has had many crises of various degrees in the past, be it the Black Death in the mid 1300s when an estimated 75 to 200 million people died in Europe and Asia. Around 50% of Europe’s population is estimated to have perished. In WWI around 20 million people died and in WWII around 60-80 million. So major catastrophes are part of history and the coming one could also see a major reduction in world population be it from economic crisis, famine, disease, social unrest or war.

From the mid 1800s to today world population has grown from 1 billion to 7.6 billion. If we look at the graph it is a straight spike up in the last 170 years. From a technical perspective, spikes up are always corrected by a spike down. We can’t tell when exactly that spike down will come but it is likely to be connected to the coming collapse of the financial system. A reduction in global population of 3-4 billion in the next few decades is a real possibility.

As I have stated in many recent articles, Coronavirus is not the reason for the downturn in the world economy that is now starting but the catalyst. I did not forecast that a pandemic would be the trigger. But in retrospect, the end of the biggest economic bubble in world history really had to come with an unexpected and unconventional catalyst.

A NEW MIRACLE PARADIGM OR A DISEASED SYSTEM?

That the world economy for the last 100 years was totally dependent on credit and printed money is not a new miracle paradigm but a the sign of diseased system. Issuing fake money at zero cost always had to end badly. In a perverse way it is almost ironic that the trigger for ending this sick financial system would be a pandemic disease. But this is Murphy’s law. If anything can go wrong, it will go wrong in the worst possible way and at the worst time.

As I said in my article above, “So major catastrophes are part of history and the coming one could also see a major reduction in world population be it from economic crisis, famine, disease, social unrest or war.”

Now the world is in a situation when all of those factors will probably come to pass. We already have the economic crisis and we have a disease. There is not a major famine yet but this is likely to come. Social unrest and war are probable consequences of these problems. Hungry and poor people will rise against their leaders and against the elite. The differences in income and wealth between the rich and the poor have created an untenable situation. This is virtually without exception how every revolution starts.

WHERE IS THE MONEY COMING FROM

Central banks around the world are of course doing their best to stop the world from going into poverty. They are now creating unlimited amounts of money in order to assist small and big businesses as well as individuals. Everybody is expecting a handout whether it is a major US business or an unemployed individual. It is of course wonderful that everyone gets help but no one asks where is the money coming from.

Nobody worries about that THERE IS NO MONEY. The $ 100s of billions and trillions that are being given to the needy don’t exist. They are just created out of thin air. Since the crisis started in the early autumn of 2019 with the Repos, the Fed’s balance sheet has gone up by almost $3 trillion to $6.5T. But this is just the beginning. The forecast is that it will reach $9T in June and probably $12T a couple of months later.

As I discussed in last week’s article the budget deficit will also get out of hand. In the current year the US could easily reach a deficit in excess of $4T, taking the debt to $28T. If we just go back 3 months, who would have believed a Fed balance sheet reaching $12T and a US debt of $28T? These would have been seen like preposterous fantasy figures. The problem with most forecasters and economists is that all they understand is just to extend the current trend. But they don’t even do that because if they had, they would have realised that US debt has doubled every 8 years since 1981.

So the US is likely to have a debt of $40T in 2025 but that figure is most probably much too low. Because next we are going to see failures not just in the economy but also in the financial system. At that point, the current rescue packages of $2-5T will be dwarfed by bank rescues of $10s to $100s of trillions. And when finally the derivative bubble bursts we could be into the $quadrillions. Again, most people will today consider these figures as sensational scaremongering. But that is the risk the financial system is now facing and we are now in a phase when the surprises will be much worse than anyone can imagine.

NOTHING WILL BE THE SAME

For decades the world has been in an Alice in Wonderland fantasy phase. It all started with private bankers taking control of the financial system in 1913 when they founded the Fed for their own benefit. For almost 60 years their power grew gradually but then in 1971 when Nixon closed the gold window, all hell broke lose. Money printing and credit expansion have grown exponentially since that time.

The US already started what is now 60 years of deficit spending. Every single year since 1960, the US has a deficit. The Clinton surpluses in the late 1990s were all fake since debt continued to increase. Just imagine that the mighty US has lived on a lie for more than half a century. The economic miracle is not a miracle at all but just printed wealth.

Since the main aim of politicians is to buy votes, Nixon had no choice back in 1971. The US had already at that point been running a deficit for 10 years. With a gold standard, it is necessary to run an honest financial system without deficits. Otherwise you lose all your gold and the currency collapses. Since Nixon had no intention to run surpluses, he could not be tied by a gold standard and therefore abolished the gold backing of the dollar. The consequences were of course disastrous and the dollar has fallen ever since.

The chart below shows the not so mighty dollar against the Swiss franc since 1971. The dollar has so far lost 78%. The technical target tells us that the dollar will come down another 50% against the Swissy. But we shouldn’t measure currencies against each other since they will all go down to their intrinsic value of ZERO. 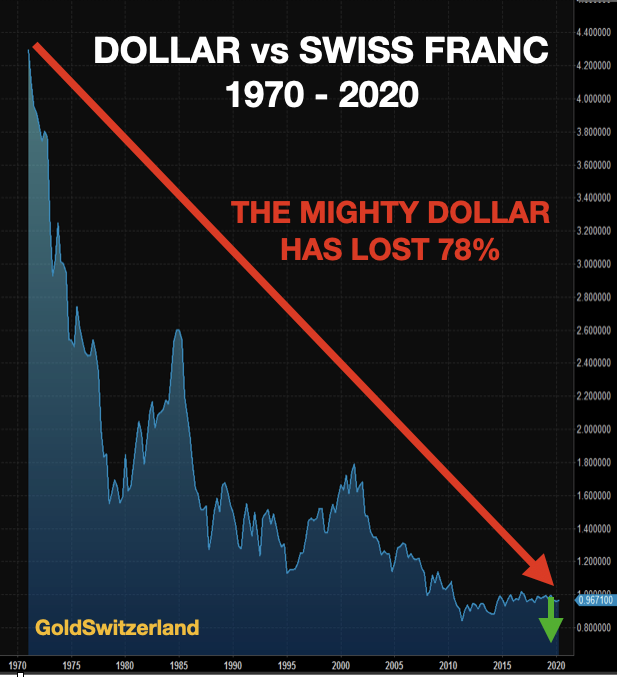 Instead, if we measure the dollar against gold it is already down 98% since Nixon’s fatal decision. The remaining 2% fall to Zero is likely to happen in the next 1-4 years. But we must remember that this involves a 100% fall from today of most currencies against gold.

Since the US started running deficits in 60 years ago, total US debt has gone from $800 billion to $76 trillion today. What we are seeing is a fantasy world all built on debt, federal, state, consumer, mortgage, auto, student etc. The list is endless how to create fake wealth just based on debt.

But the US is now coming back out of the Rabbit Hole and back to reality which will be the biggest shock in history. The Coronavirus was the perfect catalyst albeit horrible. The trillions of fake money and fake assets will now implode and so will the US economy. The rest of the world will sadly follow.

What the world has experienced in the last 100 years is not real capitalism. It more resembles Voodoo capitalism. Central bankers, led by the Fed, have successfully adopted Mayer Amschel Rothschild’s philosophy: “Permit me to issue and control the money of a nation, and I care not who makes its laws.” 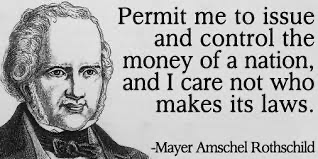 By doing this, they have put a spell on the global financial system and lumbering it with debt that could never be repaid. The beauty of having done this from the bankers point of view is that they are the only ones who can lift the spell. First they are instrumental in creating a debt infested world economy and then they are the only ones who can come to the rescue and “save” it. And in both instances they benefit greatly.

The problem is that the cure will be even worse than the original action. A best burdened world can never be saved by more debt. But this is the only remedy the central bankers know. So next we will see unlimited money printing that crushes currencies and leads to a depressionary hyperinflation.

In real terms all bubble assets will now crash. Real terms means in stable purchasing power and measured against gold. So we will see stocks, bonds and property decline by 90-100% against gold. In nominal terms, stocks might go up initially with hyperinflation. But that will only be illusory gains.

Stocks around the world fell initially by around 40% and have now recovered half of that fall as stock investors have been buying the dips in the hope that central banks will save them yet another time. But they will soon have their next shock. Markets could start their next leg down already in the coming week. Or it could take 2-3 weeks. What is clear is that a secular bear market has started which has a very long way to go.

For 20 years I have talked about the importance of wealth preservation in the form of physical gold. During that time gold is up 6-7 times depending on which currency you measure it in. But still, less than 0.5% of world financial assets are in gold.

Gold is still incredibly undervalued in relation to the growth of global money supply. It is still possible to get gold, but the physical market is under real pressure. The three largest refiners in the world, based in Ticino Switzerland, are now working at 30-40% capacity. So major shortages are developing. Spreads are now much higher but the price for wholesale gold is still governed by the paper market.

This is a ridiculous situation that will not last long. Both the Comex and the LBMA are under enormous pressure which soon will lead to massive delivery problems and a major price squeeze. So the window of opportunity to acquire physical gold at current prices will soon close.

Remember that gold is real physical wealth as well as insurance against a financial system that is unlikely to survive. Gold can still be bought with overvalued fiat money at prices substantially below its real value but not for much longer.