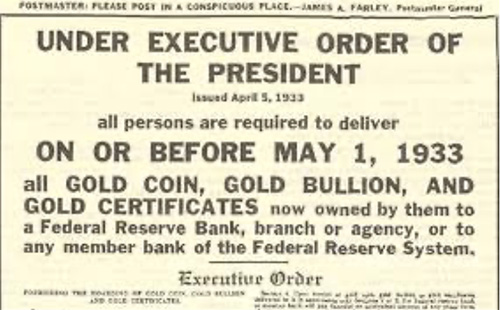 Will gold be confiscated? Yes, of course, it could be. Desperate governments will take desperate actions. And as the world economy is now slumping into a hyperinflationary depression, unlimited money printing will cause currencies to collapse, leading to a surge in the gold price measured in worthless paper money.

So the first question we must ask is: Why would governments punish prudent savers who have taken protection in gold against the irresponsible mismanagement of the economy and the currency?

With investment gold representing only 0.5% of global assets whilst stocks are 24%, you can ask why the US government, are doing all they can do drive up the value of stocks by printing money and at the same time suppressing the price of gold. Why are shareholders supported to become rich whilst gold holders are penalised?

Governments are clearly supporting ever higher stock since this buys votes. But with so few investors holding gold, the government will lose very few votes by manipulating the gold price down.

WILL THE US CONFISCATE GOLD

Since we are now entering a period of major currency debasement and potential hyperinflation, you could ask why governments would stop investors from preserving wealth in the form of gold. So would the US government, instead of encouraging thrift and prudent wealth preservation in the form of gold, confiscate the savings of the Americans? Well, some observers like Jim Sinclair – “Mr. Gold” – thinks this is possible also for US gold mines. He does believe though that coins of the Realm like Eagles would be excluded.

But the confiscation by Roosevelt in 1933 was a totally different situation and not comparable with today. At that time, the US was in a depression and the dollar was tied to gold. The economy was under pressure and the US government decided that the dollar needed to be devalued. A dollar devaluation automatically meant a revaluation of gold since the two were totally interlinked. But FDR decided that the US holders of gold should not get the benefit of a revaluation. Thus gold was confiscated and then revalued from $20.67 per ounce to $35. Gold in bank safe deposit boxes was taken but many Americans hid their gold at home. Gold held outside the US was not confiscated.

AMERICANS HOLD GOLD IN MANY COUNTRIES

Today gold ownership is global. US investors for example are legally storing gold in many countries – Canada, Singapore, Australia, UK, and Switzerland to mention a few. Substantial  amounts of gold are stored by US citizens in these countries. Switzerland is a major gold hub where gold is stored in the big banks as well as in many private banks. In addition, there are many private vaults outside the banking system in Switzerland storing considerable amounts of gold.

It would be totally impractical to require Americans to ship the gold back to the US. Also, many countries would not cooperate. I have heard people criticising Switzerland for giving in to the US authorities and revealing the names of Americans who held undeclared accounts in Switzerland at UBS and other banks. As a Swiss I also consider that the Swiss government should not have succumbed as they did this in contravention of the Swiss constitution. Banking secrecy was holy and law in Switzerland at the time. But there was pressure from many European countries also that the Swiss were complicit in tax fraud. In Switzerland, not declaring funds or income was not a criminal event.

TODAY THERE IS AUTOMATIC EXCHANGE OF ALL FINANCIAL INFORMATION

So Switzerland gave in at the time and the banks had to open up their books. And today all banks in the world exchange information based on the OECD Common Reporting Standard. This is an Automatic Exchange Of Information (AEOI) between virtually all countries. Gold held within the financial system is included in this reporting.

The reason Switzerland gave in was the enormous pressure the US authorities put on them, which supposedly included freezing all the assets of the UBS US branch. But also morally the Swiss government had to give in since it was hard to justify actions that were allowed in Switzerland but fraudulent in the US and most other countries.

Gold or other precious metals held in private vaults is at the present not reportable by Americans in their tax returns. The same goes for property. But based on the strict compliance and AML (Anti Money Laundering) regulation, no serious company involved in precious metal storage would accept undeclared funds or metals. Thus no respectable company dealing with gold would accept client funds or gold which are not tax compliant in the country of the client.

So today, gold or other precious metals held in Switzerland by Americans are totally tax compliant. For that reason, I doubt that the Swiss government would cooperate with the US tax authorities if they required the gold to be returned.

GOLD IS A STRATEGIC INDUSTRY IN SWITZERLAND

Gold confiscation in Switzerland is very unlikely. Refining and storing gold in Switzerland is a strategic industry. Switzerland refines 70% of the gold bars in the world. This makes our country a very important party in the global gold industry that could not be replaced elsewhere. In addition, gold is 29% of Swiss exports which is very significant. Also, Switzerland stores a major part of the private gold in the world.

Saving in gold as well as giving gold to children or as a wedding present is a long-standing Swiss tradition. The Swiss will normally buy the Swiss Vreneli coin.

The gold stored in Swiss private vaults is growing significantly every year. The stable political system, rule of law, being a very old democracy and neutrality all contribute to this. Gold confiscation would also be against the constitution. A senior Swiss politician friend of mine told me that if the Swiss government confiscated gold, the people would revolt. For these reasons, I believe that Switzerland will become an even more important gold hub and the best place in the world to store gold. 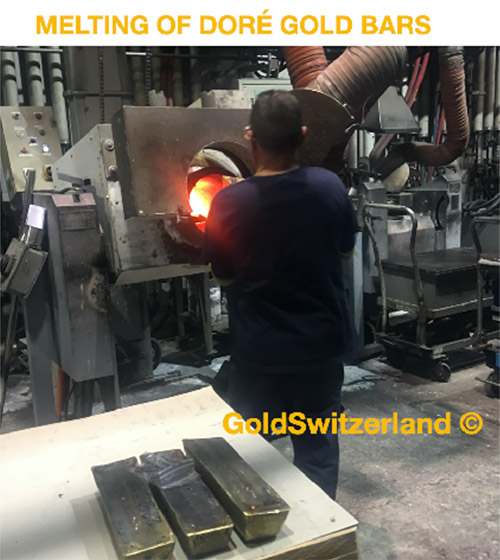 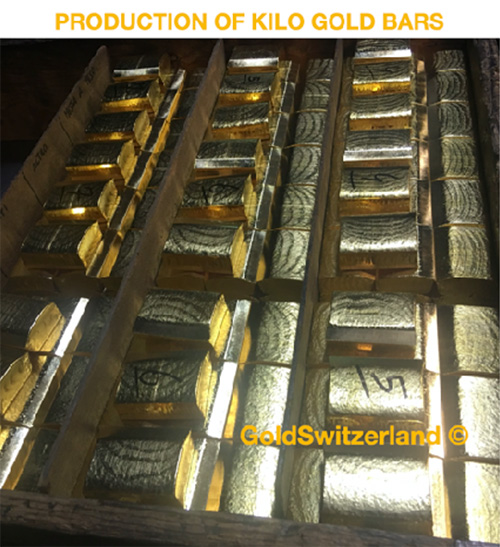 The US declares holding 8,000 tonnes of gold. This gold has not had an official physical audit since Eisenhower’s days in the mid 1950s. There is clearly a reason for a country not properly auditing their stated $450 billion gold holding. Almost all countries are in the same position. Nobody has an official physical audit of their gold. Since they are all declaring how much gold they hold, they clearly have a responsibility to their people to publicly audit their alleged gold holding.

The answer is simple of course. They don’t have the gold they say that they hold. That can be the only reason why it is never audited. In my view many central banks, including the Fed have covertly reduced their official gold holding. In addition, all central banks are lending or leasing a major part of their gold and most probably also lending the same gold many times over. We know for example that HSBC and JP Morgan hold a major amount of central bank gold. They are also custodian for the biggest gold ETF – GLD. When the gold holdings by GLD increases, there is no gold bought from the Swiss refiners. Instead, the custodians just lend them the central bank gold they hold which has probably been lent many times over.

CENTRAL BANK AND BULLION BANK GOLD IS LOST TO THE EAST

In the past when central banks leased out gold, it would stay with the bullion banks in  London or New York. Today, the big buyers are China and India. They buy gold from the bullion banks in London or New York. These 400 oz bars are shipped to Switzerland to be broken down into kilo bars by the Swiss refiners. The kilo bars are the desired size both in India and China. These bars are then shipped on to the East. The bullion banks lease the 400 oz bars from a central bank and then sells them on the buyers in the East.

Jim Sinclair and Bill Holter, two of the most respected individuals in the gold industry, have calculated the real value of the US gold based on 8,000 tonnes allegedly held by the US and balancing the balance sheet of the US. The projected value is $50,000 to $87,000. And as Jim says, that assumes the US holds 8,000 tonnes. Let’s say that the US only holds 4,000t, then the gold price would be double these estimates. And assume that virtually all the US gold has been sold or leased, that would be a gold price going to infinity.  But 4,000t or slightly less seems more realistic.

China has been accumulating gold for decades. Their official holdings are 2,000 tonnes. But it is widely assumed that their real holding is over 10x that. Insiders who have been working with the Chinese confirm that they are likely to hold over 20,000t. All the domestic Chinese gold production, currently 400t p.a. goes to the government.

When China announces a gold-backed yuan, which is not unlikely, they will declare their 20,000+ tonnes and then challenge the US to prove they have the 8,000t. This will lead to some interesting exchanges of aggression, hopefully only verbal. 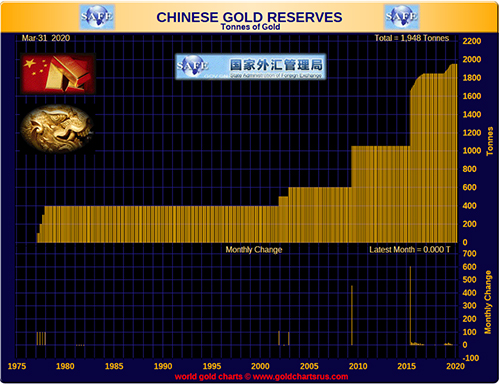 As I said initially, it is possible that some governments attempt to confiscate gold. But in my view, it is an extremely difficult exercise to both legally and logistically conduct. Also, if the gold is held abroad many countries will resist or refuse to ship gold to the US.

Also, the gold market is today global. In China, 1.4 billion people are encouraged by the state to own gold. In India, it is a tradition for most families to hold gold and to give gold as wedding presents. And in Russia, gold reserves have gone from 400 tonnes in 2006 to 2,300 today, a fourfold increase. These countries understand the vital importance of gold.

In today’s global markets, it would be almost impossible to stop companies or individuals to trade gold outside the US or Europe in Shanghai, Singapore or Zurich.

With the epicentre of the gold market moving to China and the East, it is very unlikely for the US and the West to confiscate gold. This would precipitate the fall of the dollar and the Euro and substantially weaken the US and EU positions and their economies.

“HE WHO HOLDS THE GOLD MAKES THE RULES”

Thus I believe that confiscation is very unlikely. Governments have a much simpler way of getting at the assets of the wealthy through high taxation. And this is what I believe will happen and not just for gold. As government deficits surge, all assets of the rich will be taxed heavily and not just gold which today represents only 0.5% of global financial assets.

Therefore, tax planning including various jurisdictions is as important as wealth planning.

Stock markets are in the course of finishing a correction up. It could take another week or two. Once finished, we will see rapid falls across the globe to new lows.

The precious metals are in a strong uptrend. The 2011 high for gold in dollars will soon be reached. All other currencies have surpassed the 2011-12 high in gold in the last two years and so will gold in dollars. Remember that corrections are always part of a sound uptrend.

It is totally irrelevant what price gold reaches in worthless paper money whether it is Sinclair’s $58,000 or my 18-year-old prediction of $10,000 in today’s money. Time will tell.

But it is critical to hold physical gold as protection against a currency system and a financial system which are in the process of falling apart.