Viktor set out his investment strategy early in life. He started with $10,000 in 1970 and his assets are today worth $121 million. But Viktor believes that this is just the beginning. He expects to reach $1 billion within the next 5-10 years.

Viktor had learnt that planning and goal setting are the most powerful tools when it comes to achieving results. This was proven by the Harvard study on goal setting where the 3% who had specific written plans for their future earned 10x more than the ones who had no plans. 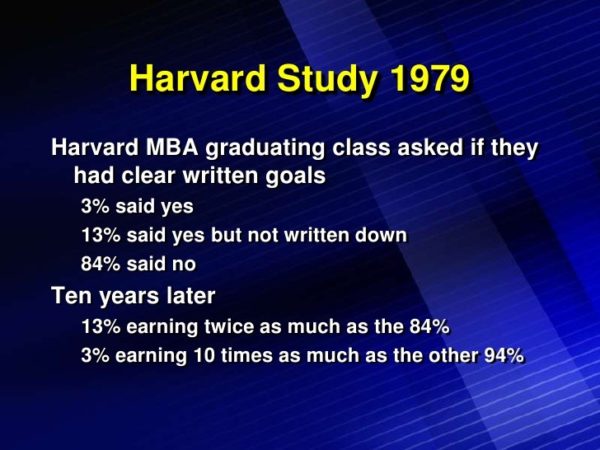 Viktor understood the significance of cycles and long trends. He was also totally clear that real fortunes in investment markets are created by riding long trends. Viktor enjoyed life. He liked reading and he liked travelling to interesting continents and places. He also liked investment markets but did not want to spend all his life studying detailed daily financial analysis of companies and markets.

Viktor’s first criterion was to only make one investment decision every ten years. He would buy an asset class which was unloved and undervalued but which had substantial potential based on his cycle analysis as well as his macro analysis of the global economy.

He had finished his studies at the end of the 1960s and decided that he would make his first investment at the beginning of January 1970. He chose gold to be his first 10 year holding. Gold had been fixed at $35 since 1933. In the meantime global debt had been growing and the US’s debt was increasing fast due to the Vietnam war. With mounting US debts, Viktor questioned the US ability to hold gold at $35.

Viktor had received a $10,000 inheritance which he bought gold for at $35 per ounce. Since this was a 10 year investment, Viktor decided that his stop loss would need to be a generous 33%.

The positive surprise came earlier than even Viktor could have hoped for when Nixon closed the gold window on August 15th, 1971. Gradually gold appreciated in the 1970s but with major corrections. Still, by early January 1980 gold was $559. So based on his plan, Viktor exited gold at that time to enter a new 10 year investment. With the benefit of hindsight Viktor could have made a lot more since gold went to $850 by the end of January 1980.

Viktor spent some time studying Japan at the end of the 1970s. Japan was now industrialising fast and had started to produce goods like electronics and cars which were in demand globally. And the Nikkei, the Japanese stock market, was at that point unloved and undervalued which was the perfect position to invest.

So Viktor took his winnings of $159,700 and put it all into the Nikkei index. Viktor had a very tax efficient structure so his gains could be invested tax free. The Japanese economy grew rapidly in the 1980s and the stock market virtually exploded. Viktor’s $159,700 grew almost 6X in 10 years to $950,000. So in 20 years, his $10,000 had gone up almost 100X. Obviously Viktor was pleased that his very simple investment plan was working out so well.

This time Viktor was very lucky with his exit since when he sold the Nikkei in early January, when the price was 38,700, which was very near the all time high.

Viktor always had an interest in Tech and after in depth studies decided that this was going to be the next major growth area. So he put his $950,000 into the Nasdaq Composite in January 1990. This turned out to be a spectacular investment. Based on his rules, Viktor exited the Nasdaq investment in January 2000 not far from the top and just before an 80% crash.

The gain on the Nasdaq had been a spectacular 9X and Viktor’s equity had now grown to $8.5 million. In 30 years, Viktor had multiplied his initial $10,000 an impressive 850X.

Viktor was obviously pleased that when he sold his three first investments of Gold, Nikkei and Nasdaq, the 10 year exit point was very near the top in all these three markets. So his cycle theory was clearly working very well.

Having already made a very good return in gold, Viktor decided to return to the yellow metal which had spent 20 years correcting the strong move up in the 1970s to the 1980 peak of $850. So Viktor decided that gold had again reached the point when it was unloved and undervalued and he bought gold at $288, investing his $8.5 million capital. Due to the massive money printing and credit expansion gold increased rapidly in price during the 2000s and in January 2010 Viktor exited gold at $1,096. He obviously didn’t know at the time that gold would climb to $1,920 by September 2011. But this was anyway irrelevant since Viktor followed his investment plan religiously.

The latest gold investment had increased the value of Viktor’s assets 3.8X. This was in effect the lowest return in the four 10 year periods that he had invested. But in any case, his capital had now grown to a healthy $32 million. Not bad on a $10,000 investment.

Viktor is still in the Nasdaq since this 10 year investment cycle ends in early January 2020. As of end of November 2019, his Nasdaq investment has increased 3.7X. His $10,000 is today after 40 years worth a healthy $121 million. Thus so far Viktor has achieved a compound annual return of 26.5% and a total return of 1.21 million percent. This is totally remarkable for having made just one investment decision every ten years.

Over a 40 year period, Viktor invested twice in Gold, once in the Nikkei and twice in the Nasdaq. Clearly very few investors will have the skill and luck of Viktor. He never tried to time his investments but followed his plan of entering and exiting in early January every 10 years. But what investors can learn from this is the opposite of conventional wisdom. Most people buy high when an investment reaches the front pages. Very few follow Viktor’s principle of buying when an investment is low, undervalued and unloved.

We see the same in gold also. Most of the buying is done when the price is going up. We have many times shown graphs of how undervalued gold is today but sadly for most people that is seldom the main criterion for buying. The psychology of the price going up is such a major temptation and much more enticing than a low price.

Viktor’s style of investment proves that buying an asset which is undervalued but has a substantial intrinsic value improves your risk/reward dramatically. Also, since Viktor’s strategy included holding the investment for 10 years, the long term prospect of his holding was clearly of utmost importance. Therefore Viktor spent a significant time around the end of each 10 year period to analyse the macro economy, markets and investments.

ALFRED – A BUY AND HOLD INVESTOR

Viktor’s method is very different to Alfred’s whom I wrote about earlier this year. Like Viktor, Alfred was born at the end of WWII and received his first shares from his grandparents. He then invested all his savings during his working life into Dow stocks and today has a fortune of $14 million. He never timed the market and he never sold anything even during the worst corrections. But investing in a growing economy, fuelled by massive money printing and credit expansion meant that Alfred never had to worry. The Government and the Central Bank looked after him well by always expanding the money supply and thus pushing stocks to higher highs, even after big setbacks.

Alfred is obviously very happy with always being in the market. He is totally unaware of what is coming. The biggest economic bubble in history is about to burst and Alfred will probably lose at least 95% of his wealth in real terms in the next 5 years. It might sound dramatic to forecast a 95% loss but we must be aware that in 1929-32 the Dow lost 90% under economic conditions which were nowhere near as dire as today. So Alfred’s 74 year investment success is about to be totally wiped out in the next few years. But Alfred along with virtually all stock market investors will hold on to his portfolio in the belief that stocks will recover again like they have in the last 3/4 of a century. Alfred doesn’t realise that we are now at the end of a secular bull market and that this time any attempt by central banks will have zero effect.

With this coming implosion of stock and debt markets, additional massive money printing will initially have a positive effect on markets but that will be short lived as investors realise that adding worthless money to worthless debt still equals zero. Also, this time around there is no margin for lowering rates since they are already zero or negative in most countries.

INTEREST RATES WILL REACH THE TEENS

Even worse, when investors start dumping the long end of the bond market, long interest will go up rapidly and also pull short rates up. At that point central banks will totally lose control of rates, leading to a total panic in credit markets. No country can afford 1 to 2 percent increase in rates but the collapse of credit markets will lead to rates quickly going into the teens like in the 1970s.

That will set off a vicious circle of higher rates, more money printing, more inflation and still higher rates and more money printing leading to hyperinflation. This will last for around 2-4 years and will end with a deflationary implosion of most assets. Few banks will survive this phase, especially as the $1.5 quadrillion derivative market implodes.

So what will Viktor do at the end of 2019 when he reaches the end of another 10 year investment period. Well, for Viktor the answer is obvious. He is certain that the world will see the biggest money printing bonanza in history and this on a global scale.

Viktor also knows that gold is as cheap today as it was in 1970 when he first bought gold at $35 and in 2000 when he bought gold the second time at $288. The chart below shows the price of gold adjusted for US money supply and confirms Viktor’s conviction. 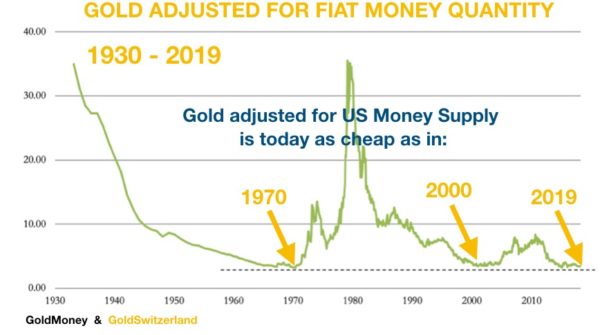 So Viktor is totally convinced that gold is the only asset that he wants to hold in the next decade. In order to reach a total worth of his portfolio of $1 billion, gold would only need to go up 8.3 times from today to $12,000. But for the real measurement, Viktor must wait to see where the prices of the Nasdaq and Gold will be on January 2nd. 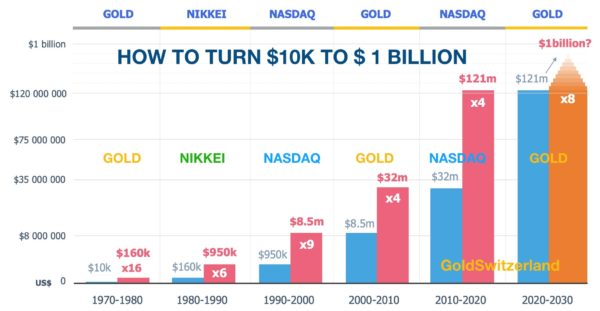 VIKTOR WILL BE THE VICTOR AND ALFRED THE LOSER

If we assume the Nasdaq and gold prices are the same on January 2nd as today, it would mean that gold must reach $12,000 for Viktor’s account to reach $ 1billion. With the problems Viktor sees in the world economy, he considers $12,000 in today’s money to be easily achievable and that much higher levels are likely.

If gold reaches $12,000 by say 2025, Viktor’s wealth will during a 55 year investment period have gone from $10,000 to $1 billion which is a return of 10 million percent. Quite remarkable for just taking 6 investment decisions during his 50 year life as an adult.

But sadly for Alfred, the buy and hold strategy will in the next few years prove disastrous and he stands to lose 98% of his wealth in real terms which means measured in gold.

So this is the decision that investors have to make right now. Either stick with stocks that are likely to start crashing in 2020 and wipe out your wealth totally or hold physical gold and preserve as well as enhance your wealth.

Quite an easy decision really but sadly 99% of investors will follow the road that leads to ruin.