By GoldSwitzerland
January 31, 2012
With Central Bank balance sheets exploding and no solution to the EU problems or the US deficits, unlimited money printing will accelerate. 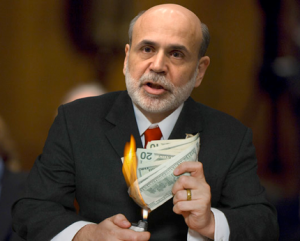 “It’s not just the ECB balance sheet that’s gone up in the last six months or even the last three months by hundreds of billions of dollars. It’s the same with the Fed, Bank of Japan, The Bank of England and the Swiss National Bank, they are all exploding. This can lead to only one thing and the market seems to be totally ignorant of this.

The repercussions are going to come very soon. As I said, this can only lead to one thing, an explosion higher in gold and silver prices and the beginning of the massive inflation, which will lead to hyperinflation.”

When asked about the Fed announcement last week, von Greyerz replied, “The Fed action is totally consistent with what we’ve said for some time. The Fed knows they have to continue to print money and they will print unlimited amounts of money. On top of this, the US is not taking any measures whatsoever to cut down on spending.

“Every year the Fed is printing between $1.5 trillion and $2 trillion. As you know, just during President Obama’s term the debt in the US has gone up by about $4.5 trillion. This is about 30% of total borrowing in the US. It’s just incredible and it’s accelerating.

But they are not the only central bank doing this. The ECB is in the same mess. The ECB is meeting again, but I would be surprised if they come to any decision. Greece will probably default because they won’t accept the EU having control over their finances. The EU doesn’t want Greece to default because it would be bad for the other European countries, so they will probably come up with a package. I don’t expect that package will be now, but at some point in the future.”

When asked about the action in gold and silver, von Greyerz responded, “The move in gold, so far, looks extremely good. I’m always pleased that we don’t have a straight move up, although I do think we will have faster moves higher in the not too distant future. This is strong action with small corrections.

We are at $1,730 today and I think within the next couple of months we will certainly be touching $1,900 and continuing higher from there. I don’t think $1,900 will be a stopping point for very long.

I really like the action of silver. Silver still hasn’t broken out like gold has, but as I said to you last time, I expect that to happen soon. It will break out around the $37 level. That’s going to happen very quickly because the gold/silver ratio is moving down nicely, but I think it will soon accelerate lower and silver will move a lot faster to the upside than gold.

So I can see $37 being taken out within the next 30 days and then we will just start flying from there. It won’t take long to get up to $50 again.”

When asked about the mining shares, von Greyerz stated, “I like them here. We’ve started buying them. We prefer physical bullion, but we’ve now started buying mining shares because they are massively undervalued and they will move a lot faster than the metals.

As I said, I like them now and I think it’s the right time for investors to buy them or add to positions because I think an acceleration higher in the mining shares is coming.”