By GoldSwitzerland
February 1, 2012
Alf Field predicts $ 158 as the next target for silver

Alf Field, my good friend and Elliott Wave Expert par excellence, has produced a superb analysis on silver forecasting that the next objective for silver is $ 158 which corresponds with his $ 4,500 target for gold.

I have received numerous emails asking about silver. This article was prompted by a question enquiring what the silver price might be if my gold forecast of $4,500 proved to be correct.The question caused me to take a closer look at silver.

The reason why I have written very little about silver in the past was because the beautiful Elliott Wave (EW) symmetry and predictable relationships visible in gold were not to be found in silver. This article reveals a new EW discovery that proves that EW is alive and well and living in silver.
I first wrote about silver in December 2003 in an article titled “US Dollar Implosion – Part II”. The link to this article is at: http://www.gold-eagle.com/editorials_03/field120503.html. The brief piece on silver was tacked onto the end of that article. In view of its brevity, the 2003 silver piece is reproduced in full below: 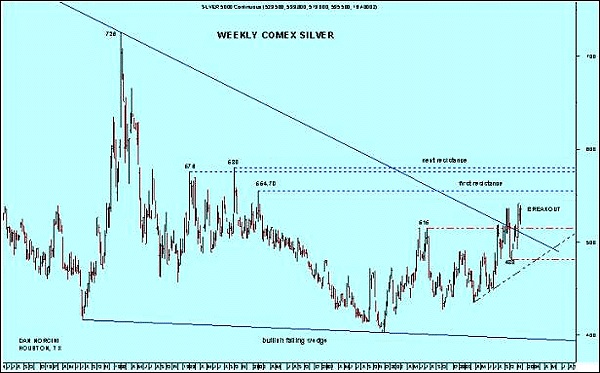 “In past crises, the wealthy protected themselves by purchasing gold and gold related assets. Ordinary people, by far the greater number, could rarely afford to buy gold. Being far cheaper, they previously had to buy silver. This metal became the poor man’s choice as an asset to protect their savings. Silver has so far lagged gold in the early stages of this bull market, but that situation seems about to change.”

“Throughout recorded history the average relationship between silver and gold has been 15oz silver to 1oz gold. The ratio at present is a far higher 75:1 ($400/$5.30). This is massively out of line. If gold were to double to $800 per oz, it would not be unreasonable to expect the silver/gold ratio to decline sharply, possibly as low as 40:1. With gold at $800, this would position silver at $20.

The above graph of the price of silver has been borrowed from an excellent recent article by Dan Norcini entitled “A Technical Look at Silver – Update”. What is quite clear from the graph is that silver’s 22-year bear market down trend has come to an end. As Dan Norcini says, a new bull market in silver has been born. It is difficult to argue against this contention and I have no intention of doing so. A silver price above $6.80 would complete a fabulous head-and-shoulders base formation. With this as a foundation, it would be possible to project a very large rise in the price of silver for the future.” – end of the December 2003 quotation.

The quick answer to the question of what the silver price will be when gold gets to $4,500 is to pick your favorite silver/gold ratio and divide it into $4500. The current ratio incidentally is about 51. If you choose the lowest ratio achieved since 2001 of 32 that would produce a silver price of around $140 ($4500 divided by 32).

This is not a satisfactory answer, so I decided to approach the Elliott Wave analysis of silver from a different angle. Instead of working upwards using the analysis of the minor waves, which was the technique used in the gold calculations, what if we worked backwards in silver starting with the larger waves?

Gold and silver tend to move in tandem, not in an exact synchronization, but enough to suggest that the Major waves of both metals should coincide from a time perspective. We know that in gold the Major ONE wave peaked in March 2008 at $1003 and that Major TWO declined to $680 in November 2008.

Silver also had a peak in March 2008 at $20.68 and declined to an important low of $8.77 in November 2008. If we assumed that the peak at $20.68 in March 2008 was the end of Major ONE and the decline to $8.77 the end of Major TWO, how would the various percentages work out? When I did these calculations I was astonished at the relationships and wave counts that emerged.

The chart below is the monthly spot silver price shown in log scale so that the percentage changes are visible. The bull market started in November 2001 at a price of $4.02. From that point to the suggested peak of Major ONE at $20.68 there are five clear waves visible, marked 1-2-3-4-5. The prices at the various turning points are also displayed. 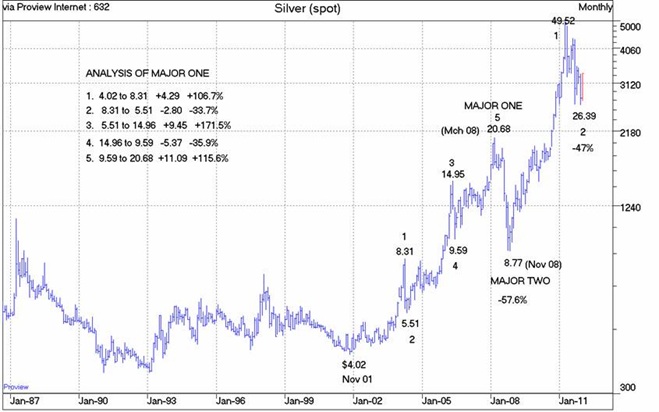 The analysis of the suggested Major ONE wave is set out in the body of the chart. The typical impulse wave relationships are immediately apparent. Both corrective waves 2 and 4 are similar (-33.7% and -35.9%). Whenever two corrective waves are similar it is a signal that they are part of the same larger wave structure. On its own, this fact would confirm that the 5 wave move from $4.02 to $20.68 was a complete wave of larger degree.

This is mind-blowing stuff for an analyst who did not believe that EW applied to silver!

We can now attempt to make some price forecasts. Silver, as with gold, is starting intermediate wave 3 of Major THREE, which should be the longest and strongest wave in the bull market. It should certainly be longer than intermediate wave 1 which was the gain from $8.77 to $49.52, or +464%, as shown above.

The gain in gold was forecast to be 200% for this move while the forecast rise in the silver price is 500%. Silver is again predicted to perform better than gold based on these EW calculations.

A word of caution is appropriate at this stage. All EW studies are based on probabilities. While the wave counts may provide a high degree of confidence in the forecasts, one cannot be 100% certain of any forecast. It is necessary to have a point at which it is obvious that the forecasts are wrong. In the case of this silver study, the line in the sand is at $26.00. If the silver price drops below $26.00 the odds are that the above calculations will not work out.

A further word of caution: silver is not for the faint hearted. Silver is considerably more volatile than gold and the corrections are much larger. Silver corrections can and do happen quickly. They are emotionally gut-wrenching and it is easy to get shaken out of one’s position near the bottom of a large correction.

Disclosure and Disclaimer Statement: The author has personal investments in gold and silver bullion, as well as in gold, silver, uranium and base metal mining shares. The author’s objective in writing this article is to interest potential investors in this subject to the point where they are encouraged to conduct their own further diligent research. Neither the information nor the opinions expressed should be construed as a solicitation to buy or sell any stock, currency or commodity. Investors are recommended to obtain the advice of a qualified investment advisor before entering into any transactions. The author has neither been paid nor received any other inducement to write this article.