Seldom in history are investment decisions self-evident. But today we have such a situation.

Gold is the only real and the only honest money. Gold reflects governments’ deceitful actions in destroying the value of paper money. For the last 100 years since the creation of the Fed and especially since 1971 when the US dollar was no longer backed by gold, paper currencies have been on a road to destruction. They have lost 97-99% since 1913 and around 80% since 1999.

In 2013 we will enter the final phase which eventually will lead to the total destruction of most paper currencies. The two principal factors leading to this are:

There is absolutely no chance that governments can or will stop the deficit spending. Any government even mentioning the word austerity will be thrown out very quickly. And even if serious austerity measures were attempted, they would just lead to a spiraling downturn of the economy creating even bigger deficits.

The consequences of the massive money printing that the world will experience will be:

So will these events happen in a long drawn-out fashion or will it all happen abruptly? Both the technical and fundamental setup we are seeing now makes it more likely that events will unravel quickly. The fragility of the world economy is greater than any time in history. Major nations such as Japan, USA, UK and most EU countries are bankrupt and living on borrowed time. And the banking system is only surviving due to false valuation of toxic assets. The situation is like an avalanche being triggered with that last snowflake being enough to set the whole thing off. The trigger could be anything from a dollar collapse, to Japan imploding or Greece exiting the EU. It doesn’t even have to be a major event due to the total instability of the world economy and financial system.

No one has any possibility to influence these inevitable consequences, neither governments or central banks nor individuals. The only measures that individuals can take are to protect their own assets and their family. For investors who are fortunate enough to have savings, the absolutely best way to protect wealth is to own physical gold (and possibly some silver) and to store it outside the banking system.

The case for gold as the ultimate wealth preservation investment is irrefutable. Whilst paper money and all assets that were financed by the credit bubble will collapse in real terms, gold will continue to represent stable purchasing power as it has done during 5,000 years.

For anyone who doubts what will happen to gold as government deficits surge and money printing accelerates, just look at the graph below. This shows US government debt against the price of gold. A chart of world central bank balance sheets exploding gives the same picture. And the picture tells us that a parabolic rise of debt and gold is likely to be next. This fits also with Alf Field’s technical projection that the next target is $4,500-$5,000 for gold. We could see that target already in 2013. 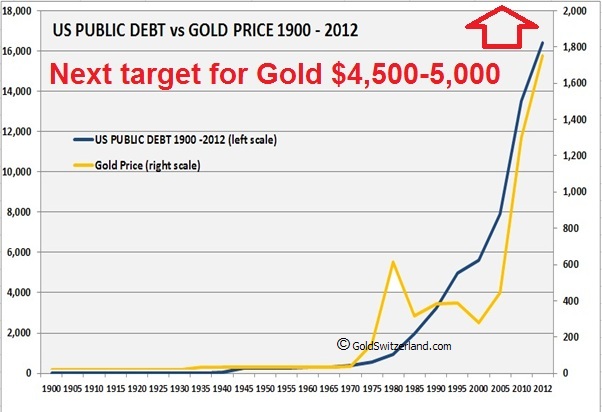 For anyone who believes that gold is overbought and overvalued – DON’T!  As I have already said, gold just reflects the other side of paper currency destruction and will continue to do so. We recommended up to 50% allocation to physical gold in 2002 at $300. Today we would see 50% as an absolute minimum. No other asset will give the same protection as gold.

So 2013 could be an Annus Horribilis for the world economy, the financial system, as well as socially and geopolitically. Everyone will be affected but being prepared and protected will make it easier to deal with.

Click here to listen to my latest KWN interview which deals with many of the points above.