Where the gold is going is certainly no secret. Whilst the West has not got a clue of the strategic significance of physical gold, the East’s accumulation of the yellow metal continues unabated.

Since 2008 just China and India have accumulated 26,000 tonnes of gold. That is a remarkable figure and virtually the total mine production for that period. There are many other Eastern countries which also continue to buy major quantities of gold such as Russia, Turkey, Iran and Thailand. 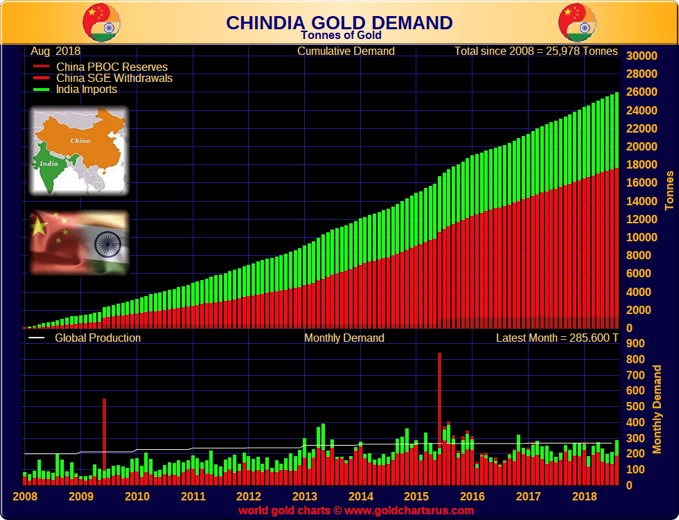 For decades most Western central banks have been reducing their holdings either by official selling, leasing or covertly disposing of their gold. The top 20 central bank holders of gold have officially a total of 29,000 tonnes. But it is doubtful that they even hold as much as 50% of that in physical form in their possession. 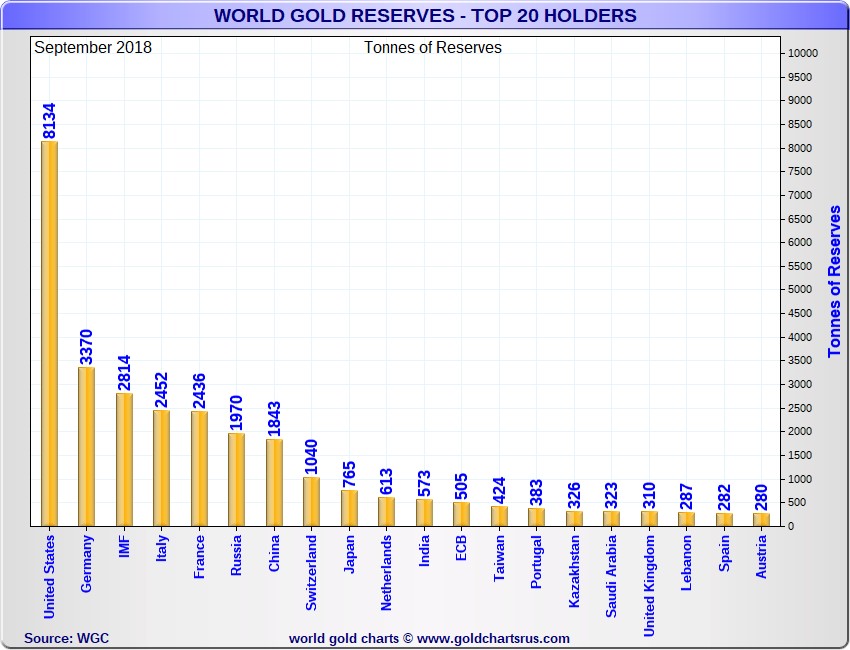 The US for example haven’t had a physical full audit since Eisenhower’s time in the 1950s. Therefore it is impossible to ascertain what the true holding is. But it would be surprising if the US actually has half of the 8,100 in an unencumbered physical form. If they haven’t sold it covertly, they have most likely leased a major percentage to the market through the bullion banks. That gold no longer stays in London and New York but is bought by China and India and shipped to these countries via Switzerland. The bullion banks then issue an IOU to the central banks which is only backed by paper since the physical will never return from Asia.

CENTRAL BANK GOLD COMING OUT OF LONDON AND NEW YORK

Last month Switzerland imported 92 tonnes of gold from the UK. We know of course that the UK is not a gold producing country. So these are 400 oz bars from UK bullion banks that are bought by Swiss refiners to break down into 1 kg bars and ship to China and India. The majority of the 33 tonnes that came from the US in September is also 400 oz bars from US bullion banks. Most of this UK and US gold is likely to come from central banks. 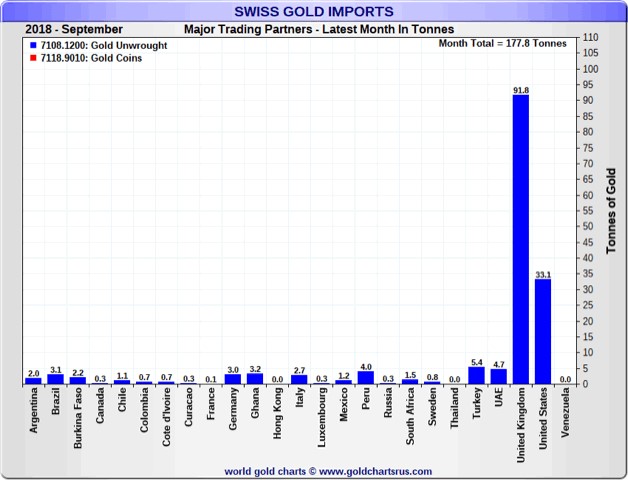 As regards the IMF 2,800 tonnes, a major part of that is probably double counted with the US and other central bank gold. Germany has repatriated some of their 3,400 tonnes of gold but 50% it is still held abroad with 1,250 tonnes in New York and 440 tonnes in London. Most of the German gold officially held in London and New York has most likely found its way to China and India too.

So not only does the Comex not even hold 1/100th of physical to back its paper gold but the bullion banks are in the same boat. And this is a boat full of worthless paper gold that will soon sink as the market discovers that there is a massive shortage of physical gold. At that point, it will be impossible to get a market price for gold as it will go “No Offer” which means that there is no gold offered at any price due to no availability of physical gold.

In a recent audio interview with Eric King of King World News, I cover some of the problems in the gold market as well as Chinese major appetite for the yellow metal.

This site uses cookies for analytics to improve your user experience. By continuing to browse this site, you agree to accept the use of cookies.
Cookie settingsI Agree
Manage consent

This website uses cookies to improve your experience while you navigate through the website. Out of these, the cookies that are categorized as necessary are stored on your browser as they are essential for the working of basic functionalities of the website. We also use third-party cookies that help us analyze and understand how you use this website. These cookies will be stored in your browser only with your consent. You also have the option to opt-out of these cookies. But opting out of some of these cookies may affect your browsing experience.
Necessary Always Enabled

Any cookies that may not be particularly necessary for the website to function and is used specifically to collect user personal data via analytics, ads, other embedded contents are termed as non-necessary cookies. It is mandatory to procure user consent prior to running these cookies on your website.