WHY GOLD WILL ERUPT

We have gold intervention, manipulation and suppression by governments, banks and hedge funds. We have a paper market in gold which is around 100 bigger than the physical market, facilitating this market intervention.

Governments dislike gold since it reveals their deceitful actions in destroying the value of paper money by printing unlimited amounts of it. The media don’t understand gold. Financial TV ridicules gold and even the most respected newspapers, like the FT, don’t appreciate that gold is money.

But in spite of all the adversity that gold has encountered in the last 12 years, the yellow metal has still appreciated over 6 times since 1999. And even with the major investment demand that we have seen in the last few years, only 1% of world financial assets are in gold.

So why is gold likely to erupt in the next few weeks?  After a strong move into late August 2011 we have had a correction/consolidation for almost 11 months. During this time, every single fundamental factor in the world economy has deteriorated. The Eurozone countries are in a complete mess and can never recover. The UK economy is in a terrible state but they are just lucky that they can print money which Eurozone countries can’t do. The same is the case with the US. Debts are increasing at an exponential rate and there is no attempt by government to stop the spending of money the country doesn’t have. Total debts and exposure in the US is approaching $500 trillion. This includes unfunded liabilities and derivatives. The latter are likely to become worthless when counterparty fails, something which is very likely to be the case. Most economic figures are deteriorating in the US. The US has had the fortune of all the focus being on Europe but that will soon change.

Japan has massive debts and the economy is extremely weak. And China with its major credit explosion will also suffer badly when the whole world stops buying their goods.

Sadly as I have been writing, only Deus ex Machina (EvG article Dec 2011) can save the world and this is an unlikely event. Governments will continue to apply the only method they know (with the blessing of economists like Paul Krugman and Martin Wolf) which is issuing unlimited amounts of worthless paper that they call money.  This is of course no solution and only adding insult to injury. But this is the only way that governments believe they can appease their voters. But in spite of the handouts in most European countries, governments are thrown out at every election by their people which is used to the its leaders taking care of them from cradle to grave. The free market economy exists no more but has turned into a socialist monstrosity based on paper. We are on the way to “The Dark Years Are Here” as I wrote in 2009.

A concerted (ECB, FED, IMF etc) money printing bonanza is likely to start in 2012. This will lead to all currencies collapsing in real terms. Collapsing currencies will lead to a hyperinflationary depression.  But many assets will deflate in real terms, especially the ones that were inflated by the credit bubble. This includes stocks, property and bonds as well as debt which have all been in a massive bubble for at least four decades. Gold will be a major beneficiary.

Gold will also appreciate because there is a total distrust in governments’ ability to govern. The more governments fail, the more they will want to control the system and the citizens and the more regulation they introduce.  There is also distrust in the financial system. Lehman, MF Global and PFG amongst others are only the very beginning of a serial collapse of banks and finance houses.

There is also distrust in a system that prints money with the beneficiaries primarily being bankers and the financial system. Bankers and banks keep failing and keep on being rewarded more for each time they fail. No banker is ever penalised for losing billions which the tax payers ultimately are responsible for.

There is a distrust in a financial system that manipulates most financial instruments to the benefit of the manipulators be it Libor, CDSs, other derivatives, stocks, gold/silver, gold/silver stocks etc.

The financial system is rotten in its core and bankrupt governments have no chance of saving it. But they can and will prolong the pain and suffering for the world by incurring even more debt that can never be repaid with normal money. This will guarantee the “final or total catastrophe of the currency system involved” (von Mises).

There is no precedent in history to what we are about to encounter. All crises or collapses in history have been limited to one country or region.  But this time we are looking at all major economies drowning in debt and decadence with no Deus ex Machina to save them.

For a world that has been used to governments handing out printed money every time there was a need we are about to have a horrible shock. Unemployment is already 25% in many countries (USA 23%) with youth unemployment in many areas at 50%. This will get a lot worse. But this time around there will be no government handouts. The social security system will collapse under its own weight and so will the pension system. Most pension plans worldwide are non-existent, unfunded or massively underfunded. Very few people will be able to rely on a pension and whatever is paid out will be worthless due to hyperinflation. The social and human effects of this will be horrendous and very long lasting.

For the relatively very few privileged individuals who have wealth to protect, gold will be one of the few assets that will maintain its purchasing power and reflect the destruction of paper money. But remember that gold must be held in physical form and stored outside the banking system. 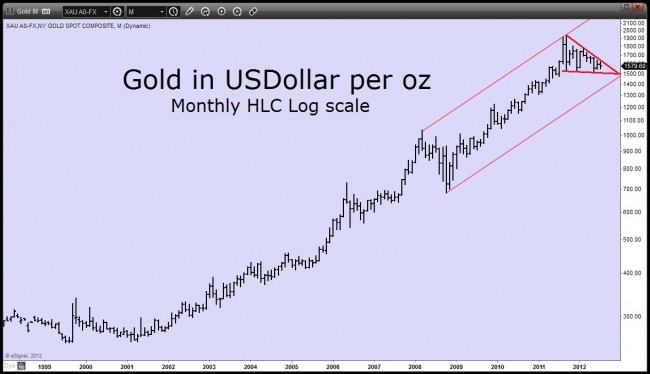 Click on chart to enlarge monthly Gold chart, click again to close.
This 8% correction in dollar terms since the monthly closing high is miniscule compared to the 615% rise. In most other currencies the correction is only around 3%. The minor consolidation in gold is likely to end soon. The next move could be explosive and take gold to $3,500 to $5,000 in the next 12-18 months. My long term target, set several years ago, that gold is likely to exceed $10,000 could be reached within the next 3-4 years.
(I expressed these views in an interview with Eric King of King World News on 15 July 2012)
Egon von Greyerz