Click HERE to see why billionaires invest in gold 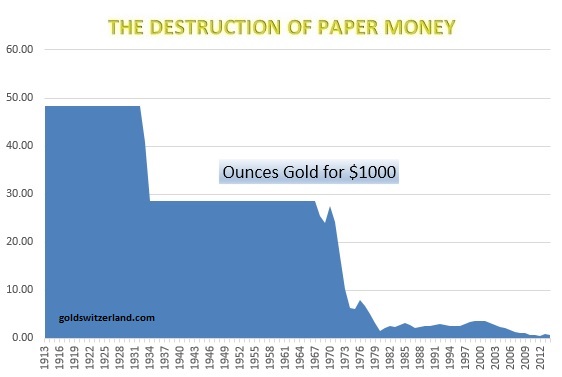 Gold is not an investment, it is real money
Gold reflects governments ongoing deceitful action in destroying the value of paper money.

Matterhorn Asset Management (MAM) has invested in physical gold for clients since 2001. We advised our investors at the time to buy physical gold for up to 50% of their financial assets. The image shows how in 1913 you could buy nearly 50 oz of gold for $1,000 and today only 0.75 oz. Thus against real money - GOLD - the dollar has declined 98% since the creation of the Federal Reserve Bank of New York in the USA in 1913. But it is not only the dollar that has declined in value, all major currencies have lost 97-99% against gold since 1913. Until 1971 the US dollar was backed by gold. Since Nixon abolished the gold backing, money printing started in earnest and in the last 41 years the dollar lost 98% in real terms.
An unstable financial systemclose

The world financial system is more fragile than ever in history. Never before has there been a time when most major nations simultaneously are running massive deficits and creating debts in the trillions of dollars. The banking system is also virtually bankrupt. If the bank's toxic debt was valued at market value, no bank would stand today. In addition the financial system has derivatives outstanding in excess of $1 quadrillion. An important percentage of these derivatives is worthless and there are no reserves to cover for the losses. The debts of governments and banks can never be repaid with normal money. Instead governments and central banks will need to create massive additional debt and print money at an accelerated rate. This will most certainly lead to a much higher gold price. 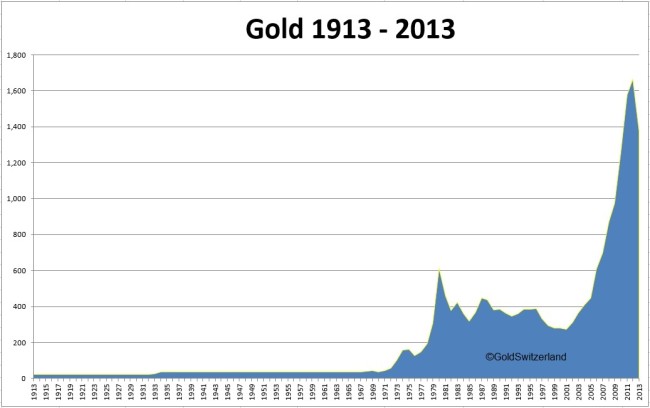 Gold is up almost 5 times in US dollars in the last 15 years (much more against many other currencies as of Q1 2015), and still only 1% of world financial assets are invested in gold. Thus very few investors have participated in this major appreciation of gold since the early 2000s whilst price risk in equities and fixed income is increasing. Gold has a very low volatility relationship with other asset classes which makes gold an important risk management asset in times of uncertainty. For Institutional portfolios a typical classic asset mix achieves a higher long term return with a percentage gold component depending on base currency (based on research going back to 1987). With likely further acceleration of money printing by the largest economies in the world, leading to further destruction of paper money, investors will become even more aware of the necessity to owning real money. Gold has been money for 5,000 years and maintained its purchasing power throughout history because it cannot be printed. Annual gold production of 2,600 tons represents only 1.5% of the total gold ever produced. Gold is both indestructible and indivisible which always made it suitable as 'safe haven' money. If physical gold does become an asset of choice for institutional investors and Family Offices, the physical market will not be able to meet that size of demand at current prices.

Currently the paper market in gold is at least 100 times greater than the physical market. Many investors are under the illusion that they own gold when all they have is a piece of paper with no physical gold backing. Gold dealers such as Comex, the interbank market, futures markets, many gold Exchange Traded Funds (ETFs), derivatives market etc would have no possibility of delivering physical gold against their paper commitments ("See Wealth Preservation").
Furthermore, it is unlikely that Central Banks own the 30,000 tons of gold they say they do. An important part of their stated holdings is likely to have been sold or leased to bullion banks. The US Government gold has not been audited since the 1950s and many other governments refuse to reveal in what country their gold is held. This is most likely because they don't actually own the physical gold that is on their balance sheet. We will soon be at a point when investors in paper gold realise that they need to take physical delivery in order to have the certainty of owning gold and eliminating counterparty risk. When that time arrives, there will not be enough gold around at current prices. Gold is then likely to appreciate very substantially due to massive shortages of physical gold.

There are times in history when protecting your wealth should be the primary objective of your investment strategy. As Mark Twain said: " I am more concerned about the return of my money than the return on my money". To preserve wealth in a fragile financial system, involves investing in assets which have no counterparty risk.