The massive explosion of wealth in the world could be a sign of general prosperity but that is certainly very far from the truth. The printed money and credit expansion has only benefited a very small minority. The gap between the rich and the poor is getting ever wider but it will soon shrink dramatically. 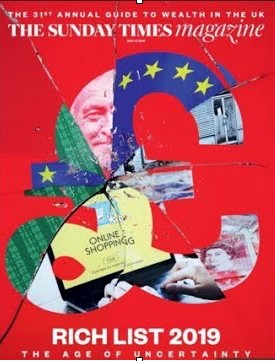 Neither the publisher of the list, nor a single one of the 1,000 wealthy UK individuals realise that in the next 5-10 years they will have lost on average at least 75-90% of their wealth in real terms. The world is about to experience the biggest wealth destruction in history which will destroy the artificial paper wealth that central banks have created. This will of course happen worldwide.

NONE OF THE WEALTHY OWNS GOLD 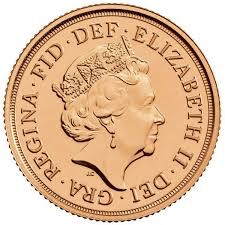 I can say with confidence that less than 0.5% (5 people) of the 1,000 in the UK Rich list have at least 5% of their wealth in physical gold. If the wealthy realised that their fortune is about to implode, as little as 10% in gold would most probably mean that their total wealth would be maintained as gold appreciates. Even better, if you are a British tax resident, is that there is no capital gains tax on Sovereign or Britannia gold coins. But hubris and ignorance will stop the investors from even thinking about gold as insurance of their wealth. Wealth preservation in the form of gold is a forgotten art.

SOCIALISM IN THE WEST WILL LEAD TO VENEZUELAN HYPERINFLATION

In the West, ordinary people’s standard of living has been maintained by increasing personal debt and also by governments running ever bigger deficits. These deficits are used for buying the votes of the average citizen to improve the perceived standard of living at the cost of an ever increasing national debt. Until the music has stopped, nobody worries about the fact that neither private nor government debt will ever be repaid.

Still, the vast differences in wealth will start to haunt governments once the economic recession and later depression starts and many people will not have sufficient means for food and housing. At that point, the government can only help the people with printed money. We just need to look at Venezuela to realise the consequences of that.

As I discussed in last week’s article, socialism works until you run out of other people’s money. This is what has happened in Venezuela. It clearly takes massive money printing and hyperinflation to prove to the socialist and MMT/Keynesian believers that flooding the market with useless pieces of paper that they call money does not create one iota of wealth. Instead it just exacerbates the misery of the people.

In Venezuela 87% of people are below the poverty line. There is not enough food or medicines and 5 million people will have left the country by the end of 2019 in order to try to survive.

That is what happens when a socialist/Marxist government runs a country into the ground, just as the US, UK socialists and other countries will do in the coming years.

Gold tells the truth better than anything else. The gold price in Venezuela in 1997 was Bolivar or VEF 150 per ounce. Today it is VEF 317 million! That is an increase of 211 million percent! 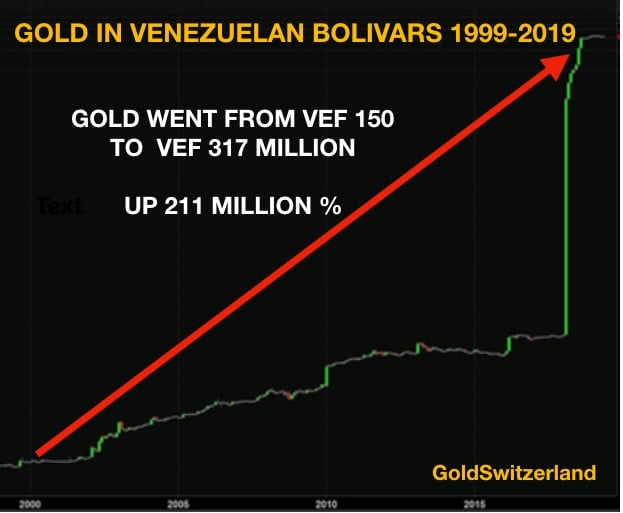 Global debt is at record levels of $250 trillion and total risk is $2 quadrillion, including derivatives and unfunded liabilities. The coming money printing and debasement of all major currencies could easily produce the same explosion in the gold price as in Venezuela.

An indisputable fact is that gold is the only money which has survived in history. But it is also true that a lot of investment assets have outperformed gold in the last 100 years. Massive money printing and credit expansion have worked wonders for investors in virtually any asset, be it stocks, bonds, property, or art. The problem for investors in these conventional assets is that the bubbles that have been created can only grow with more credit expansion. But we have now reached the point of diminishing or negative returns and the consequences will be just like in Venezuela.

COMING QE WILL HAVE NO POSITIVE EFFECT

As opposed to 2007-9, the coming money printing to save the financial system will have no positive effect. It will initially create a hyperinflationary depression and eventually a deflationary depression. The problem is that virtually no investor is prepared for this. Since central banks have saved the world for decades now, why won’t they succeed again. Well, for the simple reason that we have reached the point when the world can no longer be fooled by fake money and will soon collapse under the mountain of debt that hangs over it.

If we could all prosper by printing money, nobody would need to work and we could all live like in Shangri-La. So instead of utopia, the bursting of the biggest debt bubble in history will lead to dystopia for most of the world. But as I said last week, at some time this too shall pass.

WILL AI BE THE END OF HUMANITY? 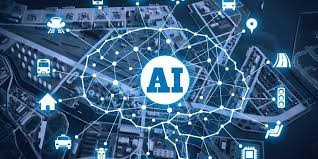 Many believe that AI (Artificial Intelligence) will create a boom with robots and machines doing all the work. In theory this would be possible but the consequences for mankind would be dire. The productive capacity would be owned by a small elite, similar to today. There would be no need for workers and thus there would be very few who would have money to buy the products that the robots produce. Thus, with no need for people, there would either be a massive natural reduction in the population or an orchestrated one. Governments could of course socialise the production machine or tax it heavily. That would lead to a failure of the AI system since socialism doesn’t work. More probably, the elite would control the government too.

In either case, it would be a dreadful world that only existed for a small minority. It would clearly fit into my prediction that world population will halve whether it is due to economic collapse, war, famine, or disease. This forecast is based on the explosion in population from 1 billion in 1850 to 7.5 billion today. Any spike of that nature, on a bigger sample, is always corrected by a spike down of at least 50%, at some point. There is of course the possibility that the human race is totally wiped out due to the above factors, whether it is war, disease or AI. Since no species has ever survived, the same destiny could fall on humanity.

GOLD INVESTORS HAVE HAD 7 LEAN YEARS

For many gold investors, the last few years have been testing. The gold investor/speculator is impatient and demands instant gratification. This kind of gold buyer holds gold for the wrong reasons and will probably get out before it goes up. The fact that gold has outperformed virtually all asset classes, including stocks, in this century is ignored by most investors.

Since our company deals exclusively with investors who hold gold for wealth preservation purposes, we see very few who are concerned. They know that gold and silver is essential insurance against the unprecedented risks in the financial system.

Many economic indicators are now deteriorating around the world such as exports, industrial production, car sales and housing. At the same time bad debts are increasing with for example US auto loan delinquency being the worst since 2010 and sub-prime corporate debt in the US worsening rapidly. The trade wars could easily end badly with very serious effects for world trade. Geopolitically, the Iran situation also looks very serious and the implications of a conflict there could be devastating for the world. Markets, including gold, totally ignore these risks. In my view, global risk is now at an extreme which clearly means that wealth protection should also be extreme.

INVESTORS SHOULD NOW BE OUT OF STOCKS

Stock markets around the world are giving different signals about the end of this secular bull market. Japan topped in 1989 and China in 2007. Markets like Germany, the UK and Canada also seem to have topped. There is still a chance that some stock markets, like in the US, will complete the bull market with a final hurrah to new highs. Personally I think that all markets look very vulnerable so the safest position is clearly to be out. Also, we must remember that markets all move in unison. So when one major market starts to fall, all markets will follow, leading to a bear market which could last a decade or longer.

Remember for example that after the 1966 top in the Dow, the market only decisively broke that top in 1982, 16 years later. After the 1929 Dow peak and the subsequent 90% fall, it took 25 years, until 1954, before the market reached the 1929 top. The economic conditions then were nowhere near as serious as today. Thus a 90% fall in real terms is certainly feasible with the market not recovering for a couple of decades.

The precious metals are finishing a correction to the downside. It could take a little bit longer and go down a bit further. But more likely is that the metals have now turned and that we are starting the most spectacular bull market in gold and silver in history. The move will be fuelled by worsening economic conditions, leading to massive money printing and currency debasement.

At some point the paper market in gold and silver will fail, leading to a panic and severe shortages to the point of no physical gold or silver being available. Much better to buy when the metals correct like currently rather than chasing them on the upside.